It’s every vintage fashion lover’s dream to stumble upon a piece of real vintage haute couture while out shopping. It sometimes happens: a friend of mine found a Schiaparelli jacket with signature quirky buttons on eBay, listed as a copy but definitely real, and Chanel jackets turn up from time to time. However, don’t just look out for the big names. There are designers who were treasured at the time but almost unheard of now. Bianca Mosca, Angele Delanghe, and Peter Russell for example, are all British designers who created beautiful, individual, hand-made clothing.

What to look for in vintage haute couture

It may be fun to look for a grand, sweeping ball gown as the ultimate expression of a couturier’s art. And you may be lucky enough to find one. But British couture, what with our climate and the practicalities of every day life, was particularly famed for tailoring. Two piece suits made from British wool were presented in collection after collection. Just as much as the more famous changes made in dress silhouettes from season to season, designers changed the details of their suit designs.

Regardless, a vintage haute couture suit will be immaculately made and finished. Look for a good quality fine wool fabric, lined in silk. The shoulders should be carefully shaped and padded, and interfacing will have been used on the inside.

Here are some little-known early 20th century British designers you might want to look out for. 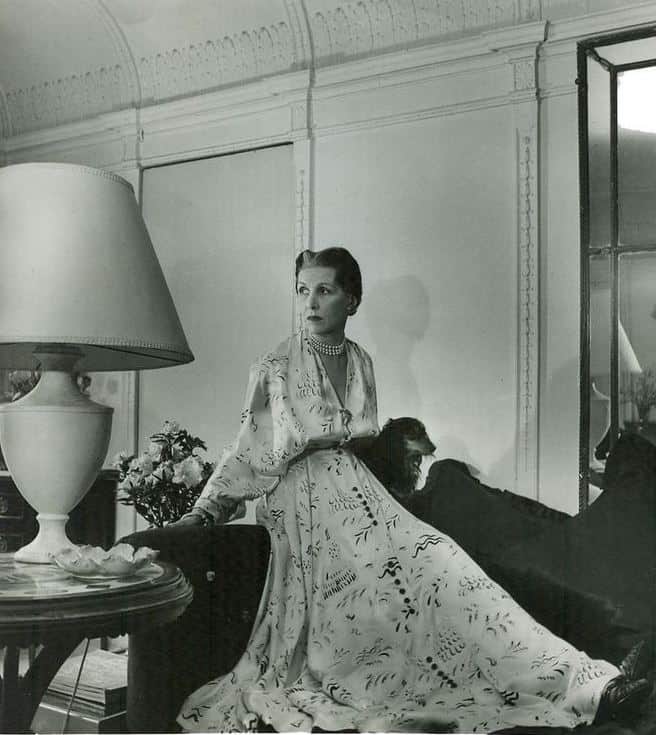 Bianca Mosca was Elsa Schiaparelli’s cousin. She got her start in managing one of her shops – The Schiap Shop. But she soon moved into designing herself. Her signature was bold printed fabrics. Her own label, Bianca Mosca, was launched in 1940 and her logo was a fly, the translation of her name. It only lasted nine years, until 1949. But during that time she designed for the British film industry, as well as star ballet dancer Margo Fonteyn and when Madge Garland became the first Fashion Professor at the Royal College of Art, she was photographed for Vogue wearing Bianca Mosca – a crisp black brocade suit.

Mosca herself was also featured in Vogue. In a 1949 story about women in fashion, she was pictured at home in her primrose yellow sitting room. She wore a rust and purple tweed suit in both horizontal and vertical stripes. Another picture showed her in a pink and black silk housecoat in heavy, billowing silk with a bold print of women and plants. It had clusters of black buttons down the front. She was a member of the prestigious Incorporated Society of London Fashion Designers, (IncSoc) which meant she was one of London’s top couturiers. As well as catwalk shows she licensed ready to wear. You may find a vintage haute couture or readymade piece by this designer. 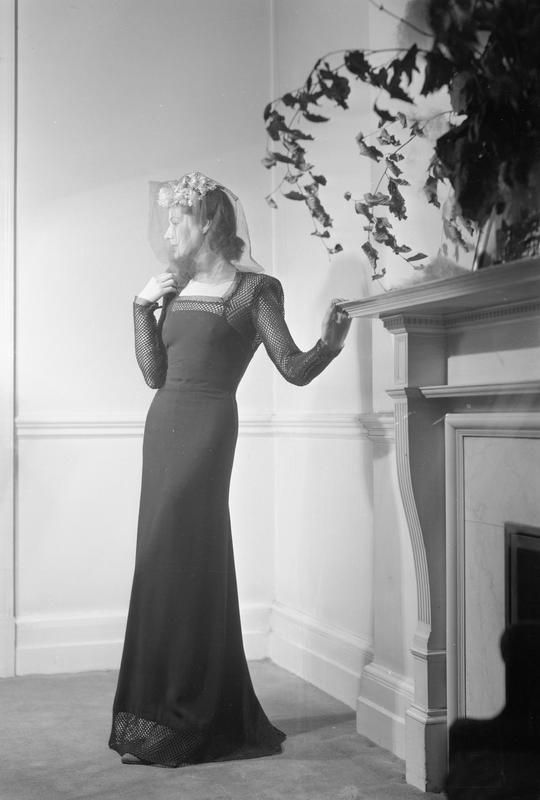 Peter Russell was a tempestuous figure in British design. British born (in Norfolk) he had been a rubber farmer in Malaya and a farm hand in Canada. His designs were incredible – full of innovations like complicated pleats, and unusual fabric including fishnet. His label, “Peter Russell of Peter’s Studio” was set up in 1930 and ran till 1952 in prestigious Mayfair addresses. But clients and investors, once taken in by his personal charm, deserted him for more even-tempered couturiers, possibly after an argument: he was known to be outspoken and highly strung.

He narrated his own catwalk shows, and not in a boring way either but describing each item that appeared quite excitedly, grabbing the models and turning them around to demonstrate certain points.

The Picture Post of 1950 shows “A tailored suit by British designer Peter Russell in a new colour called ‘Royal Violet’. The slim waist is accentuated by the soutache trimmed pockets.” The accompanying photo shows a neatly tailored suit, very dramatically enhanced by its large pockets with the ostentatious soutache on the hip area.

He was also a member of IncSoc, and had passionate opinions during their meetings. He moved to Australia, where his designs were very popular, then suddenly folded his business and moved home for his retirement. 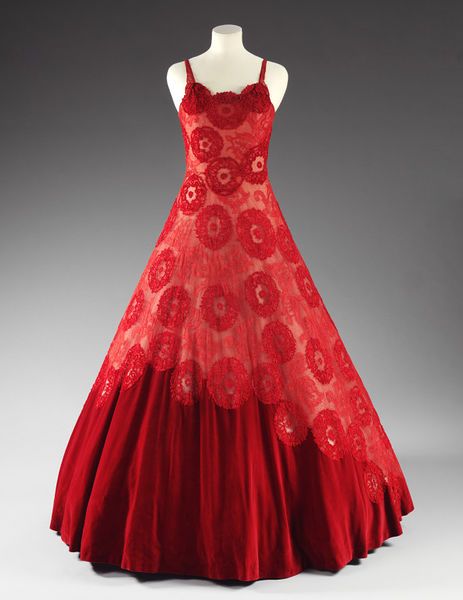 Angele Delanghe was born in Belgium but moved to England at the age of six as a refugee from the first world war. She had no possessions but her dolly and a tiny box of fabric scraps, which she used to make her dresses. She was trained and worked in Paris before setting up in business in England.

Her label was set up in 1939 and lasted until 1966. She was based in Kensington and Knightsbridge, was a member of IncSoc and eventually sold her label to Fortnum and Mason for a massive sum. She made beautiful, feminine dresses, designed for tiny hourglass shapes. Her interest lay in textiles, such as delicate handmade lace dyed scarlet, floaty chiffon with bold floral prints, or tartan rendered in fine silk.

In 1948, with almost ten years of successful trading under her belt, she was starting to struggle financially. She held her winter show at Fortnum’s and unexpectedly the store bought the whole collection. Then they came to her offering to buy the business, and install it as their in-house couturier. The price negotiated was eventually £15,000 – about half a million pounds today. She was to be in charge of furs and millinery as well as couture. She had her own loyal clients, but could now add royalty and celebrities to the list.

It was a ten-year contract but only five years later she broke it due to the pressure put on her by the store. She set up on her own again. All went well until the mid-sixties. Her work felt old-fashioned and she retired in 1966.