May 7, 2015
The sweater girl and Womens 1950s vintage tops are more commonly associated with the 1950s and it is correct to do so, as this is the decade in which it become most popular. However, the sweater girl started in the 40s with Jane Russell and Lana Turner.
It reached its zenith during the 50s but this was a short lived period, other looks lasted longer.

But the sweater girl look did provide the sweater with a makeover, and about time too, because until then, the sweater had been something your grandmother would wear while sweeping the doorstep outside.

Bright or dark colours, light or heavier fabrics, the tight sweater is good for summer or winter

Not so after the 50s, the sweater could be sexy, it just depended on how you wore it. Reinvented and redesigned, you wore the sweater over a bra that cinched your breasts and waist in the most peculiar fashion that were either bullet or cone shaped, giving the figure an hour glass feel that accentuated the breasts, waists and hips. 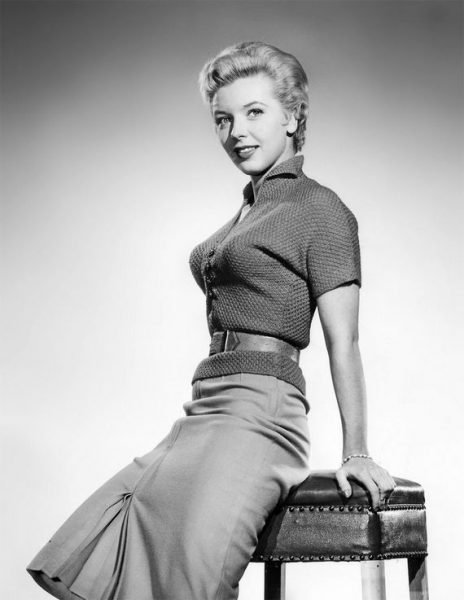 Jane Russell and a rather famous Western

This look first made its appearance in the early 1940s with Jane Russell. The look was intriguing, in that it sent out conflicting messages, with a veneer of wholesome all American girl on the outside, and a sensuous, sexy layer underneath.

With Womens 1950s vintage tops, sweaters were usually tight, to the waist and figure hugging, they were usually made from angora and cashmere for a really soft feel. 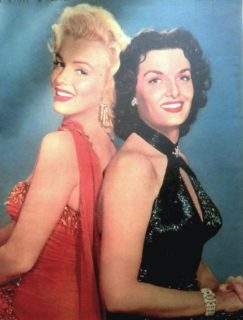 Jane Russell was soon joined by Marilyn Monroe, not only in the film Gentleman Prefer Blondes, but in the sweater girl line up. Remember the shot of Marilyn in a tight black sweater, white Capri pants and that platinum blonde hair swept back off her face? We can include Jayne Mansfield and Lana Turner in this sweater girl roll call.

The sweater girl look went as soon as it had come, but the conical bra would visit us in the 90s thanks to Jean Paul Gaultier.

You may love the idea of this type of sweater and there are plenty of retro versions out there.Only the 50s versions will have buttons up the back and fasten in that really sweet way 50s jumpers fastened.

No jumper fastens together in that way anymore, it’s reminiscent of the type of detail included in clothes back than that you simply don’t see anymore.

Also there are some simply exquisite versions of Womens 1950s vintage tops out there in angora and cashmere, that even if they don’t come with that type of fastening and just slip over your head, they’re still pretty special.

You can dress Womens 1950s vintage tops up or down your way. It doesn’t have to be a 50s vibe, it can be dressed up to create a more contemporary look and it doesn’t have to come with a conical bra either.

With Womens 1950s vintage tops You can accentuate your positives with a well-fitting push bra if you feel the need, but they can be worn simply with Capri pants, fitted trousers, palazzo pants or jeans. A skirt is just as good and a pair of cut-off jeans is even better.

Just do it your way and be your own sweater girl.