60s Vogue is a magazine that celebrates fashion. The fashion photography, reports on the collections, and glossy adverts, usually shot by the same photographer as the fashion spreads; these are the most important thing about Vogue. In between is some writing. The gnomic captions have always struck me as the abstract examples of the poet’s art: “Tonal dressing is an easy shortcut to composed cool – take Max Mara’s anorak as your starting point” is one of the commands this month.

But as well as the captions, there are actual, full blown articles. During its lifespan, Vogue articles have spanned form the intense – Virginia Woolf’s thoughts on “The Frock” springs to mind – to the vapid. However, in the 60s, the magazine had attained a measure of balance. The editorship had been recently taken over by Ailsa Garland, poached form the women’s pages of the Mirror newspaper. This undoubtedly accounts for the tone of the essays and articles from the period – accessible yet engaging and thoughtful, sometimes funny but not fluffy.

Garland decided to publish a selection in a book entitled “Rogue’s Gallery”. The date of the individual pieces is not given, which is a little bit frustrating. But as a guide, in her foreword, Garland states that they are “from the last few years.” It’s published in 1962, and she started as Vogue editor in 1960.

Vogue’s Gallery is full of beautiful work. There are short stories, poetry, travel articles, and features. There is also a scattering of photos of models like sixties beauty Jean Shrimpton,  by David Baily, naturally, and Irving Penn portraits. The authors chosen include Joyce Grenfell, WH Auden, Ted Hughes, Muriel Spark and Kingsley Amis. Reading them as a whole gives a very clear picture of post-war Britain. The after-effects of the war are often mentioned specifically, though glancingly.

In “A Drive in the Country”, by Arturo Vivante, a story about an older woman who takes a younger man for a drive in the countryside, with hopes for romance but ending in humiliation, her chauffeur is mentioned, driving faster than he ought to be. “The chauffeur was a frail and angelic looking boy who had been recommended to them by the refugee committee. He was one of the masses who had suffered from malnutrition during the war, and had spent two weeks at a sanatorium as a result.”

Gerald Hanley’s story, “After Retirement”, concerns a married couple with a symbolic impediment to their future happiness. They have a cat which can’t be left behind in India. They can’t take it with them back to Britain, either. “He was pulling at the straggly ends of his big war-time moustache (he had been a regular officer all his life and had had absolutely no need for the big moustache).” The reader of the time would recognise how pathetic the husband is, hanging onto the relic of his past all this time, staying in this country he was now free to leave, pretending it is their pet who is holding them back. In the end, the cat is shot, but one senses that the marriage is too.

In other pieces, details of every day life are mentioned that are utterly alien to us, 70 years later. Norman Levine’s “Ringa Ringa Rosie” is a short story about a writer who cannot support his growing family. They move to progressively worse and worse housing. “In the long back garden dead stalks mixed with new shoots. The grass was overgrown. The rhubarb was wild. There were weeds and two dead apple trees. The middle of the garden was a rubbish dump. And from the rubbish and from every other mound where previous tenants had emptied the lavatory bucket, giant nasturtiums with thick fleshy-white tubular stalks twisted magnificently up.” One gathers that previous tenants were slovenly, emptying the lavatory bucket in the garden. I’m glad we don’t have to deal with that particular problem now.

It is surprising how serious, and slightly bitter, these stories are. No happy endings here. But the travel stories tend to be lighter. Lord David Cecil writes in “One Man’s England”: “There is the flat Fenland stretching to the sea with here and there a magnificent church – Ely, Lincoln – sticking up against the sky like a ship; there is the North, the rugged Yorkshire moors of the Brontës, and the huge, sprawling industrial towns, black and ugly but pulsing with vitality; there is mysterious Cornwall at the toe of England, with its little paved fishing ports that have something French and foreign about them: there is Brighton, where against a background of florid Regency buildings, people gather in hordes for a noisy, jolly, inelegant seaside holiday.”

In the first paragraph he mentions a “two day drive” to get from one end of England to the other. These days, you can do it in eight hours. England is small, now, not a long journey. But some things do not change. “One reaches the House of Commons and enters the Chamber. How traditional and decorous the scene is there; the clerks in their wigs, the old fashioned phrases; “The noble Lord”, “the Honourable Gentleman”! Yet the whole effect is informal and club-like. Members lounge back in their seats with their feet up while a Minister is speaking; others are wandering in and out.”

Who knew that when Jacob Rees-Mogg was recently caught in exactly the same, incredibly disrespectful pose during a speech, he was merely following etiquette? This was before the age of TV cameras in the house, when what happened in the commons often stayed in the commons 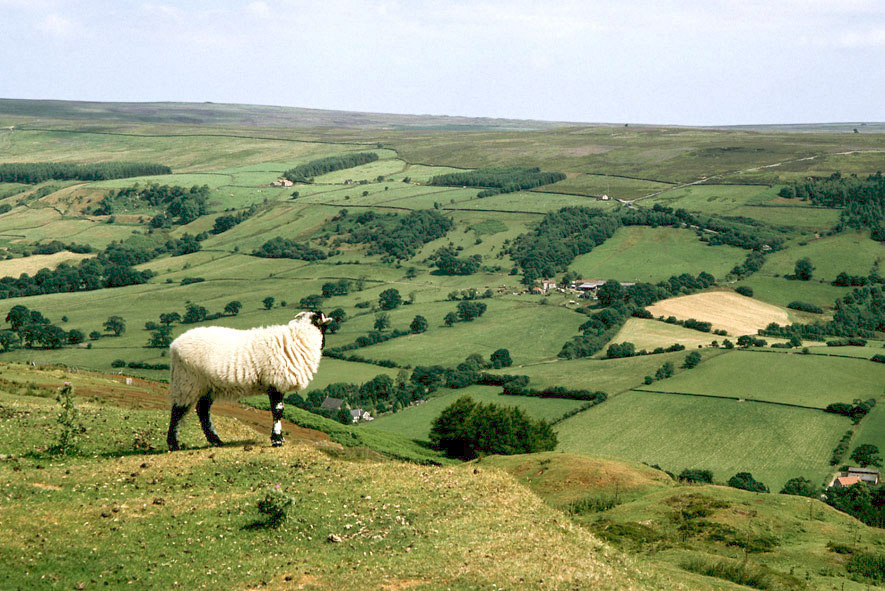 The Yorkshire Moors. Image via Wikimedia.

Storm Jameson, on “Yorkshire”: “The clear northern light sharpens every cleft in the hills, every lonely moor farm, grey village, quiet country town, port, cathedral city, ruined abbey, and great house; the Jacobean serenity of Temple Newsam, Vanbrugh’s oddly restless Castle Howard, or the blackened monument raised by a Victorian mill owner to his own glory. It is an old land: the Romans had trouble with its stubborn owners.”

Barbara Hepworth also spoke about the particular quality of Northern light and how it inspired her as a sculptor. It makes me want to revisit that place, and compare what has changed, more than half a century later. Not much, I suspect.