Henry Clarke is not such a famous name any more and yet his incredibly dynamic and colourful fashion photographs enlivened hundreds of pages of fashion magazines. He worked for Fémina, L’Album de Figaro and Harper’s Bazaar and the French, English and American editions of Vogue in the 50s, 60s and 70s. The photographs feature models like Suzy Parker, Ann Sainte Marie and Bettina and he captures them looking full of life. Anna Magnani, Coco Chanel, Sophia Loren and Maria Callas were featured in portraits by the American photographer in Paris.

1950s cotton print dresses with wide circle skirts on display in Storefront at Norrmalmstorg in Stockholm, 1957

Henry Clarke – The Spirit of the 60s 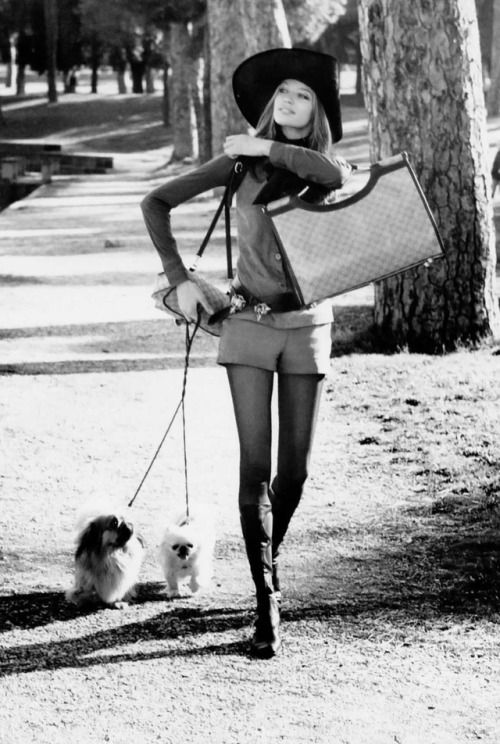 Verushka by Henry Clarke. Here she is seen struggling with two large Louis Vuitton bags, designed to emphasise her small frame, whilst walking in a Paris park. The dogs are confused. Image via Pinterest. 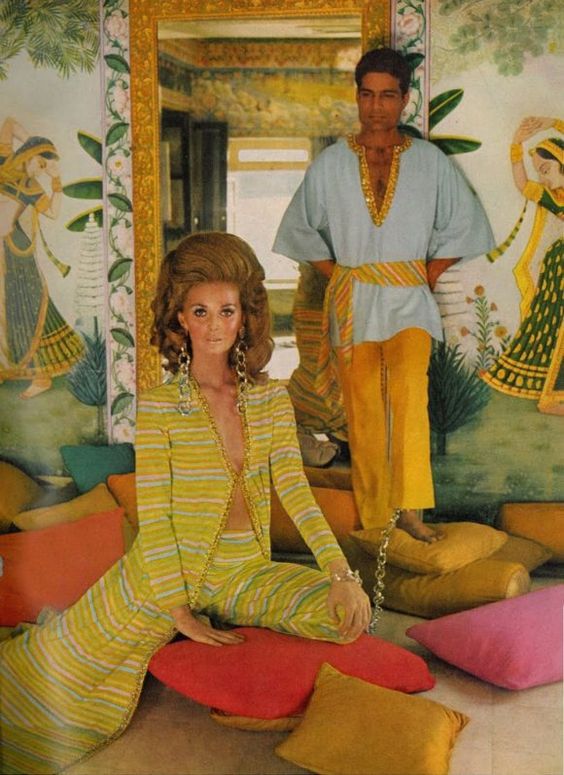 Colour photography by Henry Clarke. The colours echo the rich paintings on the walls and the chains from the man’s ankle to the woman’s wrist echo her chain earrings. Um, wait a minute? Colonialism at its finest. Image via Pinterest. 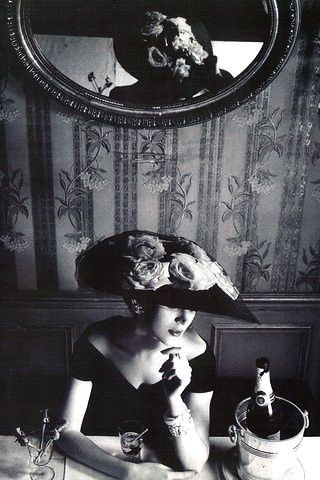 Storytelling by Henry Clarke. This is one of his older, black and white shots from the 1950s. The angle is unusual. Image via Pinterest. 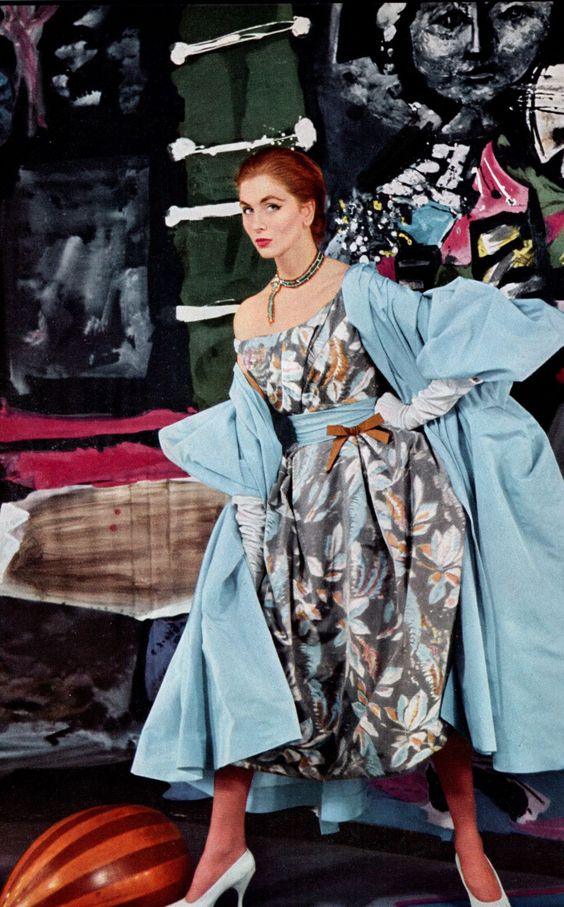 Dramatic photo by Henry Clark. The colours of this piece are very varied, yet it is not jarring. The model, Suzy Parker, is posed in front of a large piece of modern art with a lute abandoned on the floor. Image via Pinterest. 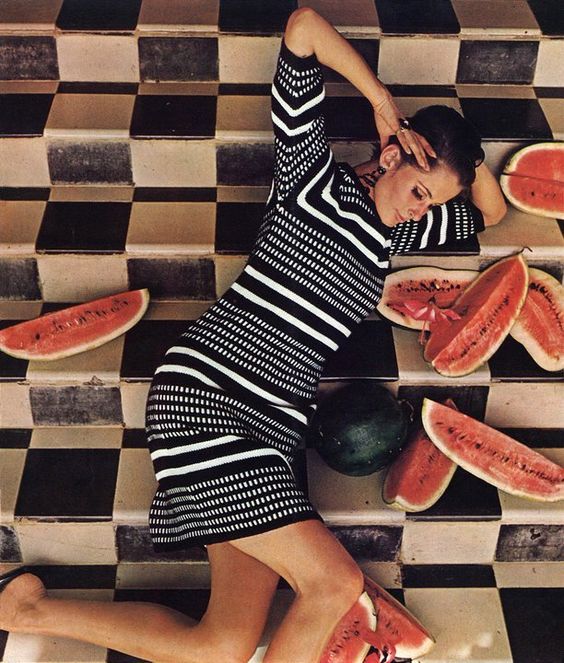 Great shot by Henry Clarke. The crisp black and white dress against the faded black and white tiles along with the pops of colour from the watermelons are great. Image via Pinterest.

Henry Clarke was born in Los Angeles in 1918. He moved to San Francisco in his 20s and got a job as a window dresser for a luxury goods and high fashion department store called I Magnin. In 1946, he moved to New York and found himself a job doing the backgrounds and accessories at Vogue’s photography studios.

This career path is very similar to the one that a slightly earlier Vogue photographer, John Rawlings, had also taken. He was also a window dresser who became a props assistant and from there, a master fashion photographer.

Anyway, working at Vogue at the time Henry Clark got his job were Cecil Beaton, Irving Penn and Horst P Horst. They all had wildly different styles and techniques. Cecil Beaton preferred a very theatrical set up, with soft lighting. Irving Penn’s work was very stark, with minimal props. And Horst P Horst created very stylised images, where women looked like sculptures. They needed a strong directional light. As well as these key photographers there were a plethora of others. Clarke worked with all of them, procuring and arranging the props they asked for. In a way, it was similar to his window arranging work, where the background was for the big San Franscico plate glass windows and the models were stationary dummies. But he was fascinated with the sheer range of artistic expression on show at Vogue.

Trained as a photographer

The New School for Social Research (by now called the New School) had been set up in 1919. It was a radically progressive adult education centre, even three decades later. The idea was that ordinary citizens could join and exchange ideas freely. They believed that graphic design and commercial photography were just as valid an art form as painting or drawing. Henry Clarke was lucky enough to get a place at the school, instructed by the legendary Alexey Brodovitch. He learned the technical aspects of photography, along with ideas of how to combine the high flown fantasy of fashion photography with the immediacy of photo journalism. He taught himself how to use a twin-lens Rolleiflex camera. They were portable, unlike the hefty studio cameras which the Vogue photographers usually used. This gave more flexibility, and the ability to shoot outside and on the street.

Henry Clarke left his job as an assistant and set up as a freelance photographer. In the beginning, he worked in black and white. His work was featured in the photographic magazine Kaleidoscope in the US.

Henry Clarke went to Paris, capital of fashion in 1949. Showing his portfolio to major fashion magazines there, he quickly got commissions. They loved his clean and dynamic “American” style. This was ironic because he had been taught by exiled Europeans who brought their new ideas to America. Femina, L’Album de Figaro and Harper’s Bazaar all published his fashion shots.

Vogue Paris commissioned Henry Clarke so many times that by the mid 50s, while still technically a freelancer, he was working just for them. They asked him to capture portraits to go alongside their features: Sophia Loren, Coco Chanel, Wallis Simpson, the Empress of Thailand and Maria Callas sat for him. In addition he was photographing the most glamorous models of his generation: Suzy Parker, Dorian Leigh and Bettina.

By the 60s, Diana Vreeland, Vogue’s editor in chief, askedHenry Clarke to consider a new kind of photography. She wanted exotic locations. Norman Parkinson had pioneered the idea of flying models, clothes, assistants and photographers out to countries more colourful than urban Paris or New York. And in the 60s the world travel bug was just getting started. “Travel Fashion” was hot. Henry Clarke and his team went to Syria, Iran, Jordan, India and Mexico. The flamboyant new fashions looked great against famous architectural and archeological sites around the world.

Henry Clarke carried on photographing right up until his death. He died in 1996 at the age of 77 of Leukaemia at his house in Cannes, France. He left his archives to the Musee de la Mode et du Costume in Paris, France. The Pasteur Institute was named as the beneficiary of his estate.