He spied for Britain, survived concentration camps, illustrated for Vogue, hung out with New York society and painted the Queen Mother. The charming and handsome Brian Stonehouse ‘s life was rarely boring. His fashion illustrations, which appeared in Vogue between 1952 and 1962 are assured, spare and lovely.

Brian Julian Warry Stonehouse was born in Torquay in the UK on 29thAugust 1918. When he was young his father, Thomas, moved his family which included his mother Bertha, known as Bertie, his older sister Marguerite, known as Margot, and his younger brother Dale to France to improve their financial situation. This meant that Brian grew up speaking French. Later they moved back to the UK again. 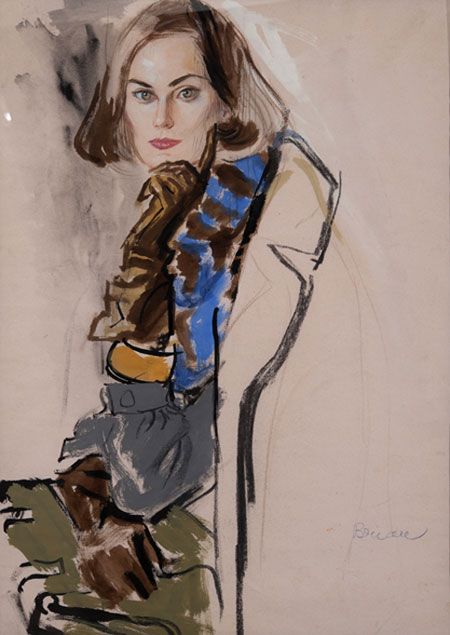 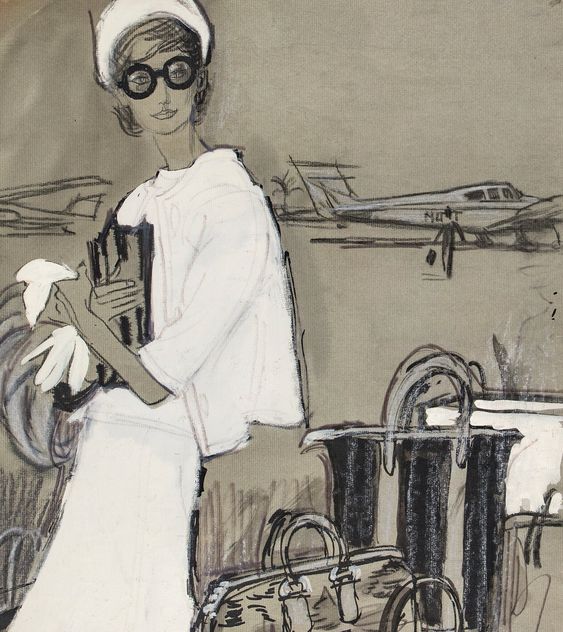 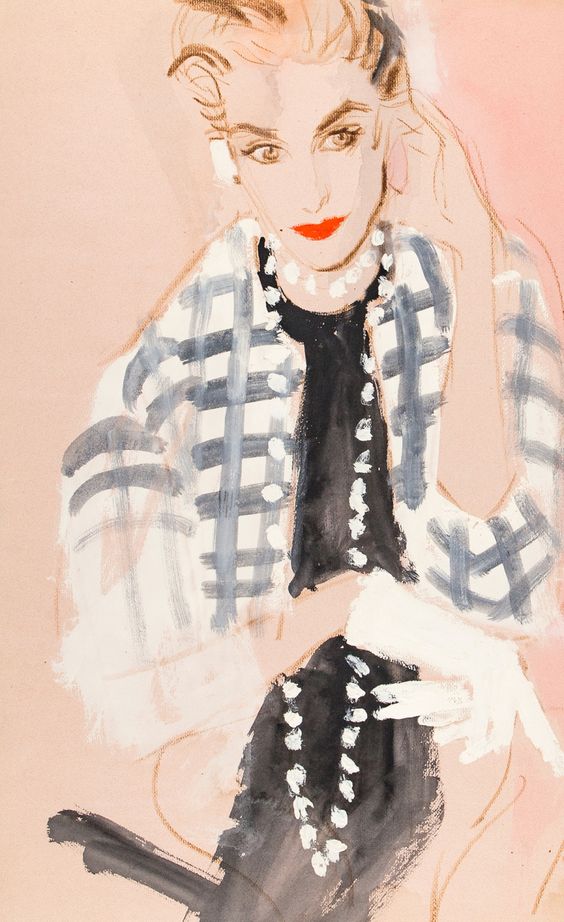 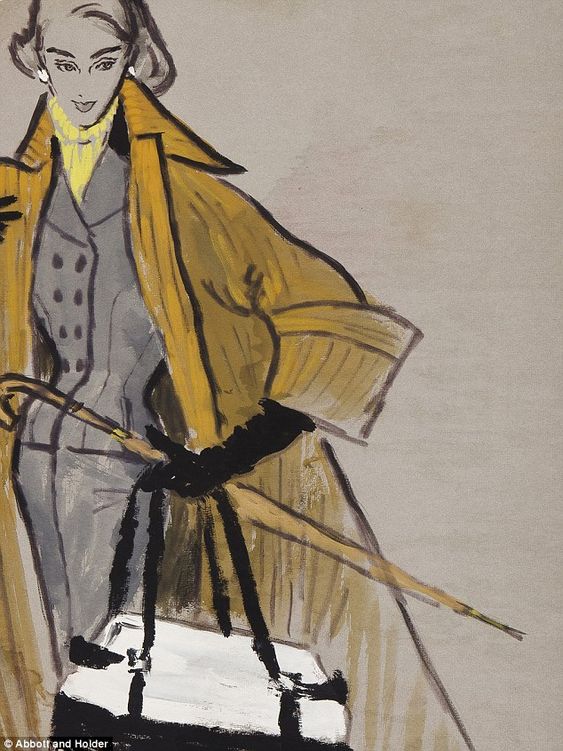 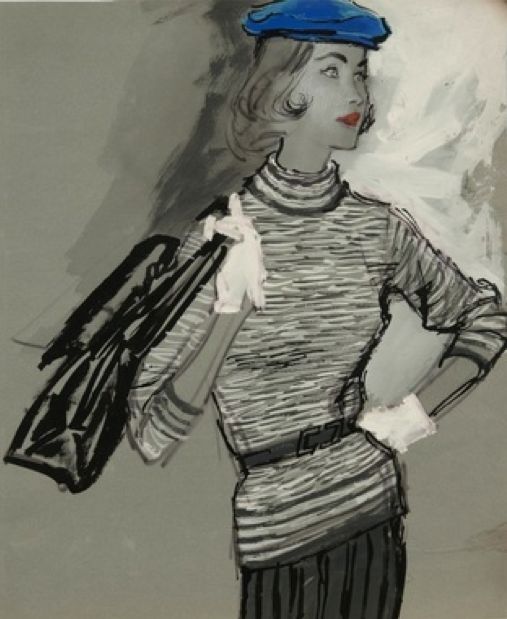 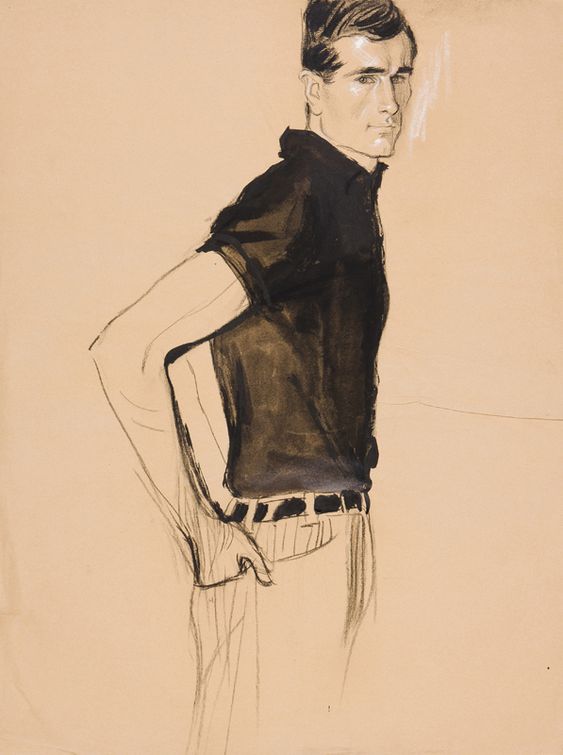 Brian Stonehouse enrolled in the Ipswich School of Art but didn’t get a chance to start his career as war broke out. He signed up and at first, during the phoney war, was rather bored. But then he was transferred to Scotland as a number of French troops had ended up there. Brian was needed as an interpreter. His fluency in French caught the attention of the Special Operations Executive SOE – the Spy Department. They needed Englishmen who could pass for native Frenchmen, to disrupt the Germans who had occupied France. Brian was given intensive, very difficult training. The subjects included unarmed combat, coding, wireless operator and just a few days (as opposed to the several weeks that was standard) of how to parachute. By the time he was trained, Brian had been promoted to the rank of Captain.

Having completed the training, Brian was given “French” clothes (expertly made by imitators at SOE headquarters), false documents and a radio to pass on messages disguised as a rather bulky paint box. Brian Stonehouse’s disguise was as an art student. He said that it wasn’t until he was in the plane flying to France that he suddenly thought to be scared of his mission – until then it seemed like a great adventure.

Brian Stonehouse wasn’t a good secret agent really. He tended to break into English in crowded places, and submit his radio reports in isolated ones. The Germans were great at triangulating frequencies, and so reports were supposed to be made from very busy places. In addition, the messages he sent weren’t well coded and were quite confusing. The people at headquarters receiving them joked that Brian should have stuck with his main talent of drawing.

Most SOE spies did not last long on French soil before being captured. This was the case for Brian. He worked for only a few weeks before being arrested and sent to Fresnes Prison.

Brian Stonehouse was kept in solitary confinement for ten months. He was interrogated by the Gestapo. On Christmas Eve 1942 he was informed he was to be shot as a spy.

But somehow, he wasn’t. Instead, he was transferred through five concentration camps. He was befriended by a group of other English officers, and they stuck together, putting on plays for and starring the other inmates.Brian Stonehouse also drew portraits of his friends, and the conditions inside the camps. At one, he drew the German officers and their wives in their fur coats, and in return they protected him and only gave him light work. But these light moments were only part of his experience, which was also truly horrendous.

Finally, in April 1945 he was released from Dachau when it was liberated.

Brian Stonehouse was quite unusual among those who had experienced concentration camps in that he really wanted to bear witness. He went back to Dachau on its liberation with is sketchbook on behalf of the British Army and drew it all, including the ovens still piled with bodies. He was a witness in war crimes trials and interviewed the perpetrators. One of the people he ended up interviewing was the Gestapo officer who had tortured him and told he he was to be shot. Brian apparently bore him no malice.

Brian Stonehouse also tried to interest publishers in a book about his experiences. They said it was good material but he should find a ghost-writer. He also appeared in a documentary made very shortly after the war.

Whilst working for the British Army as a witness he met Major Harry Haller. Harry was an American officer and when the work was over, now a civilian, Brian Stonehouse went to America as quickly as he could to be with him. The society columns reported on the arrival of the handsome and distinguished British captain. The two men moved in together in 1946.

Harry was from a rich family and he used his contacts to Brian Stonehouse’s advantage. He also found him wealthy sitters for portraits. He also got him an art exhibition, where he showed both his portraits and his sketches from the concentration camp. In 1956 Harry moved out, but the two men stayed in touch all their lives.

Brian Stonehouse now moved in an elevated society: his sitters liked him and he became friends and partied and dined with them. A particular friend was Afdera Fonda, the actor Henry Fonda’s wife whom he was often seen with. In 1952 one of his sitters introduced him to the editor of American Vogue. She loved his work. The newspapers reported that the “tall, handsome portrait painter” was the first new illustrator for a decade. He continued to illustrate articles for Vogue until 1962, when illustration was falling out of fashion. He also worked for advertisers like Elizabeth Arden.

He painted not only good portraits alongside his illustration work for Vogue, but also his own creative work. However, he couldn’t get an exhibition of these.

Brian Stonehouse – Back to the family home

In 1979 Brian Stonehouse moved back to England, living first in the family home in Stowmarket and settling in London a few years later. He was commissioned in 1981 by the members of the Special Forces Club to paint a portrait of Queen Elizabeth the Queen Mother, and through the sittings became a friend, often attending lunches at Clarence House.

Brian Stonehouse died on 2ndDecember 1988 of a heart attack.

His work being re-discovered many years later, a series of exhibitions of his fashion drawings was held at the Abbott and Holder Gallery in London annually from 2014 to 2017. His sketches from the concentration camp were donated to the Imperial War Museum.

Brian’s portrait of the Queen Mother