Alison Settle was a fashion journalist whose opinion could make or break a fashion designer’s reputation. She was the best-known fashion journalist in Britain in the 20th century – a Grande Dame a lot like a mid-century Anna Wintour. Like Wintour, she was the editor of Vogue for a long time, but she was also a writer too. She used her fame to talk not just about fashion but about women’s issues and rights, and she also worked towards good quality, affordable design for all levels of society through her relationships with manufacturers and designers.

Alison Settle wrote extremely wittily and fluently, and her career spanned over fifty years, beginning in the 1910s and ending in the 1970s. She held the coveted post of editor of Vogue for almost a decade, from 1926 to 1935. She was also fashion editor of the Observer for 23 years and wrote a fashion column for The Lady for 27 years.

Alison Settle also wrote two books on fashion and received an OBE for services to fashion too. She was appointed part of two government task forces on matters of British culture and taste, both the Council for Art & Industry and the Council of Industrial Design. In short, her whole life was dedicated to disseminating fashion and culture and she did so with great verve and an acute eye for style.

Alison Settle was born Alison Violet de Froidville Fuchs on the 18th January 1891 in Clapham, London. Her mother was Margaret (known as Maggie) Isabella Campbell Munro. Her father was Georg Friedrich Gotthilf Fuchs, and his job was Premier Lieutenant of the Landwehr – a captain in the Prussian army.

Via her father, Alison Settle was a descendant of descendant of the Central European aristocratic family Monod de Froideville. She had one younger brother, Harold Munro Fox (he anglicised the German name Fuchs), who later became a famed zoologist. Her parents separated when Alison was about ten years old. Maybe because of this, she spent some of her childhood living at her grandmother’s house in Brighton.

Alison Settle did well at school and when the time came to leave, applied for and was awarded a bursary to read History at Somerville College, at the University of Oxford. However, despite the bursary, the family couldn’t afford to keep her there. She took a secretarial course instead, and gradually moved into journalism.

In 1914 she became engaged. Her fiancée was a barrister named Alfred Towers Settle, and she married him four years later, in 1918. Together, they had two children, Margaret and John and moved to Sussex together. Alfred died of tuberculosis in 1925, just seven years after they were married. 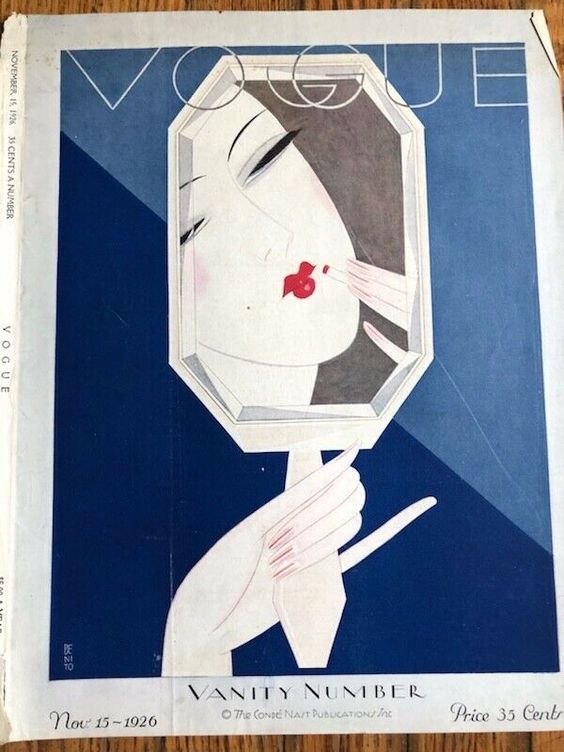 Vogue, 1926, when Alison Settle was editing the magazine. Image via Pinterest.

Alison Settle’s work in journalism supported the young family. Her first newspaper job was for the Sunday Pictorial in 1910. During the First World War she worked for the Belgian Fund. By the end of the 1920s she became a regular contributor to the Sunday Herald, Eve and The Daily Mirror.

In 1929, Alison Settle was appointed as editor of British Vogue. She was a great success with this, although she never got on with Vogue’s Editor in Chief, Edna Woolman-Chase, who was based in America and oversaw all three Vogue titles (British, American and French Vogue). Settle began to shape the magazine as an intelligent periodical for  women of all classes who were interested in design, culture and good writing as well as, or perhaps more than, photographs of dresses. She commissioned writers like Virginia Woolf, Edith Sitwell, Vita Sackville West and Colette.

There was writing on cookery from Marcel Boulestin and Andre Simon wrote about wine. She also initiated a regular feature which was called, rather stiffly, ‘Vogue’s Smart Fashions for Limited Incomes’. Since Vogue had never acknowledged before that its readers might be anything less than duchesses, this was quite a shocking concept for the magazine. However, after nine years, Settle’s radical ideas for Vogue became too much for Woolman-Chase. Their relationship grew so strained as they were so much at odds that Settle was forced to resign in 1935.

A Best Seller on Fashion

The next year, Alison Settle started working on her book, ‘The Clothesline’, which was published in 1937. She also became a consultant for the china manufacturer Wedgwood. Settle asked celebrity flower arranger Constance Spry to work alongside her in this. Together they devised promotional schemes, such as giving society hostesses free china, meaning they could then say that “Lady So-and-So is a big fan of Wedgwood”.

They also advised on the colours and shapes most likely to sell using Settle’s fashion forecasting skills. She told Wedgwood:  ‘You want to be leaders and not followers of taste; you have therefore got to let the public know that you have got these things slightly in advance of them knowing that they want them. The public do not know what their taste is until it has been visualised for them.’

When war broke out, she became a war correspondent based in Britain for the Observer newspaper. In 1944 she finally obtained permission from the War Office to go abroad, joining Lee Miller as one of the few women to report directly from conflict zones.

Lecturing on the Importance of Fashion

After the war, Settle gave lectures at art schools, promoting fashion as a career for women.

Post war, Settle co-founded the Women’s Press Club. She wrote for The Lady and Homes and Gardens and had a column for the Observer, initially about fashion but quickly diversifying into a range of subjects. They titled the column “From a Woman’s Viewpoint” at first, but soon it became “From Alison Settle’s Viewpoint”. She was a big name and could now use her position to investigate and campaign for many different subjects and issues which affected women.

Her passion lead to a health scare in the 1960s. Doctors suggested that she retire or at least limit herself to more sedate subjects. She didn’t retire but did change her column to the rather more sedate subject of beauty products.

Alison Settle – Fashion as a Career

In 1961 Alison Settle  was the first woman to be awarded an OBE for Services to Fashion Journalism. Alison Settle’s book Fashion As A Career was published in 1963. In the early 1970s, she had a serious accident. She retired from her regular column. However, she didn’t stop working and when she regained her strength she began work instead on a history of fashion.  It was never to be completed. Alison Settle died in Worthing, UK in the autumn of 1980. She was 89 years old.