John Rawlings was a mid century fashion photographer who created portraits of just about every star of the 1940s and 50s you can name, from all realms of culture. He photographed Salvador Dali and Marlene Dietrich as well as many fashion models in the latest works by Dior, Schiaparelli and Hartnell.

Starting as an unappreciated assistant to the famous Vogue photographers, John Rawlings learned to surpass his mentors with a huge body of stunning work. His photograph of Cecil Beaton, now in the National Portrait Gallery, captures a quiet dignity in the usually flamboyant fashionista. He also turned standard advertising commissions into photographs that were real works of art. 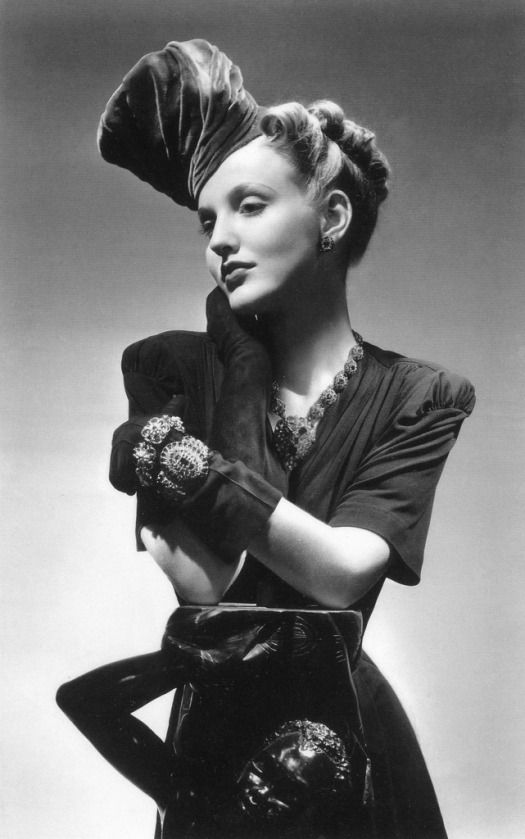 He used studio lighting to create an incredible chiaroscuro effect, so his models appeared like sculptures and every detail of their clothes, hats and jewellery was clear. These are some photos from the 1940s. 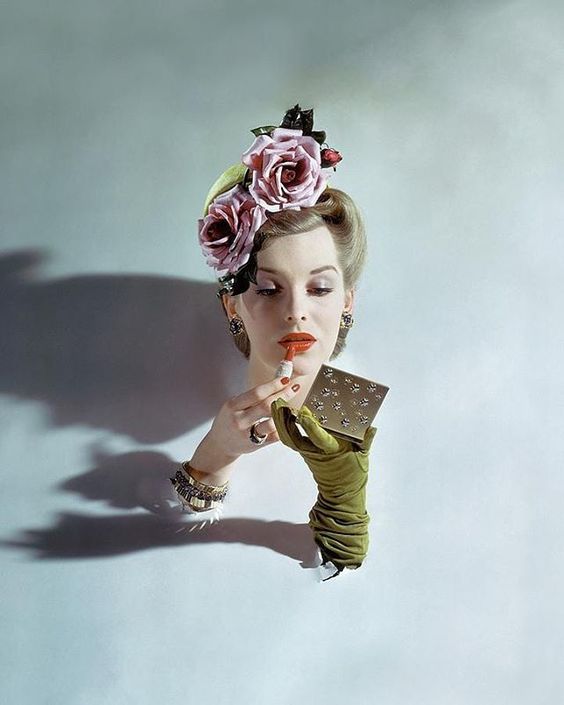 This effect was even stronger when, inspired by Surrealism, he experimented with isolating the model’s head and hands to lead to an effect like a disembodied shop dummy. 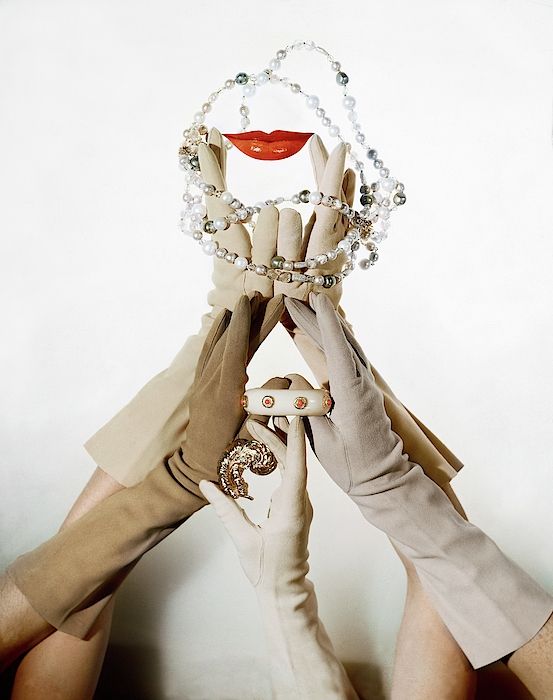 This process was taken to its logical conclusion by removing most of the model’s face entirely, leaving only a smile, like the Cheshire Cat. Eyes and lips were favourite Surrealist themes. They also adored dolls and shop mannequins. 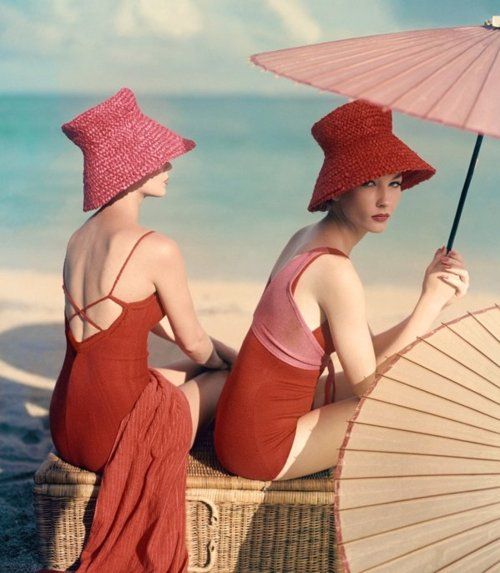 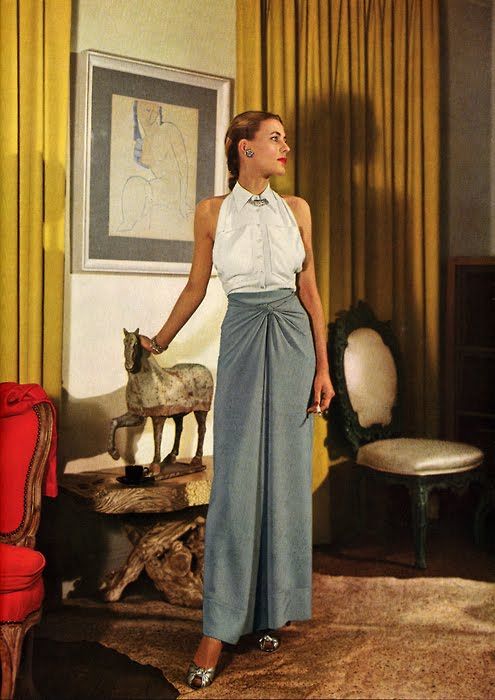 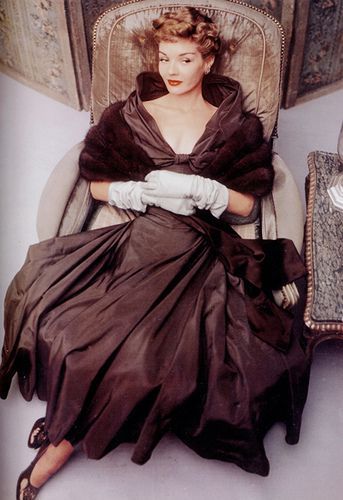 Born in 1912 in Ohio, USA, John Rawlings was university educated. As soon as he graduated, he moved to New York and became a freelance window dresser for big stores. This is an art discipline in its own right, and many great artist got their start doing this job. Salvador Dali and Andy Warhol were both window dressers. Crowds would come flocking around the windows of shops like Bonwit Teller and Saks 5th Avenue in those fairly early years of the concept of window shopping, or allowing customers to browse just for the fun of it with no real purchase in mind. Department store windows needed to be as alluring as possible, and so they hired artists to do it.

Proud of his work, John Rawlings bought a Leica camera to take photos of the displays he created. He added them to his portfolio and showed them to potential clients. Meeting the rich shop directors gave him a chance to take portraits of them. One of the subjects of his portraits loved it so much he showed his photo to Condé Nast. In 1936 Rawlings was called in for interview at American Vogue, and then hired as an apprentice photographer. He was to earn his pay using his talents as a prop builder and studio hand. He was required to be an assistant to whichever staff photographer needed him on the day.

In fact, he was so hard working and enthusiastic that it was only four months until he was promoted to first assistant to Horst P Horst and Cecil Beaton. He also had his first fashion photograph published in the magazine on 15th September, 1936.

The next year, Condé Nast and the editor of American Vogue, Edna Woolman Chase, decided to send John Rawlings over to UK Vogue. This was in order to give him a greater chance at success. Their own photographer’s roster was full and they didn’t really need a new one. However, he had a great talent and they didn’t want to waste it. There, he trained and worked until the early 1940s. He had the time and space to experiment, and developed a signature fashion photography studio style. It combined artificial and natural light, and the result was less still, less stuffy than before. It was much fresher, and became synonymous with a bright, all-American vibe.

The work was so beautiful that it also appeared in French Vogue. It made its way back over the ocean to American Vogue, too.

By 1937 Edna Woolman Chase became terminally fed up with the artistic pictures that her American team had begun producing. First of all she wrote a memo to the magazine as a whole, asking that artwork be clearer and show the details of the fashion more. Apparently this message didn’t get through because in 1938 she wrote another, directly to the photography department this time. “Several of the photographs for September fifteenth are nothing but black smudges. Concentrate completely on showing the dress, light it for this purpose and if that can’t be done with art then art be damned. Show the dress. This is an order straight from the boss’s mouth and will you please have it typed and hung in the studio”.

Back to the US

She loved the photos John Rawling was producing over in England and held him up as an example of beautiful but very clear work. Finally, in the early 1940s, she asked him to come back and work for American Vogue again. Thanks in part to the influx of European refugees, at that time New York was the centre for world culture. The artists from the old world taught and inspired those from the New, and the end of the world war made people determined to enjoy life again. In Manhattan photography was becoming a recognised art form, and commercial photography caught the wave too.

On the back of his success at Vogue, Rawlings was also asked to work on countless advertising campaigns. He took portraits of the celebrities who featured in the magazine. He also had the idea of dressing them in designer clothing, effectively using them as models for the brand.

Now established, John Rawlings actually began to clash with his own mentors, criticising them for their old fashioned way of working. They didn’t crop enough, they relied on the studio set up too much, they were too egotistical and took themselves too seriously…

But having an ego is very useful in any art. Although he created many, many works, and worked up to the end of the 1960s, John Rawlings’ name isn’t known like that of his contemporaries. It’s deserving of reconsideration though, as these photographs show. He left a significant body of work for reappraisal.