The Reality of Surreality in Fashion

One of the most significant developments of fashion between the wars was the emergence of what we call surrealism.  What is surrealism? If you ask the fine-art historian, they will point you in the direction of the painters, photographers and sculptors – the artists whose work goes behind glass, or on plinths, or is placed in frames, and is included in galleries, so that we know it is art.

Dali places a lobster on a telephone, and the art historians say that is art.

Dali paints a picture of a lobster, and the art historians say that is art.

Dali paints a picture of a lobster to go on a dress. The art historians ask: Is that art? 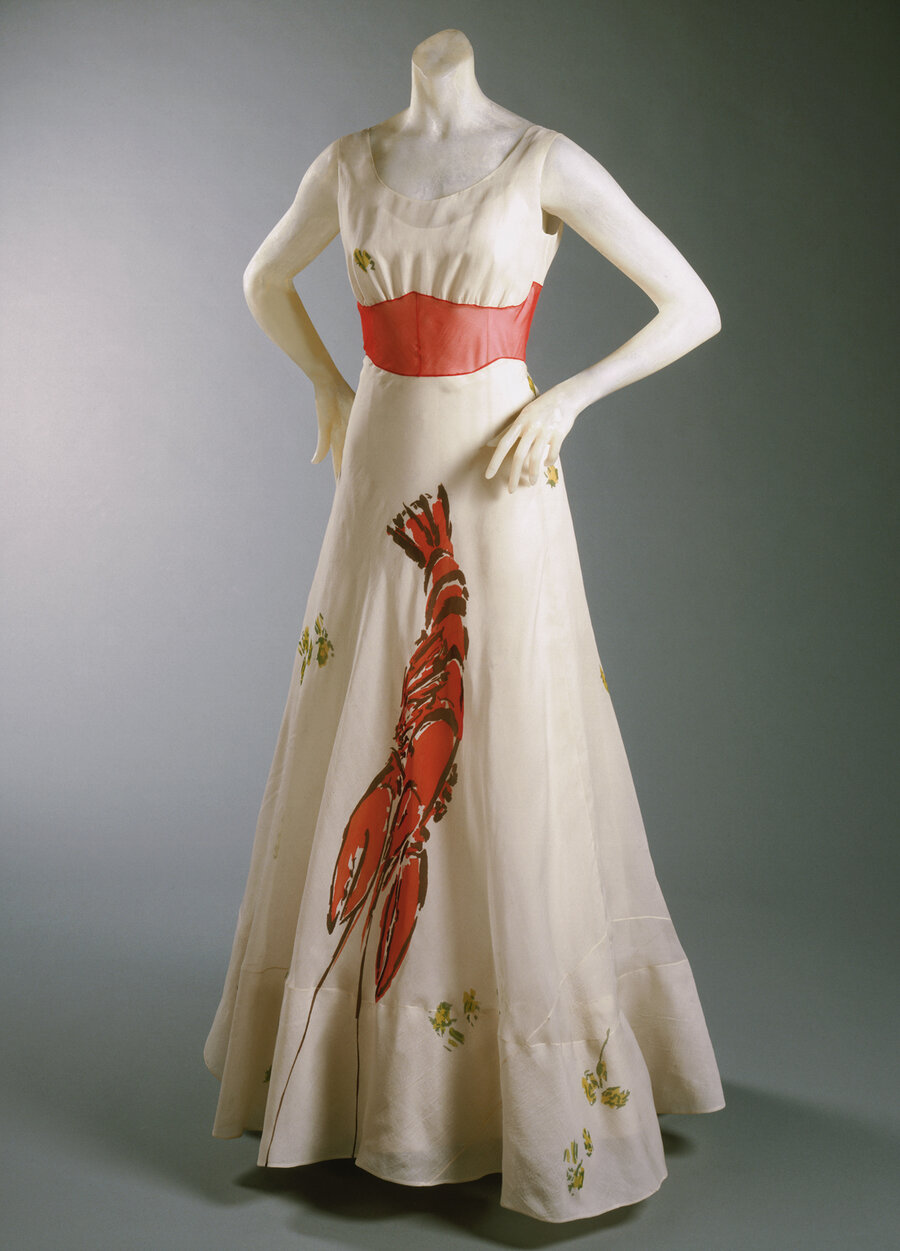 Surrealism, far from being an invention of 20th century artists, simply gives a name to something that the world of wearables has known since the very beginning. In Shakespeare’s Hamlet, there is a line:

“For the apparel oft proclaims the man”  – or, as it is often paraphrased – “Clothes make the man.”

This also means that clothes are used to present a person, and tell us how we should see them. This way of thinking is, and always has been surrealist, because it offers an alternative reality. Even nudity – the absence of clothing altogether – does this, as Schiaparelli herself grasped from an early stage. In her words:

“I remember, when I was so small I could hardly read, seeing a cartoon of two men bathing on a solitary beach. The started to talk, got along splendidly, and after sunning themselves for a long time went behind different rocks to dress. One came out all smartness with a dangling lorgnette and a silver stick; the other in rags. Stupefied, they looked at each other, and with a cold nod each turned and went his separate way. They had nothing more to say to one another.”

Surrealism in Fashion : Dali and Schiaparelli

Salvador Dali, Three Young Surrealist Women Holding in their Arms the Skins of an Orchestra (detail), 1936 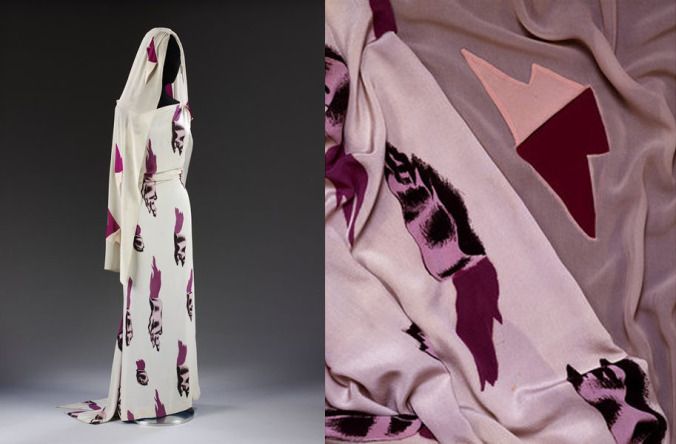 The relationship between nudity and fashion is a favourite theme of the Surrealist painters and sculptors, most famously in the works of Rene Magritte and Salvador Dali. In fact, one of Dali’s most famous collaborations with Schiaparelli is a direct riff on figures in his paintings who are simultaneously naked and gowned, the fabric of their flesh ripped and torn. This is the Tears Dress, presented in February 1938, where a skin-tight, clinging dress is printed with the illusion of the shredded body. The late Richard Martin said of the Tears Dress that its half-destroyed illusion was a response to the horrors of war and the savagery of world affairs, particularly the spread of Fascism. When we consider the Tears Dress, we may think of it as a surreal garment, because we do typically not see dresses that pretend to be damaged. But perhaps, in the fantastical world of fashion, what we are seeing is not surrealism, but stark realism, an acknowledgement of truth, particularly uncomfortable truths.

“Mary! Go and take off that thing directly! Pray, are you aware what a RIDICULOUS object you are?” from Punch, 1862. Image via Textile Ranger.

Let us consider the history of fashion and clothing. Almost since the beginning of records, constant messages have been:

“You will wear this.”

“You cannot wear that.”

Clothing can be controlled. Authority is not above using its power to control what other people wear. As we can see from history, governments have used sumptuary laws to try and forbid people from wearing clothes that were “too good” for them, or to control people’s self-expression. When it became clear that people simply ignored rules trying to control their clothing, the satirists came in to mock the trends and make fun of those who follow fashion. We see this in the Punch cartoon from 1862, where a fashionable maidservant is scolded by her modish employer, who, oblivious to her own absurd appearance, informs the girl that she is a “ridiculous object”. 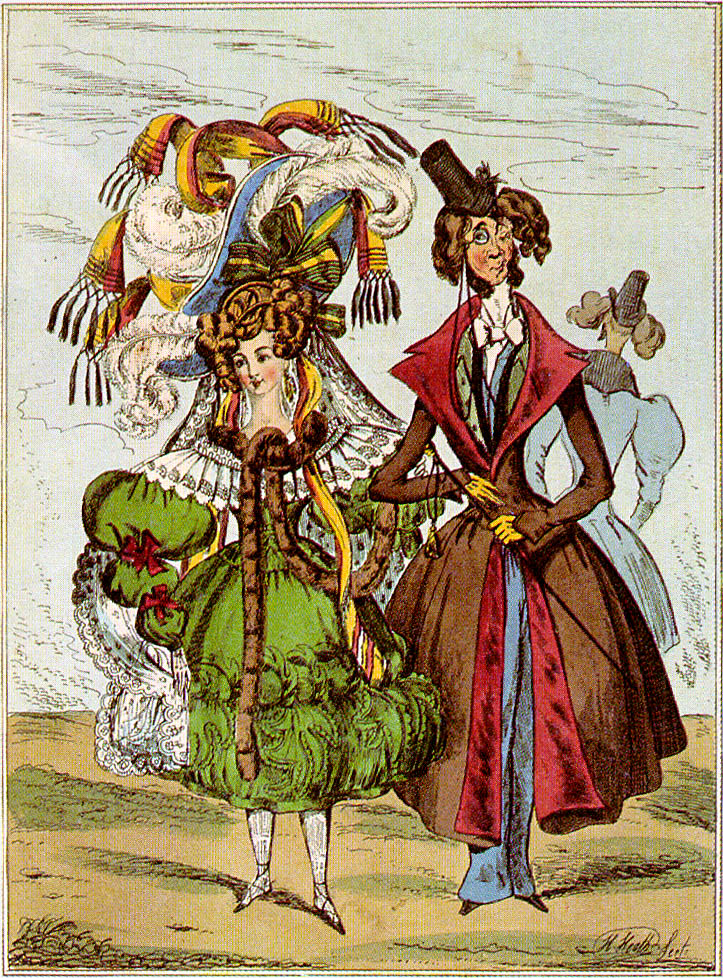 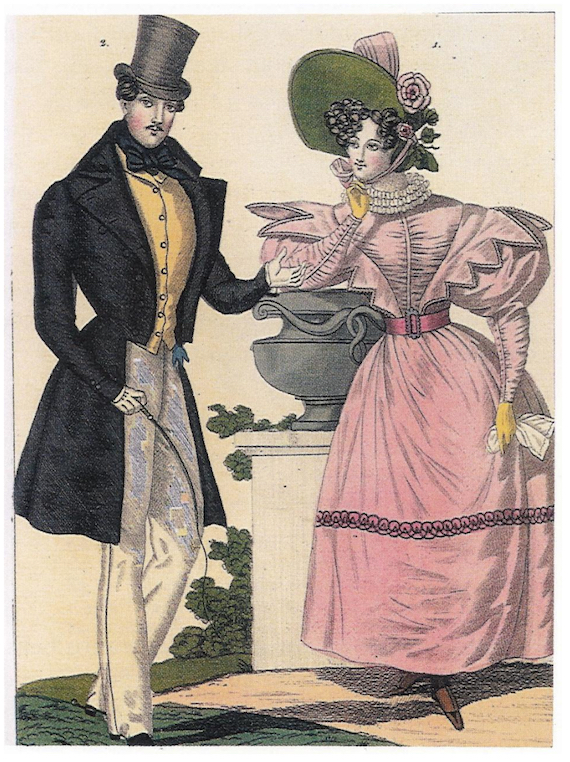 Popular media has had a long currency in making fun of fashion. Before the First World War, almost all people chose to wear clothing which met the approval of their world, whilst at the same time, being mocked by others. When we look at fashion satires, until recently, most of them make fun of real clothes which were actually worn, perhaps even by the satirist or their own close family. Here are two engravings from 1830, one satirical, the other a fashion plate. William Heath, who drew the caricature, understands the clothes of his time, which has enabled him to create a convincingly exaggerated and amusing parody.

This is something that a lot of 21st-century humorists have difficulty grasping. For these people “fashion” is something ridiculous with little relevance to what they themselves wear. They often do not see the humour in their own appearance, and resort instead to mocking and belittling others who do not look like themselves. It seems almost as if any divergence from accepted “normal” clothing is offensive. regardless of whether or not it is actually worn in the real world.

For example, here is a meme by an anonymous Internet user that I saw shared on social media well over 50 times. What REALLY went terribly wrong? Actually, the “1917” image shows actor Cary Grant in the 1940s, wearing standard everyday street wear – albeit top-quality. Also, the 2017 image is from a catwalk show. It does not reflect what people are really wearing on the modern street. It is a designer’s vision, something the person who put this meme together does not understand. You cannot compare a catwalk presentation to the reality of what is worn on the streets.

Fashion is called “costume”, “theatre,” “fancy-dress,” even “drag.” It is called surreal and fantasy, and we even try to call it unwearable, but more often than not, we are avoiding acknowledging the truth that is told by our clothes. When we are wearing clothes – and not letting the clothes wear us – we are presenting fundamental truths about ourselves. What others see when they look at us is simultaneously the reality of who we are, and the surrealism of how THEY see us. What we call surreal fashion is actually honest dressing. 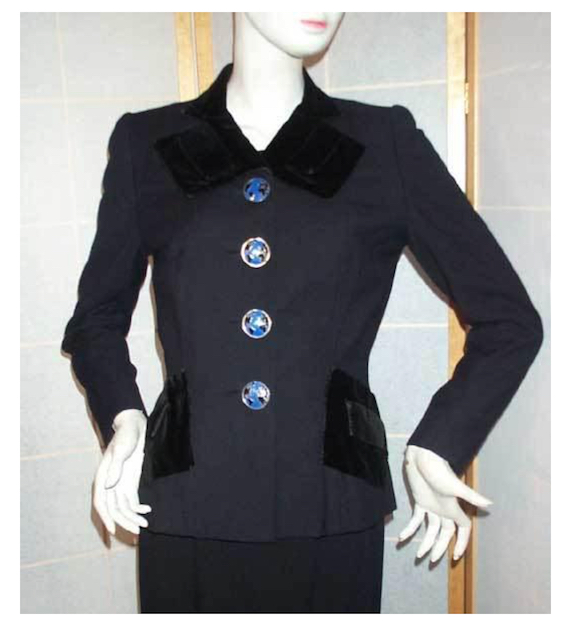 The piece I have here is a Schiaparelli jacket from my personal collection, made for the American market in 1940. The Second World War had just broken out, and at first glance, we see a perfectly tailored, smart black jacket. At second glance, we notice that the black and blue enamel buttons represent maps of the world. Schiaparelli herself said in accompanying publicity that these buttons represent a united, conflict-free world. As with so many of her designs, the silhouettes and lines are deceptively simple, allowing us to focus on the statements made by her buttons, prints and surface decorations. The woman who wore this jacket would not just be an elegant, well-dressed person, but a messenger for the designer’s plea for world peace. Or perhaps she just liked the buttons. And why not?

The legacy of Surrealism in fashion since the 1930s 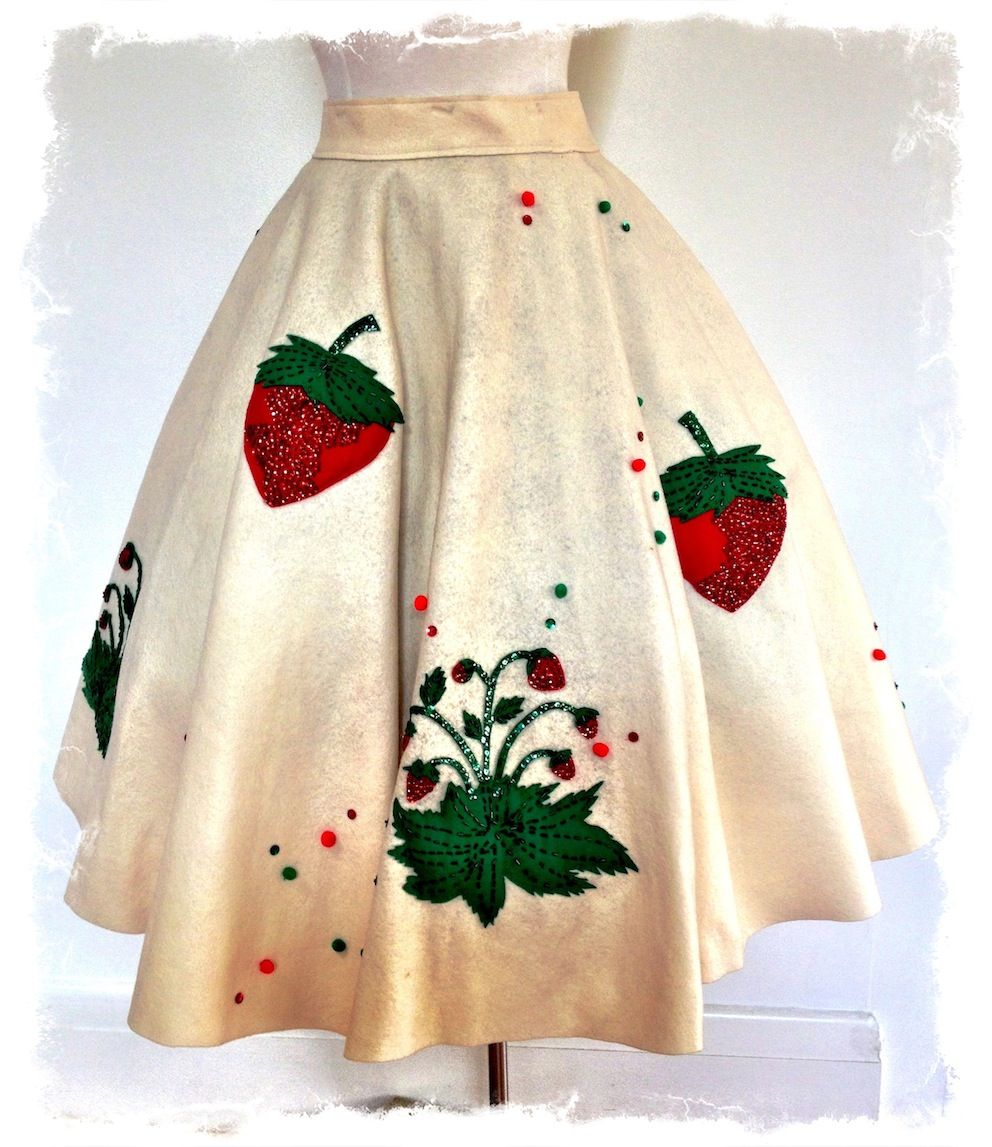 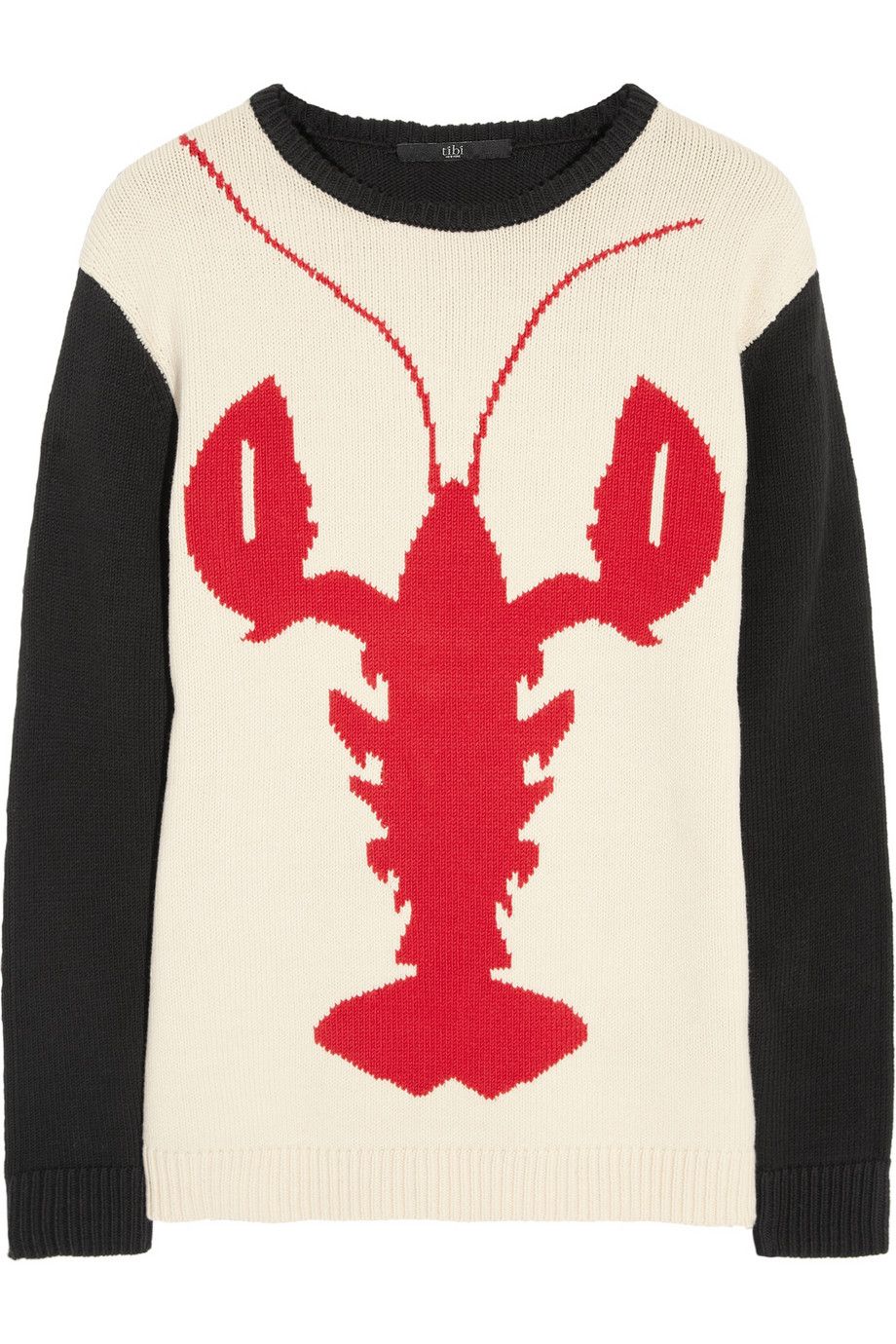 The legacy of Schiaparelli and her fellow surrealist designers, and so-called surrealism in fashion, in fact, was allowing wearers more freedom to be themselves. It gave us the freedom to enjoy clothes, to appreciate fun and unusual details – and to literally wear our heart on our sleeves.  The irony is that when we began to apply surrealism to clothing, what happened was that wearing surreal clothing instead became our personal truth. We achieved the freedom to dress as we really wanted. It allowed us to enjoy fun and unusual details. By the 1950s, novelty prints and accessories were the norm rather than the bizarre exception. Garments as ubiquitous today as slogan T-shirts and silly socks owe a great deal to the concept of “Surrealist fashion” – which in fact gave us the freedom to be real.

This text was originally written by Daniel Cottam-Milford for the CoBA event “The Model as Chimera:  Surrealism in Fashion ” held at the Serbian Embassy on April 19th. It is used with Daniel’s full and kind permission.