90s fashion is so in right now – so here are the top five mens 90s fashion styles you should know. They are easy to wear and easy to put together, for a no fuss look.

90s fashion for men was quirky and a little bit unconventional. Many people had very little money and so happily raided vintage stores to get a mis-matched, but charming style. They favourite plaid shirts, chunky sweaters, old band t-shirts, roomy jeans and maybe a little bit of makeup.

Unlike 80s styles, messy layering was in and though the usual style was a shirt open over a t-shirt with maybe a cardigan over that, the more daring might wear a pretty dress over their jeans instead. Actually, that went for girls too. However, this was more for rock stars and isn’t a part of the 90s revival I’ve seen on the catwalk lately.

90s hair could be coloured or bleached but it should look like you did it at home, and if you want to wear makeup it should look like you’re not very good at it. No point following today’s excellent make up boy’s you tube channels, they’re just too polished. For style inspiration, try looking towards Kurt Cobain, Dave Grohl, Brian Molko or Jarvis Cocker. Top 90s female style stars were Liv Tyler, Drew Barrymore, Rachel Green, and Jennifer Aniston.

Indie movies like Slackers and the Big Lebowski are great to watch to get inspiration, and just great to watch anyway. The Matrix was also huge in the 90s for its awe-inspiring special effects, but seriously, don’t watch that for fashion advice. Neither the bits where they wear leather trench coats nor the bits with holey jumpers and sad expressions are a great fashion statement.

Since the 90s have come back at the men’s fashion weeks, it’s a vintage fashion look you might want to try. Don’t worry, it’s very easy to wear and flattering. There’s no tight trousers that only suit the skinniest of figures, or bright colours that draw attention. Instead it’s a little bit of luxury in the shape of a velvet blazer, and a lot of practicality in the shape of sweaters and parkers.

Here’s my top five mens 90s fashion styles and how to wear them. The trick is not to go for a full look or you’ll seem like you’ve wandered off a film set. Just pick and choose elements you like and wear them as a twist. Our model, Josh, illustrates this perfectly as he sports a very fashionable beard, and is very well-groomed, which isn’t something most 90s men could boast of. 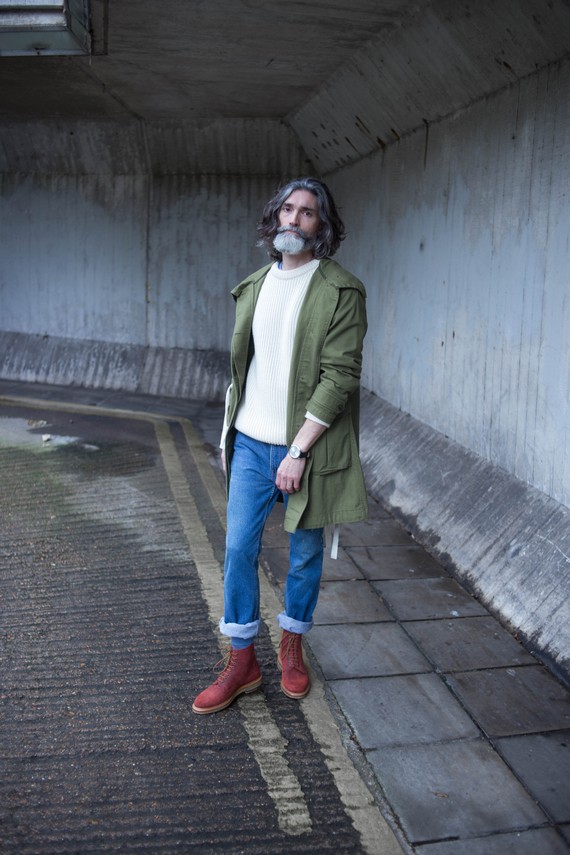 The classic that has rarely been out of fashion for urban men. The cut is high-waisted, and relaxed through the leg. The classic 90s wash is a mid-blue, but really however they come. The idea is that these jeans have been loved, worn and washed many times.

In the 90s these jeans were a kind of anti-fashion – they represented no particular style statement. They weren’t wide leg, like in the 70s, they weren’t bleached and patterned like fashion 80s fashion. They were just your average joe, comfortable jeans to pull on and go.

Now though, amid more contemporary skinny jeans and dark washes, these jeans stand out. Just a bit, and just enough to look stylish. They are still as comfortable as ever. Roll up the hems for a modern touch like Josh does. 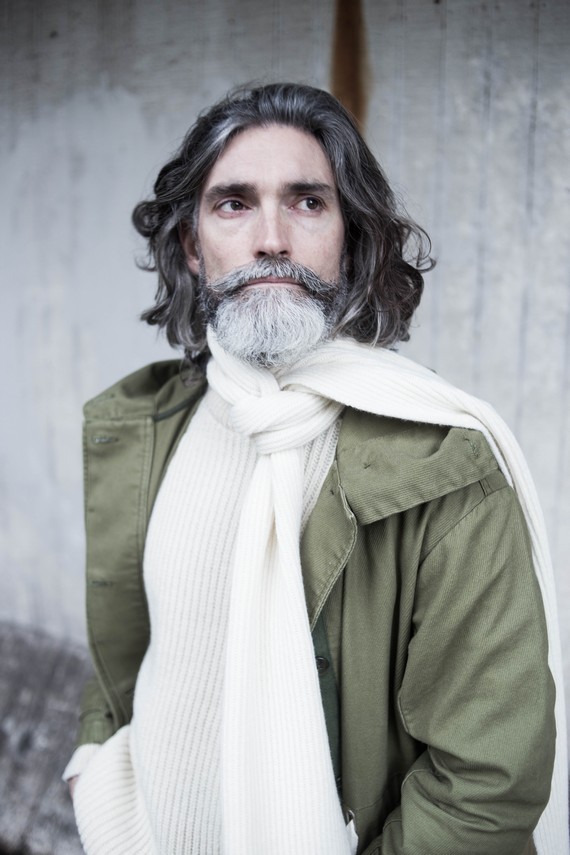 A classic 90s outfit was often bought at a vintage store. That’s where, if you’re smart, you’ll shop for a cosy white sweater. Josh models a simple chunky white rib one here. You might have noticed the trend for Norwegian or Fisherman style sweaters, and this is an excellent example.

Bought new, these tops can be very pricy but in a vintage store they are inexpensive. For 90s style, pair it like Josh with your 501s, and just a t-shirt or nothing underneath. 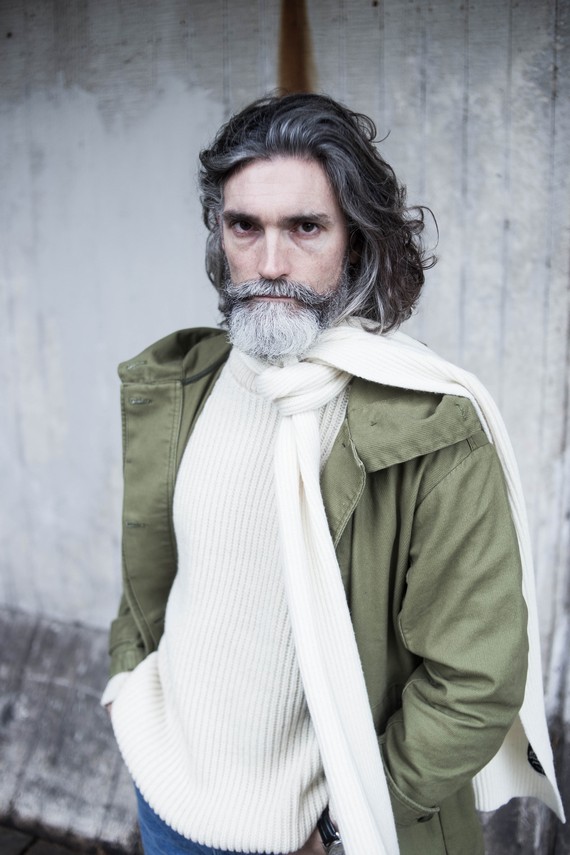 Who can forget the Blur vs Oasis battle of the 90s? Both of these bands claimed to be alternative. But both had thousands of fans and ranked highly in the pop charts. And both bands had a favourite jacket – the parker. Olive green for preference, it was part of their lad’s uniform. Last time I saw lead singer Noel Gallagher on stage he was still wearing his.

The parker also has a longer urban fashion pedigree than just the 90s. The highly stylish Mods of the 1960s, a style and culture tribe who famously fought with their rivals, the Rockers, also wore green parkers. In fact, Noel Gallagher really liked Mod styles, sporting a bowl haircut and sideburns in the 90s as a revival. So that’s where the 90s popularity came from.

Whatever their genesis, parkers are a fashion outfit that is lightweight, will keep the rain off and look good. 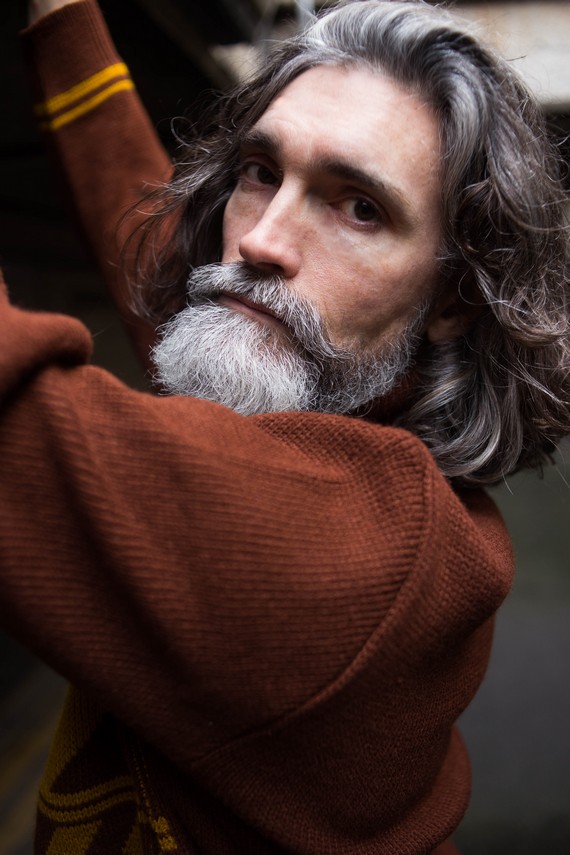 This is definitely a look you want to go to the vintage shop for. This brown and yellow roll neck with its distinctive pattern is something for your 90s party, but also every day. It is really playing into the trend for oversized woolly jumpers.

Men fashion is often about practical, wearable items with a twist like an unusual print, pattern or colour way that sets the clothing apart from the crowd and this really fits the bill. 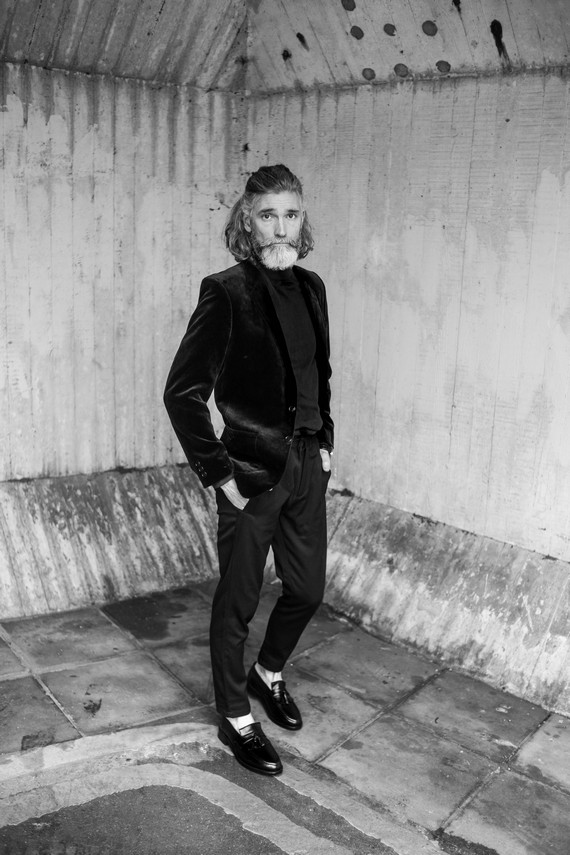 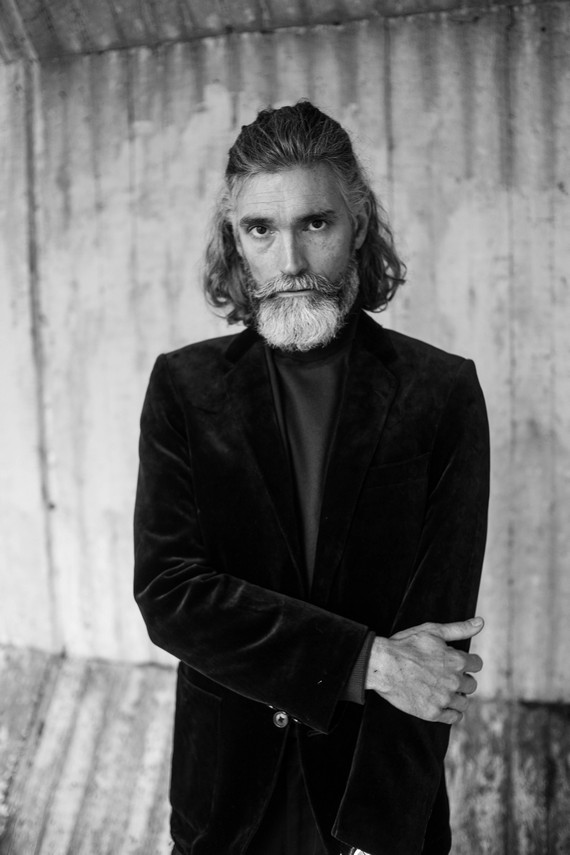 The velvet blazer is one of my very favourite men’s party outfits. It can be styled very simply, with a black roll neck and black dress trousers. Wear dress loafers, as Josh does here, (no socks though!) or if you really want to make for proper Mens 90s fashion styles, try black Dr Martens.

Finally, 90s style is about relaxing, mix and matching, and having fun. So go have fun!
Clothes – Blue17 vintage
Images credits – M-RGAN Photography

How To Style Your 90s Mens Shoes

How to style your 90s jazzy shirt for all occasions