A haberdasher’s shop is the most beautiful place in the world. Forget a holiday in the Seychelles, just give me an afternoon browsing in the strangely old fashioned named department. Home to fabric, beads, buttons, ribbons, sewing threads and embroidery silks, it’s exciting because it holds all the possibilities of beautiful things that have not yet been made.

Couture depends on the details. The fabric, the hand embroidery, and even the buttons used made it stand out from anything you can buy on the high street. Visiting Yves Saint Laurent’s recreated atelier in Paris is breath-taking. There are are drawers and drawers of ribbons, jewels, and sample beads to inspire his collections. It’s like being allowed to play with a treasure chest and a dressing-up box all at once.

Some designers, like Norman Hartnell, even started with the fabric before making any drawings. They visited mills to see what they had made that season before designing the dress around it. Other fabric manufacturers worked closely with the designer to create what they want. Once the material was in place and designs made, accessories were often created to exactly match the garment. Machine embroidery design could be added to complement the fabric.

Bows are a perennial favourite for designers. There’s something about the flourish of silk and the nostalgia of childhood that makes this a detail that is often returned to. Bows appear in fashion in large and small sizes and everything in between.

One of the most famous bows, is, of course, Schiaparelli’s Trompe l’Oeil bow sweater, first made in 1927. It is a fun, practical item of clothing, where the appearance of a large bow and sailor collar is knitted into the fabric of the jumper.

More recently, a great lover of bows has been John Galliano. His inspiration is 18th century and early 19th century dresses, where exaggerated bows were all the rage. He adds great silk bows to skirts, or ragged, deconstructed bows to jackets. They also appeared on hats or drawn onto t shirts.

Ribbons and Headbands and Bow Ties

The other great use of bows is in bow ties. The fashion journalist Hamish Bowles is famous for his bow ties, as is the milliner Stephen Jones. They evoke an old fashioned, gentlemanly look. A little bit dashing, a little bit eccentric. A woman in a bow tie usually wears it to complement evening wear, for a roaring 20s effect.

Kind of the opposite of that chic and streamlined 20s androgyny is a beribboned girly look. Hair bows are essential for this, whether oversized as in an 80s Fergie bow, or small little bows on the ends of plaits. A bow at the waistline will add to the effect. For head to toe bow decoration, shoe bows have been a popular choice. You can buy them separately and clip them on for extra excitement.

Designer Buttons, Made by Artists 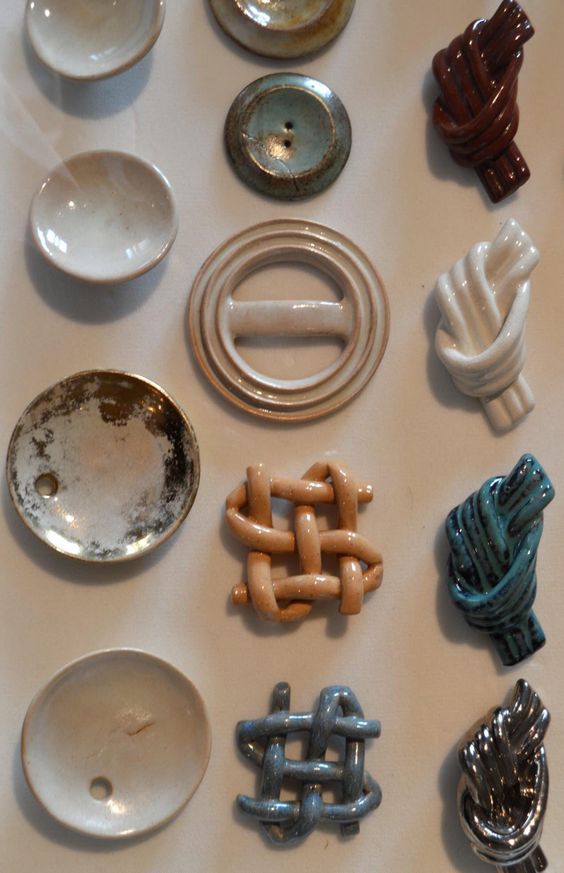 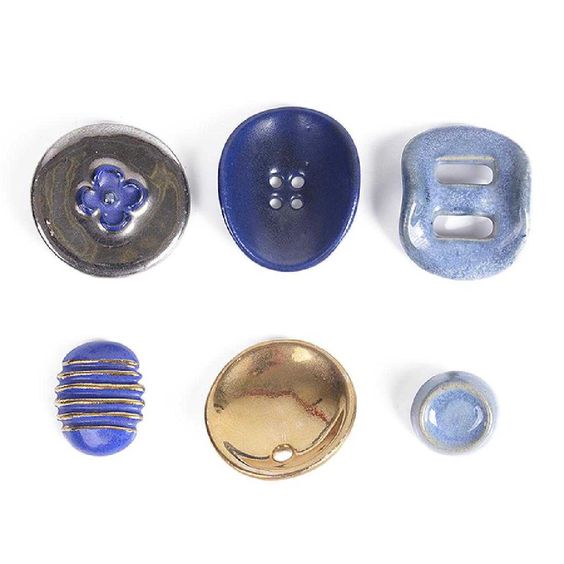 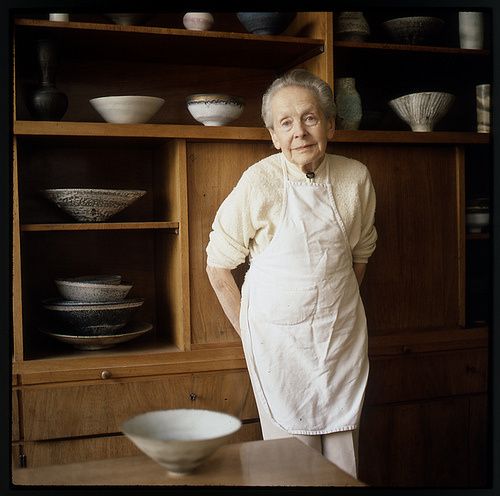 This is Lucie Rie in her studio in later years. Image via Pinterest. 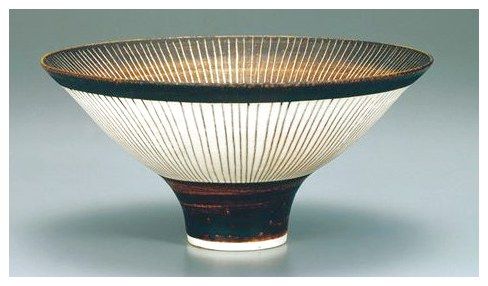 And this is one of her gorgeous bowls. Image via Pinterest.

Designer buttons were really in vogue in the 20th century, and some fetch thousands of pounds at auction today. Lucie Rie, who is now known as a famous potter of huge influence, (and even huger price) made buttons when she first came to England from Austria and times were lean. She was a Jewish refugee from Nazi Germany in WW2. She had a studio, which was more than many female artist emigres had in her position. But no clients, and was grateful when a friend with a button company offered her some work making them. At first, she actually made the little round shapes on the wheel, throwing them like tiny plates. Can you imagine how time consuming and fiddly that would have been? She also hand formed knot shapes using little worms of clay.

After a while she employed an assistant and together they worked out how to make moulds for buttons. This made the process much quicker. Designers would come to Rie and request a shape. They would also bring samples of fabric for her to match the colour. She would mix one of the beautiful glazes for which she later became famous. Often the turnaround was very quick, and they gave her less than a week to complete the order. Buttons were commissioned by designers like Norman Hartnell, Edward Molyneux, Jacqmar and and Digby Morton.

This work ensured Rie’s survival in the early years. It also gave her an opportunity to experiment with colour and form in her tiny commissions. Tiny in size, that is – the order could be for just two per style and colour to hundreds all the same. She was a woman of few words so she never said what she felt about it, but the buttons moulds stayed on a shelf in her studio for the rest of her life. The V&A now holds a collection of her buttons if you’re curious. 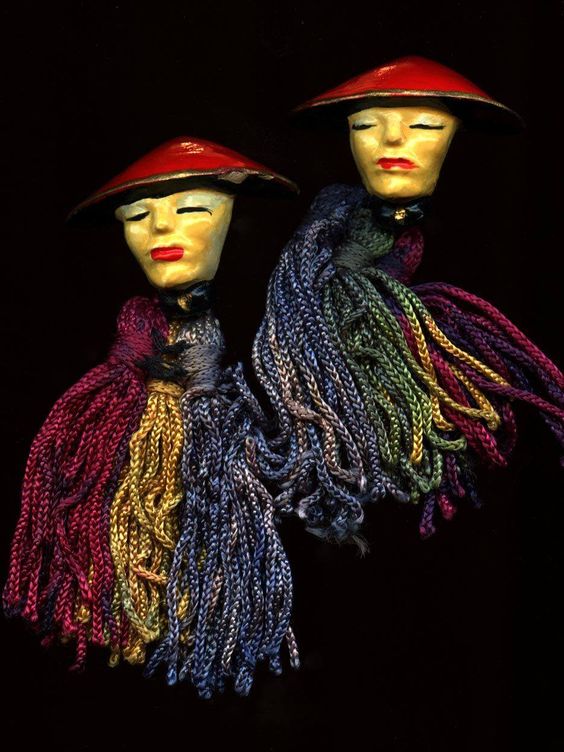 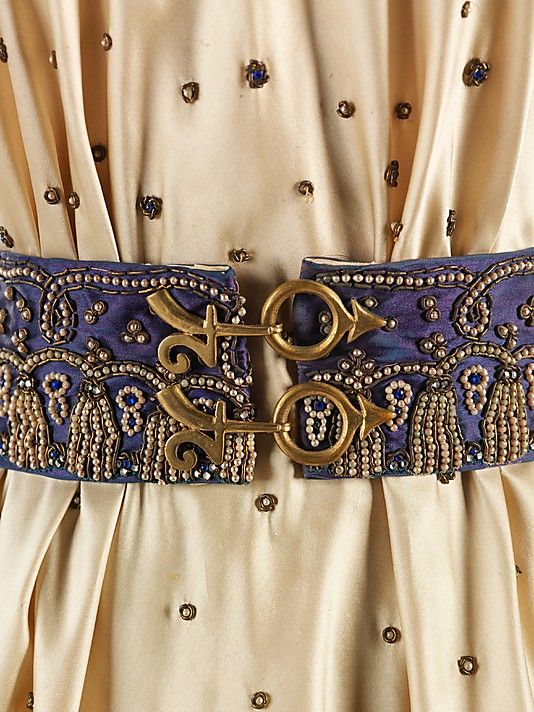 Elsa Schiaparelli was also crazy about buttons and she commissioned artists to design and/or make them too. Her buttons were often whimsical, in the shape of pianos, mermaids or acrobats. They were made in cast metal, hand painted with enamel – not always exquisitely, it has to be said. Another striking feature of her work was the stunning and very lavish hand embroidery that often encrusted the lapels of velvet jackets or covered the whole back.

Buttons, Bows and Embroidery – The House of Lesage 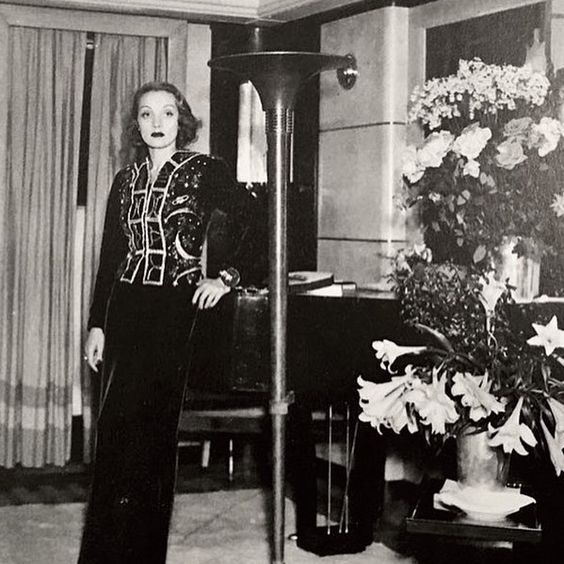 It was made by a firm called Lesage. The House of Lesage was founded in 1924 in Paris, taking over another workshop, Michonet which had been in business since 1858. Minochet had concentrated on embroidery for the theatre and for Napoleon’s army (think of those gold epaulettes and the gold flourishes all over the red uniforms). They also created couture embroidery for Worth and Vionnet, and it was this side of the business that Marie-Louise Lesage and her husband, Albert, decided to concentrate on.

After a few small orders with them, Schiaparelli only placed embroidery work through the firm. She was exceptionally demanding, but loyal. Lesage created the posies at the top of the bottle for her first perfume, Shocking. The created embroidered bow and girls bow. They also did all the embroideries for the clothes she made for Marlene Dietrich and Wallis Simpson. Dietrich and Schiaparelli were both photographed in a splendid black jacket with palm trees embroidered in shimmering gold sequins. It was designed by Schiap and executed by Lesage.

Thousands of Hours of Work

An item of clothing embroidered by Lesage deserves its extraordinarily high price. They take hundreds of hours of work – about a thousand hours for a ballgown. The workshop is capable of taking on complicated commissions, such as recreating a Klimt painting, or sewing on the finest chiffon without making a mistake. Any unpicking would damage the fabric irrecoverably and when the embroidery is made directly on an already created gown, that just can’t happen. I’m always overawed when I see the detailed samples made to show clients. These beautiful objects are just made as suggestions, to try out colour ways or methods of embroidery and use of buttons, bows and embroidery and won’t even be used in the final creation. It is an area of great dedication.

The House of Lesage is still in great health today and has been used by Chanel, Dior, Christian Lacroix and all the big names. It even capitalised on its reputation to open a needlework school for non-professionals, so, if you want to create something amazing yourself, you can give it a try.