Baron Adolf de Meyer was American Vogue’s first official fashion photographer, responsible for the dreamy portraits of so many of our early fashion icons from the very beginning of the 20th century. The actresses Lillian Gish and Gloria Swanson, dancers Josephine Baker and Irene Castle, self-styled “Living Work of Art” Luisa Casati, socialite Rita de Acosta Lydig, and so many other creative and talented women posed before him.

Because of Adolf de Meyer’s position for Vogue and later Harper’s Bazaar, a great body of his work was fashion photography, yet he also explored other subjects, including dance, still life, records of his travels abroad, and many, many portraits of his wife and muse, Olga. De Meyer also experimented with photographic processes, developing certain colour techniques. 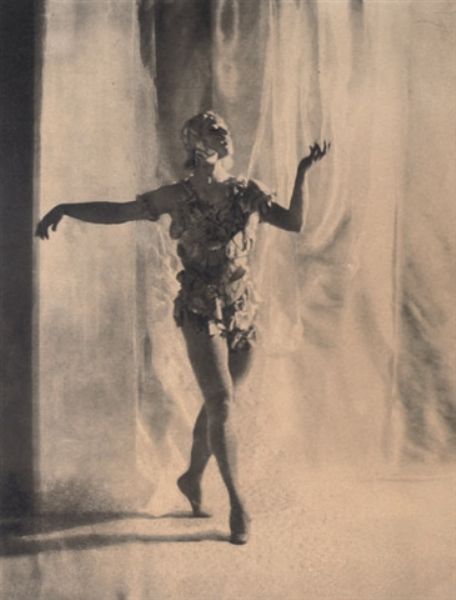 Baron Adolf de Meyer and Olga were one of Europe’s most watched and talked about couples of the early 20thcentury. Beautiful, stylish, talented and witty and with the whiff of scandal and eccentricity about them both they moved in an aristocratic and artistic circle.

The photographer was, shall we say, fluid about his name and personal history, but these are the generally agreed facts. Born in 1868 in Paris, Adolphus de Meyer had a German Jewish father (Adolphus Louis Meyer)and Scottish mother (neé Adele Watson). He spent his childhood in both France and Germany and was educated in Dresden but described himself as an American.

This sudden appearance of a Baronetcy may have a) been inherited from his grandfather or b) had been granted in 1897 by Frederick Augustus III of Saxonyor very probably c) an invention from thin air. Who knows, but de Meyer was photographing many socialites by then, who often owned grand titles, and might have thought he would gather respect by having his own title.

He married his wife, Donna Olga Caracciolo, in 1899. Olga was an Italian noblewoman, and married to an Italian prince when they met. Olga and the prince’s marriage was described as “brief and dramatic”, although they had been together for eight years by the time she divorced him to marry de Meyer, which happened one month after the decree came through.

The rush was not because of any undignified reason of pregnancy, however. Both Olga and Adolf de Meyer were gay. At the same time, this wasn’t a “marriage of convenience”, as it has been described. Both partners apparently adored one another, just not in a sexual way. They were rarely apart, and the number and tenderness of Adolf de Meyer’s photographs of Olga attested to his devotion.

Before they were married Adolf de Meyer, in his unpublished autobiography, explained to Olga how this would work. Theirs was “the real meaning of love shorn of any kind of sensuality”. He further observed, “Marriage based too much on love and unrestrained passion has rarely a chance to be lasting, whilst perfect understanding and companionship, on the contrary, generally make the most durable union.”

Perhaps Olga already knew about that. She was rumoured to be the child of the Prince of Wales, the  future Edward VII, because of the great attention he paid her mother and herself, and his many visits and gifts he gave them both including financial security and a seat for Olga (her mother had died) at the front row of his coronation in his private box. However, it seems to be really unlikely that she was his natural child, and the King probably knew that. It could be that his love for Olga was entirely altruistic.

Arrangement in Pink Red and Purple by James Abbott McNeill Whistler. Olga is the model. Image via Wikimedia

Both Olga and Adolf de Meyer were famed for their sense of style. The French painter Jacques-Emile Blanche, reminiscing about Olga in his memoirs, wrote: she “has such a wealth of dresses, fans, and jewelry as befitted one who put in an appearance at all important social functions. When Olga enters the Orchestra stalls, the opera glasses of everyone were focused on her, the most elegant woman in the audience, the most thoroughbred of cosmopolitan society: ‘Here is the Baroness de Meyer,’ they whisper spellbound.”

Their friends included many other interesting poets and artists as well as aristocrats. James McNeill Whistler painted and drew Olga, and was probably a mutual friend. There are also portraits of her by  Jacques-Émile Blanche, James Jebusa Shannon, Giovanni Boldini, Walter Sickert, John Singer Sargent, Charles Conder and Paul César Helleu. Olga de Meyer also inspired characters in novels by Elinor Glyn and Ada Leverson. All these people were likely to be both halves of the couple’s mutual friends. During her marriage to Adolf de Meyer, Olga had affairs with the writer Violet Trefusis and Princess (Edmond) de Polignac, a Singer sewing machine heiress and arts patron amongst others, with de Adolf de Meyer’s full knowledge and permission.

Olga was a bad novelist (her one book was very poorly reviewed), an excellent fencer (the female amateur fencing champion of Europe) and a very good, bitchy, gossip columnist (she wrote for a French newspaper for a time). One of her short stories, Clothes and Treachery, was made into a silent movie, The Devil’s Pass Keyin 1919 by director Erich von Stroheim.

Adolf de Meyer moved in the same society as his wife. He was known as an art collector of some note, one of the first owners of a Claude Monet series of painting, featuring the Houses of Parliament, as well as other Impressionist works.

They lived together in London, Paris, and New York, spent summers in Venice and Constantinople, winters in St. Moritz, and visited Greece, Spain, Morocco, Tangier, and Egypt. Their honeymoon in 1900 was in Japan, a country that Adolf de Meyer had visited previously. He was extremely inspired by the woodblock printed artwork which is traditional there, and began to develop a style of photography that echoed it. He was also known as a skilled pioneer in the use of the autochrome process of color photography and Cecil Beaton dubbed him the Debussy of photography.

Adolf de Meyer was a member of the Linked Ring photographic society by 1899 and was published in Alfred Steiglitz’s quarterly journal Camera Work between 1903 and 1907. In 1912 he photographed Ninjinsky in Paris. On the outbreak of war the de Meyers went to New York where he became the Vogue photographer from 1913-1921, and also worked for Vanity Fair. On the advice of an astrologer they both changed their names in 1916, to Mahrah and Gayne. In 1921 they moved to Paris and he worked for Harper’s Bazaar up in 1932, when his style finally fell out of fashion.

Gayne, formerly Olga, died in 1931, addicted to drugs. After she died Mahrah, formerly Adolf de Meyer, now 63, began a relationship with a 17-year-old boy, Ernest Frohlich. He made him his chauffeur and later adopted him, when Ernest took the name Baron Ernest Frohlich de Meyer.

On the eve of the Second World War in 1939 Mahrah again went to the United States, taking Ernest with him and made his final home in the Hollywood Hills. Baron de Meyer died in 1946.