Wearing The Trousers – Fashion, Freedom and the Rise of the Modern Woman by Don Chapman

Wearing The Trousers – Fashion, Freedom and the Rise of the Modern Woman by Don Chapman is a great book for anyone at all interested in clothing history and the emancipation of women.

Well written, well researched and incredibly thorough, it charts the upward trajectory of female trouser wearing until it became an everyday thing for most women – notwithstanding that trouser wearing has always been the preferred form of dress for some women anyway, a fact that Chapman doesn’t neglect to point out. 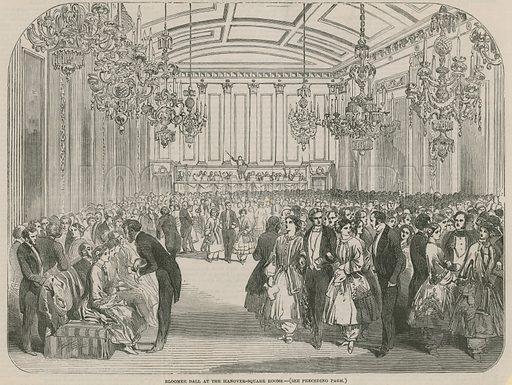 Bloomer Ball at the Hanover Square Rooms, 1851; from The Illustrated London News. Image via Look and Learn.

Hand-colored lithograph of the music cover for the “Bloomer Waltz, 1851. Image via Victoriana.com

Chapman was inspired to write his book when he was working for a local newspaper, the Oxford Mail. One of his readers had been going through his grandfather s papers , and the papers relating to the Western Rational Dress Club. It turned out to be a rich and fascinating seam, and Chapman promised to return to it when he retired. This is the resulting book, but the author has decided not to include just these papers (which he eventually tracked down a copy of) but the whole subject surrounding them.

Wearing the Trousers – the Bloomer Costume

He begins with the trend for “Bloomer Costume” in America in the 1850s. As is the case in most innovations, the person who becomes famous for inventing something and which that thing is often named after turns out not to have been the original creator at all. For example, Charles Darwin didn’t invent the theories behind Darwinism, Alison Bechdel claims no credit for the Bechdel Test, and Amelia Bloomer begged people not to hold her responsible for the craze in bloomers. It’s not that she was against people wearing the Bloomer Costume, it’s just that the idea was already around and being advocated as very convenient.

Mrs Bloomer had already met the early adopters of what was then described as “Turkish pantaloons with a skirt” when she tried it on herself for the first time. The reason why the outfit became named after her is that she was the editor of a magazine, The Lily, and when she put on trousers she told all her readers. Suddenly, lots of papers around the globe picked up the story (they tended to copy each other) and her name was made. After that Mrs Bloomer went on many lecture tours espousing the outfit, which she found “Comfortable, light, easy and convenient”. Many ladies seeing her or reading her words, or reports of them, were quite taken by the idea, and resolved to try Wearing The Trousers themselves. It was a particularly big craze in America, where bloomer balls were held, women dressed in bloomer costume en masse for Independence Day, and women were even married in trousers.

Interestingly the overall form of the “Bloomer Costume” had very little variance, although the details were different according to the wearer. The top half was in line with the fashion of the day, with a fitted bodice over a corset, and a fitted jacket on top. Then there was a full skirt to just below the knee. Below that were worn the bloomers, which were very voluminous and came down to the ankles, where they were usually caught in in a shape like Harem pants. The bloomers weren’t worn without a skirt on top, or without a corset to create the fashionable hourglass shape, so the outfit could in no way be mistaken for a man’s.

The reaction to this was generally surprisingly positive. The effect was described as “doll-like”, “graceful” and pretty, and it was generally held that the inevitable satirical plays and cartoons intending to mock the new fashion failed because the star of the show, wearing the outfit to be held up for ridicule actually looked very good in it. On reviewing “Bloomerism or The Follies of the Day” the Morning Chronicle of 1851 noted that it “takes a larger scope than is usual with pieces de circonstane. Not only the new American lady trousers but the water cure, vegetarianism, phonography and peace congresses are … ridiculed.” The reviewer went on to say that Miss Woolgar drew several rounds of applause before uttering a word, “homage to the piquant costume and the grace with which it was worn”. The finale “The Bloomer Polka”, was enthusiastically “redemanded”.

The trend swiftly came to England, where it became of such fascination that pub owners often put their barmaids in it as an extra draw, and would pay them quite a lot if they would wear it. Also popular were public lectures about the costume. It then became the norm to refer to the wearer of the outfit and not the outfit itself as “A Bloomer”. Soon “Bloomerism” was shorthand for “Women’s Rights” as it had ben so often pointed out that women wearing these clothes had so much more physical freedom, and could therefore do many of the things that men did. However, though this early suffrage movement had quite a lot of critical support, it gradually died out as the bloomer costume itself fell out of fashion.

The next trouser trend to arise was the cycling outfits of the 1870s which grew along with the fashion for bicycles. Some outfits featured trousers outright, others convertible skirts or divided skirts. There was a famous court case in 1898 where Lady Harberton went to the Hautboy Hotel in “rational cycling dress” and asked for lunch. The landlady turned her away from the coffee room, which was where ladies lunched, and sarcastically suggested she go instead to the men’s bar since she was wearing trousers. This was far less salubrious, smoky and where the men went to drink. The matter was extremely divisive, with many supporters of the Hautboy cheering her on, saying that women who wore trousers were unchristian. Others, of course, indignantly supported Lady Harberton. However she lost the case because she had, in fact, been offered victuals.

These and many other interesting stories are featured in the book, which is very well worth the read.

Wearing The Trousers – Fashion, Freedom and the Rise of the Modern Woman by Don Chapman is available to order now.