Feminism gathers pace. Back in the West, from perhaps the 1930s onwards, trousers gradually became accepted as a fashion item, although skirts were still the norm. During WW2 in the 1940s, the wearing of trousers became mandatory for some women for war work, and the work itself and the freedoms the war afforded them created the unintended effect of greater equality for women.

It’s something that the government strove to impede or even reverse when the war ended, and men coming back from the trenches demanded their old jobs back. They did this through propaganda, as well some more practical actions such as closing crèches which had been provided in workplaces for childcare, and denying workers the flexibility in their working hours which they had provided in the first place to make it easier for women to work these jobs. 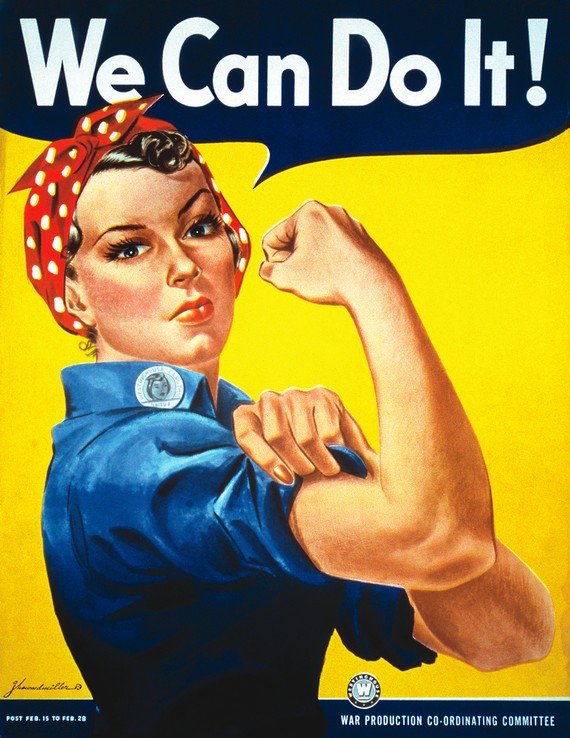 Some women had enjoyed these jobs, which were usually in factories, making, for example, bullets and munitions, on farms helping with crops and animals, or in offices. They regretted having to give them up. Others didn’t, and were glad to get back to their households and roles as wives and mothers. 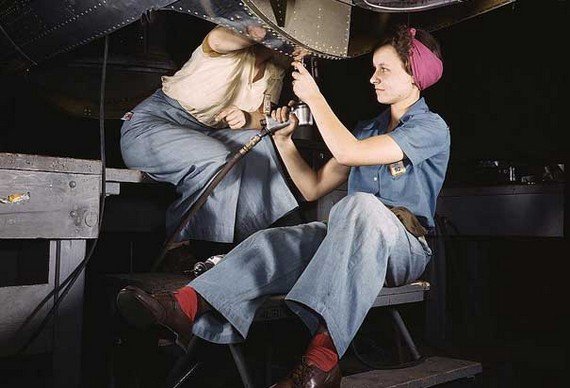 Women working on a plane, lookimg capable and stylish

Regarding the outfits they wore, factory girls were usually issued a grey all in one jumpsuit. Some women altered them, adding waist darts or pulling them in with a belt, and though hair often hair needed to be pulled back o covered, they achieved this with a jaunty bandanna. They could not wear jewellery or accessories, much as today in factory work, but often accessorised with some perky red lipstick instead. 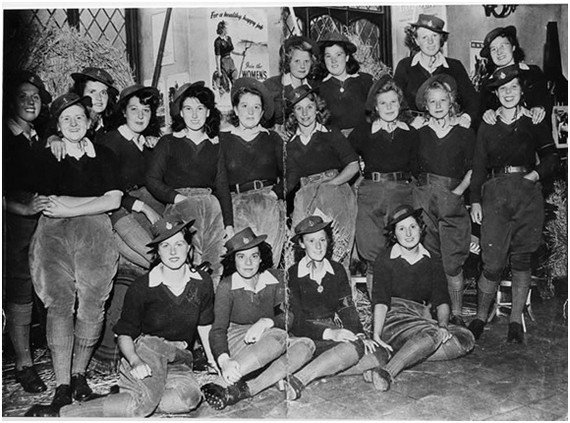 “Land Girls”, who worked on farms, often wore trousers for the sake of practicality. Some city women wore them too, for practicality in getting about and also because there were fabric shortages. Since they often couldn’t buy a new skirt or dress, women simply pulled the clothes of their absent men from the wardrobe and wore them themselves.

Later on, and certain Western women of the 1970s embodied their ideals of feminism by again wearing male costume, or what might more properly be considered un-female costume – eschewing makeup, bras, high heels, and dresses in favour of less decorative flannel shirts, jeans and boiler suits. They didn’t want to accentuate their femininity by wearing feminine clothes, as they felt it undermined their quest for equality. They didn’t simply want to become an object which visually appealed to men.

But in the 1980s, ideas swung a different way. Women began to embrace the concept of grinding men under their high heels, rather than their practical sandals. They strove to achieve equality in the workplace with “power dressing”, where they wore trouser suits with broad, padded shoulders which created a triangular shape to the body, the lines of which strongly recalled the male physique. They teamed this with bright lipstick and high heels. These “Glamazons” wanted to give an impression of being powerful women, just as capable as men in achieving their goals in the workplace.

A more modern feminist protester in a boilersuit

This 1980s Amazon literally has men at her feet