Of course, when it comes to women dressing as men what often comes to mind is Androgyny and entertainment with the music hall stars of the end of the 19th Century and beginning of the 20th.The most famous real life example of cross dressing for entertainment purposes may be Vesta Tilley, who was the highest paid woman in Britain in her day. Born Matilda Alice Powles (1864-1952) she had a number of characters in her repertoire of male impersonations. 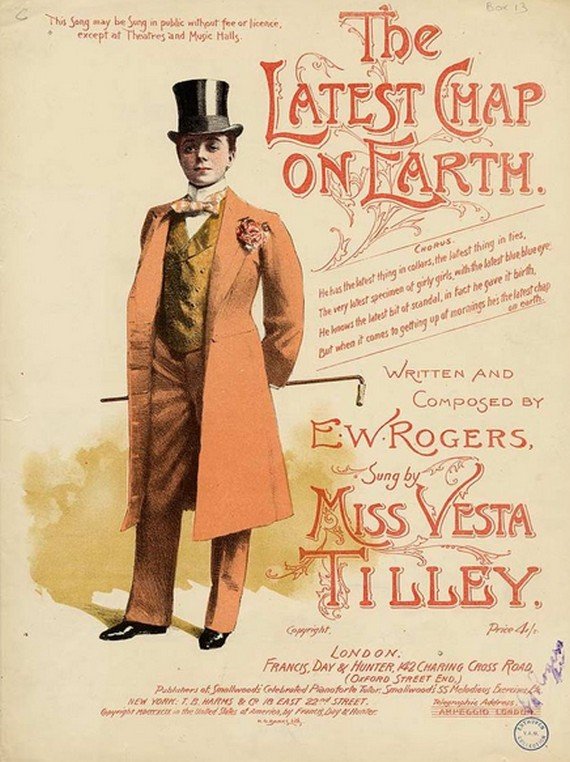 Poster for a Vesta Tilley performance. Note the use of the honorific

The whole point of her performance was that the audience knew very well that she was a female all along. She also made a special effort to wear feminine clothing off stage, preferring fur and jewellery, and was married to a man who later became an MP. 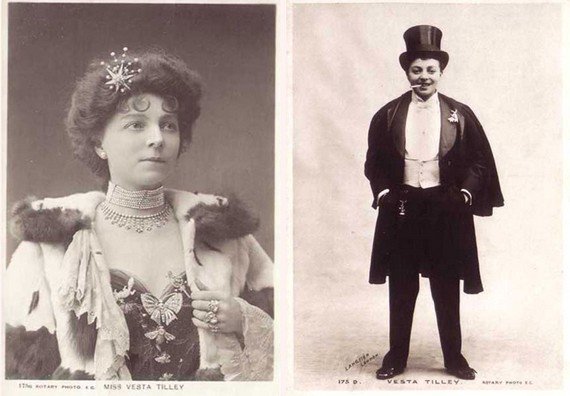 Vesta Tilley in every day clothes and in performance mode (2)

The very fact of her massive popularity, along with other women of the time who had similar acts, perhaps shows something of the attitude towards women in trousers at that time – risqué, entertaining, certainly frowned upon as evinced by Tilley’s insistence on women’s clothes in her every day life – but still fascinating.

Film star Marlene Dietrich (1901-1992) picks up on this louche attitude perhaps half a century later. Here’s a picture of her in 1932, quite clearly a woman, quite clearly in men’s clothing. She is not, however, imitating a man.

Christopher Isherwood’s character Sally Bowles, written in 1937, is depicted wearing elements of both men and women’s clothes for Liza Minelli’s performance in the 1972 film “Cabaret” to great effect.

Androgyny and entertainment – Tipping the Velvet

And to bring it full circle, Sarah Waters wrote a best-selling book around the subject of Victorian music hall and its cross dressing stars. “Tipping the Velvet” was also made into a mini-series in 2002 by the BBC.

There are also a great deal of female stars who have adopted the sexy tuxedo and lipstick look for their performances. La Roux and Janelle Monae both pull it off excellently.

It seems there’s still something about the idea of women in men’s clothing that can still impress an audience, well over a hundred years since Vesta Tilley got audiences all hot and bothered.

Charlotte Rampling in The Night Porter

La Roux in a tux