I’ve got a small historic bone to pick. Vintage jeans have come to mean jeans made of sturdy, wear-worn denim; however ‘denim’ and ‘jean’ are two types of workwear materials with separate origins.

The word “jeans” comes from génes, the French word for Genoa in Italy, where sailors were known to wear sturdy trousers made of fustian, a twill of cotton, linen or wool.

By the sixteenth century, the fabric for work clothes was being referred to as “Jene Fustyan”, and two centuries later it was made entirely of cotton. Indigo dyed trousers made from jean were often referred to as “jean pants,” the origin of the contemporary jeans.

The cotton twill we now recognise as denim was given its name in the 18th century England. Allegedly, the twill was given a French name (serge de nîmes) to gain prestige: yet the original French serge de nîmes is predominantly made of wool, whereas denim is a sturdy cotton twill, yarn-dyed and woven with an indigo-blue face and a gray or unbleached fill. This method allows denim to develop its distinctive fade marks and creases we have come to associate with the vintage jeans.

The first jeans were created in 1873 by Jacob Davis, a tailor from Nevada who, together with San Francisco merchant Levi Strauss, patented the work trousers for the Californian miners and labourers that featured distinctive copper rivets that reinforced joints and pockets. The archetypal blue jean, Levi’s 501, originated from a pair designed in 1890.

The photos above from a vintage jeans collector show how the original 1873 jeans would have looked like.

Featured are small unriveted cinch straps, unbranded rivets (before Levi’s introduced their branding on rivets), large watch pocket on the waistband, no arcs on the back pocket, a small centre patch, duck or denim pocket bags, hand-sewn button holes, salvage waistband and a 1870s crotch stitch with only three fly buttons.

Here you can see the original of the 1873 vintage jeans again, showing the difference in denim & details.

Vintage jeans are now the stuff of legends: worn by cowboys, rodeo riders, miners and workmen, they were instantly glamourised by the Hollywood stars John Wayne and Gary Cooper, but also Carole Lombard and Ginger Rogers when camping or fishing.

Vintage jeans became the casual dress of all classes, worn at times of leisure, but their international boom was propelled by the WW2.

As a result of wartime textile restrictions, the jeans got slimmer and more reduced (into their popular drainpipe shape), and were the uniform of the war workers as well as soldiers off duty. American GIs wore them off duty when they went to town, so soon in continental Europe blue jeans became a symbol of freedom and leisure.

And as women’s dresses grew in length and frills after the war, the narrow drainpipe jean shape was upheld by Hollywood: Marlon Brando in The Wild One (1953) and James Dean in Rebel Without a Cause (1955) looked too good in slimmer cut vintage jeans to make them baggy again. 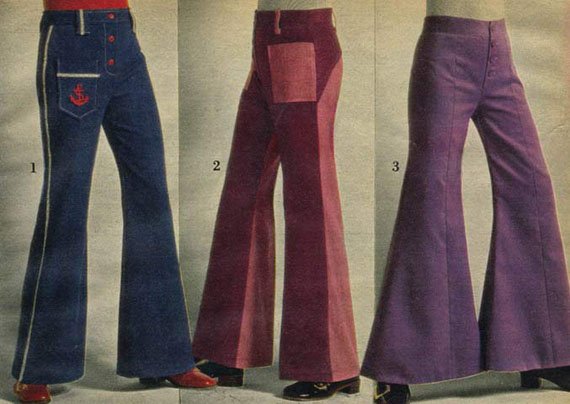 The 1970s, much as we like to mock them, were the golden age of vintage jeans.Jeans, especially faded flared bell-bottoms, were worn by everybody: by the rock and film stars, heiresses, teenagers and political activists.

A lot of experimentation with new, stretchy materials and dying methods took place, and as a result fashion jeans begin to emerge. In contrast to the hipster flares, the fashion jeans were slim, skin tight and dark – like Fiorucci’s Buffalo 70 jeans, or those from Gloria Vanderbilt’s 1979 collection.

Any look into the life of Studio 54 or the photos of Cher from the 70s will reveal the figure-hugging, high-waisted fashion jeans with a large logo on the back pocket: the vintage jeans made a complete break from the practical work- or leisurewear and became an expensive designer item.

Designer Jeans of the 1980s

The 1980s were a fully-fledged decade of designer vintage jeans: Jordache, Sassoon, Sergio Valente, Calvin Klein. The trend continued with fashion houses such as Versace, Dolce & Gabanna and Donna Karan, but also the mainstream brands like GAP, Tommy Hilfiger. Jeans became the wardrobe basics and were worn by all.

Marlon Brando in The Wild One.