Ginette Spanier was the lively and very effective directrice of Balmain from 1947, two years after its inception in 1945, until 1976. She was the force behind the business, so whilst the designer designed, she kept the workrooms and the front of house running smoothly and kept client relations going. She was a close friend of the designer and many of his celebrity clients, including Marlene Dietrich.

Spanier had a fascinating life, including a pampered upbringing in London followed by a terrifyingly peripatetic existence during WW2, where as a Jew in France, she was always just one step ahead of the Germans. When the war ended, she was invited to work on the Nuremberg Trial to see those who had made her life a misery sentenced.

Jenny Yvonne Spanier, known as Ginette Spanier or her married name, Ginette Seidmann, was born in Paris in 1904. Her mother, Alice, was a French socialite, and Max, her father, was English of French descent. He was a pearl merchant who could recognise a pearl on sight and once posed as a criminal “fence” to recover his friends’ stolen pearls and convict the thieves responsible. She had two sisters, Didine, a year or so older, and Janine, much younger, who sadly died in her 20s. When the sisters were small, they had a nanny. Spanier attended Frognal School in London. She was raised in Hampstead London. The family home was in Golders Green.

As a teenager, Spanier visited Paris and New York and had a wardrobe of couture. But her father’s business was affected by the Wall Street Crash of 1929, and she suddenly had to make a living. She had worked, briefly, as a secretary for the War Office and a pianist, but that was mostly for fun. Now she decided, to her parent’s horror, that she wanted to work in a shop. She chose Fortnum and Mason’s gift department. Spanier loved the atmosphere, the beautiful furniture and decor, the scented air, and the beautiful people who came to shop there. She was very successful as a saleswoman. One of her customers was the Prince of Wales. Another was Wallis Simpson, although, at that point, the two had never met.

But the department was in a basement, and for all its luxury, it was not a healthy atmosphere. She became Buyer of Bags for Fortnum’s and switched to a job as a sales manager for a bag firm, Bemaron’s. But she hated both jobs because she disliked buying in bulk. She preferred to give every object she dealt with individual attention.

While she was in Paris for work, in 1939, she met and married a French doctor, Paul-Emile Seidmann. She quit her job and England and went to live with him in Paris. This was unfortunate because that was the year the war began, and they were both Jewish.

Seidmann was attached to a military hospital. Ginette followed him from town to town, staying in hotels and becoming very lonely. She tried to persuade him to leave France together and go back to her family in England. But he wouldn’t. By June 1940, Paris was occupied by the Germans.

Had to Sell Sanitary Towels

Initially, they stayed on in occupied Paris. But when Paul-Emile’s mother became ill in Nice, they bought a pass on the black market to go to her. Spanier hated Nice, which is where the rich people had escaped to. They gambled, sunbathed and partied as if there wasn’t a war. Paul was stripped of his right to practice medicine, and Ginette took a job selling sanitary towels to chemists shops.

But soon, they realised that the German were arresting Jews and fled to the Savoy mountains. Ginette kept herself busy by cycling around the neighbouring farms, bargaining for bits of food. Paul-Emille illegally, reluctantly, practised medicine amongst the villagers, saving lives. They kept on moving on, once staying with friends in a dower house the very day the Germans came to requisition the main mansion. They had to stay all weekend and pretend they had just come for a party. The Germans visitors rounded up and shot local people they suspected of being Jewish or members of the Resistance (wearing a jacket with a zip, practical hobnailed boots, or having a beard were all markers, for the Germans, of being Resistance members). The Seidmanns left on Monday morning, waving and blowing kisses, shaking inside.

Awarded the Medal of Freedom 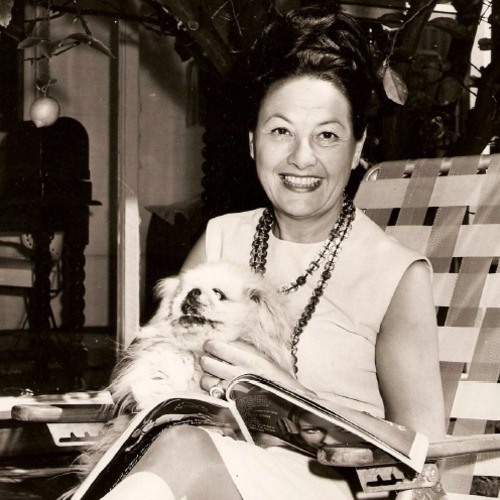 At the end of the war, the couple cycled to Paris. Spanier had a great wish to see English people again. She presented herself to the British Red Cross, who didn’t want her services. Instead, she became a translator for the American Army, as she spoke both English and French fluently. She became the head of the translation division and organised a group of translators for the Nuremberg Trial. She was also invited to witness it herself. For her services, she was decorated for her
wartime work with the Medal of Freedom. Seidmann was made a Chevalier de la Légion d’honneur for his work with concentration camp survivors.

A Job in Couture

In Paris, 1947, a young friend came to stay. The teenager, who was named Angela, had come to buy couture, and she wanted something from a new designer, Pierre Balmain. They saw the Collection together, and Angela picked a black, beaded, velvet dress. Spanier was loudly outraged and overruled both Angela and the Vendeuse trying to sell them the dress. “There is no question of the young lady going back to her family with the dress of a middle-aged woman. Never mind how beautiful the dress is. What she needs is the little blue flannel number which was shown third in the Collection.” Pierre Balmain’s mother approached. She was the head of the House and offered Spanier a job on the spot. “Madame, it is a woman like you we need in this firm.”

Ginette Spanier had always been terribly star struck. Before the war, she was delighted to meet (and remain friends with) Noel Coward. Now, she was delighted to meet and make friends with Brigitte Bardot, Claudette Colbert and Marlene Dietrich. She taught Bardot to curtsey for an audience with the Queen and had a dress made for her with a detachable modesty panel to cover her famous bosoms when meeting royalty and to rip off later for the press. Colbert invited her for Christmas and gave her a pair of pearl-studded slippers.

Dietrich was described as the House’s best customer… and their worst. She would stand for hours at a fitting, complaining that a seam’s angle in a lining wasn’t right. Once, when she had exhausted everyone, and they were all late for lunch, Spanier sent the fitters off for a break and dressed Marlene herself. She invited the film star to her house for lunch. It was Paul-Emille’s birthday, and there was caviar. Dietrich ate it all. Paul-Emille shouted at her. They all became great friends.