60s fashion trends watchers will likely agree that the daring 60s was a revolutionary time, much like the clothing revolt of the fearless flappers of the 1920s

In some ways, 60s fashion trends are reminiscent of what transpired decades ago in the 1920s, when fashionable women were inspired by flamboyant contempt for “conventional” styles and designs. This passive resistance sowed the seeds of women fashion trends that defined the entire decade or more.

The 1960s are a time where pop icons like the Beatles were screaming headlines all over the globe. But in their shadow, women’s 60s fashion trends were quietly taking shape – albeit defined with the help of some very divergent and fashionable ladies of the decade.

The 60s fashion revolution probably kicked off in the early part of the 60s, when a new look to dresses – called the “Boufant” – took off. Until then, a woman had little choice but to wear a dress that was tightly fit to her body. Fashion designers of the prior decades were obsessed with clothing that created the perfect hour-glass silhouette of a woman’s body.

One of the most iconic of 60s fashion trends, the Boufant was a revolt from the hour-glass look. It epitomized a trend for more “opening up” of a woman’s dress. Featuring a look that had dresses designed to be tighter on top, the lower part of the Boufant skirt puffed out gracefully.

Another defining moment in 1960s fashions was the “Beatnik”, which took off around 1962. Popularly known as the Beat Look, it featured prominent clothing and accessories that were primarily black in colour.  From tight black slacks, to black berets and even black glasses – anything black was fashionable in womens wardrobes. Creative designers even built up brands around dark makeup!

And no mention of the 1960s could ever be complete without noting the influence of leisure wear in defining 60s fashion trends for women. 1963 was the year that the bikini first came out in public, when it took its place in 60s fashion annals after becoming popular in the famous movie Beach Party.

One of the turning points in 60s fashion trends occurred also in 1963, when fashion icon Mary Quant launched her personal 60s fashion label. Some of her moving styles introduced included mini skirts that were much shorter in length than the traditional skirt women wore up to that point.

Mary Quant also introduced another fashion trend – the wet look vinyl – which young ladies embraced wholeheartedly as a sign of revolt from traditional cotton and blended fabric. Women also started to wear coloured tights, thanks to the designs and styles introduced by Mary Quant.

And while they were more of music revolutionaries than clothing influencers, 1963 also saw the Beatles hit centre stage.  That year saw designers Pierre Cardin and Douglas Millings put together the now iconic single breasted, collar-less jacket, matched with slim-fit pants worn by the Beatles. And it also put 1960s fashions for women into high gear!

The fashionable younger generation of women, that idolised the Beatles, flocked to their concerts and events. And yes – they had to wear anything that was in vogue at the time, making Beatle events as much a fashion statement for women, as it was a musical event for others.

60s fashion trends would also have an impact that could only be described as “out of this world!”

It was in 1964 that clothing started to feature design elements that were truly “far out”. Designers experimented with newer materials, such as metallic discs that were strung together. 1960s fashions also saw use of plastic and wire to create amazingly unique skirts and dresses.  And neon and metallic colours became more frequently used during the 60s. These 1960s designs were called the “Space age clothing”!

As 60s fashion trends evolved, they had other influences too. Towards the end of the decade, it became fashionable for women to wear garments that were inspired by other cultures. That was when 60s fashion took on the “Ethnic look” – where a skirt or dress or slacks from other countries or continents were paired with local fashion pieces.

It was during the latter part of the 60s fashion revolution, that colour pallets started becoming more diverse. Until then, single-coloured dresses and tops were considered appropriate. But 1964 saw the introduction of acid colours in clothing designed for women, which were bolder and brighter than traditional dyes.

The 1960s fashion calendar also saw the “Hippie look” become popular. Starting towards the end of the decade, along with the length of men’s hair, fashion designers started creating floor-length dresses.

Up until then, mini skirts were a 60s fashion staple in any woman’s wardrobe. But the “Hippie look” changed all of that. With the introduction of clothing that was lengthier than their predecessors, the Maxie skirt was born! 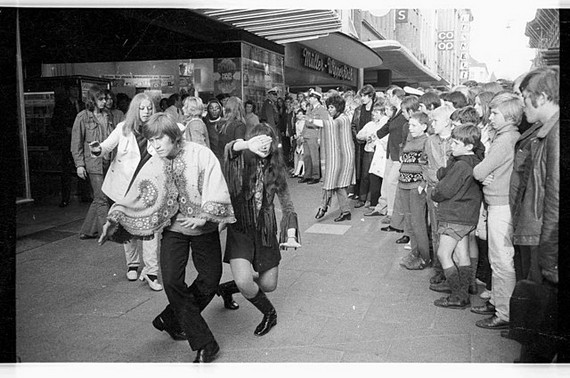 Of course, clothing was not the only thing undergoing a revolutionary change in the 60s. Hair styles, both men’s and womens, started evolving too. Women began teasing their hair and started to wear it in piles on their heads. The Beehive look of the 1960s was indeed a great hit!

The Hippie look also featured hair styles that were unique to that era. Both men and women embraced 1960s fashions that saw them grow their hair to shoulder-length, and sometimes beyond! Fashion accessory designers introduced hair bands, clips and ties ensure the hairdos of the decade looked fashionable.

It was during the late 60s that yet another one of the iconic 60s fashion trends took root – the Afro. Hair designers and stylists started promoting this bushy style of hairdo, for both men and women, which quickly became hip amongst youngsters and the disco crowd.

When it comes to defining 60s fashion trends, there are many women who really share the credit as being trailblazers for some iconic 1960s fashions. Powerful women like Jackie Kennedy defined styles that women around the world emulated.

Her well tailored collarless dresses, blouses, buttoned-down jackets and suits, appropriately accessorised with matching pearls, became a classic ladies fashion statement of the 1960s. And while many women in the 60s still followed fashion trends that included high-heels, Jackie K always looked fashionable in low heeled shoes. And even later in life, as Jackie O’, her clothing and accessories, like her iconic 1960s pill box hats, became a standard in 60s fashion wardrobes.

At the other end of the 60s fashion trends, there were women like raunchy sex symbol movie star Bridget Bardot, that started her own 60s fashion revolt. A stark contrast to Jackie O’, Ms Bardot’s cheap and tacky dresses, and the oft adorned shorter than short mini skirt, coupled with thigh-high leather boots and laced shirts, gave a new look to what (until then) was considered “conservative” 60s fashion.

And women like the “It girl” – Twiggy, also did their part in crafting styles fashion during the 1960s, as did sex goddess of the day, Ursula Andress, when she made bikinis fashionable when she wore her famous skimpy bikini in the 1963 James Bond classic, Dr. No.

And while real-life 60s women had their impact on fashion trends of their time, there were other members of the “fair sex” – more mythical characters – who came to be fashionable in their own right.

The comic strip character called Mary Jane, from the then famous Buster Brown series, became a styles icon of her own. She was the inspiration behind making footwear fashionable again – for both boys and girls – with the iconic Mary Jane shoes.

While 60s fashion trends left an indelible mark during the decade that they were popular, many of their creations have lived on. Some of the defining styles of that era, like the Hounds tooth classics of the 1960s, are even popular amongst retailers today. A brief look around vintage stores will lead you to a cache of vintage 60s fashion wardrobe pieces that are still in demand even today.

And while pants first became fashionable among women in the 1960s, fashion outlets still carry contemporary designed trousers and slacks today, which are inspired by designs from the 60s.

Even though it may seem like a life-time ago, 60s fashion trends have blazed a trail that fashion designers to emulate even today.