Jean Patchett, born Feb 26th 1926 in Maryland, America, was the epitome of fresh, wholesome American elegance. Her chirpy catchphrase was “My name’s Jean Patchett, you don’t darn it, you patch it!” She was a fashion model for around 15 years in the late 40s, 50s and early 60s, photographed hundreds, perhaps even thousands of times for fashion magazines and adverts.

Her image was that of a sort of approachable but impressive beauty. Physically, she very much resembled the other top models of the time: tall, very slender, with a highly corseted hourglass figure. Her white gloves and pearls, red lips, arched black eyebrows and perfectly made up eyes with a 50s kitten flick of eyeliner were referenced old school froideur, but her blonde curls, snub nose and lack of intimidating cheekbones  never approached the hauteur of fellow supermodels like Dorien Leigh, even while posing in a similar unsmiling fashion.

Photographers often imbued her with a sense of mystery by avoiding shooting her full face: Clifford Coffin, John Rawlings, and Norman Parkinson all depicted her with one eye variously covered by a headscarf, veil, sunhat, or her own crooked elbow. Irving Penn invariable selected only her profile or a three quarter view.

She had a very noticeable mole next to one eye and one next to her lip which were usually emphasised with eyebrow pencil, and was often photographed so that the distinctive elements of her face were highlighted  – eyebrows, one eye with its flick of eyeliner, beauty mark, red lips – to the extent that possibly the most famous image of her today is the Vogue magazine cover of January 1950 where, working from an original photograph of Jean Patchett by Erwin Blumenfeld the art team bleached out everything else leaving no face, just disconnected features staring disdainfully at the reader. 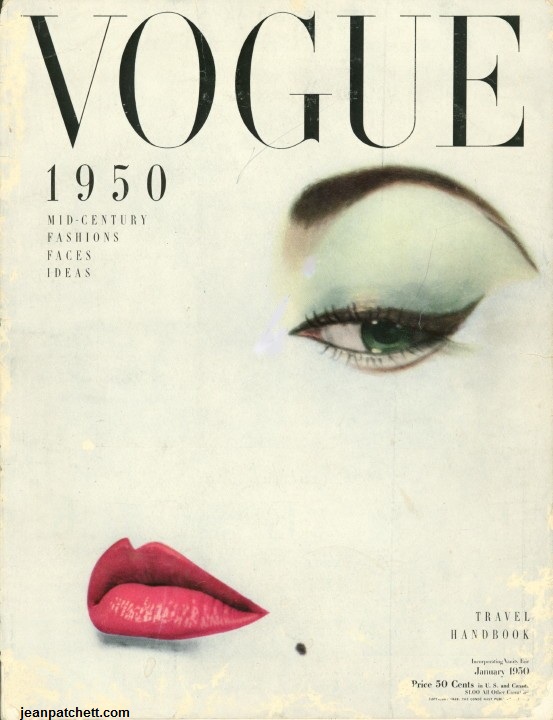 This image is not only one of the most famous images of Jean Patchett, but also one of the most famous Vogue covers ever. Cathy Horyn wrote thatit “became shorthand for an entire decade”.Just a few months later, in April 1950, Irving Penn shot Patchett for another famous cover. Once more the image was so bleached out it was more like an illustration than a photograph. 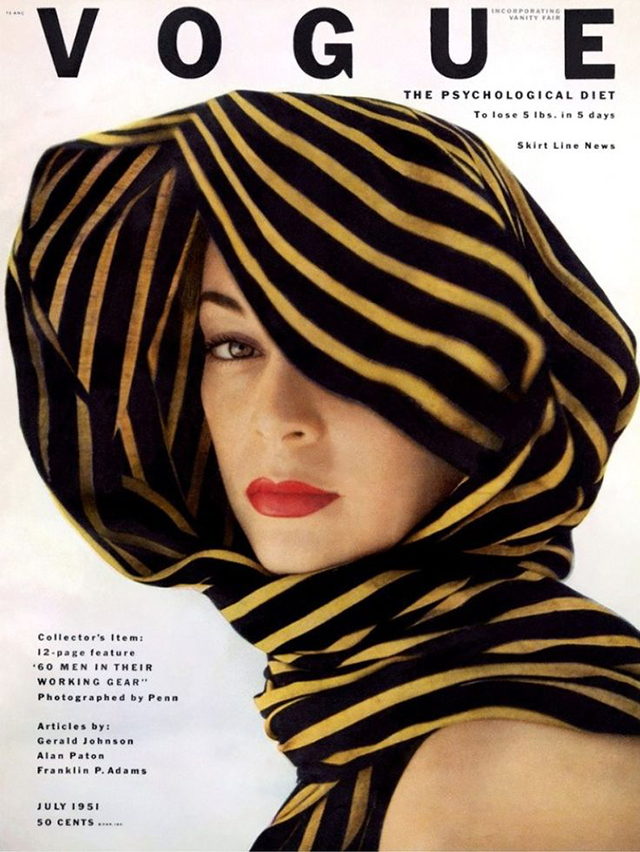 These were not her only covers. During her career Jean Patchett had 40 cover images for different magazines, and countless images inside. One shoot had her flown out to Cuba to be shot alongside the novelist and literary sensation Ernest Hemingway. At that point he was heavily overweight, and turned up for the shoot in nothing more than a tiny pair of shorts. He was also a hard drinking womaniser, and made his “appreciation” for the model clear.

It was extremely difficult to get the shot, and the final version used was actually a composite of two negatives spliced together, where a composed Patchett and a dignified Hemingway appear to be sitting on the same sofa, looking towards each other. In fact, the original photographs where they did sit together show Hemingway leering and Patchett, despite her professionalism and long experience, appalled. 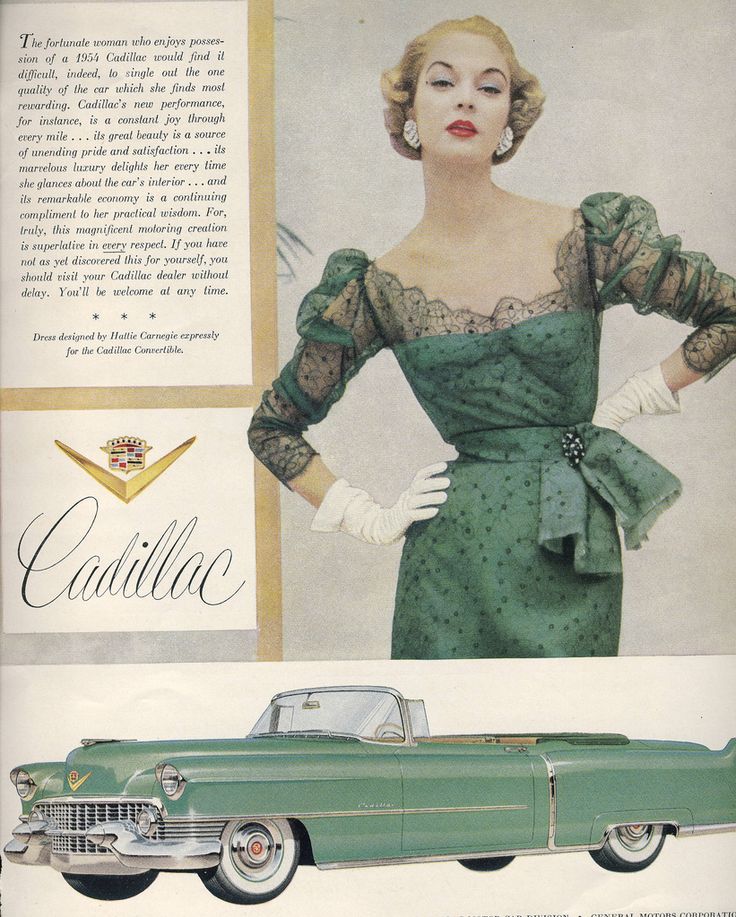 She also worked in advertising and appeared many times for Revlon and Maybelline makeup alongside luxury goods like furs, jewellery and Cadillac cars.

Jean Patchett came to New York form her Maryland home in 1948. She signed with the Ford Model Agency in May of that year, and by September was booked for Vogue. In the meantime, Eileen Ford had done a makeover on her. ”I’ll always remember what our first great model Jean Patchett went through when I told her she had to cut her hair. I don’t remember everyone, but I do remember her,” Ford said. “You just had to take a deep breath, even then.  She had on a black tent coat that her mother had made with black velvet at the shoulders and a black hat with veil and garnet earrings, bracelet and necklace. She really was a country girl.  When she took off her hat and veil I saw that she had beautiful ‘doe eyes’ and a marvellous mole on her face, which she darkened with an eyebrow pencil. Jean was unique.”

As Big as a Horse

Jean remembers that she wasn’t so complimentary on the day. “You’re as big as a horse; you’ve got to lose weight. Lose 20 pounds and come back in a month.” At that point Jean weighed 135 pounds. “Jean didn’t mind the weight part, but her hair was her glory,” Eileen continued.  “We took off just one inch, but you’d have thought we’d taken her life’s blood!”

Jean became so in demand that she was the Ford Agency’s highest paid model. She was so booked up that she raised her rate to $50 an hour, to put people off, but she only received more bookings from clients who wanted the best, most expensive model. She also worked only 3 ½ days a week, from 10am – 4.30pm, in order to cook breakfast and dinner for her husband, Louis Auer whom she married in 1951. The couple also adopted a child called Amy.

Jean Patchett often worked with Louise Dahl-Wolf and John Rawlings, but particularly liked doing photo shoots with Irving Penn. “He let me use my head”, she would recall, years later. “He always gave me a story that I would then enact. I mean, we could be at Tiffany’s buying jewels or at the theatre – something. And I played the part.” Of Patchett, Penn gushed “She was a young American goddess in Paris couture.”

The final image of Jean Patchett and Ernest Hemingway. Photo via The Red List.