John-Michael O’Sullivan became interested in the mid-century American model, Barbara Mullen, after he found out about the now-retired subject of hundreds of iconic images and decided to interview her. He discovered there was much, much more to this fascinating woman than simply her appearance and felt she had a lot to contribute to the history of fashion.

The result of this was a a great friendship, along with a book, The Replacement Girl: A Life in 24 Frames which is now in the stages of crowdfunding for publication.

I had a great chat with the charismatic author about the role of models in the early days and how Barbara balanced her work and life. 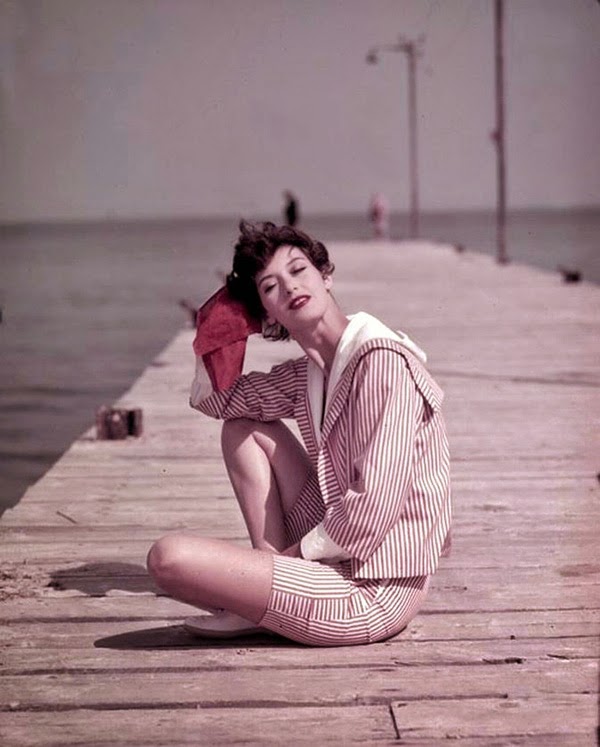 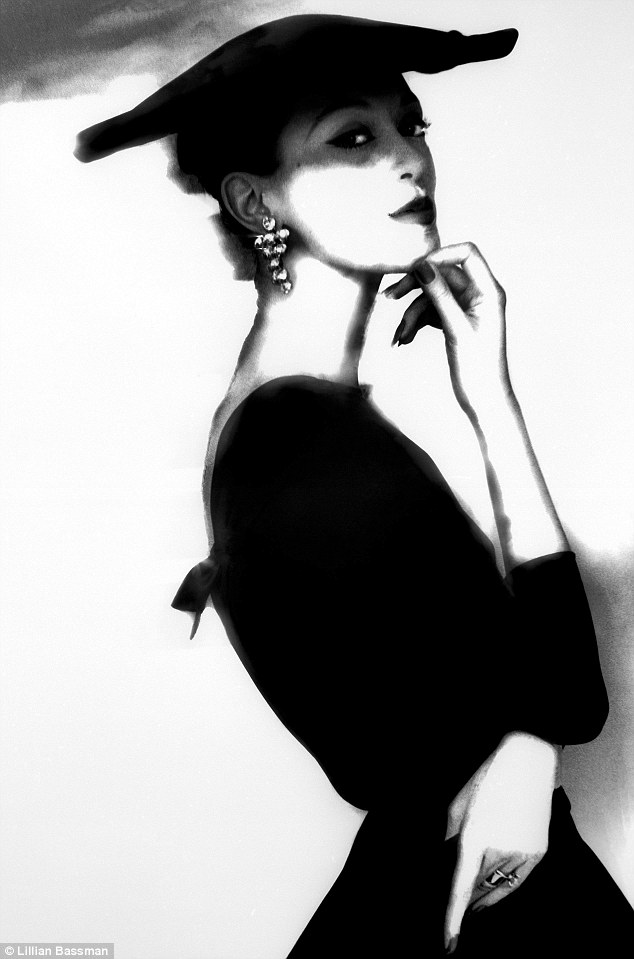 Genevieve Jones: How did you decide to write a book about Barbara Mullen?

John-Michael O’Sullivan: Essentially, having met Barbara and heard her story, I couldn’t NOT try my best to tell it!  I first interviewed her for the Guardian, and they titled it something like “The Lost Beauty”, it was, you know, here’s this model that everyone’s forgotten about…

GJ: Was she really a forgotten model? I mean, did Barbara Mullen consider herself to be forgotten?

J-M O’S: Yes, but quite happily so. From Barbara Mullen’s perspective she had had a very enjoyable, very lucrative career full of incredible opportunities. She was a working class daughter of Irish American immigrants and she had earned a fortune by any standards. She’d had a very nice life in many ways, a very tough life in others so she’d done all that and she’d retired like all of her generation. They hadn’t been particularly celebrated and they hadn’t got a big reputation to lose, they had just done the job, put pictures in magazines which would be in the garbage the next day, and never had any idea of posterity or fame, so Barbara Mullen never expected to be remembered.

And really if you go back to that time most people had only heard of models such as Bettina, maybe Jean Patchett and it’s only in recent years that the internet has provided space for these women to be honoured and for these stories to start to come out. So, from Barbara Mullen’s point of view she had lots of lovely mementoes, she had made some incredible friends with people in the industry but it wasn’t something she was particularly nostalgic about and when we started doing the project she said, you’re my friend and I’m happy to do it, but I’m doing it for you.

I came back [from Switzerland, where Barbara Mullen now lives] and did the piece and I thought, I’ve learned something I didn’t know about before. I was really inspired by a photo she has in her apartment of her first modelling job and it’s not a great picture, it’s just a nice picture. But she she talked about arriving there that day and what the atmosphere was like, and because it was all long exposure, the world is moving round you, you’re an observer and you have a viewpoint no-one has ever looked at. There are hundreds of books about photographers; many books on [Irving] Penn, [Richard] Avedon, all these people, and it’s very much about the view through their lens, this maybe 40 degrees, and when you think about that single dimension the model sees the other 320 degrees.

I thought, I’ll just go to the library and I’ll find all the model’s books and read all these amazing stories. And I found there weren’t any. There are a handful of very slim memoirs from some, so Twiggy or Jean Shrimpton, more of the celebrities; Angelica Houston, so people who’d done some modelling and then also gone on to do other things in their lives to make them famous. So then, lightening struck and I thought I should do a book. I spent four years trying to get a publisher. I found an agent and we went to see many publishers. But the publishers, although they loved it, thought there wouldn’t be an audience. Fashion biography as a whole is a really slim field. It’s almost as if in the fashion industry there’s no interest in the words, we have such gorgeous imagery, the surface is the interest and why would you want to dig deeper?

Unconnected to this, I was approached by crowdfunding publishing platform Unbound who asked me for a proposal and we launched Article, a biannual menswear magazine. That went well so they came to me and said, anything more you want to talk about? And that was how it happened. We launched the Replacement Girl crowdfunder in June, on Barbara Mullen’s 90th birthday.

GJ: What format did you decide on for the book? Will it be a coffee table book or something smaller?

J-M O’S: For the photographers to release their pictures, it had to be a good quality print so it’s going to be a hardback. It’s quarto sized so quite big and you can enjoy the photos but not too big to hold in your hands and read. It’s going to be quite a substantial book, and then we’re doing special editions.

GJ: Tell me more about Barbara Mullen. What was her modelling life like?

J-M O’S: Photographers loved the fact that Barbara Mullen could be this swan but also swear like a trouper. Her signature move is to show off her neck. She says it’s an amazing hangover disguise: if your face isn’t looking great just do the neck thing and you’re fine. So you’ll see that a lot from her, a lot of neck modelling. Barbara Mullen talks a lot about that, the discrepancy between the illusion and real life.

I haven’t been photographed a lot in my life but I’ve had to do a few head shots, and with the photographers, all the focus is on you, they’re telling you nice things, and you respond to it and start to understand what works and what doesn’t, and then they get the shot and the lights go off and its back to normal. I asked Barbara Mullen, “What is that like to do every day?” and she said “Oh, it was just part of the job”, whereas many other models struggled with the lights switching off. It became something they really chased. And for Barbara Mullen it was all such a marvellous stroke of luck and it never something she became unhealthily obsessed with.

For some it became a real struggle because nine to five you were doing this amazing job and then you went home to your husband who wanted his dinner cooked like every other husband in America in the 1950s so they were living very split lives. She didn’t talk about her job to her husband’s friends because she wanted to play it down. She was the breadwinner of the family. She was making the money, and that’s not something that her friends were doing, so she learned to downplay that. Which was sad, but it was a reality of the world they were living in and how they lived. Most of the models were married to “important” men, people like bankers, so they learned very early on to be like, “Oh, I just do a bit of modelling.” Very few of the models were diva-ish off camera and in their daily lives.

GJ: Do you think this is what contributed to this stereotype of models as being unintelligent, because they downplayed their talents in this way?

J-M O’S: I think it was there from the start, so when you read about Liz Gibbons for example, she was born in the 1930s, when it [modelling] was really starting, and was very tall and very angular and she knew what suited her, “Oh, shall I try that hat?” But she was very quickly put in her place and told you’re just a body. I don’t know if that come from the world of art modelling? Because it just seems to have been there as a constant from the start. The photographer orchestrates and the designer dictates, the editor shapes the scene and you are the clay. 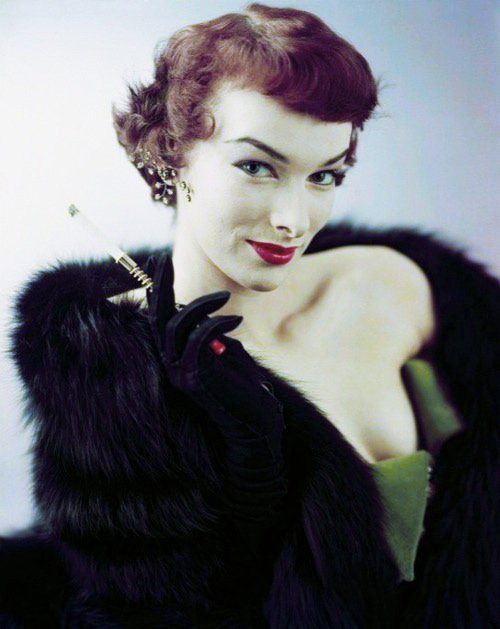 Jane Wilson was one of the biggest Abstract Expressionists of her day, but she needed to put food on the table so she became a top model and it took a long time for her reputation to recover. You have Nina de Voogt, who translated Kurt Vonnegut into French and you have Victoria von Hagen who was a nuclear scientist. They were all of different women: some were highly intelligent, some were college educated, some wrote books and some did not, but they all found themselves lumped into one group and the fact of their intelligence or not was academic.

From so many dimensions it’s an interesting thing and mostly unexplored. This group of women were the centre of everything and a lot is written around them, but the actual story of their lives has been ignored.

Every day I’m adding further layers to this story that crosses decades and continents. Most books on fashion stop when the designer stops designing, the photographer stops taking photographs or the model stops modelling. But I talked with Barbara Mullen and we decided this book has to be the whole story, so it’s also about what happens afterwards, it’s a book about Barbara Mullen ‘s whole life.

To get a first edition of The Replacement Girl: A Life in 24 Frames about the life of Barbara Mullen or a special edition of it, go to John-Michael’s Unbound crowdfunder here.

Barbara Mullen on the cover of Harper’s Bazaar. Image via That’s Not My Age.