It’s easy to see what makes Vogue such an influential magazine. This glossy fashion magazine has a pedigree which reaches back more than a hundred years and has become a fashion bible to many. Fashion brands shoot adverts using the magazine’s favourite models and photographers specifically to feature on its pages, and Vogue Magazine has become one of the most influential fashion magazine in the world. 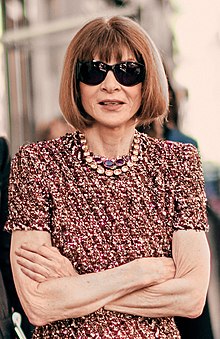 What Makes Vogue Such an Influential Magazine? Anna Wintour. Image via Wikipedia.

Fashion designers and the fashion industry rely on the opinion of Vogue’s editor in chief, most especially when it was Anna Wintour. She would be invited to see the collection before anyone else, and designers might edit out pieces or even make new ones for the show, based on what she said about it. If the collection pleased her, she would be very likely to feature it in a fashion story in a magazine and promote the designer. Especially coveted was a spot in the September issue, which is the biggest of the year and has a lot of readers. Models have reached the height of fame when they get a Vogue cover.

Vogue was originally founded in the United States in 1892 as a small weekly fashion magazine. It was doing ok, but when Condé Montrose Nast bought it in 1909, he worked on it until its circulation was high and its name was well known. He showed advertisers how effective it would be to take out an advert in the magazine, and promised them that only the richest readers subscribed. Gradually, it became the fashion and lifestyle magazine we know today.

Originally, the magazine was exported from America to Britain. Condé Nast was very proud of his magazine, and kept it to the highest standards. Eventually, Britain got its own version during WW1, when it became tricky to ship things across the Atlantic. Even so, it still had the same content as the New York version, with very few changes. Eventually, it got its own identity. Nast still stayed on top of the British edition, however, and often brought its British editors over for training in America, or promoted someone from the American office to be the British editor. His close eye was what makes Vogue such an influential magazine.

Who Were the Editors of the British Edition?

British Vogue has gone through a few editor-in-chiefs in its time. These are:

Elspeth Champcommunal, from 1916-1922. She was the first editor of the British edition. A high-society lady, she went on to become a very successful couturier after her Vogue tenure.

Dorothy Todd, from 1922-1926. Todd had ambitions to make the magazine into a very intellectual one. She was also a high-society lady, and had been trained by Nast himself at his New York office. But she was fired for being a lesbian.

Alison Settle, from 1926 – 1934. This editor was chosen to make the magazine more average, less high flown, and more middle class. At this point, the middle classes had a lot of spending money. Settle was a fashion legend.

Elizabeth Penrose, from 1935-1939. Penrose was an American editor, sent over to be Nast’s eyes and ears on the ground. She was part of what makes Vogue such an influential magazine.

Audrey Withers, from 1940-1960. Audrey Withers ran the magazine during the second world war, and for a very long time afterwards. She had worked her way up from being a sub-editor. Withers had excellent management and people skills, but wasn’t interested in fashion. She let her Fashion Editor get on with all that.

Ailsa Garland, from 1960-1964. Ailsa Garland was chosen to make Vogue even more populist. They now wanted it to appeal to young people with disposable income.

Beatrix Miller, from 1964-1984. Miss Miller, as everybody called her, edited the magazine during the Swinging Sixties and beyond. She created a fun, clever, smart magazine, that was entertaining without being either lowbrow or highbrow.

Anna Wintour, from 1985-1987. Anna Wintour came in and made the magazine sexy. She is what makes Vogue such an influential magazine now.

Elizabeth Tilberis, from 1988-1992. Tilberis was a very glamorous editor. She rose through the ranks right from an intern, a position she won in a competition in the magazine.

Alexandra Shulman, from 1992-2017. Shulman was a journalist, and she gave a lot of space in the magazine to articles. The magazine during this period wasn’t massively exciting, but it did OK.

Edward Enninful, from 2017 to the present. Enninful has made the magazine very fashionable indeed. He constantly engages with the issues of the day, and consciously gives a lot of space to marginalised voices. He is a former model and stylist. Enninful is a large part of what makes Vogue such an influential magazine today.

What makes Vogue such an influential magazine even now?

The Vogue name is so well established that everybody in the fashion world and beyond has heard of it. It has editions in many countries. Because of its good reputation, it can not only get top photographers, models, and editors to work for it, but also can interview most people it chooses. Celebrities and royalty have been on its pages, and even guest edited the magazine.

Vogue has a reputation for really stunning fashion imagery. Turning its pages, the Vogue fashion world is distinct. The current look of the magazine is very vivid, with saturated images, usually of models of colour. It has a 70s vibe to it.

In addition to the print magazine, Vogue has a leading presence on socials. A lot of people have answered its famous “73 questions” series, in which a cameraperson follows a celebrity around, filming while firing the questions at them. Recent names include Adele, Margot Robbie, Lizzo and Kylie Jenner. With such a list of top qualities, it’s easy to see what makes Vogue such an influential magazine.