Audrey Withers was the editor of Vogue from 1940 to 1960, and by that token was the most powerful woman in London during the second world war years. She worked closely with famed photographers, illustrators and writers of the day, such as Elizabeth David, Cecil Beaton, Norman Parkinson, Clifford Coffin and Christian Berard. She was a remarkable woman, who was university educated at Oxford, worked her way up from a job as a subeditor, travelled in Soviet Russia during the cold war, when few western tourists managed to get into the USSR, and was the breadwinner in the family.

Audrey Withers was the editor of British Vogue during WW2, under its US Vogue editor in chief.

Audrey Withers was born Elizabeth Audrey Withers on the 28 March 1905. She had a sister, Monica, who was five years old and a brother called Michael, five years younger. Her childhood circumstances were quite unusual. Her father, Percy Withers, was a doctor. But after only a few years of practice, he contracted pneumonia. At that time, 1911, this was a killer disease without the antibiotics to cure it.

Audrey’s mother, Mary Wolley Summers, known as Mamie, nursed him through it. She came from a wealthy family, as her father was a self made man. Her brothers inherited the business. But as Percy lay ill, one of Mamie’s brother’s came to visit. As she waved him off, she found an envelope on the hall table. In it was a cheque from her brothers for such a large amount that along with the income from her shares in the Summer’s family business, the Withers family need never worry about about money again.

It was enough pay off the medical bills, keep the house running, fully staffed with servants, and to put both Audrey and her sister through school and university. Percy pulled through but was permanently disabled, and never worked again except for a short period during WW2 when he volunteered as a doctor.

The family moved to their holiday cottage to live. Audrey and her sister loved their country home in the Lake District. Until the age of eleven she was educated at home by a governess. She also learned a great deal from her father, a nature lover, and his many visitors. One of these included the artist Paul Nash. He became her correspondent for a great many years, from the age of sixteen up until Audrey married. He was a lot older than her, and married himself. But the friendship remained just that.

From the age of 11, Audrey went to boarding school. After that, she applied to study English at Somerville, her mother’s old college, in Oxford. To her shock, she was initially turned down. She re-applied, was accepted and later , feeling like reading English was a luxury, changed her course to the more challenging Modern Greats, a subject which covered philosophy, politics and economics. and graduated with a second-class degree. 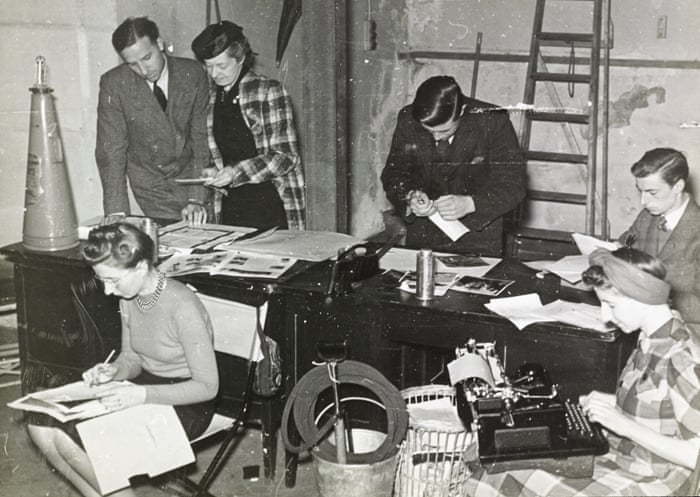 The Wartime Vogue Office. Audrey is standing on the left in a hat. Image via The Guardian.

She was determined to make her own way in the world and worked first in a bookshop, then a few jobs before interviewing as a sub-editor for Vogue in 1931. She moved up through the ranks, from sub-editor (one of many) to Managing Editor, to Editor in 1940 during the Blitz. One of the contributors, Lady Stanley, wrote to the publisher Condé Nast:

“Audrey Withers is a remarkable person. She has such balance and tact and we all admire her enormously as being editor just now must be a difficult job.”

Vogue continued publishing throughout the war. Withers usually wrote photo captions and edited the work of other writers for Vogue, but never articles. In 1940, she was commissioned to describe the conditions of working during the Blitz for American Vogue. “We grab work and paraphernalia, descend six flights of stone stairs to the basement.” She wrote. “We look as if we are going on a peculiar picnic: coats slung around our shoulders; attaché-cases with proof, photographs, layouts, copy, mixed up with gas-masks, sandwiches and knitting. The Art Department men carry under one arm a stack of drawings and layouts; and under the other, a stirrup pump, a pick axe or shovel. It’s a peculiar picnic all right.”

In 1933 she had married Alan Hay Stewart, known as Jock. He had worked at the same bookshop she did, and remained there while she made her way in the world. She always brought the bulk of the family income in. Jock’s mother and father lived with them in the same house but a separate floor, and his mother did the housekeeping for both families, which Audrey was grateful for.

In 1938 she met Victor Kennett on a trip to New York.There was an instant attraction. Jock begged her not to split up with him, and later on she said that she thought it was because he did not know how he could support himself and his parents without her. Though they stayed together, Jock began to have affairs. Eventually, in 1953, she divorced Jock and married Victor. Her married names were Mrs A. H. Stewart from 1933 to 1952 and Mrs Victor Kennett from 1953 until her death. She always kept the name Audrey Withers professionally.

What a Frightful Hat! 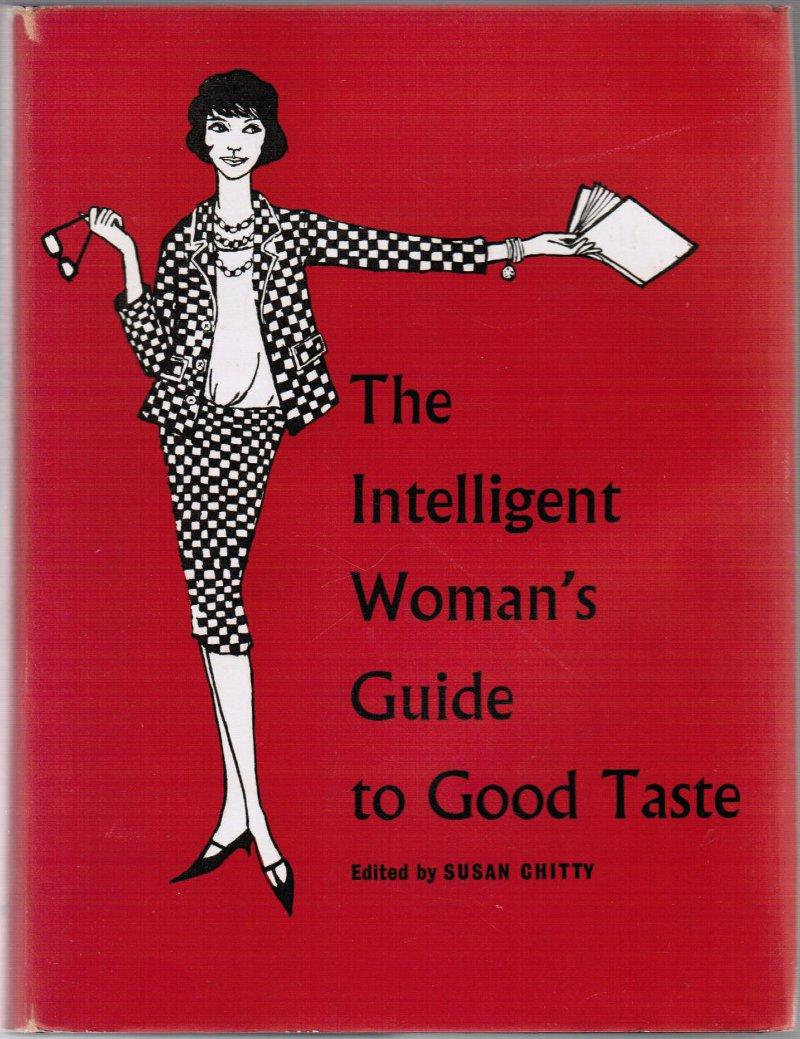 The Intelligent Woman’s Guide to Good Taste. Image via AbeBooks.

Withers did not actually feel a personal passion for fashion, and her dress sense was always more tidy than chic. In fact, she did not initially realise she was interviewing for Vogue when she answered the advertisement for her first job there as a sub. Her motivation was less to work in fashion than to support herself. Nevertheless her viewpoint on fashion was astute. In “The Intelligent Woman’s Guide to Good Taste”, published in 1958, she observed:

“Fashion in dress is nothing more nor less than ‘the way we like to look’; and fashion in the design of furniture, motor-cars, shop windows and the rest is simply ‘the way we like the things around us to look.’ There is no absolute judgement in such matters. All is relative. We stand at a certain point in history and we cannot help looking at things with blinkered eyes. We may have a sentimental feeling for the distant past, but we have a blind spot for the years that lie directly behind us. Turning over a family album, the middle-aged say, with transparent truthfulness, “I can’t imagine how I could have worn those clothes. What a frightful hat!” And they burst out laughing, with their daughters. Their mind recalls that they thought the hat entrancing; but their eye has changed, and the only possible hats are their current hats.  […]

“This first principle of dressing – to dress ‘in fashion’ – means that we choose from somewhere within that range which is, at the moment, ‘the way we like to look’. At some periods the range has been a narrow one; at others, wide – and never wider than the present, when, for example, at a party, skirts can vary from day-length to ground-level, with several distinct lengths in between. (It would be fascinating to know what the future fashion historian will make of it; and whether from this – to us – wide range of acceptability, time will whittle away the weaker elements, so that it will appear to our descendants of A.D. 2000 that we, in the fifties, were all dressed alike.)”

She was quite right, of course. For the majority of people, 1950s fashion is teenage bobbysoxers in tight sweaters and full skirts, or the grown up version, women with tightly corseted waists with full skirts. 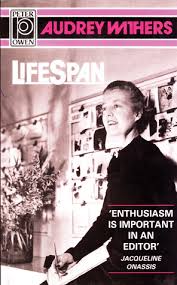 Vogue editor Audrey Withers was asked to help with Utility clothing by the Board of Trade. Vogue s war reporting was remarkable, including shots from the front line by photographer Lee Miller, and the very famous “fashion is indestructable” photograph by Clifford Coffin.

awarded an OBE in 1953. She helped to found a branch of the Women’s Press Club, as a safe place to go for women working late at night, as she did. In 1960 she resigned from Vogue. She stayed on the board of Condé Nast for a while, and also lectured, represented the British fashion industry in conferences and became a member of the Council of Industrial Design (now the Design Council).

Victor Kennett was Russian by birth, and they travelled behind the iron curtain together. Together, they wrote a travel book, The Palaces of Leningrad (1973). Wither’s  autobiography was published in 1994, entitled Lifespan.