Edna Woolman Chase was the editor in chief of three Vogues – British, American and French, beginning in 1914 with American Vogue and gradually taking on the mantle of the others until her retirement in 1952. That’s 38 years.  She was with Vogue magazine almost from its inception and made it into the success it still is today. Her influence on fashion has therefore been profound.

She was a very strong woman, who seemed to fight often with her staff – often very strong women themselves, whom she had chosen. Her personal style was ardently noted and copied, and she rose from an unremarkable, lower class background to partying with socialites and stars and influencing them.

Edna Woolman Chase was Vogue Editor in Chief from almost the beginning. 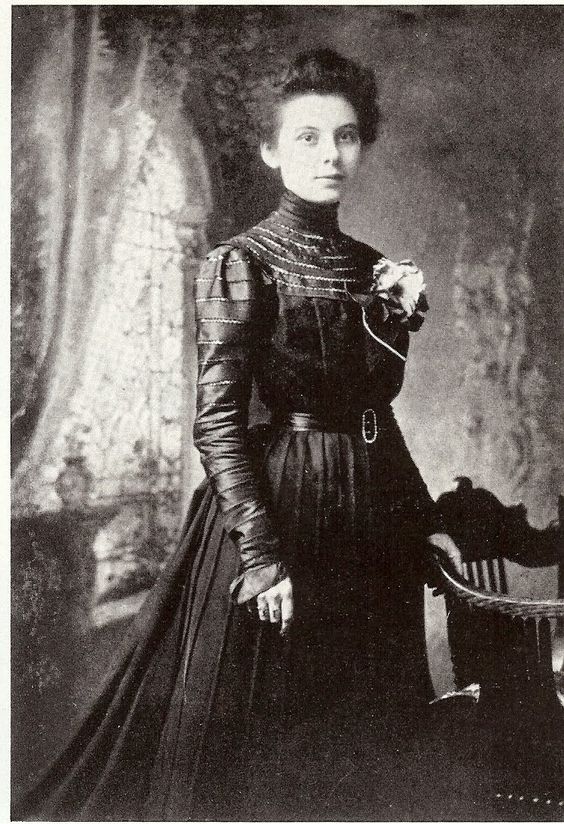 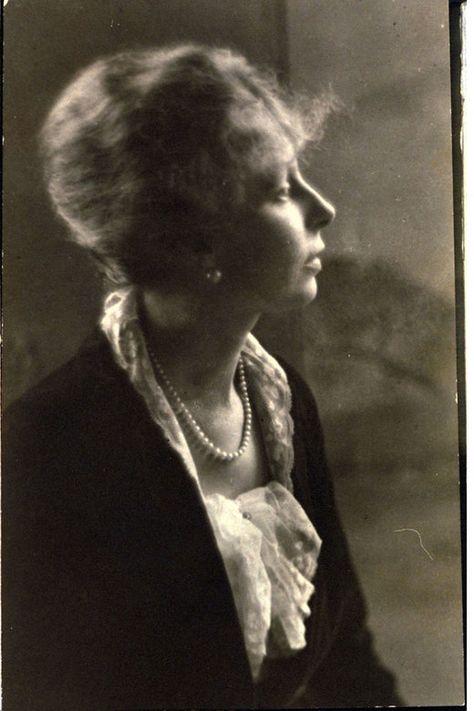 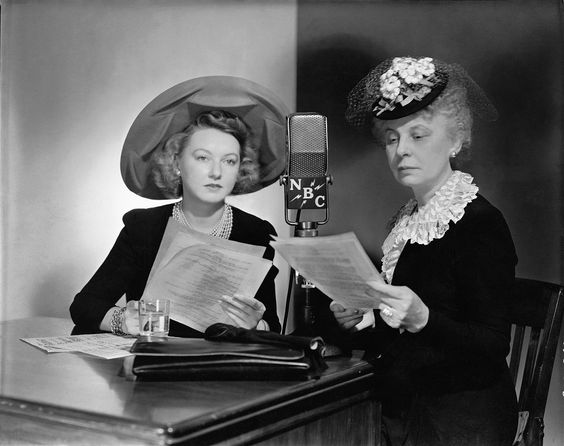 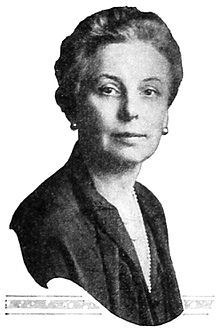 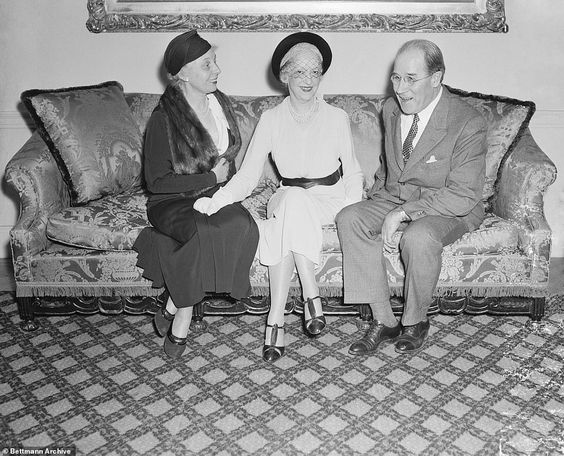 Hanging out with fashionista Elsie de Woolfe. Woolman Chase is on the left. Image via Pinterest.

Woolman Chase’s parents, Franklyn Allaway and Laura Woolman, were divorced. She lived with her Quaker grandparents in New York. They, and the rest of her extended Quaker family, wore simple clothes that, she reflected in her autobiography, she would consider the height of elegance in her later years. But as a child she was more impressed by her perfumed, corseted and bustled mother when she came to visit, along with her young cousins who were dressed in embroidered white frocks with heavy silk sashes and daydreamed of re-dressing her austere relatives in much more embellished clothing.

When she became a teenager, she moved in with her mother in New York. Her best friend, Alice, worked at Vogue. At the time it was a weekly magazine, produced by upper class people for upper class people. Edna would drop by the offices to take Alice out for lunch, and one day, since Edna was short on Christmas money, Alice suggested that she could get her a job addressing envelopes in the hallowed offices. Edna was delighted. She was eighteen years old.

This was in 1895, and the magazine was then three years old. Its founder and publisher, Arthur Baldwin Tenure, conceived that “The definite object [of this enterprise] is the establishment of a dignified, authentic journal of society, fashion and the ceremonial side of life, that is to be, for the present, mainly pictorial”.

Edna Woolman Chase loved being in the Vogue office. She was thrilled with the fashionable wives of the men who worked there when they would swing by, and overawed to be be sent on errands such as backstage to check with famous actresses whether she approved of the latest set of photos. It was only a shame that she herself felt that she didn’t fit with the fashionable ideal, having too small a bosom, despite arranging frills over it to plump it up. She describes herself as having curly brown hair, a straight nose and hazel eyes. But her mother thought her mouth was altogether too large and urged her to cover it with her hand when she smiled – or refrain from smiling altogether.

Perhaps it was this, along with her early experiences in overhearing the conversations between the publisher and the art director, which gave her her reputation as a no nonsense woman. Although she was brought up in a non swearing Quaker household, and did not herself swear, the expletive-filled arguments between the two men made an impact. They disagreed freely.

In 1900, the editor of the magazine, Josephine Redding, was let go. She was replaced by Marie Harrison. By then, Woolman Chase’s opinion was beginning to be trusted by Turnure, and he asked her about what she thought about just about everything. She began to climb the ladder, and wasn’t stuck in the post room for long.

In 1905, Turnure was approached by Condé Nast to buy out Vogue, which was then starting to become unsuccessful. In 1906 Turnure unexpectedly died. The negotiations for the magazine were protracted but in 1909 Nast acquired the magazine. He appreciated Woolman Chase’s contribution. In 1911 she became managing editor. By 1914, she was editor-in-chief. When British Vogue was launched in 1916, although it had its own editor, Elspeth Champcommunal, she oversaw it as well as her own publication, and when French Vogue was launched in 1920 she oversaw that too. Condé Nast trusted her implicitly to run his empire.

Edna Woolman Chase was known as a perfectionist and only hired the best writers, photographers, illustrators and editors. She insisted that every woman represent the fashion standards of the magazine by arrive each day in hats, white gloves, and black silk stockings. If anybody erred in their work or behaviour, a terse memo was sent. She was, however, fiercely loyal to the magazine and wouldn’t stand for any criticism of it from the outside world.

In 1914, because of the war, American was finding it hard to get Parisian fashions. Woolman Chase seized the opportunity to promote American fashions instead. She contacted dressmakers and designers in New York and mounted the first American catwalk show. This started off the reputation for New York as one of the eventual centres of fashion.

In 1928 she formed the Fashion Group International. She invited seventeen other women from the world of fashion to help promote American fashion. It became official in 1930, and still exists today. 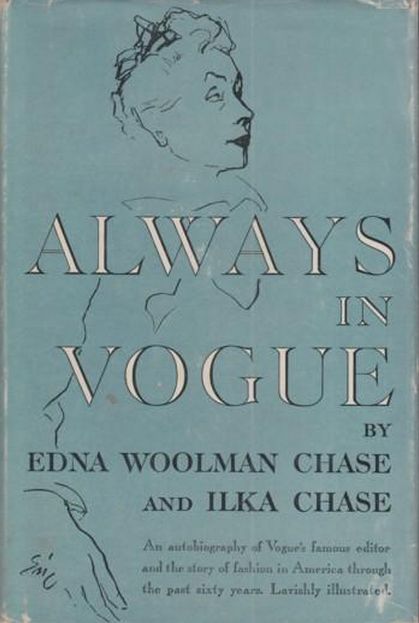 Always in Vogue by Edna Woolman Chase and Ilka Chase. 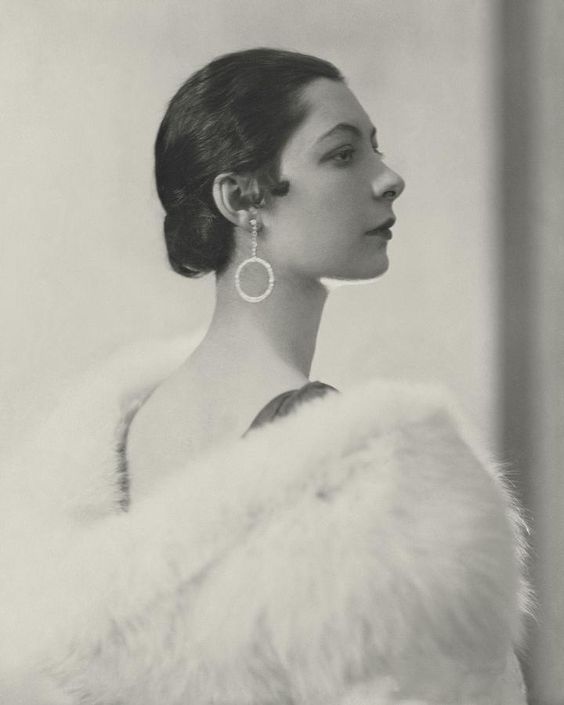 In 1902, Edna Woolman became Edna Woolman Chase when she married Francis Dane Chase. They had a daughter together in 1905, Ilka Chase, who later became an actress and writer.

Francis, who took on various jobs throughout their marriage like dry goods salesman and hotel manager could not support his family however, and she divorced him. In 1921 she married an English engineer and inventor called Richard Newton, whom she was with until he died in 1950.

Edna Woolman Chase retired as editor-in-chief of Vogue in 1952 when she was 75. She then took on chairmanship of the editorial board. In 1954, she wrote her autobiography, Always in Vogue, with her daughter.

Edna Woolman Chase died of a heart attack in 1957 whilst she was on holiday in Florida.