Marion Morehouse, born 1903 in the USA, was a very early modelling superstar. She was also an actress, appearing many times on stage and possibly in films too. She was photographed often by Edward Steichen, George Hoyningen-Huene and Cecil Beaton for Vogue and Vanity Fair in the 1920s and 1930s, and her tall, willowy, aristocratic figure had many adopting the androgynous flapper look of that the 20s is famous for. She also happened to be married to the poet e.e. Cummings. 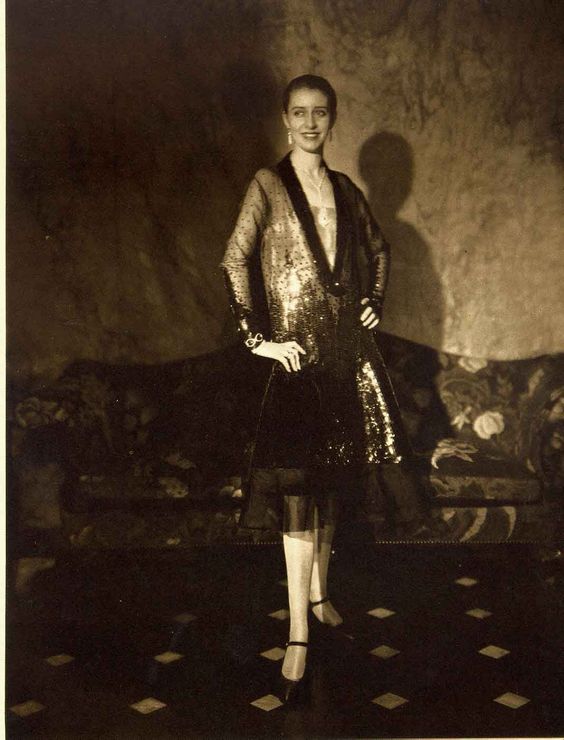 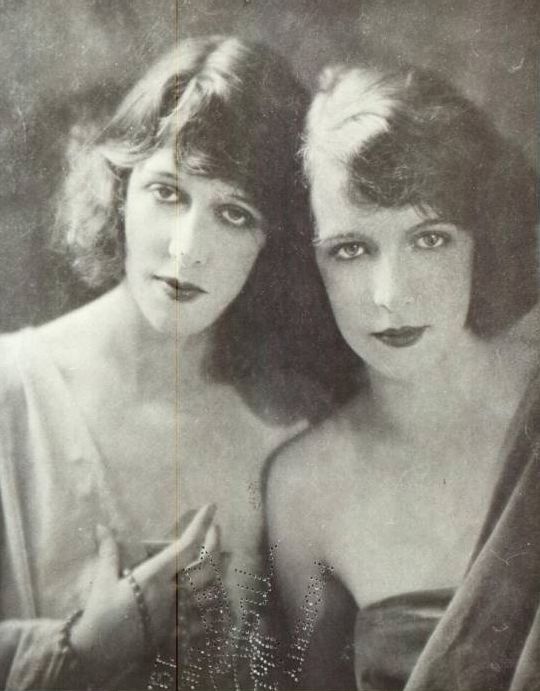 Edward Steichen was one of Vogue’s star photographers who superseded Adolf de Meyer as their favourite in fashion photography. He called Marion Morehouse “the greatest fashion model I ever shot,”and that “Miss Morehouse was no more interested in fashions as fashions than I was. But when she put on the clothes that were to be photographed, she transformed herself into a woman who really would wear that gown or that riding habit or whatever the outfit.”

Cecil Beaton, as ever, has something to say about her too: “It was not until Miss Marion Morehouse was discovered by Steichen that photographic models became so well known that they exerted an influence on the public. The aim of models at this time was to be grand ladies, and Marion Morehouse, with her particularly personal ways of twisting her neck, her fingers and feet, was at home in the grandest circumstances.”

Which says a lot about Marion’s skills as an actress. She was the daughter of a showman and actor who also, circumstances dictating, took jobs as a carpenter, odd job man, janitor and whatever else came his way. His name was Benjamin Isaac Morehouse, known as Isaac. Her mother, Annie Shortell Morehouse, did not come from elevated circumstances either. They were not married when Marion was born, and though they got hitched a year later, they had to do so in another state owing to the fact that Isaac had already been married and divorced, a fact that could cause legal complications and great delays at the time. There were also a few periods of separation (though not divorce) for Marion’s parents. 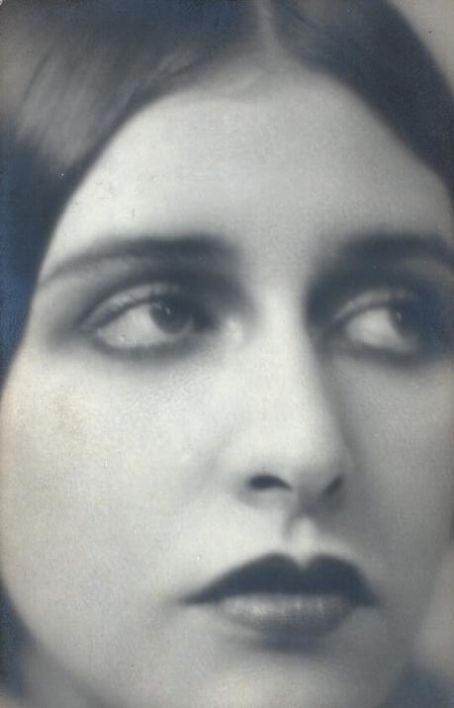 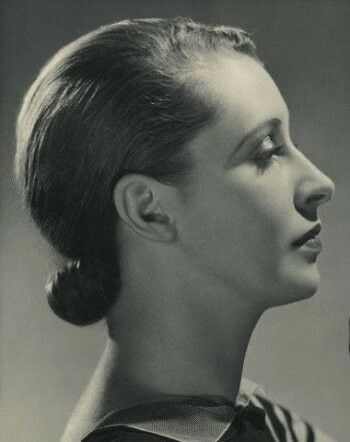 The theatre – a family business

Both Marion’s younger sister, Lillian, and her brother Benjamin worked in the theatre too. Benjamin had a job as a stage manager. Lillian was an actress and appeared in many productions, some respectable and heavyweight and others more in the Zeigfield Follies burlesque style. At least one production was co-starring with Marion herself.

From 1923 Marion Morehouse appeared in at least five Broadway productions, some of which ran to hundreds of performances. There is also speculation that she, and maybe her sister, was in the famous Zeigfield Follies. She definitely worked as a showgirl like her sister, although her height and long legs made her stand out a bit too much on the chorus line. She also claimed to have been in a film or two, and the legend is that when she appeared on set everybody stopped what they were doing to watch her. But if she was she was uncredited.

In 1924 she was spotted by Vogue. On the occasion of a visit to New York by the French couturier Jean Patou Condé Nast decided that the magazine should run a competition to prove that the American girls were just as beautiful as the French. The winner would become a house model for the designer in Paris. The competition is notable because it marks a turning point in the modelling industry: up till then, modelling, like being an actress, was a rather dingy occupation. Sure, the portraits of titled ladies appeared in magazines, and some even put on the gowns of a celebrated designer to do so. But it wasn’t a job, and if you weren’t a princess or a baroness your name would not be appearing in the caption either. 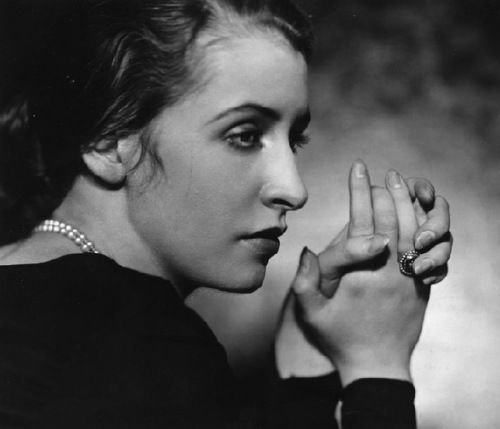 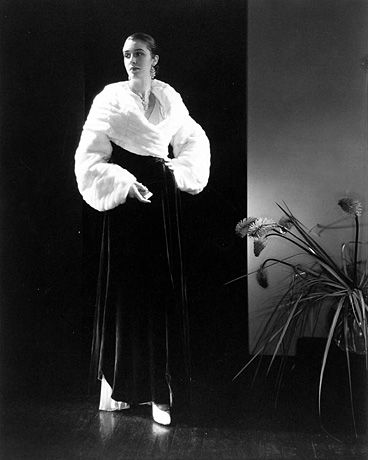 Marion Moorehouse didn’t win the competition, but Edward Steichen saw her potential instead.

She modelled for the magazines for about eight years, becoming a new kind of celebrity in the process: the model girl. Vogue started to bill her in photos: “Two mink trimmed bias panels fall from this gown of green and gold lame – a gown of great elegance and richness obtained by its gleaming fabric and intricate cut: posed by Marion Moorehouse.” 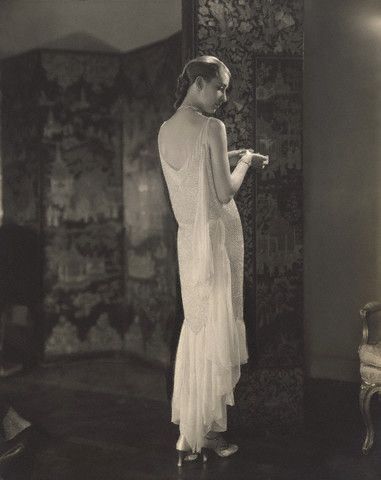 In 1932 she began a relationship with the great love of her life, e.e. Cummings. She was with him for over thirty years, though they never married. Edward Estlin Cummings, know as Estlin to his friends, was dissipated poet with two failed marriages behind him. He had a young daughter but she didn’t live with him, very probably, apart from anything else, because he had very little income and lived with his mother.

He was eight years older than Marion, whom he first saw onstage. Her lips remained sealed as to which particular production it was though, leading to speculations that it was a burlesque show, of which he was rather fond. An artist as well as poet, Cummings painted several pictures of the beautiful Marion Morehouse as well as writing about her.

But the story goes that she pursued him, whilst he, obviously attracted, was also a little intimidated and hung back.  However, once he accepted her, she was fierce in her protection of him. Marion Morehouse seems to have decided that he needed looking after and gave up her modelling and acting careers to attend to the famous poet. At one point she chased off Allen Ginsberg, who appeared at Estlin’s door, determined that the senior writer should see his work. “You. Go away. And never come back,” she said when she saw him, allowing him and many other would-be worshippers no admittance. They were together until he died in 1962. To the chagrin of Estlin’s daughter from his previous relationship, he left the income from his royalties (a very large amount per year) to Marion. 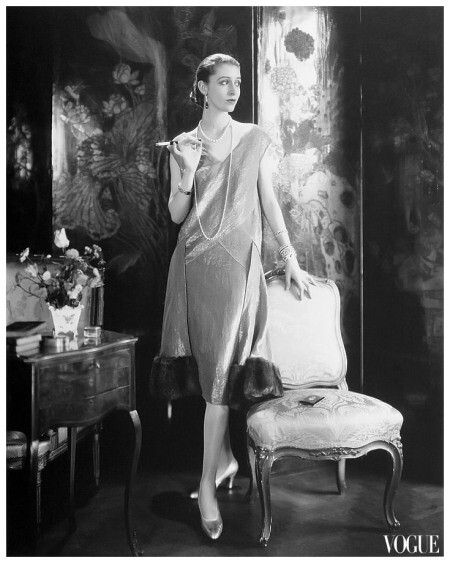 At one point earlier in her modelling career, Edward Steichen had taken a series of nude shots of Marion Morehouse. She posed wearing only long black gloves and stockings. Hearing she was “married”, Steichen burned the negatives of these photos, wanting to avoid embarrassing either her or her husband. However, when he realised her partner was that great bohemian, e.e. Cummings, he regretted it because he thought he of all people would have actually relished the pictures.

Marion Morehouse herself died in 1969. Marion willed Estlin’s royalties over to her sister Lillian, who was then living with their brother Benjamin, and they shared it together.