Eva Lutyens, the Scientist Who Became a Fashion Designer

Eva Lutyens was a 1930s couturier whose name has been all but lost. However, she dressed Wallis Simpson for her first meeting with Queen Mary and King George V – in a violet and green dress which divided opinion. She also dressed many of London’s wealthiest women and was greatly admired for her own style. She featured often in the press, and, in a most interesting career move, had originally been a brilliant scientist who had worked with Marie Curie, the pioneering anti-cancer researcher.

Eva Lutyens was born Eva Lubrzynska in Motal, Russia in about 1890. She was from a Russian Jewish family. Her uncle was Chaim Weizmann, the first president of Israel. Weizmann taught at Manchester University, and it was there that Eva gained her degree in chemistry. In 1911 she became part of the Marie Curie research team at the University of Paris and wrote a paper entitled “The condensation of aromatic aldehydes with Pyruvic Acid”, published 1913.

In 1917 she went back to Russia, and whilst there she had an affair with the writer Vladimir Nabokov. But those years were not a great time to be in Russia, especially for an upper-class woman with strong political ties. She nearly got engaged to Nabokov, but he found her ‘demanding and unsure of what she demanded, unhappy, always torturing herself’. She went back to the UK in 1920.

On visiting Cambridge with her brother Mikhail in 1920 she met Robert Lutyens. Robert was the son of the famous architect Sir Edward Lutyens. Robert was a talented interior designer and painter in his own right. Eventually, he went on to design the storefronts and interiors for the Marks and Spencer chain of stores and became part of its board of directors. Eva and Robert were married in Scotland the same year they met, 1920. They were known as one of London’s most stylish couples and moved among the upper-class elite.

They had one son called David, who, when he grew up, became a published writer. However, David was subject to ill mental health and spent periods in psychiatric hospitals. One of his close friends said he was ‘the most spectacular misfit of his generation’. 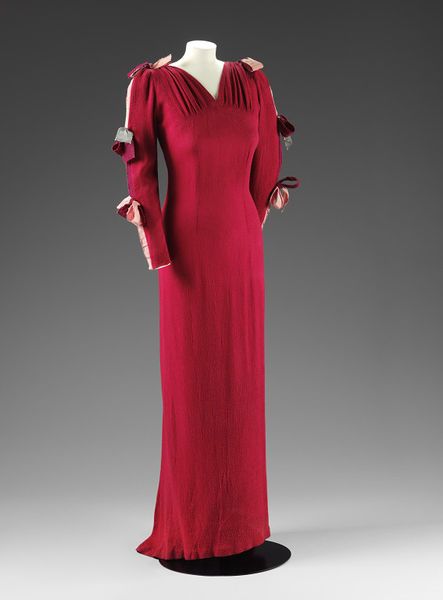 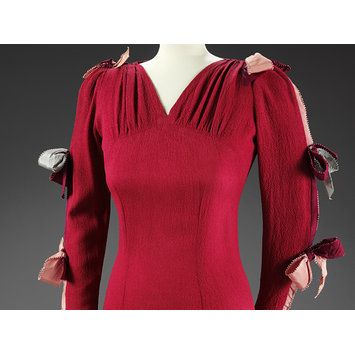 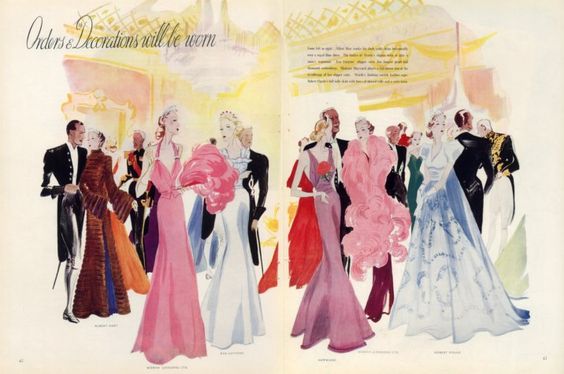 There isn’t a record of when, exactly, she gave up chemistry or when she turned to fashion design but by 1932 the “Eva Lutyens” label was established at 28 Buckingham Gate, Westminster. This prestigious address was the London house of her mother in law, Lady Emily Bulwer-Lytton, the daughter of the sometime Viceroy of India.

Having married into such a well-connected family, and with her own wealthy and high born friends, Eva was never short of clients. She was later to tell a newspaper that she had a positive disdain for other fashion designers and wouldn’t even set foot in Mayfair where the other designers set up their businesses if she could help it. She didn’t need to associate with them or the fashion business in general. Instead, she showed her collections to her exclusive clients in a salon in the house in Buckingham Gate, which was decorated in a striking and lavish manner by her husband.

Whether she wanted to be associated with the other couturiers or not, by 1934 Eva Lutyens began to be featured in the international fashion press, something she didn’t seem to mind.

It is rumoured that Eva briefly worked as a designer for Mainbocher, shortly after the launch of her own business. It might be true, but the idea might have started because Mainbocher also dressed Wallis Simpson.

Eva Lutyens loved bright and bold colour combinations. That Wallis Simpson dress, worn in 1934, was violet lamé with a vivid green sash. Wallis was delighted with it, calling it “outstanding”. Others in the Royal party judged it brash, “like its owner”.

Another surviving dress is raspberry pink silk crepe, its sleeves tied with puce, mint green and pale pink bows. Another gown, worn by the Marks and Spencer heiress Mrs I M Scheff in a late 30s photograph is quilted white lamé covered with gold motifs and with the neck edged in emeralds. These bold colours were prevented from looking vulgar in my opinion, whatever the royal gossips might say) by a very simple, though bold shapes. Thier simplicity, however, belies the amount of work and skill that went into the cutting and draping of the garments.

In her own portrait of 1937, painted by Glyn Warren Philpott, Eva wears a red brocade dress, a jacket of plum silk, and matching jewelled gold cuffs. The cuffs are carefully arranged so that they were clearly featured next to her slender white hands, which with their long fingers and carefully painted red nails were meant to denote that Eva was skilled with working with her hands in a delicate, artistic way, not one in which she was likely to chip her manicure. The cuffs were some of her prized possesions as they appeared again in a photographic portrait of 1938, and were specifically bequeathed to her sister in law in her will. Eva was one of her own best adverts and dressed in the most striking of her own designs. The press regularly commented approvingly on her appearance.

Soon after that portrait was painted, however, Eva’s business began to falter due to the Second World War. Even if you could afford a custom made dress, it was seen as rather tacky to have one, and if you did go for made to measure, it wouldn’t be in raspberry silk but a discreet grey or brown wool. In common with many couturiers of the period, Eva’s work didn’t really pick up again until the 1950s.

In 1948 she divorced Lutyens. He had been cheating on her with a much younger woman. She kept their London apartment at 15 Palace Street, St James’s. The bedroom of this, decorated by Lutyens, is shown in a publicity photo of Eva: it’s all shaggy white mohair rugs, cream silk curtains lined in coral, and a huge white sleigh bed. It was famously chic. She made the address her new salon, continuing to see clients from there.

After an interesting life and career, Eva Lutyens died in 1963.