Miss Pettrigrew Lives for a Day

Miss Pettrigrew Lives for a Day (2008) is one of my favourite films – my film to watch if I’m sad or in bed with the flu. The locations are gorgeous, the costumes have pizazz, it’s almost perfectly cast. It’s lighthearted and it’s never mean but it’s still funny, and not a gun or car chase in sight. As well as this, although it’s technically a period drama, there’s not a bonnet or corset to be seen either.

Middle aged and down at heel, Miss Pettrigrew (Frances McDormand) is still opinionated and unconventional. She’s finding employment as a governess hard to come by being fired from a series of posts for her outspoken judgement on things like the daytime drinking habits of her employers, and encouraging her young charges to be rather more freethinking than they maybe ought to be. Delysia Lafosse, (Amy Adams) meanwhile, is a charming, silly, rather lovely nightclub singer who has three men on the go. When she calls the employment agency looking for a “social secretary”, Miss Pettigrew impulsively steals her details and goes to see her, thinking she wants a governess.

Miss Pettrigrew and the American Actress

Thus, their two worlds collide. Soon, dowdy Miss Pettrigrew is getting a makeover via kind Delysia and one of her admirer’s expense accounts, while Delysia enjoys the older woman’s support and advice. Miss Pettigrew finds herself gazing upon a naked young man, swearing, smoking a cigar and drinking cocktails in swift succession, none of which she’s ever done in her life before.

It’s a delightful comedy of manners, and only helped by the perfect costumes. Miss Pettrigrew arrives frizzy haired and all in mud brown with flat shoes, and picks up a lovely blue day dress in silk crepe and a similar evening dress in midnight blue velvet. Neither are low cut or showy, and though the intricately draped crepe which the three main female characters wear was more early 30s than late, I’m totally willing to forgive the costume designer (Michael O’Connor) as the dresses are unusual and one could quite imagine wearing them today. 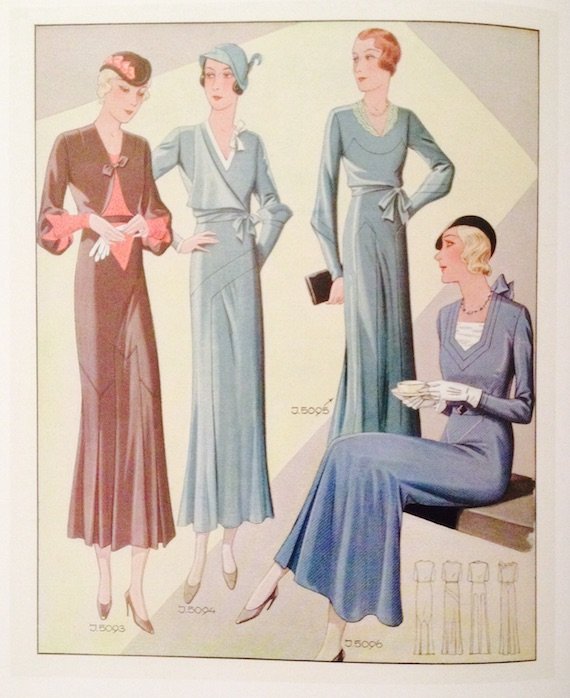 Delysia arrives in a swirl of peach satin and maribou, and though it’s not technically a costume one of my favourite scenes in Miss Pettrigrew, when she bathes wearing only a pink silk wrap wound around her red curls. She also appears in silk lingerie, a voluptuous fur coat, a duck egg blue silk crepe day dress with matching hat and maroon accents, complimented by a maroon (!) fox fur slung over on shoulder, a pink dress with crystals, a gold lame dress, and finally a strange white suit. Quite a lot of costume changes for just one day!

The sets in Miss Pettrigrew should also get a mention as they contribute strongly to the feel – a most perfect art deco living room is full of gold leaf, fur rugs and padding, along with striking impasto plaster moulding, and the bedroom is a study in hand painted silver wallpaper.

Miss Pettrigrew Lives for a Day is perfect fodder for a Sunday night alone with the ice cream tub – worth seeking out.

Miss Pettigrew in her mud brown,
Delysia in peach satin.