Gabrielle “Coco” Chanel was born on the 19th August 1883, although her age could change at will. “My age varies according to the days and the people I happen to be with. When I’m bored I feel very old, and since I’m extremely bored with you I’m going to be a thousand years old in five minutes,” she told one enquirer.

Coco Chanel was born one of six children, and although her mother died when she was young, as did one sibling, and her father left her in an orphanage to be brought up by nuns, this was not a romantic enough back story for her and she constantly made up other versions, in which she and her sister (she didn’t mention the others) were brought up by strict aunties who made her wear chic black alpaca suits and cloche hats, and from whom she stole away to ride wild horses and be kissed ardently by amorous cousins and shocked everyone with her miraculously beautiful piano playing.

In fact what the nuns taught her was to sew, as being a seamstress was a useful occupation. This was further refined by her real aunt Louise, who owned a milliner’s shop and taught her how to trim and embellish hats when she visited her in the holidays. Aunt Louise also kept a store of romance stories cut from magazines. It’s easy to see where the kissing cousins and wild horses came from.

Chanel in the music hall

On leaving the orphanage, the nuns found her a job as a seamstress and shop assistant in a tailor’s shop in a garrison town. The soldiers soon started taking her out at night to the local music hall, and she was determined to get up on stage. Chanel got her wish, but she only knew two songs: “ Ko Ko Ri Ko” and “Qui qu’a vu Coco?” – a song about a girl who has lost her little dog, Coco. Ignominiously enough her nickname was born, “Coco Chanel”.

These facts she categorically denied: “[There are rumours] that I have come up from goodness knows where; from the music hall, the opera or the brothel; I’m sorry, for that would have been more amusing.”

Chanel as a kept woman

Following this, Coco Chanel has myriad versions of how she met Etienne Balsan, and ran away with him at the age of sixteen – in fact she was twenty one, but however they met she did indeed move in with the playboy at his mansion, a former abbey in Vichy called Royallieu. However, she was not there as his wife, nor even his only mistress – Balsan, a rich man who loved horses, women and the good life, had more than one live-in lover at any one time.

Coco Chanel lived at Royallieu for six years. If it isn’t true that she had to eat her meals with the servants, it is certain that she didn’t become Balsan’s favourite – that position was occupied by a famous courtesan and actresses. A beauty of the age, Emilienne d’Alencon had been mistress to both the King of Belgium, Leopold II, and to the King of England, King Edward VII. At 14 years older than her, so 35 when Chanel came to the mansion, Chanel referred to Emilienne as an “Old woman”. Balsan “Adored Emilienne d’Alencon. Beauty and youth didn’t concern him” she later remarked cattily.

But if Chanel wasn’t adored for her “youth and beauty”, she was beginning to stand out in other ways. Although she did wear the flouncy silk corseted dresses fashionable at the time which she later claimed to despise, she was also developing her own personal style, dressing for riding in perfectly fitting breeches, men’s shirts and softly knotted ties made for her by a local tailor – the start of the androgynous style that would come to influence the whole of the Western world for a time.

Whilst living with Etienne Balsan, Coco Chanel met Arthur “Boy” Capel, an Englishman, and another rich lover of women and horses. She fell in love with him. In 1909 the two men, Etienne and Boy, set her up in business with a milliner’s shop, selling the hats which Chanel was already designing for her own wear. To modern eyes, these hats look pretty dramatic, with wide brims and large plumes, but they were in fact quite austere in comparison with the frills and furbelows in pastel colours that were fashionable at that time. 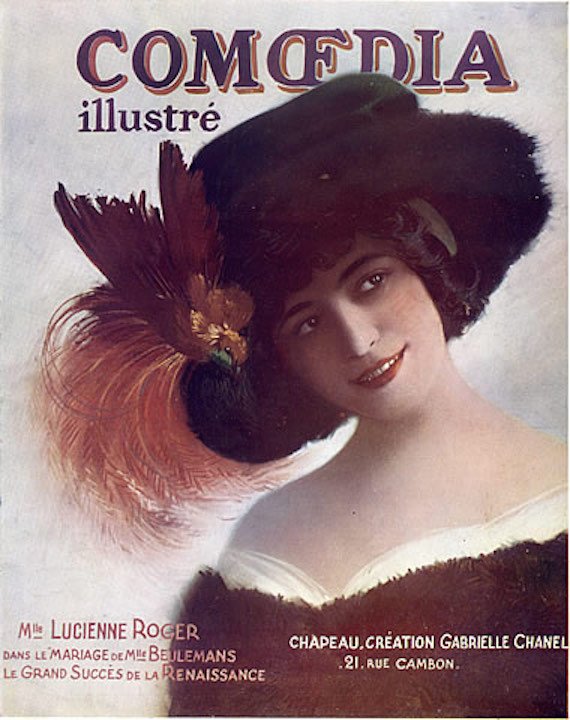 The shop, which was initially based in Etienne’s bachelor flat, and Coco Chanel’s name, became more and more successful, helped in part by Emilienne d’Alencon, that “Old woman”, wearing the hats on stage and for magazine shoots, as well as other coquettes and society women of Chanel’s acquaintance. Soon she was able to move into clothing, into sweaters and accessories. Partly these again were inspired by her own style, but perhaps this style would never have taken off if it weren’t for the first world war.

It meant fabric restrictions, for one, meaning humble cotton jersey was one of the only fabrics she could get hold hold of in sufficient quantity for manufacture. As well as this, it seemed inappropriate to many to wear flashy silks and jewels in such sad times, and though Chanel’s clothes were still both expertly cut and created and very expensive, they weren’t showy, and they fitted the war time mood well.

Once war was past and fashion erupted into a joyous riot of colour, courtesy of Paul Poiret and Mariano Fortuny, Chanel saw red, or more accurately, black. She says that she created the famous Little Black Dress around 1920, saying that as she surveyed the audience at the opera “Those reds, those greens, those electric blues made me feel ill. These colours are impossible. These women, I’m bloody well going to dress them in black … I imposed black; it’s still going strong today, for black wipes out everything else around.”

(In actual fact, Chanel’s first LBD appeared in Vogue in 1926, and it wasn’t the first to appear in a magazine or on the increasingly popular silver screen. However, she did do much to popularise it.)

Coco Chanel on making her fortune

Chanel’s business was at first subsidised in secret by Boy Capel, but on learning this Chanel was quite horrified. “I felt sick. I glanced at the pretty things I had bought with what I thought were my profits. So all that had been paid for by him! I began to hate this well brought up man who was paying for me.” The next day she went to her shop and announced to her head seamstress “Angele, I am not here to have fun, or to spend money like water. I am here to make a fortune.” And of course, in time, she did.

Chanel was, at the time, living with Capel, as she had with Balsan before. Even while pursuing affairs with other women (which she claimed to encourage), Boy promised her marriage. It never materialised, and he soon married an English noblewoman and beauty, Diana Wyndham, whilst maintaining his relationship with Chanel. When he died in a car crash in 1919, the rising couturier was heartbroken.

Coco Chanel went on to have other men in her life, and perhaps one woman too, (Misia Sert, a whole other story) but she did not marry, and was never in love as she was with Boy.

A portrait of Etienne Balsan.

Chanel and Etienne Balsan and a groom in riding outfits.

Frémont in a hat by Chanel.

Chanel’s Little Black Dress in teh original and as sketched by Karl Lagerfeld.