John Redfern or Redfern Ltd was a couture house that took the fashion world by storm in the 19th century.It wasn’t the first English couture house in Paris but it certainly made waves.

The Redfern family were from Cowes on the Isle of Wight and soon expanded their couture line across Europe.John’s father was also a tailor and he and his brothers followed in his footsteps.

By the latter half of the 1890s Redfern had expanded his tailoring business across London, Edinburgh, Paris and New York.

Redfern didn’t just make clothes for men, but for women, and successfully made smart, tailored clothes a serious fashion choice for women.

Originally, the tailored clothing was created to serve a purpose, and that was sportswear.

The yachting dress or suit was a real success and eventually would go on to become the number one sportswear label, much like Adidas and Puma are today.

They wouldn’t be as successful in America as they would have wanted, however they managed moderate success with a side-line in corsets and by importing successful Parisian brands.

In the early 1870s silk dresses and mourning clothes were added to their tailoring business which proved to be a great success.

Mourning clothes were of great importance during the 19th century, with a strict dress code that would have to be adhered to according to the social norms of the time.Wearing mourning clothes could go on for several years after death.

There were different stages of mourning which were full or half mourning and other more subtle muted colours could be introduced if a widow was in half mourning.

Mourning clothes then were big business as widows were expected wear black for anything up to four years.However, it wasn’t just silk dresses and mourning clothes that sealed Redfern’s success.

Their tailored sportswear clothes were what made Redfern so popular.They were beautifully made that women often wore them as everyday wear. Their yachting and tennis dresses and suits were particularly popular.

The Redferns made a travelling dress for Lillie Langtry in 1879 which proved so successful that several copies were made and continued to be popular for several years. 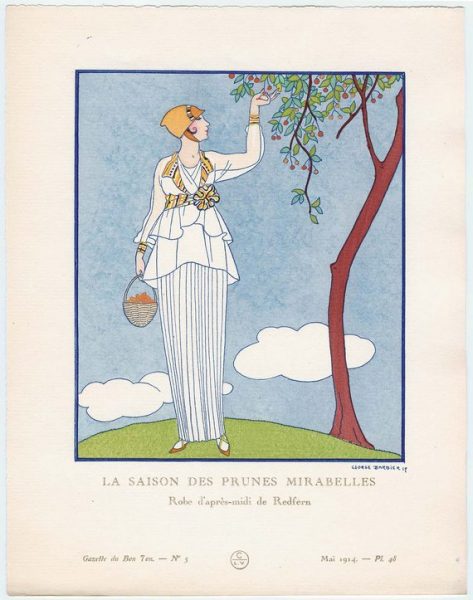 In 1888 John was eventually named dressmaker by Royal Appointment to the Queen and the Princess of Wales.

They also popularised the Grecian style high waisted dresses of the early 20th century, and from 1910 onwards advertised their clothes in the Gazette du Bon Ton in the form of illustrations.

In 1916 they designed the first official uniform for women in the Red Cross.The Redfern Limited Paris headquarters would close in 1932, opened again in 1936 and eventually closed for good in 1940.

The Redferns were perhaps one of the first successful English couturiers in the 19th century who made clothes for women to wear that were far less restrictive and conservative that before.

It would be a brief taster of the more relaxed ways of dressing that would come with the 20th century.