Ludmila Feodoseyevna, known as just Lud, was a stunning Russian beauty, described as a “Lethally beautiful Medea”. She was a very bad-tempered supermodel of the 1930s and 40s whom Coco Chanel and Elsa Schiaparelli fought over to have model their clothes. She was also a photo model, featured in Vogue and Harper’s Bazaar and photographed by Horst P Horst, who discovered her, Edward Steichen, George Hoyningen-Huene and Cecil Beaton. Her most famous photograph is also Horst’s, where she is dressed in a white gown by Alix and stands between two marble pillars. It is a photograph which is often used to sum up the elegance of the 1930s. 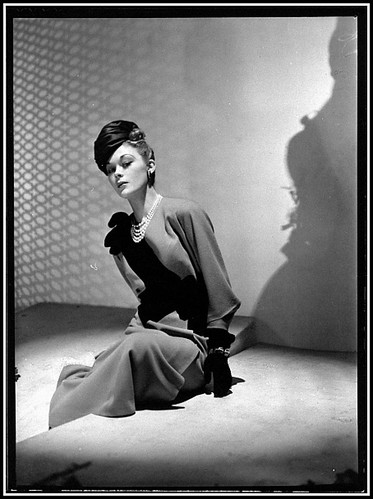 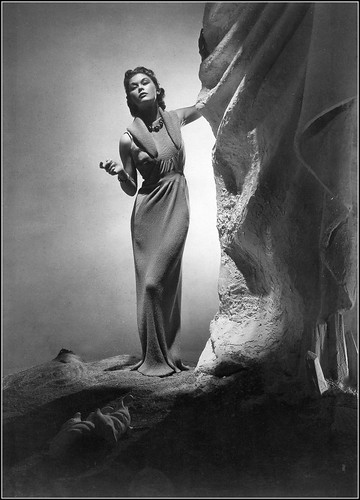 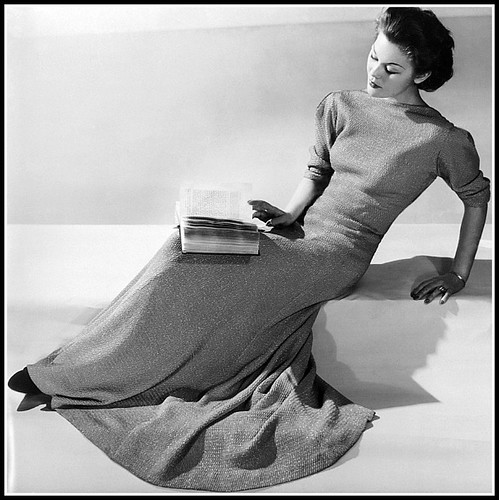 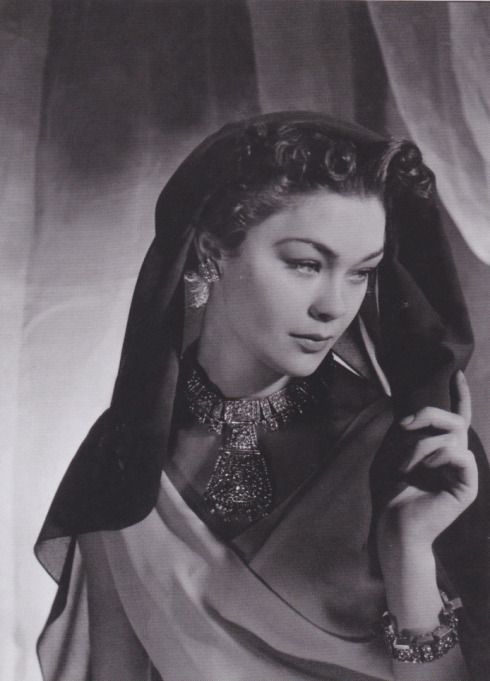 By Horst P Horst in 1937. Image via Agnauta Couture.

Lud was born in St Petersburg in 1913. Her father was a vice-governor of the Vladimir province. The family escaped Russia because of the Russian Revolution of 1917. First living in the Crimea, they moved to Constantinople, Greece and finally France, where Lud had very good grades at school and planned to study Philology at University. In the meantime, she had to help her now widowed mother make ends meet, and took a job as a bicycle messenger at the age of 18 in 1931. In delivering gowns to one of Vogue’s Paris studios for a shoot she became lost. The photographer Horst P. Horst, seeing her sitting on a wall, stopped and offered to help and she threw the gowns at him in a temper tantrum.

“I immediately wanted to use her as a model… She revolutionised the look of the model. She was not at all remote or cold, not at all like a sleepwalker; she was sensual and catlike,”

He offered to shoot her, thinking she’d be flattered, but she didn’t want to and took a lot of persuasion. When she finally relented, Horst’s boss, Conde Nast, took some persuasion to print the pictures since the convention was to show pictures of titled or famous ladies, not Russian refugees without a penny to their names. By the time Lud was the biggest model of her era Nast fell in love and proposed – she turned him down.

From this start she became one of Horst’s favourite models and he was her favourite photographer – it was said that she rarely smiled and when she did, just a little, it was only for Horst. It is also said that she was rather in love with the photographer, though if so it was only reciprocated by the amount of flattering photos he took of her, and the way he put up with her waywardness.

Lud knew what she wanted and would pick through the rails of clothes at a shoot, only wearing the ones she liked. If a photographer insisted on putting her in another she would deliberately ruin the picture. But put another way, Lud was strong-minded and fearless. Her daughter described her as fearing nothing and no one, never hesitating to sail a boat out onto a stormy lake or take a stroll through a crime-ridden Paris street. Lud was in love with living: “She was the daughter of Epicurus”.

Physically, Lud was extremely tall and slender. She had plastic surgery on her thighs and breasts to bring her even closer to Horst’s ideal woman, but unfortunately a botched job made her nipples point in different directions so that she could not wear very low-cut dresses. However, this hardly marred her appeal – she had dark hair, full lips, high Slavic cheekbones and her eyes, which slanted upwards, reflected her moods, ranging from icy blue to warm sapphire.

The Fascination of the Russian

Russian émigrés, often exiled aristocracy, were a subject of great fascination amongst Paris high society, and couturiers often used them as models. Lud began with the house of Countess Vera Borea, then Jean Patou. Soon Lud was modelling for Coco Chanel for her grand twice yearly shows (not the ordinary salon shows) and Chanel paid her to wear her clothes in daily life and out in the evenings. Elsa Schiaparelli did exactly the same. Both couturiers wanted Lud exclusively, but Lud wouldn’t capitulate. Of all the beautiful Russians working in fashion at the time, Lud was the highest paid.

Lud worked in fashion during the Occupation of France, and was considered to be the main competitor to Third Reich models. She also moved into films. Lud married a French Marquis and had a daughter, but the marriage broke up. She then married a naval engineer, and she moved to Argentina just before Paris was liberated in 1944. Later she went with her husband to the United States. That marriage was also dissolved. Rumour has it that she then married a lion tamer and travelled the world.

In the 1950s, she returned to Paris and began to work for Balenciaga. However, by then she had put on weight and lost her poise, troubled by her husband’s problems – he had been charged with black marketeering. The jobs were no longer coming thick and fast. She still expected to live as well as she always had, however, and it led to debt. She took a job at the Slederella Beauty Institute, with extra work in the chorus of the Paris opera.

By 1959 she had moved to the down at heel resort town of Le Touquet, working as an airport clerk. From there she moved to the head of curriculum at a private school, and then found herself working as the director of a home for retired Russian émigrés – one of whom had been a fellow model, the Princess Maria Eristova.

Lud never stopped adventuring though. In 1982, she married a childhood friend and lived with him in the French Alps until her death from cancer in 1990.