Elizabeth Taylor – film star, as famous for her marriages and bling as her acting. We’re talking diamonds, eyeliner, fur and lots of lipstick, strange head dresses and the occasional Dior gown commission, her style did not always remain the same, but one thing never changed, she was always glamorous. 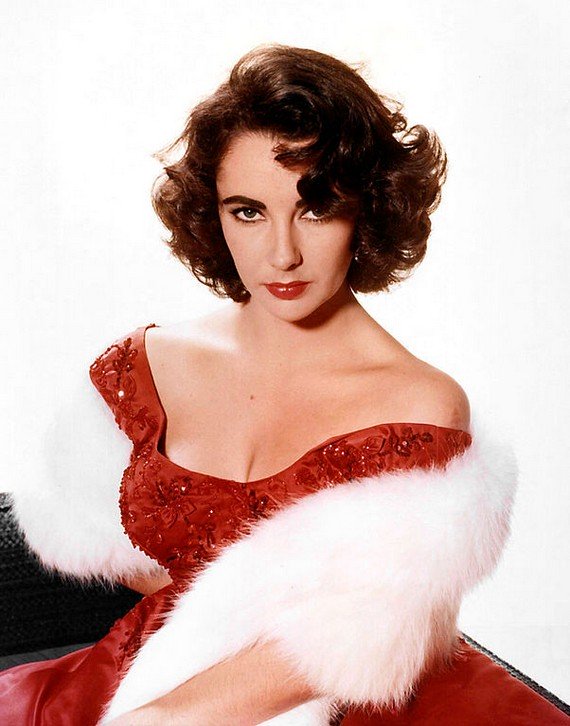 Like Garbo, two decades before her, Elizabeth Taylor was considered the Most Beautiful Woman in the World, (voted however, rather than placed in the Guinness Book of Records as Garbo was). Her diamonds were so big they looked almost false, and although fur may have been gradually losing its popularity, she wore it unapologetically. No one else could do a red carpet extravaganza like Liz Taylor, she was the queen of glamour.

In the 80s she wore gowns with padded shoulders and taffeta, always cinched in at the waist to show off her famous curves. She wore wide leg trousers and kaftans as the quintessentially comfy look, as part of her more relaxed style in later years, and who gave the wiggle dress, that sexy cinched in dress more glamour than Elizabeth Taylor in the fifties?

Of course there was also that strapless white gown designed exclusively for her in the film “A Place in the Sun” by Edith Head, a template for future prom dresses, thanks to Head’s designs and Elizabeth Taylor’s stunning figure.

Later we’d have the lacy slip from Butterfield 8 with Elizabeth Taylor’s figure hugging silk and lace slip hugging her hips and chest, as she leaned casually against a door frame, one hip jutting out and a glass of whisky in her hands.

Those hats that Elizabeth Taylor wore in the sixties and seventies? Fur hats, turbans and who can forget that amazing head-piece she wore, and yes Richard Taylor wore a cape that day too, who can forget that? Her tiaras, pillbox hats, wide brims and those flower headdresses. Taylor was extravagant in her day and evening wear and much of what she wore in public was ostentatious and loud.

Elizabeth Taylor – Beautiful and a sense of humour

But yes, Elizabeth Taylor could get away with it, she was extraordinarily beautiful in a way, that had she wanted to, she could have walked the streets barefoot without makeup, and still looked beautiful. She got away with the outlandish costumes because she could. A woman less beautiful than her, less confident, could not have dressed as she did. She was Cleopatra and Virginia Woolf, the tigress and the pussycat, the hunter and the hunted.

Elizabeth Taylor never took herself too seriously, there was always an element of tongue-in-cheek humour about her, “Oh look what I’m wearing this time” look and a devil-may-care attitude to go with it.

Rich and glamorous yes, but just like one of us

In many ways despite her riches, and her many husbands, Elizabeth Taylor was just like one of us, just as capable of messing up her life and making mistakes. She never made any attempt to hide that, she was lovable, playful and flirtatious and loved by as many women as men.

Want some of what Elizabeth Taylor had?

If you’d like a little Elizabeth Taylor glamour, you can’t be a shrinking violet, we’re talking red nails and lips and plenty of black eyeliner to accentuate those eyes, and of course, plenty of black mascara. It’s a bold look, it’s a look that screams – just look at me!

Although Elizabeth Taylor wore fur, you don’t have to, there are plenty of good quality faux furs out there, and vintage fur is always an excellent choice, especially from the sixties and early seventies, giving a real Taylor-authentic look.

A figure hugging slip dress in black or white, a faux fur coat worn over it with satin high-heeled pumps, hair piled up with plenty of jewellery and you’re good to go. Hair pieces are optional, but Elizabeth Taylor did look good with that sixties head-piece and tiara, leaning over to whisper conspiratorially into Richard Burton’s ear.

Never be afraid to laugh at yourself, and ALWAYS believe you’re sexy and beautiful. With plenty of self-belief, a great sense of humour and plenty of diamonds – you’ll be ready to show the world who you are, just like Elizabeth Taylor did.