If you’re looking for nobility and a little dignity in your life then you need look no further than Greer Garson, who can give a little noble forties class. Garson was of Irish descent and it showed in her red hair. Her mother was Irish and her father, although born in London had Scottish parents, so the Celtic vibe was strong. Although born in London herself, she would take American citizenship in 1951. 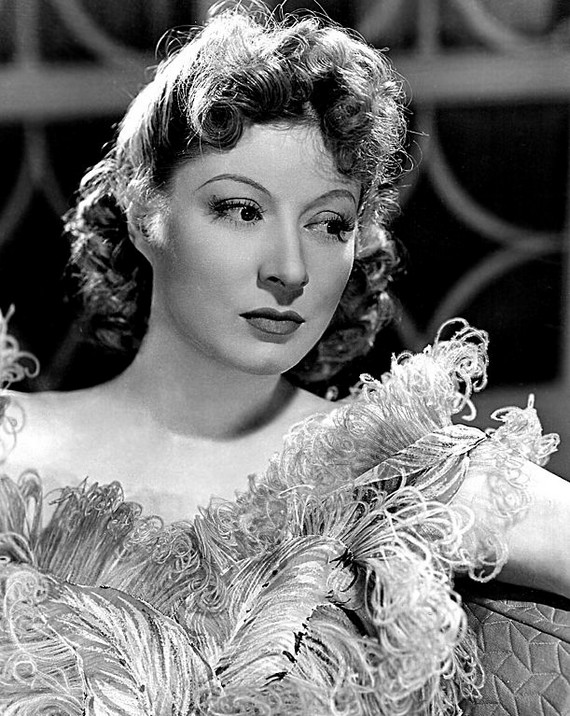 Greer Garson-Cool and collected at all times

Greer Garson never allowed her Celtic roots to upstage her and always gave a cool and polished performance, with perfect diction and believable characters. Photos often placed the light behind her, giving her an ethereal glow. She exuded sophistication and a stiff upper lip, always rising to the challenge and retaining her dignity at all times. She was a perfect female hero for the austerity of the forties.She was a great actress both on stage and in film and her cut glass bone structure, classic features and thick red hair made her as beautiful as she was talented.

Greer Garson shone in many films including Pride and Prejudice, Mrs Miniver and Goodbye Mr Chips. Roles were always intelligent lively and suited her perfectly. Her background in the theatre, back in the days when she lived in England had been a solid training ground that would set her in good stead throughout her film career.

Although her style may not be as famous as some of her peers during the forties and fifties, Garson does have a certain elegance and charm that’s worth thinking about and her look is easy to emulate.

For Greer Garson, accessories played a major part in her look, with brightly coloured gloves, wide-brimmed or pillbox hats with off the shoulder dresses, or polka dot tea dresses to the knee and a smart coat, long, elegant evening gowns with a simple necklace, two piece suits and a frilly blouse and immaculate forties hair.

Wide brimmed hats were a popular choice for Greer Garson and really showcased her bone structure perfectly, her hair would be worn loose and wavy beneath and make up was simple. The hats were either straw or came with black lace or silk. Some came with scalloped edging and although she did wear smaller hats, the wide brim was a firm favourite and it suited her perfectly. In one photo Garson is pictures in an elegant black two piece suit or dress and black wide-brimmed hat, knitting. Only Garson could still looking so poised and elegant while knitting.

Greer Garson’s eyebrows almost had a story of their own, in the thirties they were fashionably thin and straight while later on they became curved like a blow, they were a little thicker during the forties, but always had that classic Cupid bow shape to them.

Hair was in waves and pinned back above the ears in a typically forties look. Curls or waves, Greer Garsons hair was always immaculate, while also giving the impression that it could become wild and unkempt at any given moment, while she saved the day.

If you fancy some Greer Garson nobility and love a forties look, then Garson is definitely the way to go. It’s an authentic full on vintage forties fashion look, with shoulder padded tea dresses with a v neck, wide-brimmed hats, gloves, bags and wavy forties hair. Give yourself a Greer Garson make over and face that Blitz party with dignity and a stiff upper lip.