Fashion can’t use the word forever. It uses “iconic” instead. With transcending time and trends, icons never fail to awake, seduce and spin our imagination.” This quote comes from the first edition of Herself magazine, and I think it sums up the meaning of “icon” perfectly. ‘Fashion can’t use the word forever’ – forever doesn’t really exist. Trends are always changing, and people come and go as nature takes its course. However, it’s the people who leave behind them a legacy so great that makes them an icon. One such style icon was magazine editor and fashion lover Isabella Blow. 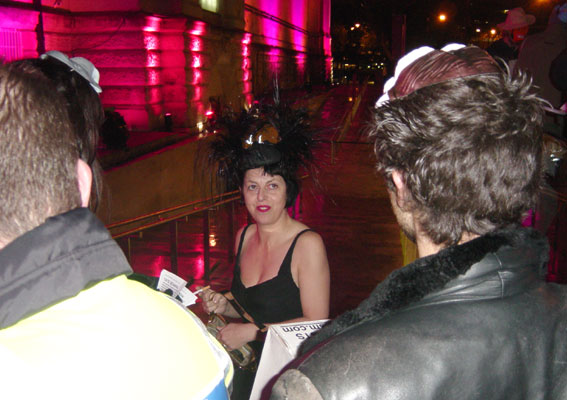 Isabella Blow was universally known for being the muse of hat designer, Philip Treacy, and after he created her wedding headdress, an extraordinary friendship blossomed. She understood his phenomenal talent before anyone else, and throughout her life she continued to support his work – his beautiful and outrageous hats became her signature staple piece adding to her flamboyant style. However, it seems there are also other reasons why she wore his over-the-top designs:

Issy, as she is also known, is credited for finding various other fashion icons such as models Sophie Dahl and Stella Tennant, and designers such as Alexander McQueen – who she also developed a strong friendship with. Realistically, Isabella was the woman behind the starting of McQueen’s career, after she bought his entire graduate collection and set him up to be one of the world’s most iconic and influential designers.

Isabella Blow on the social scene

Isabella Blow was a socialite. She loved nothing more than being surrounded by people who she held close to her heart, with famous friends such as Rupert Everett, Joan Collins, Daphne Guinness and artists Andy Warhol and Roy Lichtenstein. However she did take her job very seriously – fashion was the love of her life. She worked on numerous publications such as The Sunday Times, American Vogue and Tatler – where she was known for her provocative photo shoots.

However, Isabella Blow’s life wasn’t as glamorous as it may have seemed. For a long time she battled with depression, attempting suicide 14 times before her eventual death in 2007 at the unfortunate age of just 48 after drinking weed killer. There are also reports that she was suffering with ovarian cancer at the time.

Memoirs of a fashion icon

In a 2010 memoir about Issy’s life, ‘Blow by Blow’, written by her husband, Detmar Blow, evidence suggests that her depression seems to stem all the way back to her childhood. It was something she had to deal with her entire life, and despite how she felt inside she always managed to put on a brave face. Just days before her untimely death, Isabella Blow posed as Joan of Arc for a photo shoot in Vanity Fair which displayed some of the great current fashion icons. According to Detmar, “Looking at the picture now, I realize Issie was already preparing herself for her last performance: the shoot was her dramatic farewell to a cruel world.”

Isabella Blow was buried in a McQueen outfit, and a special Philip Treacy hat was made to rest on top of her coffin. “Isabella believed a good funeral is like a great wedding. But when you go, you go. You only go once” says Treacy. So why not do it in style eh?

Gone but not forgotten

isabella blow has not been forgotten since her death. McQueen dedicated his Spring/Summer 2008 show to Issy, and even collaborated with Treacy to create some flamboyant headpieces to match his collection. The show space was sprayed with Isabella’s favourite Robert Piguet scent. The invitations were illustrations which depicted a triumphant Blow in a McQueen dress and Philip Treacy headdress, aboard a horse-drawn carriage ascending to heaven. Also, in 2010, Treacy confirmed that a film would be made about Isabella’s life.

Isabella Blow hasn’t really gone anywhere. Yes, she might not physically be present, however her spirit lives on through the people she reinvented. Through Philip Treacy’s hats, through McQueen’s designs, and through the legacy she left behind.