I love scissors. It’s so satisfying when you snap them closed, and they’re so shiny and so sharp. Who amongst us hasn’t given themselves a home haircut just for the thrill of the snip snap and crunch of severed strands?  Clearly, someone else loves them too. Curator Teresa Collenette must have hundreds of them in her personal collection, many of which are deployed with wit and charm in The Secret Life of Scissors. The exhibition is full of great imagery and I really regret that the day I visited I forgot my camera because I wanted to take so many pictures for you.

Located in a side room in the museum, the show is small but jam-packed. Joseph Cornell style boxes on one wall feature a few of Collenette’s favourites mounted alongside other little objects, and her lists of the types of scissors on display is like a love song. Pinking Scissors, Knot Scissors, Midwifery Scissors, Candle Snuffers, Grape Scissors, Dressmaking Shears, Paper Scissors, Hairdressing Scissors, Children’s Safety Scissors… OK, that’s quite a strange love song. 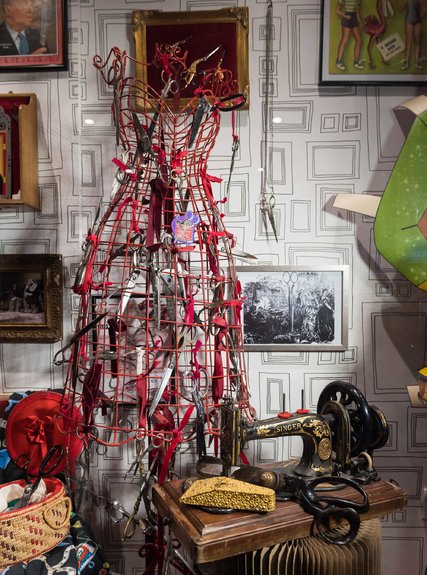 I’m not sure that Teresa Collenette mentions love in the exhibition, but there are some other pretty strong emotions there, like murder and revenge. Scissors are such a female tool because of their long association with sewing. So there is quite a long fascination with women turning and using these dainty little blades for terrible purposes.

One part of the display shows some great schlocky 60s posters with evil females wielding scissors, and I didn’t quite understand the Red Riding Hood reference but I’m guessing she did away with the big bad wolf by snipping off his skin using her handy sewing kit, or something just as gruesome.  Alfred Hitchcock, speaking of his film “Dial M for Murder,” said: “A murder without gleaming scissors is like asparagus without hollandaise sauce. 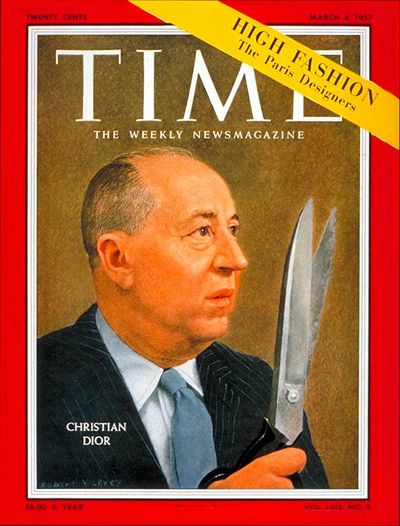 Christian Dior on the cover of Time Magazine. Image via Pinterest. 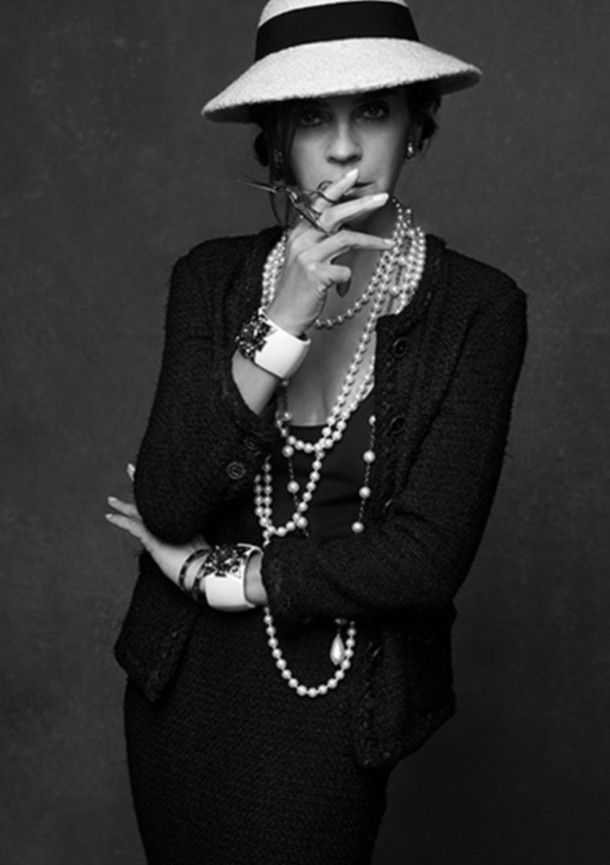 In portraits, people’s occupations (or pre-occupations, if they were the moneyed sort) have often been seen alongside the sitter. Sometimes this is a literal depiction, as in the landowner depicted on his vast estate, alongside his wife and progeny. But sometimes the sitter holds something to symbolise his job: the distinguished naval captain with his map and charts, the writer with his quill, or the philosopher with his thinking cap.

It’s not often that lowly tradespeople get their own portrait, which may be why Giovanni Battista Moroni’s The Tailor (‘Il Tagliapanni’) of 1565-70 is so famous and fascinating. It’s also the man himself. The Tailor stares at us quite piercingly as he holds his large pair of shears.

More recently, as fashion designers have become celebrities, they too have posed with their scissors to indicate their profession. Christian Dior brandishes huge scissors on the cover of Time Magazine in 1957, whilst in response to that Carine Roitfield, styled as Chanel, did a photo shoot wielding tiny elegant scissors. Jean-Paul Gaultier, fashion designer and TV presenter made a pop video in 1989 in which scissors danced out of his grasp, illustrating his battle with the muse.

Teresa Collenette’s The Secret Life of Scissors also covers hairdressing and hairdressing scissors. A mannequin head displays a punk haircut stuck all through with scissors and the display card explains how Vidal Sassoon changed the face of the 1960s with his modish, geometric haircuts. And did you know that Pierre Toussaint, the freed Haitian slave born in 1766 who was canonised as a saint gained the wealth which he redistributed to the poor by being a great hairdresser?

There are also lots of myths and stories associated with scissors and haircutting. There’s Queen Clothilde who was offered the choice of scissors or a sword, to cut her grandson’s hair or their heads off. She chose the sword. (Samson and Delilah also springs to mind, though I’m not sure Samson’s hair, in which all his strength resided, was also shorn with scissors – surely though?) There’s also, of course, Edward Scissorhands. Giving him scissors instead of knives for fingers makes him cute, not scary. 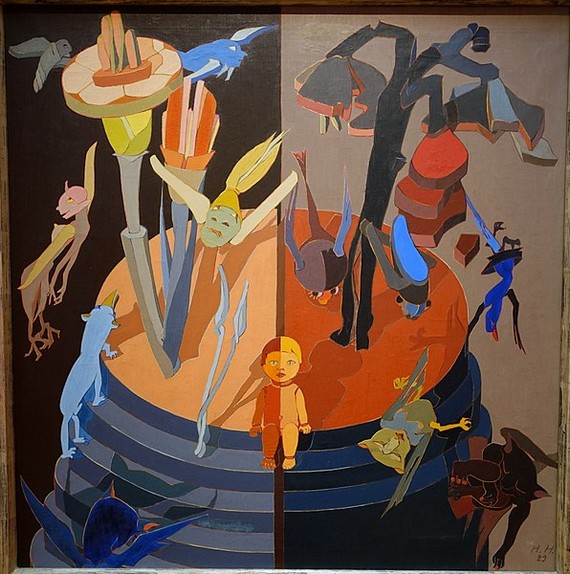 Scissors are also associated with craft and its more recent political use, craftivism. Children are taught to use scissors at an early age, and there are some lovely children’s scissors shown here, as flat as if they were cut out of a sheet of paper themselves.

Children’s books of paper dolls are probably the most fondly remembered use of scissors, but papercutting with scissors has a long artist history too – it was a Victorian parlour game to cut friend’s profile portraits from a sheet of paper, and they were very keen on decoupage too – cutting and pasting pre-printed designs onto furniture, screens and into scrap books. 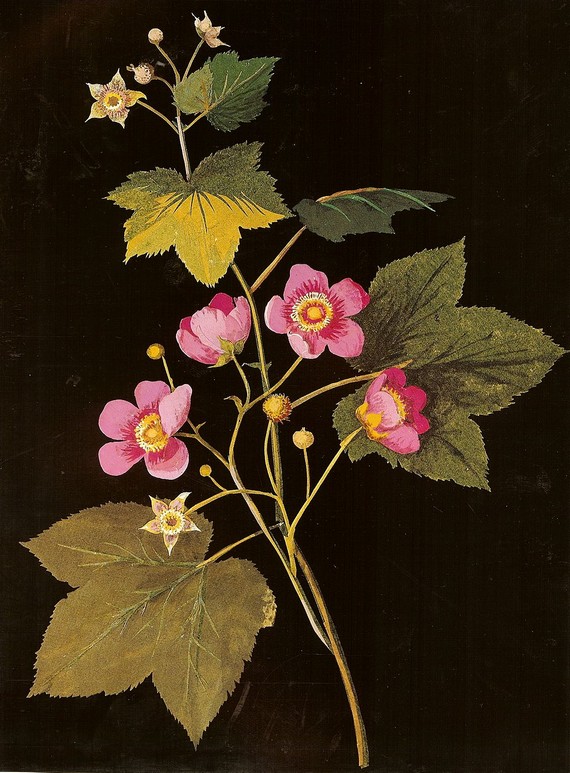 Back to Teresa Collenette’s The Secret Life of Scissors. As well as the boxes and the main display, there is also a lovely cabinet that greatly resembles an old shop display cabinet. This displays some of the work of cutler and corsetiere Grace Horne, who sometimes combines her two passions as in the scissors which, when closed, not only come to a dagger-like point but have a corseted waist at their midsection.

It is a beautiful and quite thought provoking display, above all else showing, I think, the passion of its curator, Teresa Collenette .

The Secret Life of Scissors, curated by Teresa Collenette , is at the Fashion and Textile Museum from 9th Feb 2018 – 6th May 2018

Image for The Secret Life of Scissors curated by Teresa Collenette via FTM London.