So, it was a quick trip to Paris this month to visit the inaugural exhibition of the Yves Saint Laurent Museum, opened late last year and set in his atelier just off the designer boutique lined Rue Montaigne. We walked the length of it, stopping in every so often to tread the hushing carpets of Dior, Chanel et al, attended by equally hushed and quietly friendly salespeople. We also spotted a few Hollywood actresses having lunch en route, with discreet security a few paces away.

You do not enter the Yves Saint Laurent Museum through a sliding glass door as you would any other museum. The double doors are held open for you by more black suited men, and you ascend a wide, gracious stairway, potted palms to each side, to the reception desk. It is just as his clients must have been welcomed in for their fittings. On the ground floor the ornately gilded and chandeliered pair of rooms where his fashion shows were originally held and where smaller displays for private clients were later offered still remain. Now they have lockers and seats to view a video on the couturier’s life, but they are still grand and entirely lovely, immaculately upkept like a stately home that’s actually seen a hoover. They are also decorated by portraits, by Andy Warhol amongst others, of the couturier himself. 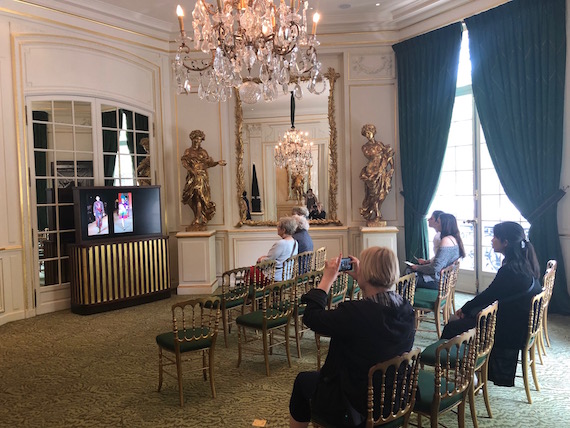 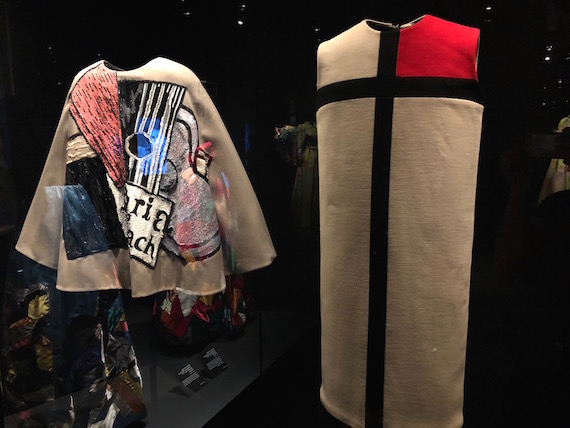 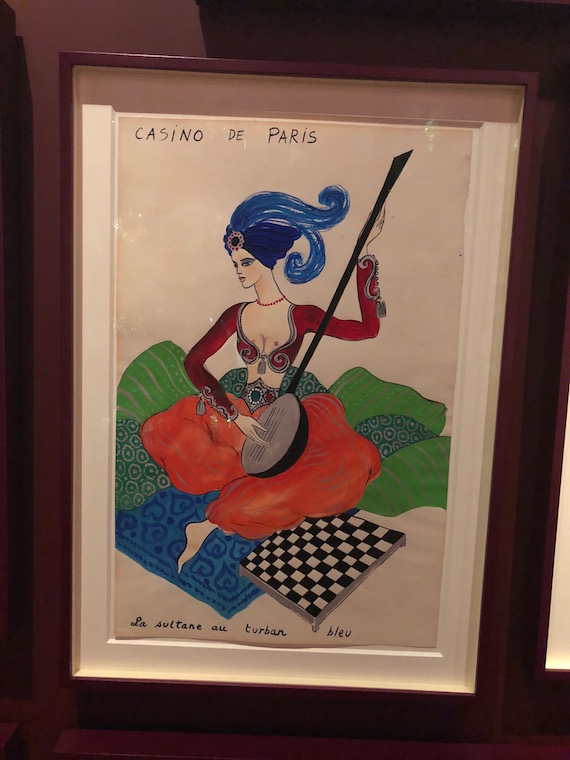 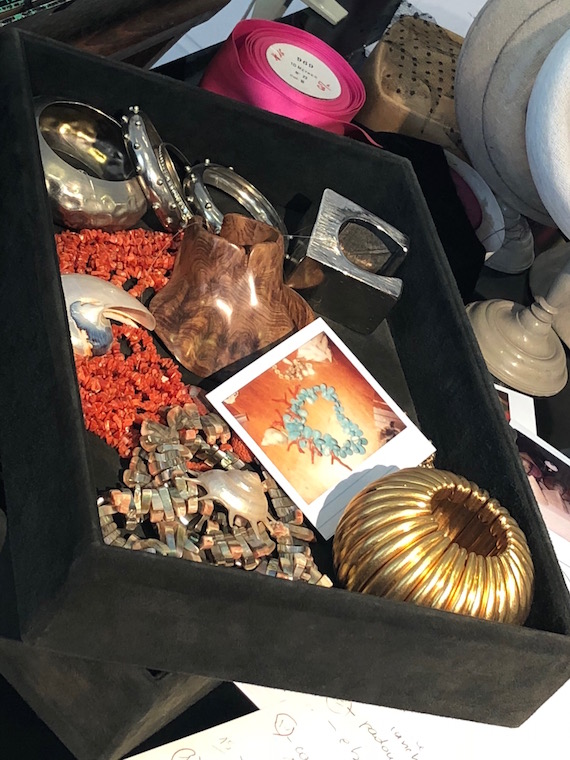 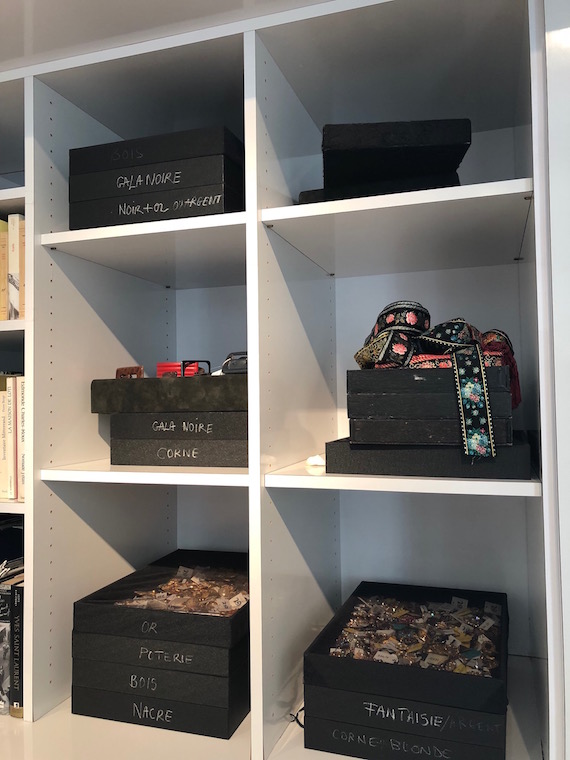 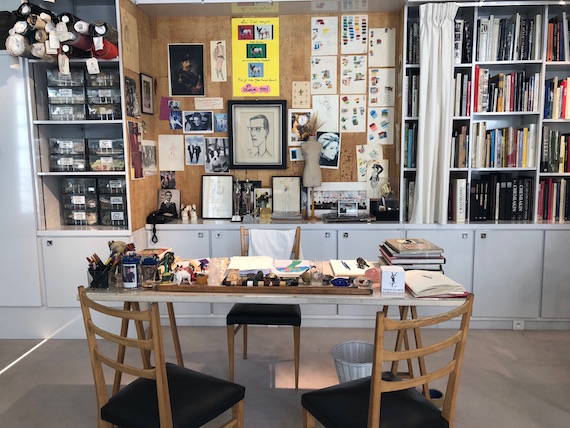 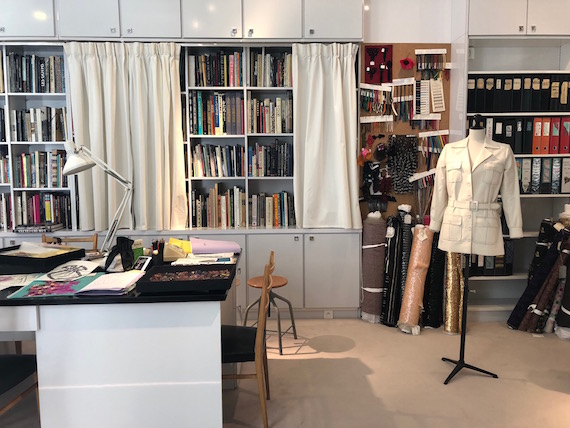 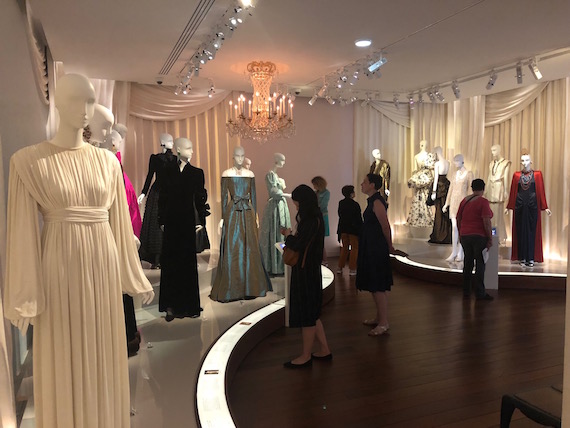 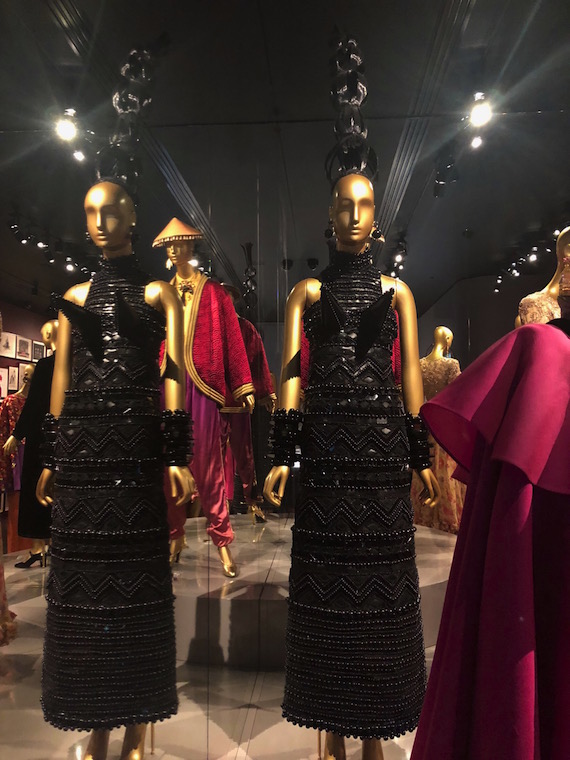 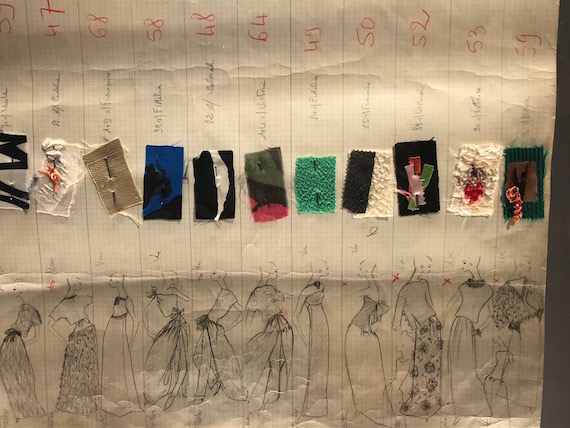 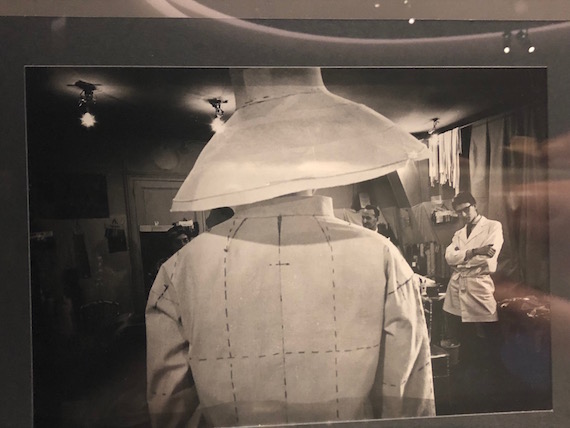 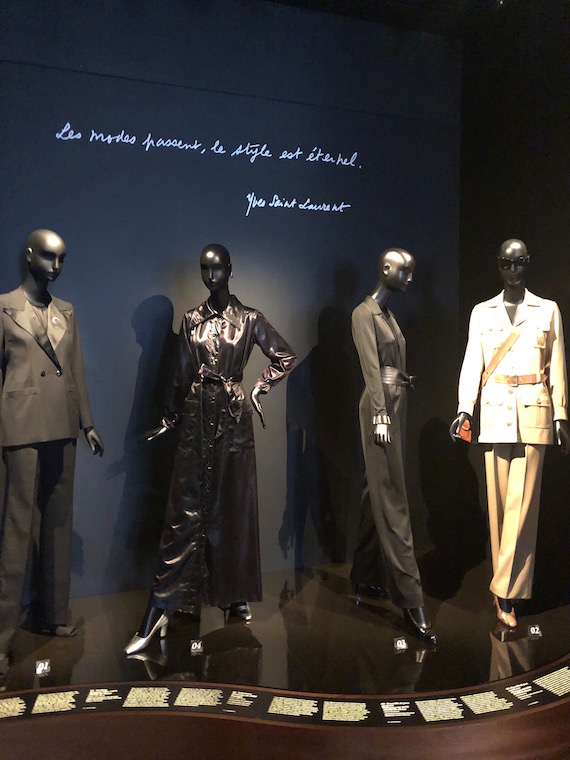 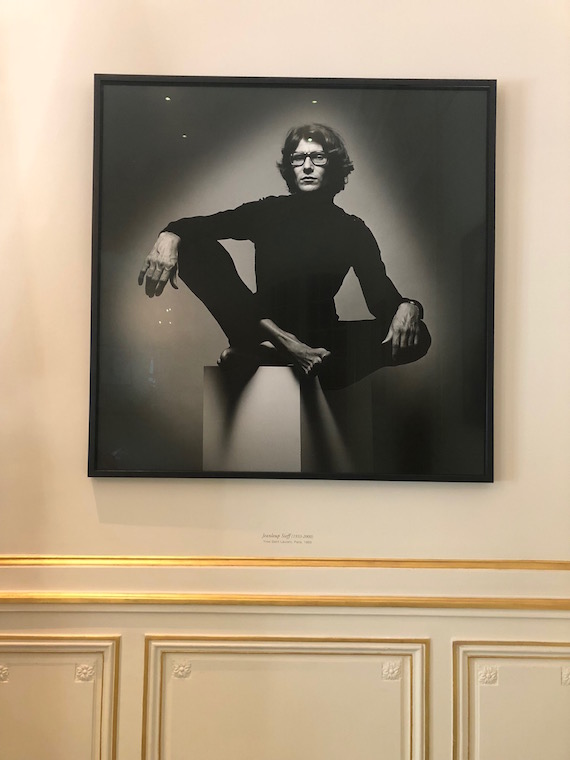 And then on into the museum itself. It is, really, quite a compact museum, showing a very few selected pieces which are each carefully chosen to make a point. Two or three tiny ground floor rooms, a larger room upstairs, a miniature cinema, his design room, a cleverly utilised corridor, a shop and a basement with yet more screens. But it is well presnted, it is beautifully lit, it is a lovely way to spend an hour or so.

The first room shows Saint Laurent’s signature styles. These are “le Smoking”, his evening tux for women, the trench coat, jumpsuit and safari suit. All four of these silhouettes began life as male attire and somehow the text implies that Yves Saint Laurent invented the idea of women wearing traditionally male clothes. Of course not.  But it is lovely to see an original le Smoking from 1971, made of matt black crepe with wide shiny satin lapels highlighted by a delicate moon brooch. There is the pin mark still of a much larger brooch that the original owner must have hung there, making this classic, restrained item a little less so.

A display case shows some terrifically atmospheric photos of Saint Laurent at work, dressing the house models in paper patterns and critically evaluating the effect. There are also sketches of his designs alongside tiny fabric swatches which they were to be made up in.

The third display highlights the relationship between the couturier and his craftsmen, the beaders and embroiders who put thousands of hours into making each article worth thousands of francs.

The next room shows Saint Laurent as an armchair traveller, taking inspiration from books about other cultures. His work took elements of Japanese, Spanish, and African costume. My favourite was a fairly straightforward translation of the Spanish matador’s costume, but made for a woman and with a flamboyant hot pink necktie and cape. The most surprising though was the dresses inspired by West Africa, with narrow conical breasts affixed to the front. These, along with delicate hair pieces that were worn with them, looked extremely avant garde for their seventies date, pre-dating Jean Paul Gaultier’s conical boob costumes by many years. There is a tiny video playing too, showing the outfits on the catwalk.

Upstairs and to a rough timeline of Saint Laurent’s later years. There is nothing outstanding or memorable here, though the dresses are well made and nicely presented. It often seems that Saint Laurent was just behind the curve – puff sleeved dresses in the very late eighties, for example, when they’d been everywhere for ages before that. And of his many historical inspirations, most seem far too close to the original. A heavy black full length gown with leg o’mutton sleeves and a chiffon modesty panel looked like it could well be a typical Victorian day dress, and the 18th century shapes looked like you’d wear them to a re-enactment society.

And from there to Yves Saint Laurent’s office and design room. A lovely room in white, panelled with mirrors and full of large bookcases, it has been arranged a little as if the designer and his long-time partner, Pierre Bergé, just slipped out. There are sketches on the tables, letters, boxes spilling passementerie. It’s very engaging, though a little like a stage set. I look out of the windows but the pair didn’t have much of view.

Along the way, I tried to slip into the cinema room twice. Each time, I was told by the beautifully dressed French attendant that I mustn’t go in right now, the film had started and I had missed the beginning. I was to miss the end too, as when I insisted on entering it was not worth anyone’s wait – a reverential documentary doubtless to be found on Youtube.

Downstairs again there were two more displays to enjoy. One, in the corridor, was, on one side, a tightly packed hanging of drawings. Some were by Saint Laurent himself, others commissioned for the house, all very lively sketches recording designs or ideas.

The Most Famous Dress of All

On the other side were wonderfully displayed jewellery. Each hovered in its own brightly lit pigeon-hole in the display case, which was built into the entire wall.

And finally, as a finishing touch, one last display on perhaps his most famous dress of all, the “Mondrian” dress of 1965. As well as Mondrian, Saint Laurent was inspired by artists like Pablo Picasso and Georges Braque, and bright patchwork and sumptuous sequinning echo their ideas. But it was the plain little Mondrian dress that made history.