The trend for femininity on the catwalks is going nowhere. This season at London Men’s Fashion Week LFWM SS18 men wore scarlet dresses, makeup and body paint, and women appeared beside the men in unisex outfits. Men’s Fashion Week is relatively new – this is its fifth anniversary – but I don’t know how long it will be until it’s redundant, as many designers feature both genders walking together at both the men’s and the women’s events. There were also several see now buy now collections.

Away from the genderbendingness, collections featured a lot of relaxed athleisure and bright colours and prints as well as traditional tailoring and trench coats. Here is the pick of the shows. Vivienne Westwood is a designer who needs no introduction. Lately she’s been talking a lot about environmentalism and urging people to abstain from buying clothes whilst presenting collections made with petrochemicals for people to buy.

For LFWM SS18 she presented both mens and women’s collections together, showing her staple designs – corset dresses, pinstripes – but in a new way. Men wore her corset dresses and when women wore them their fishnet tights were stuffed with rubbish. Both genders had graffitti scribbled over their skin to represent “the noughts which endlessly multiply money by 10 over and over. We only need a few to save the rainforest but billions disappear every day in global inflation”. Kent & Curwen do “reimagined British classics”. They’ve actually been around since 1926 doing classic classics, but took a break sometime in the 80s and relaunched in 2015. Bearing this in mind, their SS18 show is a painful affair, just really literally showing schoolboy blazers and even schoolboy caps alongside rugby sweaters, cricket whites and really ugly, uncomfortably obvious branded sweatshirts. If your fantasy is to look like a preteen boy from a posh school, this will be right up your street. Charles Jeffrey is a relatively recent addition to LFWM and has employed some really bonkers additions to his catwalk in the past, including naked performance artists and massive papier-mache wearable sculptures. Guess what, this time they’re back in the shape of dragons in Y fronts and huge tribal masks with little pink trainers and it’s somehow no surprise, looking at the credits, that the set design is by Gary Card, performances by Theo Adams Company and jewellery by Dominic Jones, those club kids of old.

But in amongst the theatricals these clothes have panache. Punks, saints and 18th century queens decorated by Dali graced the catwalk along with a very desirable blue jumpsuit decorated with gold naval frogging drawn on in a casually sinuous line as if Jeffery had commissioned Jean Cocteau. There were shades of early Vivienne Westwood and Galliano in this fancy dress parade that I, for one, would be happy to take part in. 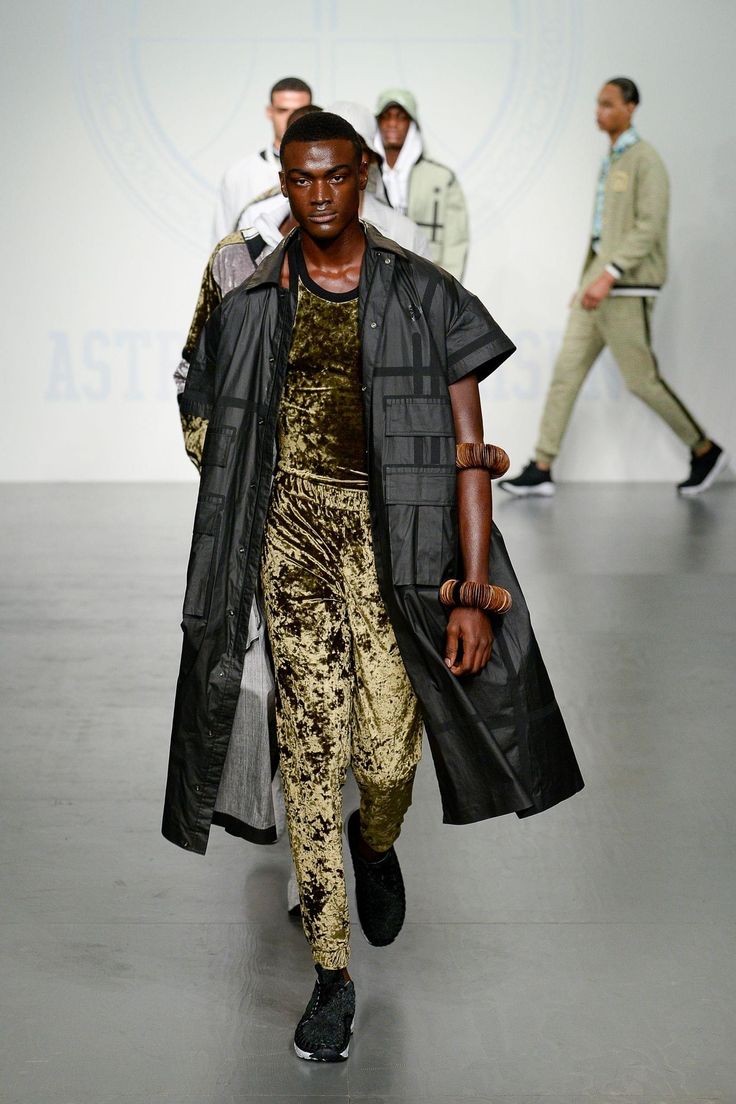 Astrid Anderson is well-known as the progenitor of sports luxe – that is, tracksuits in lovely fabrics. She plays with notions of masculinity and this LFWM SS18 she continues. Men proudly show off perfectly chiseled abs in crop tops, pastel blue silk flows prettily in palazzo pants in stripes or floral tracksuits. crushed velvet forms leggings and vests and belies peek coyly from under golden lace, yet shapes remain traditional to the sportswear aesthetic. Great stuff.

MAN is a joint venture between Topman and Fashion East. This MAN show includes some fierce femmes of both genders, displaying admirable diversity in terms of race and body shape, although all wear lashings of makeup, hair dye and high heels. Under the MAN umbrella this LFWM SS18 are Art School, Rottingdean Bazaar and Per Götesson, each with a separate style and interesting in their won right yet with a common theme that hangs it all together. You can see why they have been chosen to be showcased as possible stars of tomorrow.

Art School are a gender queer fashion collective, chiefly lead by Tom Barratt and Eden Loweth, but including many other collaborators. They celebrate the body and the idea of fantasy – so in their version, “gender neutral” isn’t a pair of unisex overalls but a scarlet silk dress that could be worn by either or all genders.

Rottingdean Bazaar are James Theseus Buck and Luke Brooks. They are experimental, showing clothes with, say, a hammer loosely taped on or, even more uncomfortably, a bent garden fork (real hammer, real garden fork). Garments are plated in pennies or appliquéd with full-sized pairs of jeans.

Per Götesson shows menswear that is interestingly constructed. This LFWM SS18 it was loose trousers with string vests, oversized romantic shirts and pink suits.

Christopher Ræburn leaned heavily on the athleisure this LFWM SS18, creating raincoats, capes and jackets from a waterproof looking fabric, like an upgraded rain poncho for tourists in colours of grey, black and white with bright pops of orange. Matching shorts in the crinkly fabric looked nothing but sweaty.

Layers of black or orange tulle for both men and women followed, edged in tape that read “Reduced, recycled, remade, Ræburn”. The edging was also used as a waistband for pants in what was surely a nod to Calvin Klein’s must have knickers of the 90s. Little mesh bucket hats completed the reference to the decade. Camo crept in unnecessarily but the colour palette, especially the grey and orange, really pulled the collection together – and props for the matching socks.

Very cool, very calm, Chalayan presented a muted palette of beige, grey, white, black and navy with baggy suits and kimono inspired jackets in cottons and linens. His trouser length was cropped or made to be cropped via adaptable straps holding them up. Shirts and jackets also came with a line of poppers which could be opened to give a kind of gaping, slashed effect to sleeves. Shorts, hoodies and sweatshirts also featured. It’s not as intellectual as some of his shows but will be welcome to fans.