Last womenswear fashion week, journalists were all a-twitter over the changes to tradition – the see now buy now experimentation, the gender-blurring clothes that saw men and women sharing the same catwalk, wearing versions of the same costume. London Fashion Week LFW Mens AW17 carried on the innovation with some designers still showing men and women together on the catwalk, and upped it with some striking performance art from Charles Jeffrey, adding in the usual novelty pieces from brands like Bobby Abely and giving us experimental knitting as armour in the eagerly awaited offering from JW Anderson.

London Mayor Sadiq Khan opened the LFW mens AW17 shows with a speech praising London’s diversity and welcoming the brands from many countries who had come to participate. Here are some of the highlights.

Charles Jeffrey showed under the MAN umbrella, an initiative between the excellent Fashion East and Topman to support and champion emerging menswear talent.

Charles Jeffrey runs a club night and says that is his primary field of research  – the “tribe of friends and creative collaborators – artists, performers, musicians, drag queens and poets” inspire his catwalk work. And it shows – for LFW mens AW17 nude, mud steaked men, bodypainting and battered paper mache costumes featured among a mixture of immaculately fitted sober, sixties influenced mod suits and more punk looking outfits. Tiny pinstriped skirts worn under a longline matching suit jacket were followed by sculpted flying jackets with an eighteenth century shape, and dandyish references were chased up by monkish looks. It all seems disparate but somehow fits together, and if there’s a hint of the fancy dress, it’s quite a desirable one.

Oversized knitwear with fluted sleeves and granny crochet in strong, traditional colours were the most striking pieces of a show from a designer who, as creative director of Spanish brand Loewe has become carefully watched. JW Anderson’s own label is wilder, featuring baggy trousers beneath those baggy jumpers and cardigans, surmounted by crocheted neckties and scarves. There was fringing, padding, patchwork and appliqué that resembled tile graffiti, and the designer said that “I wanted to make layers upon layers, as a sort of defence mechanism. The oversized element … it creates a slouchy protectiveness. It’s knitty, cosy, the idea of a familiar feeling … a motherly vibe.”

Astrid Anderson has always done a luxurious and quite pretty but wearable take on menswear, with her classic shapes and proportions offsetting the satins and velvets, and careful use of colour and prints that is original but not overpowering. She said that this is crucial for elevating everyday streetwear on the catwalk. “It only works if it is juxtaposed with something. My take has always been about softer things; feminine fabrics, like lace.”

This season LFW mens AW17 is no execption: an eighteenth century vibe with colours of warm gold, midnight blue cream and burgundy is accentuated by a fake fur trimmed gilet, and a velvet jumpsuit with brass studs and belt buckle manages to look extremely masculine despite its tactile fabric.

Bobby Abely also does sportswear, but without the finesse of Astrid Anderson. Billed as “witty” his work is more queasy, looking back to that early 2000s club kid desire to dress up babyishly, with shorts over tights, fake fur shorts in bright blue worn with a superhero print top, dinosaur prints, power ranger helmets and even a pair of baby reins with a teddy bear motif, the collection feels like fetish more than fashion.

Christopher Shannon has something to say about Brexit for LFW mens AW17 . His models walked the catwalk with shredded flags over their faces, including that of the European Union. The clothes themselves were resolutely streetwear: boxy, jackets in a denim jacket cut, trousers cut like slim jeans, leggings, and warm padded jackets. The brand paradies which he enjoys playing with were glum this season: instead of Timberland a sweater read “Tumbleweed”, and Boss International became “Loss International”. A t shirt read “CS – Constant Stress – I’m done.”

About his work, the designer said “I’m not in the mood to be a fantasist. All I have seen is builders and couriers, so the clothes I see are hoodies and trackies and worn-out neons. Everything is a staple … I’m interested in clothes and not drama. I wanted it to feel inclusive, but also a tiny bit aggressive, and a bit pissed off.”

Another brand that featured both genders on the catwalk together, Casely-Hayford gave us oversized suiting with subtle pattern and texture clashes along with the routine but nicely done sportswear, knitwear and classic trenches in solid colours and some interesting prints and the odd bout of distressing.

Margaret Howell’s offering is always desirable in a low key way, and always variations on the same clean cut, bookish aesthetics, so fans will get what they want with few surprises. That’s a good thing, by the way. This season came in neat neutral block colours, like grey, cream, black, brown and white, with mustard for the adventurous and a single mustard and grey striped vest for fun. Trousers are cropped at the ankle and box pleated and belted at the waist, worn with an unlined jacket or tucked in jumper and shirt. Classic macs, a nice jumper or two and the most ugly shorts I’ve ever seen worn with sandals or white brogues with socks complete the collection.

Hussein Chalayan’s womenswear is all about a gimmick, so with his menswear for AW17 I was expecting the addition of some X Ray specs or perhaps some socks that could fold themselves or something. But the collection was fairly devoid of trickery, referencing, according to the press release, Ancient Greece and its values being replaced by corporate forces. With oversized but slick suiting over primly buttoned-to-the-neck shirts and precise black ties, if I was having a stab at its meaning I would say, rather, “School boy is forced to grow up and don the corporate suit”.

Especially with the worried frowns on the models faces, I expected to see trailing shoelaces and perhaps a comedy teacher in a cape and mortarboard hat rushing after them shaking a fist, like a character from The Beano come to life.

Christopher Ræburn carefully considers a drab offering with utilitarian appeal. His fabrics are nylon and jersey, and his shapes head toward the sport casual or the hiking enthusiast with padded nylon and considered layering to the fore. Colours are grey marl, khaki black and navy with straps and webbing aplenty, and squares of yellow contrasted with grey do little to leaven the mood.  This serious and practical situation is underlined by the model apparently carrying a gas mask alongside the other camo-printed bags he is slung with. Again, women appeared on the catwalk alongside the men, but had to wear shapeless skirts. 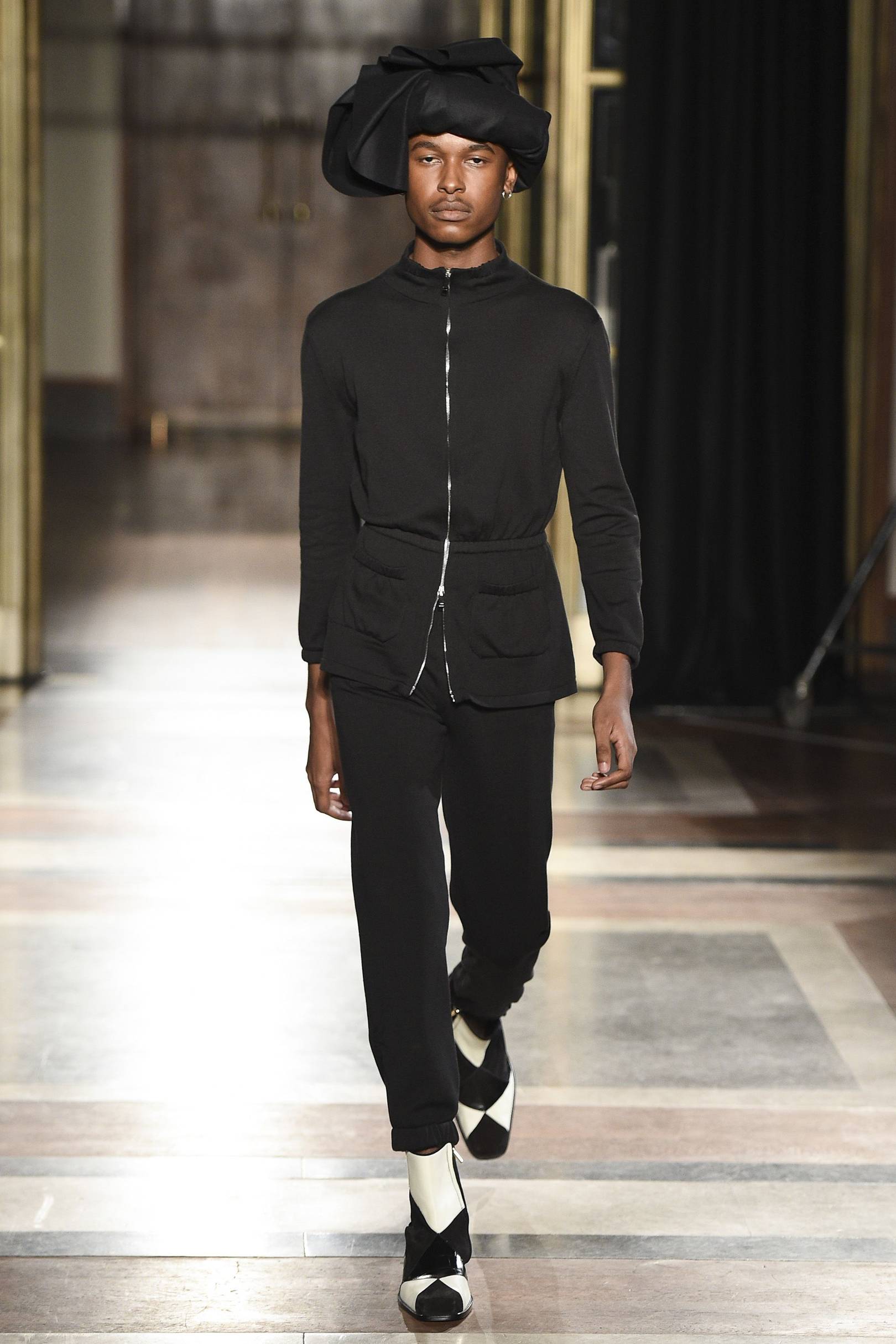 Grace Wales Bonner only graduated two years ago and has a strong political theme running through her collections, looking at how the black man is both represented and recognisable. This show featured womenswear too. Beautiful details tied the collection together, with varied headwear and an impeccable footwear collection an particular joy.

Seventies, Eighties and Nineties references all swarmed in, with leather trench coats and cream safari suits looking like the chicest of the Seventies, a shell suit trouser giving an Eighties streetwear vibe while sleeker black tops with slim trousers recalled a Nineties Prince.

A gorgeous, vibrant collection from the label for LFW mens AW17 in which men and women appeared on the catwalk, although they did not wear the same outfits, with women the only ones to wear dresses. However, men appeared in jumpers so oversized they could be minidresses, and were also put in body harnesses and trousers with charming ruffles along the outside of the leg. The colours and lustre of the collection gave it a huge appeal – dark blue sequins on matt black appeared as a zebra print motif for both dresses and sweatshirts, and the same design was woven in the same colours on trouser suits. There was a red version too.

Sportswear combined with Henry VIII’s ruffs, and bomber jackets, shawl collars and a loud print in rust, cream and blue on silk gave the eighties a twist.

Relatively new to LFW is Craig Green, showing since 2013. He has developed a strong aesthetic, and for LFW mens AW17 the designer, like many others, looked at oversized clothes, padding and cocooning. These men, who wore what seemed to be the ruffled sash of an imagined regiment, will not be getting cold.

Neatly quilted velvet looked like flak jackets, and oversized wool suits, bundled and tied, managed to look of the moment, but a foray into print produced too much of a jumbled effect.