Opera: Passion, Power and Politics is a splendid exhibition. I can’t call it anything less dramatic than that. The passion is well to the fore, the power and politics well represented. It’s large in scale, bold in execution with some big ideas. Conceived in close collaboration with the Royal Opera House it uses artefacts, documents, paintings and some absolutely massive screens and props to tell the one history of opera, using seven European cities and time zones spanning four hundred years in a dynamic display. And, fashionistas, there’s plenty of clothing and costumes to drool over.

You might enter though the V&A’s new Sackler Courtyard, a renovated part of the museum that was opened this summer. It leads to the new Sainsbury Gallery exhibition space, where Opera: Passion, Power and Politics is the inaugural exhibition. 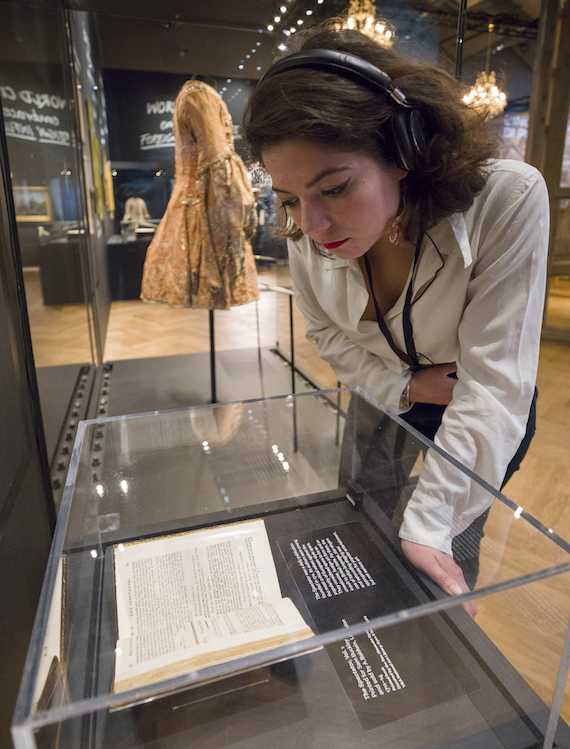 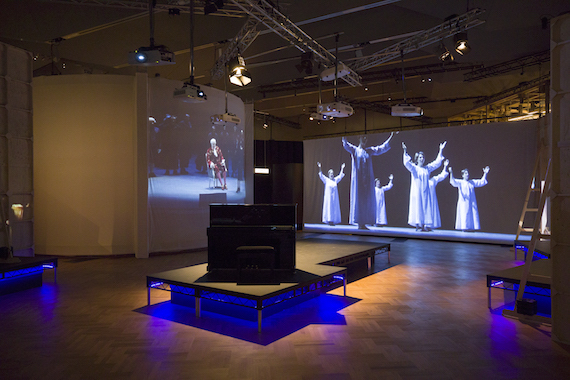 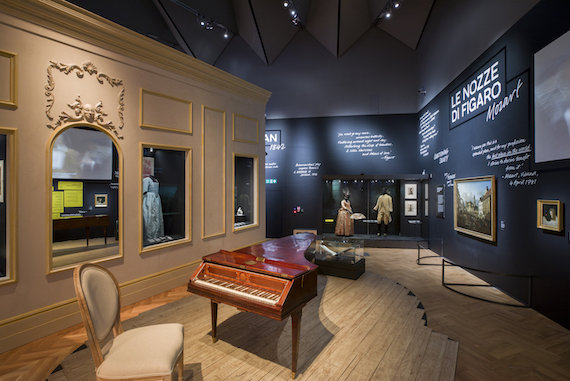 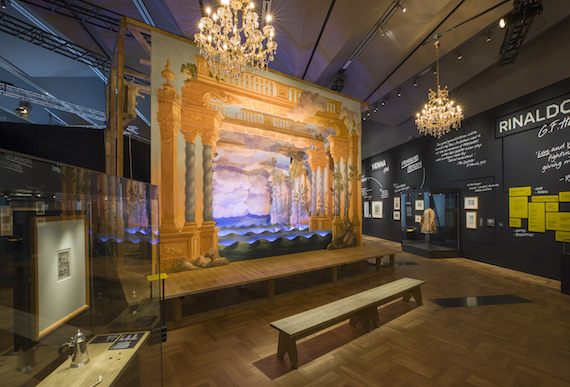 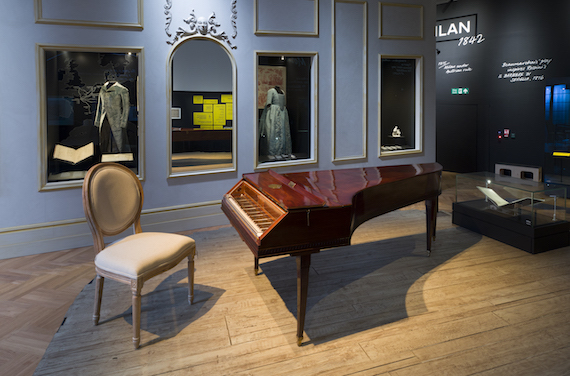 Opera: Passion, Power and Politics is entered is entered down an elegant new staircase, with black lacquered handrail and quite Deco in nature. Immediately you are handed a headset and headphones, which will auto-play as you approach each exhibit. They use this technology a lot at the V&A, I saw it at the exhibition and I know it was used for their blockbuster David Bowie one too. It makes sense as you can have high quality music for each display that doesn’t clash with the music in the adjacent one, like two one man bands on the same street.

But it does make for an eerie audience experience. The same way as you’re not supposed to have headphones when cycling as it cuts you off from the outside world, the headphones make each viewer very self contained, and if you happen to take them off you’ll find the gallery eerily silent, with just little shuffling noises, no conversation about the show.

It’s a shame, I like to have conversation, and I admit, I like to overhear other people’s conversation too. You can learn things, share a smile, mutually appreciate little details. Next step is probably virtual reality headsets (which they do have for one room at Tate’s current show, Modigliani) and next, staying at home and doing the gallery tour from there.

The show opens with 1642’s Venice in all its glory, over-the-top-ness and naughtiness. The general idea is that for some people, Venice was full time Carnivale. The opera chosen to represent this is Monteverdi’s L’incoronazioni di Poppea. One of the first displays you come across is of a dramatic costume of a performer in scarlet, with tall scarlet wig, platform shoes and skirts folded dramatically back to show her knickers. This is based on a charming engraving of a courtesan in similar attire, wearing chopines not platforms and lifting her skirt to show her bloomers.

Chopines are a kind of platform shoe, designed for practical reasons to lift a person out of the mud of the streets but elevated to entirely impractical heights back then, so tall you needed assistants to walk in the mud for you and hold your hand so you could balance. I don’t know why they didn’t just dress a peasant in a matching shade to your outfit and walk directly over them, or get them to carry you piggy back style or something.

The next opera is Handel’s Rinaldo, in London, 1711. A very beautiful reconstruction of the mechanical scenery is presented in a large scale. A character escapes over the sea, and rolling papier mache waves have been created, whilst a little model boat bobs across them and a cardboard mermaid attempts to lure the passengers overboard.

Next, we’re onto Vienna and Mozart’s Le nozze de Figaro, 1786. A case shows the velvet three-piece suit, complete with knee breeches and stockings the upper classes would have worn, which Mozart, although by no means endowed with that kind of money also adopted in order to single himself out from the servant class. This particular one is fascinating – pale blue velvet with what resembles a tiny leopard print. There is another suit at the end of the room as well as a ladies outfit. Contemporary reports show how the outfits worn on stage actually influenced fashion at the time – bodices described as a la Figaro, for example.

Salome – the wild woman of the 20th century

Our next place and time is Milan and Verdi’s Nabucco, 1842. Then Paris, with Wagner’s Tannhauser, 1861, and onto Dresden, and Strauss’s Salome, 1905. Salome is fascinating, and the display shows how Salome Fever gripped the world for a time after Oscar Wilde wrote his controversial play of the same name in 1891.

The exhibition links Salome – the story of a wild, but persuasive teenage girl, fully in control of her sexuality – in with feminism. There are some wonderful Salome artefacts here: drawings by Aubrey Beardsley and then a seven minute long 1923 film with costumes based on his drawings, which has been described as the first art house film, bizarre and dreamlike as it is.

The characters wear some wonderful outfits – a white bobbed wig for Salome herself, along with a clinging mini dress so tiny it could have been designed by Azzedine Alaia in the 1980s. There are also posters of the famed Louie Fuller and Maud Allen in the title roles.

The Politics of Opera

After that, the exhibition goes to St Petersburg and Shostakovich’s avant-garde Lady Macbeth of Mtsensk, 1934, with a room set of the composer at work and posters of Soviet idealism.

Opera: Passion, Power and Politics is on until 25th February 2018 and is highly recommended.