Update: I interviewed Imogen Hermes Gowar two years ago now! I knew that in the usual terms I was a bit ahead of myself, but I really wanted to get her thoughts about the book whilst they were still fresh. The Mermaid and Mrs Hancock was subject of an exciting bidding war between publishers and has been hotly tipped by Vogue, The Guardian, and many other sources as being THE book for 2018. You can get it yourself from the 25th January here (or most other UK book stores). HUGE congratulations to Imogen on her success.

Imogen Hermes Gowar is an extraordinary writer whose work I have admired for some time. Her novel, The Mermaid and Mrs Hancock, has just been shortlisted for the prestigious Mslexia First Novel Award, so what better moment to quiz her about the vagaries (and vulgarities) of the eighteenth century when it is set, and what she has learned about the lives of women and the fashions of the time?

Genevieve Jones: Your book is set in the eighteenth century. What drew you to this period?

Imogen Hermes Gowar: I’d been reading about the 1780s for years before it occurred to me to write anything set during that time, and when I did it happened by accident. My original idea came about when I was looking at a mummified mermaid in the British Museum, and thought, imagine if a bloke thought he was getting one of these, and a real live mermaid turned up. I nursed the idea for quite a while, and could have set it at any point from the Restoration up to the end of the Regency period, but when I finally came to writing it, I felt so comfortable with the 1780s. 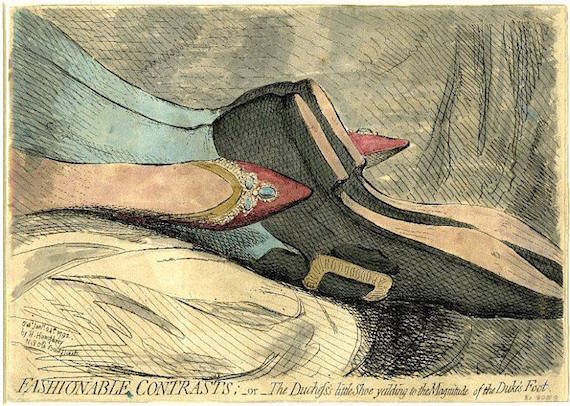 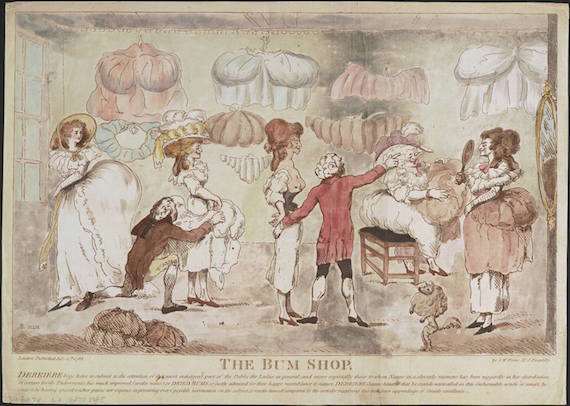 What I liked most – as a reader – was the humour. The Georgians had comedy deep down in their psyche, and were ready to laugh at nearly everything with an irreverence the Victorians absolutely forgot. That, and it’s always felt to me a very absurd, carnivalesque time: everything is bigger and weirder and lewder than you could invent yourself. My main problem in writing and researching was that every time I thought I’d jumped the shark, in terms of outrageous fictional excess, I’d read about somebody who went one step further. 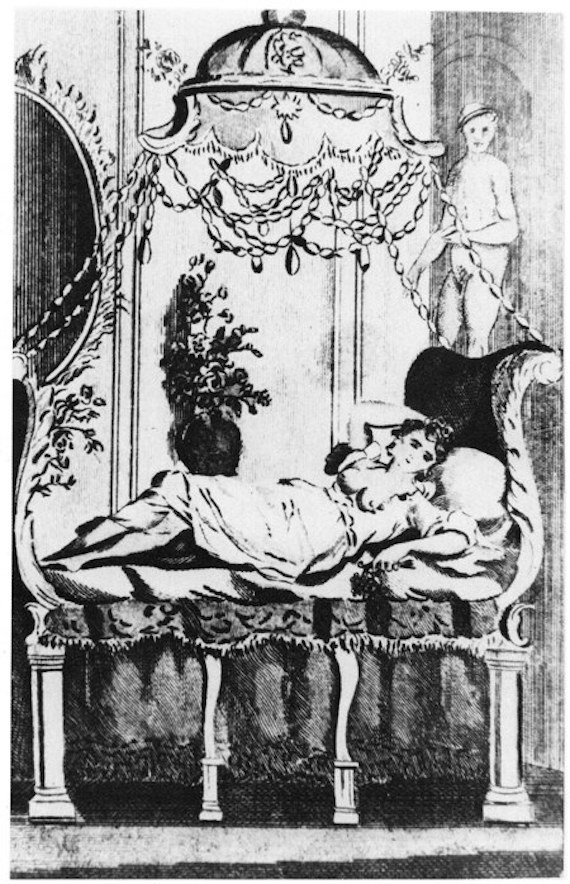 A contemporary engraving of the Celestial Bed.

My great inspiration was Charlotte Hayes, one of the most powerful madams of her generation, who used to throw naked dances where the orchestra faced the wall and the guests wore fig-leaves on their faces. And Dr James Graham and his Celestial Bed, which had rock-crystal pillars, and perfumed smoke billowing, and lovely draped girls to dance around it. It was supposed to have electricity zapped through it (this might have been the girls shaking the bed), and if you had sex in it you were bound to conceive. The Prince of Wales and Maria Fitzherbert tried it at least once. 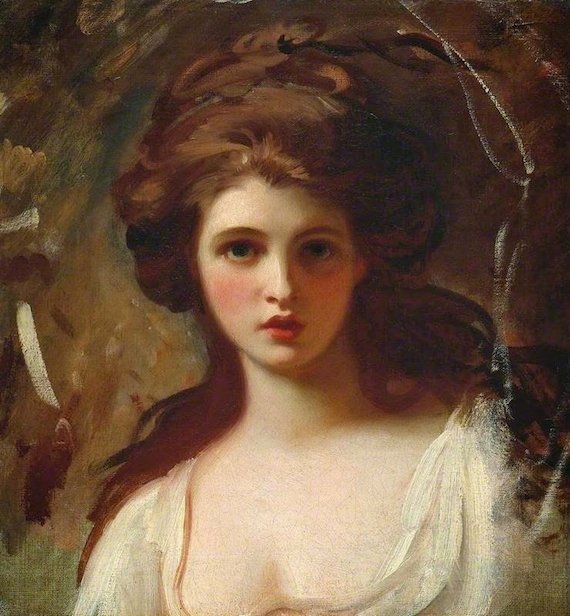 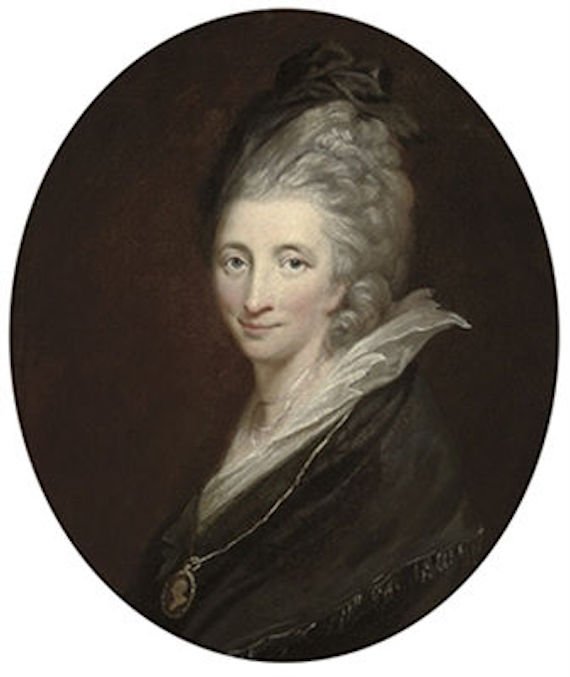 “The Comic Muse, by Goles” (1790)
This depicts the actress Dorothy Jordan, and as Imogen says, “is pretty emblematic of her physical dynamism onstage, plus her hair because no starlet was complete without amazing hair.”

I had also been interested in 18th-century women for a long time. There were lots of extraordinary women – bluestockings like Hester Thrale; actresses like Dorothea Jordan; courtesans like Emma Hamilton – who, in the absence of feminism, had to find their own way up. I have always been interested in how women achieve autonomy in societies that don’t really allow them that, and to be honest in the 18th century a lot of the time that might involved having sex with men you weren’t married to. I wanted, partly, to explore the many reasons a woman might get to that point. Did it feel like a dramatic step to them? Was it always beneficial? What was the stigma attached to it? 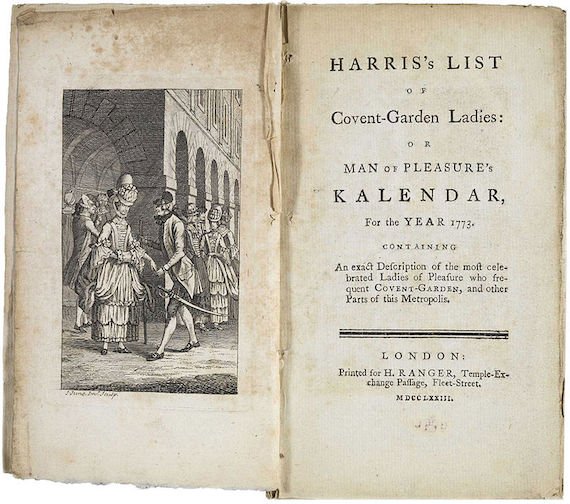 Some of the women in my book are sex workers, and some are not: mostly I was interested in the ways women found to achieve power and security in a world where they had few legal rights or social support. What I found is that most smart women made pragmatic choices for their own survival, with little notion of female community. When they were secure, they rarely took steps to change things for other women, they just thanked their stars that they had beaten the system. Charlotte Hayes, the madam, argued that by acquiring girls she was giving them a far better quality of life than they had on the streets: she fed them, dressed them, taught them to read, and introduced them into a better social circle. The fact that in exchange they had to have sex with strangers didn’t detract from her benevolence, in her opinion.

GJ: And what is it about mermaids that you like?

Imogen Hermes Gowar: In fact my first ever ‘novel’ (written when I was 8) was about a mermaid. I sent it to Walker Books and they responded with my first ever rejection letter, describing it as ‘very sweet’, which I was far more offended by than the rejection itself. I’ve always liked wild, open spaces and at that age my experience of the sea was mostly various bits of the North Sea. I loved how vast and powerful it was. When the wind was freezing and the pebbles were all turning over and the waves were towering, I wished I could be a mermaid so I could be in the midst of it all.

The mermaids in my novel are definitely rooted in that memory: no winsome maidens, more like big powerful emotional presences.

GJ: How much research did you find yourself doing on the era? Did you feel that you had to be historically accurate all the time or did you change anything to fit the plot?

Imogen Hermes Gowar: I did a huge amount of research. Because there is an element of magic in my novel, I wanted every other aspect to be faultless. I spent about a year in the British Library, but a lot of my research has been by-the-by. Some friends of mine got married at Chiswick House and I am sorry to say that I made several notes on how the string quartet sounded playing in a little marble atrium. That kind of thing is not an experience you can access all that easily nowadays.

I walked about London quite obsessively, on missions to look at particular buildings and streets, and went to all the tiny museums (Dr Johnson’s House is lovely). I just tried to absorb the textures of the era as best I could from what still survives. It was important to me that I didn’t spout a lot of book-learning, but created a world my readers could settle into. Still, I wouldn’t say that what I’ve written is a ‘true’ representation of Georgian London, because nobody can achieve that. It’s my reading of it, with all of my favourite bits, and I hope I’ve reflected the character of the 1780s in a faithful way.

Read Part Two of our Imogen Hermes Gowar interview in which we learn about research into historical fashions and also Learned Pigs.

Imogen’s Twitter handles are @girlhermes and @covgardenladies . You can read a tantalising extract of Imogen’s novel, The Mermaid and Mrs Hancock, here.

And you can buy it here!

A room in Dr Johnson’s house.