The new Design Museum’s opening exhibition Fear and Love – Reactions to a Complex World  is ambitious and dramatic yet accessible, and I would definitely recommend a visit, if only to say that you were there and one of the first to set foot in a museum that is surely going to be an enduring institution still being visited in 100 years time.

Fear and Love At The Design Museum

Firstly, a word about the museum itself. Newly relocated from its former site in Shad Thames, the museum has now tripled in size and is now housed in a Grade Two listed Modernist building, which has had its insides removed leaving the shell intact, and replaced (by John Pawson architects) with a neatly dropped in wood and marble box which seems to function entirely free of the walls and original soaring, pavilion like ceiling. It is a neat solution and leaves a roomy feel with a large atrium to welcome visitors and plenty of seating space, ingeniously built into the stairs along with two gift shops, a cafe, offices and learning spaces.

All of this, much like the the new Tate extension, leaves space for only two relatively small galleries, but we all know by now that the main point of any gallery is its eating and shopping opportunities, with perhaps a quick visit to see some art if there’s time. Indeed, the day I visited on its grand press opening, there were a striking amount of press people with clear plastic Design Museum carrier bags doing a little early Christmas shopping in between photo calls.

That said, the exhibitions themselves belie this. The museum plans on doing two simultaneous temporary exhibitions a year alongside its permanent exhibition, Designer Maker User. Designer Maker User is a free baseline exhibition aimed at school parties and those with little design knowledge, and a quick skim of it reveals panels about fitted kitchens and how they changed housewives’ lives, and how streamlining tube trains makes them run more efficiently.

The concurrent exhibition, in this case Fear and Love – Reactions to a Complex World is meant to be a more in-depth and focussed look at design.

Fear and Love – Reactions to a Complex World 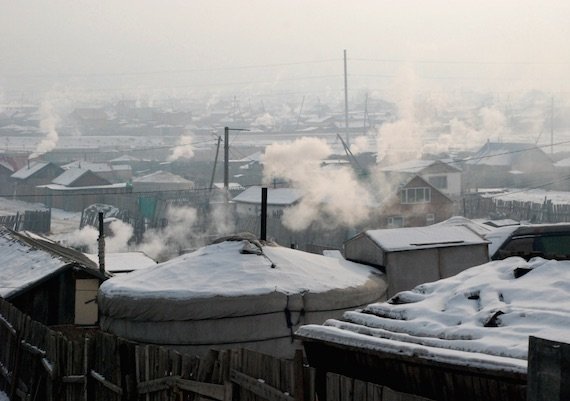 Fear and Love – Reactions to a Complex World has contributions by eleven designs from various disciplines. The exhibition design is bold, with a large amount of floor space given over to each designer and their projects presented dynamically, for example with Rural Urban Framework’s full sized felt clad pod, City of Nomads designed as a community space for nomadic Mongolians. It leads to (and cleverly baffles the sound for) Andre Jaques’s interesting twenty minute film Intimate Strangers about the Grindr app and how it, too, promotes community.

To make the film less static it is presented on several screens of different shapes and dimensions, with seating. There is a full sized corrugated plastic shack to house Arquitectura Expandida’s project Potocinema in which school children were given film cameras to present their thoughts about the fear and love topic, and a room setting presents the design collective OMA’s ideas about Brexit.

A long table runs through the Fear and Love gallery, showing computer assisted illustrations entitled Staples, so realistic they look like photographs which Kenya Hara has commissioned to show his ideas about how food staples shape the world. A noisy looking screen helps display Metahaven’s multimedia installation A Love Letter to Sea Shepherd, and a literally noisy robot obscures most conversation in this area. Bolted to the floor and held behind glass, its lunges and swoops render the massive machine quite scary as you realise Madeline Gannon’s Mimus  concept is of an industrial robot reprogrammed to respond as a animal, which can “Wake up” in the morning and trundle over to the nearest person, seeking a response.

What if your reaction to it unintentionally makes it angry? This thing is clearly powerful. I’m glad it is behind glass. It is uncannily similar to the mechanised T Rex in the Natural History Museum, which delights in picking out specific children in the audience and reacting to their movements to their fascination and fear. However, as far as I know that is operated by a clever hidden human puppeteer with a remote control, and doesn’t have a robotised “mind” of its own. 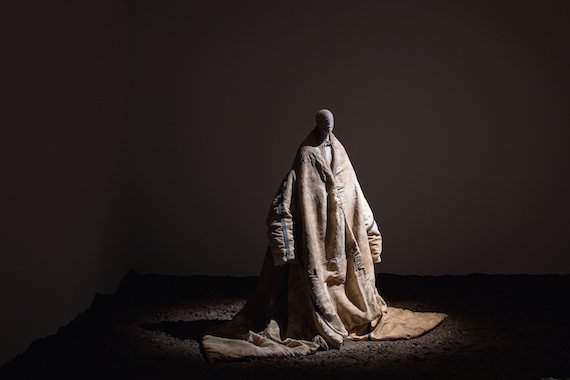 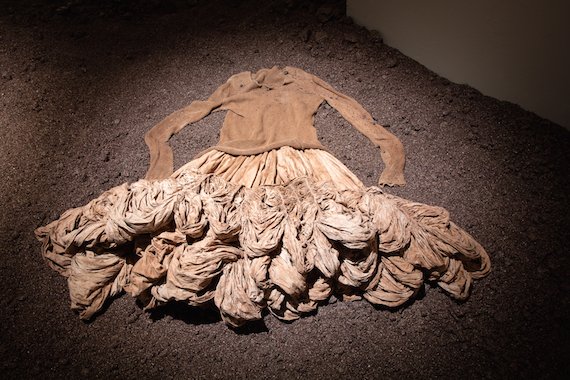 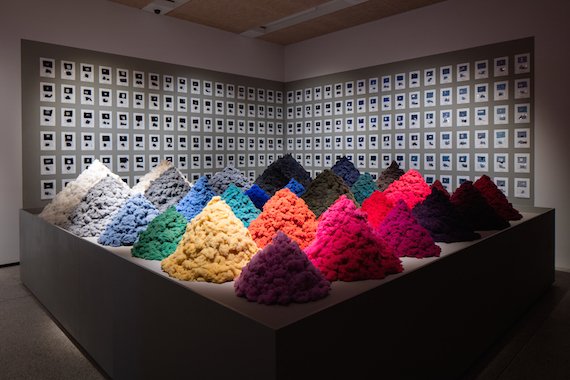 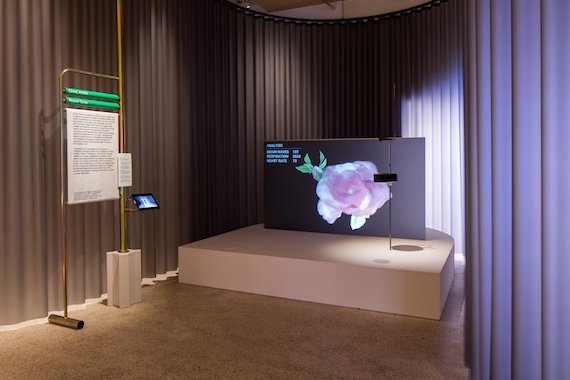 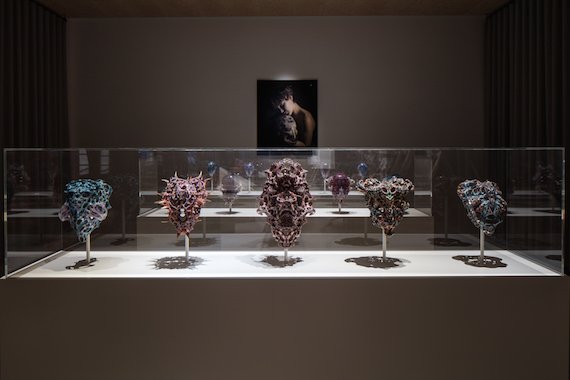 Of the most interest to fashion fans will be the exhibits by Christien Meindertsma, Ma Ke, Hussein Chalayan and Neri Oxman.

Christien Meindertsma has created a visually beautiful exhibition for the Fear and Love exhibition about textile recycling. What initially resemble Anish Kapoor style towers of pigment turns out to be piles of textile fibres in different colours. The work is about an under-explored area of textile manufacturing – the fact that when we put any fabric into a recycling bin, manufacturers are unable to make best use of it because the technology isn’t available to sort different colours and types of fibres in order to match like with like. Currently recycled fabric is made into mover’s blankets or carpet underlays, the type of thing where all the fibres are just mashed together in one jumble.

Meindertsma is interested in the solution, a much more sensitive sorting process where machines can tell if a jumper is made from wool or nylon, so your favourite worn out blue cashmere jumper won’t go to waste and can now, alongside several other blue cashmere garments, be made into a new one. In the process, Meindertsma discovered that the machines sometimes became confused as to the fibre composition of a garment, and intriguingly, it turned out that this was because quite a lot of clothes are mislabelled – it may say 100% lambswool on the label but in fact contain only 80% wool and 20% nylon. The labels and analysis are displayed on the wall behind the piles of fibre, and it’s clear that some big name companies are party to this deception.

Ma Ke offers a beautiful display in Fear and Love. Formerly one of the top high fashion designers in China, she turned away from the commercial whirlwind of high fashion collections and established a design studio and social enterprise called Wuyong, which means useless. Wuyong still produces clothes, but at a pace that ensures each stage of the process is invested with care an meaning, from planting the seed of the plant that will grow to produce the fibre, to the spinning and weaving of the thread which is done very slowly by hand on old wooden looms, the process of which is hypnotic and can be followed on an accompanying film. The garments are dyed with earth pigments, giving a subtle an mellow hue, and the shapes are reminiscent of traditional Chinese garments whilst also having a pleasing cocoon-like effect. They are displayed laid on a bed of earth and individually spot lit.

Hussein Chalayan’s idea, Room Tone, is one of the most disappointing of the Fear and Love exhibits. For his SS17 catwalk show he had his models wear a belt and sunglasses that measured their heart rate and respiration, which together indicate stress. Models were asked to consciously control their stress levels which were visualised on an accompanying screen by the metric of a rose curling up tightly when the model was more stressed and opening gently as they relaxed. The information was fed back to the watching audience.

The display also contains short films of other members of the public attempting to work the technology. It’s a concept which I find irritating, not least because there is already a wearable which is marketed to help people relax in a similar fashion, although surely having a bracelet telling me I’m failing to relax hard enough is surely going to be less than restful experience. Personally, I think a beltful of valium would be more helpful.

The beauty of death

Neri Oxman, meanwhile, an artist who has created masks for Bjork, contributes an eerily beautiful display in Fear and Love. Entitled Vespers the 3D printed sculptures look as beautiful and highly polished as blown glass, but the flecks of colour inside them are encapsulated bacteria from someone’s dying breath. These are fifteen death masks, presented in three series of five. The first subsection, called Past, all spiky projections and intricate hollows, is meant to be a portrait of the deceased personality, much like the more traditional mask. In its nuances of colour it emulates traditional crafts.

The second sub-series, Present, explores the transition between life and death and are more curved and domelike, strangely resembling a skull that has been turned into a beautiful, multicoloured jellyfish. The third series, naturally, is Future. These are the smallest and simplest, being nearly colourless but for the living micro-organisms which are implanted within.

As with most exhibitions, Fear and Love is best visited on a quiet day to be able to fully absorb the display, and it is worth building in time and having the patience to watch the many videos which really do enhance the experience. The ideas may be disparate, as the concept of design can be spotted in everything around us and the title Fear and Love can be interpreted in so many different ways, but the end result hangs together beautifully.