“Some say we should fix this world first. But learning to survive on Mars might help us to save Earth.” These are the words which greet you on entering the Design Museum’s “Moving to Mars” exhibition. It reads like a pre-emptive apology for all that follows. Is the idea of going into space just a little boy’s excited dream? Is it a dream which should be gifted millions of dollars/pounds/roubles to experiment with making reality?

The sober truth is that if a few multi-millionaires had the choice to blast off to Mars right now they undoubtedly would, and leave this whole sorry planet, its deadly epidemics and spoiled atmosphere behind to live in a pod on the red planet.

The Scope of the Exhibition

The exhibition has something for most people who have an interest in the subject. It also adds a little cynicism and philosophising.

At the moment, it’s impossible for humans to get there. The exhibition shows the robotic vehicles which are to be sent there. It has a fascinating, large, slightly wrap around virtual reality reconstitution of the surface of Mars. There are artworks based on the concept, from young people and professional artists. Then sections on the design of space clothing, and outer space design.

The Devil Girl From Mars – Moving to Mars 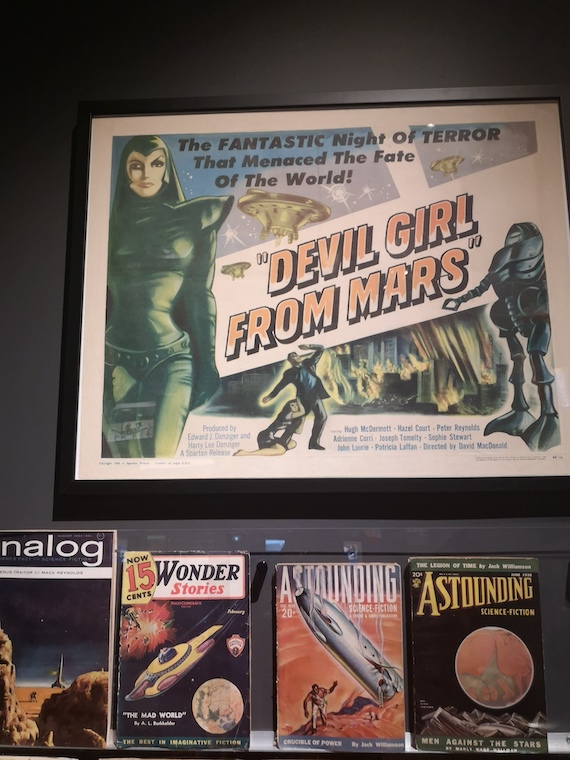 Moving to Mars. Sci Fi Comics and film posters thinking about what we might find there. Image Genevieve Jones.

The idea of moving to Mars, or Saturn, or any planet that would have us, first gained traction in the 1950s. A great deal of money was spent on the first step, reaching the moon. It sparked the popular imagination as people wondered what might greet us there.

Here are many artefacts and histories of scientists and designers trying to work out just how the human body could withstand the rigours of the journey.

They realised that the space suit would need many layers, and different aspects according to whether the wearer was inside or outside the aircraft. One of these was an artificial cooling system. Tubes could be sewn to a fabric overall and either cold air or liquid forced through – much like fridges work. The result is definitely interesting looking. A little cumbersome, certainly, but cool. Much later attempts use sports fabric technology to regulate temperature and wick away sweat.

Designers also realised that under low gravity, muscles atrophy. Even exercising on machines can’t counteract it, so bodysuits which stimulate the muscles using electrical impulses have been developed. These inventions are extremely useful on earth for older people whose muscles are diminishing.

The outer space suits themselves, although developed by different countries under conditions of secrecy have a lot in common. They use lacing systems and clamps to attach different parts together. Close up, they look rather gothic. Some, in khaki, look rather army like. The ones in white are more traditionally what we’d think of for a space suit. The colour doesn’t actually matter. Some are orange, some black. 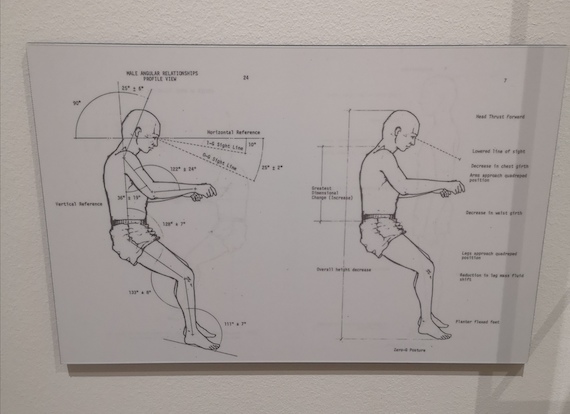 Moving to Mars. Working out an ergonomic sitting position for the controllers of the spacecraft. Image Genevieve Jones. 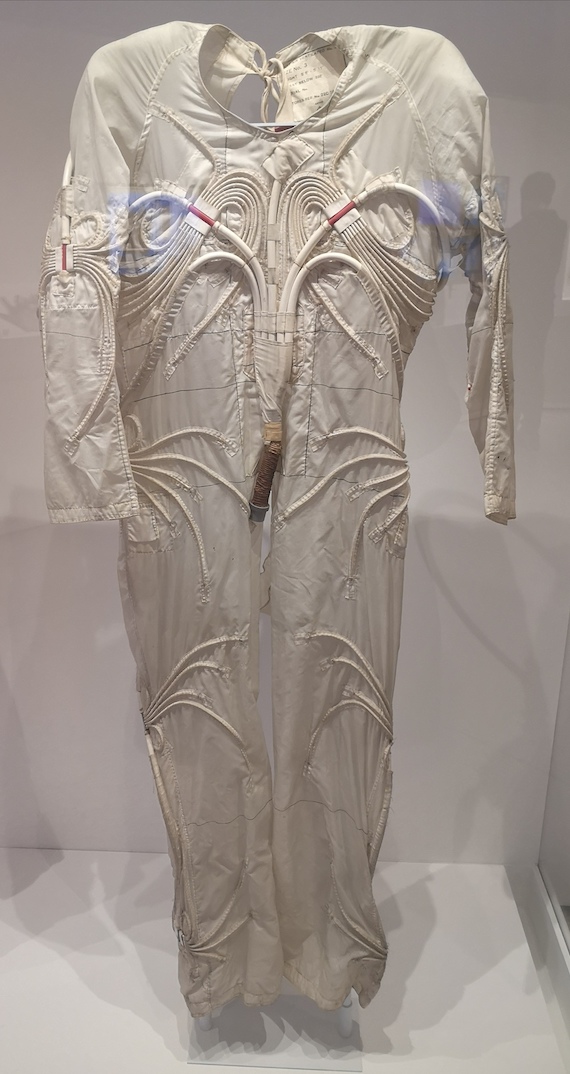 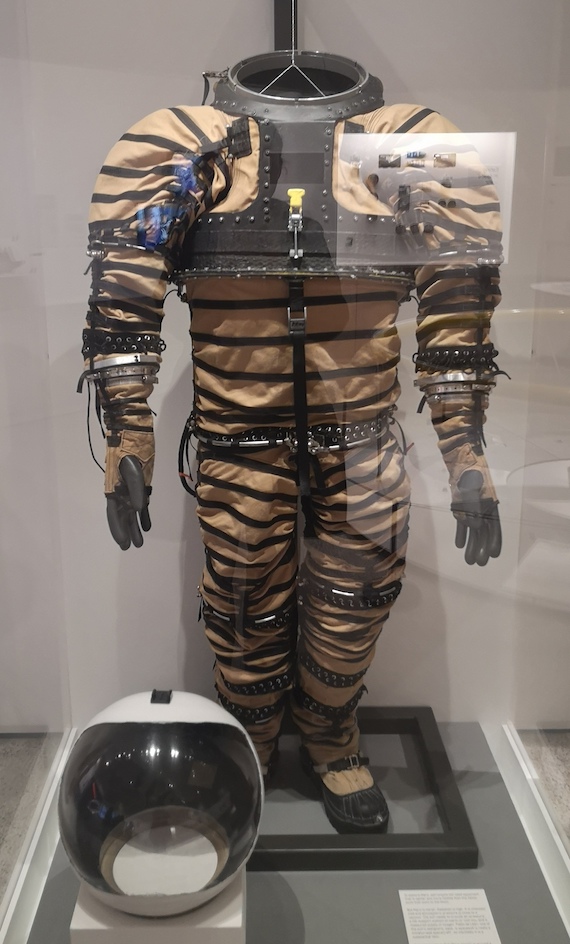 Moving to Mars. You can see how the different parts of the suit detach. Image Genevieve Jones. 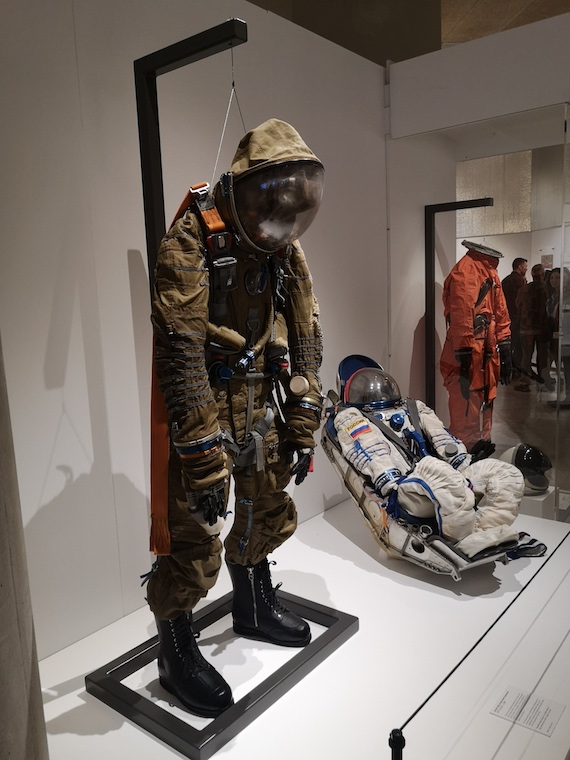 The mental and emotional cost of the journey

It’s hard to travel though space for years and be cut off not only from regular habits and friends and family but foods and even familiar smells. Artists worked on concepts like gloves which contained favourite smells which could be customised to each astronaut. 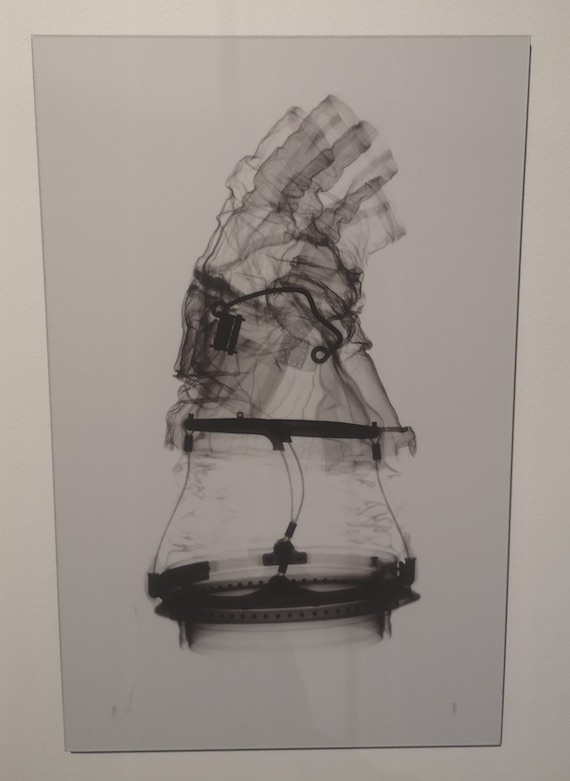 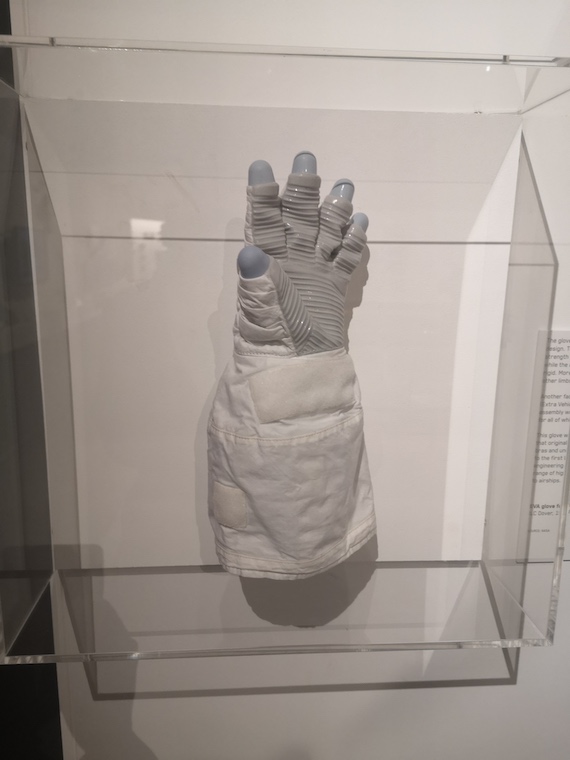 Moving to Mars – When we get there

When we get there, what will we eat, wear, or sit on? A lot of these questions reflect growing concerns we presently have with our own planet. What is lightweight, and has an environmental low impact? 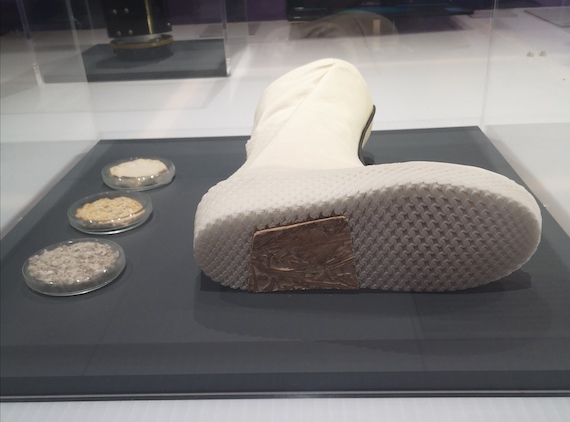 Moving to Mars. This boot is grown from mycelium, the root system of mushrooms. It is a material that is being explored presently for its ecological credentials. Image Genevieve Jones. 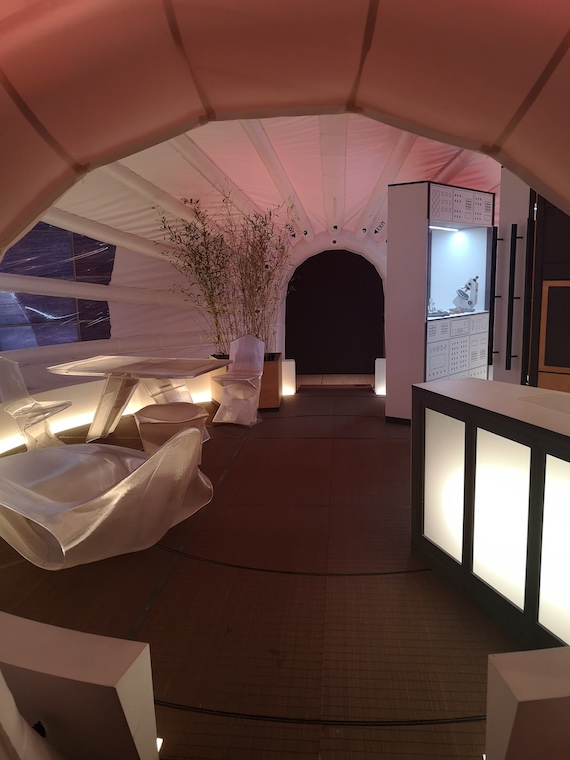 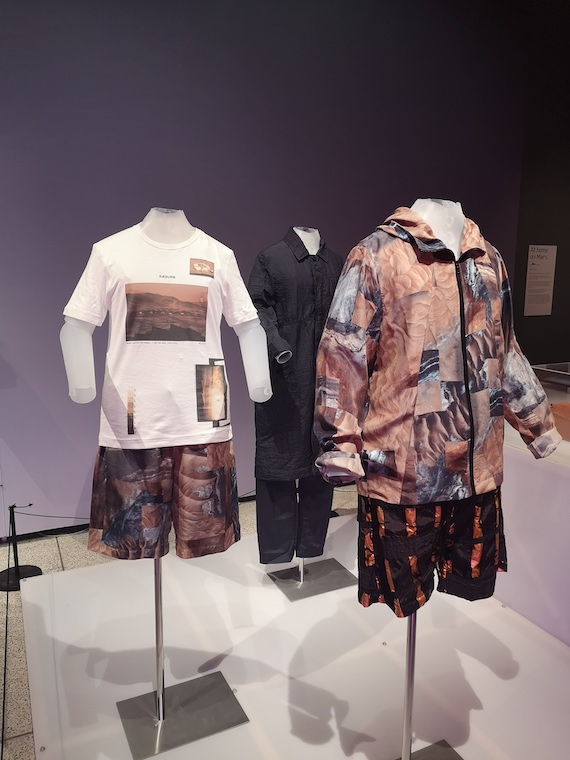 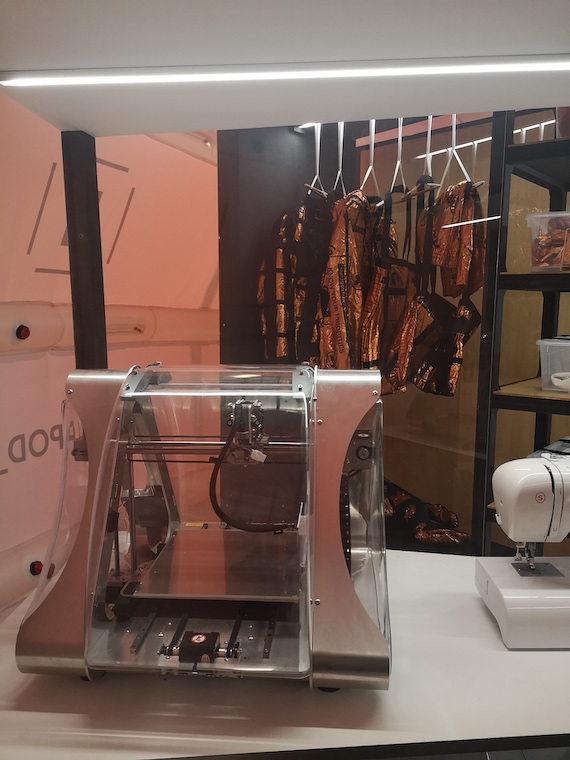 3D printer, sewing machine, and clothes made from your parachute in Moving to Mars. Image Genevieve Jones.

The exhibition suggests that on arrival in Mars, a self contained pod could be erected to live in. A 3D printer would be able to print out the furniture you need. A humble sewing machine would be needed to reuse your parachute to make clothes. The fashion designer Christopher Raeburn has been using this as the basis for his range for years – reusing fabric from other applications – and here he presents some examples of what could be made.

Of course, this is a bold move because once you’ve used your landing gear there is no chance to leave. Also, you’d have to trust you are good at sewing because this is your one chance – you could be forced to wear wonky shorts for the rest of your life. It was a bit incongruous seeing such a chunky, non futuristic looking sewing machine there. In real life there are smaller, lighter ones – a simple needle and thread would doubtless do the trick.

Other equipment for self sufficiency would include hydroponic systems for growing food under lights without soil. This recalls Matt Damon in “The Martian”, who worked out that he could grow and live off potatoes fertilised by his own poo when he tried out living on the red planet. And if that’s not an enticing prospect for this enterprise, I don’t know what is.

The First Book of Fashion

Review of Tim Walker at the V&A