Bright, bold, brilliant, and strange – knowing Natalia Goncharova must have been quite an experience. She was feted in her lifetime as “The Leader of the Futurists”. I don’t have to mention that, as a woman in the very early 20thcentury, to be given the title of the leader of anything, never mind an art movement, was quite something.

The exhibition of Natalia Goncharova at the Tate shows how prolific and multi-talented this aristocratic Russian artist was. She was a painter, printmaker, illustrator and fashion designer as well as designing costumes for the Ballet Russe.

The show is divided into ten sections: The Countryside, Moscow, 1913 Exhibition, Fashion, War, Art and Religion, Artist Books and Prints, Modernism, Goncharova in Paris and Theatre. They cover her upbringing and early life, along with her output and influences. 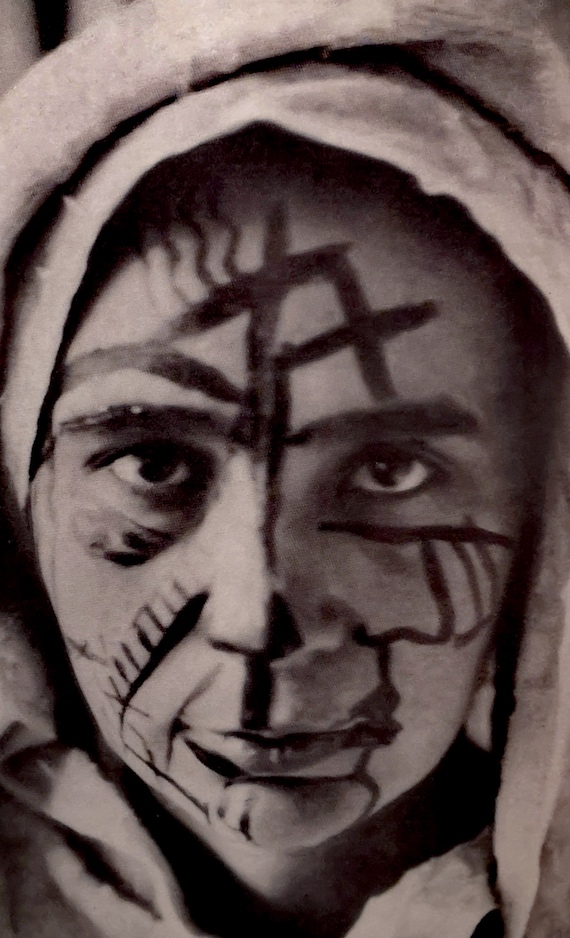 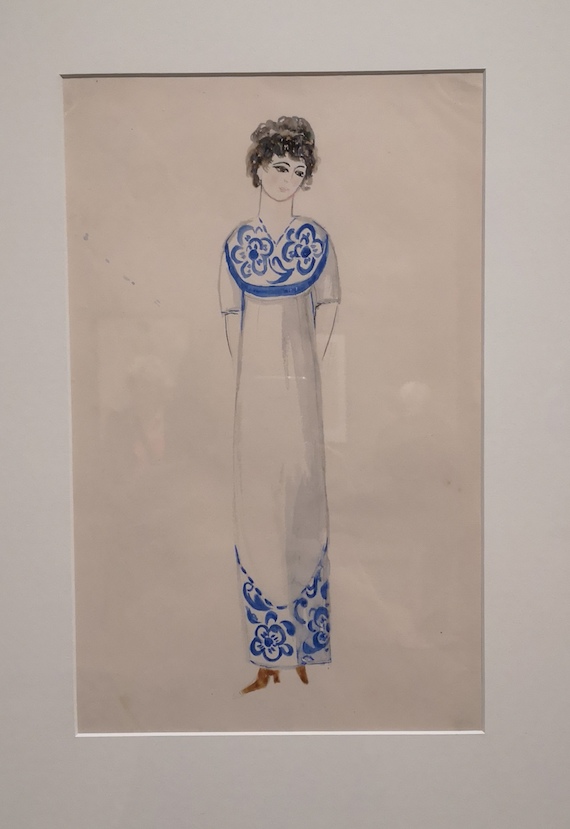 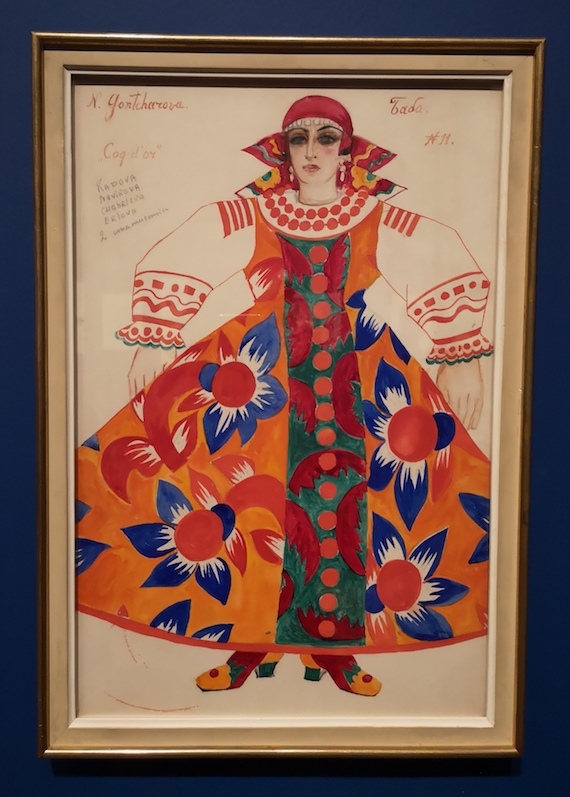 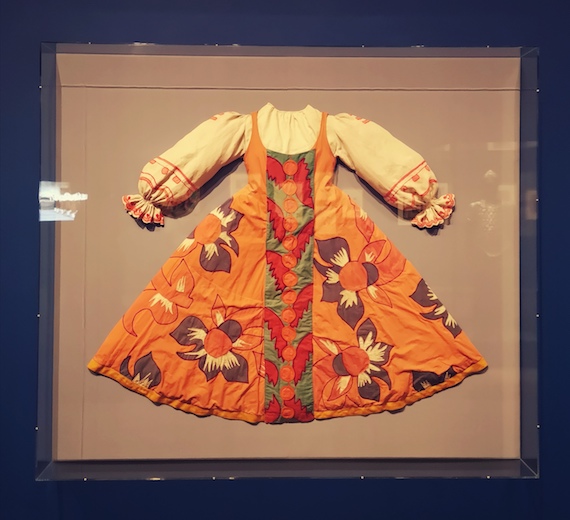 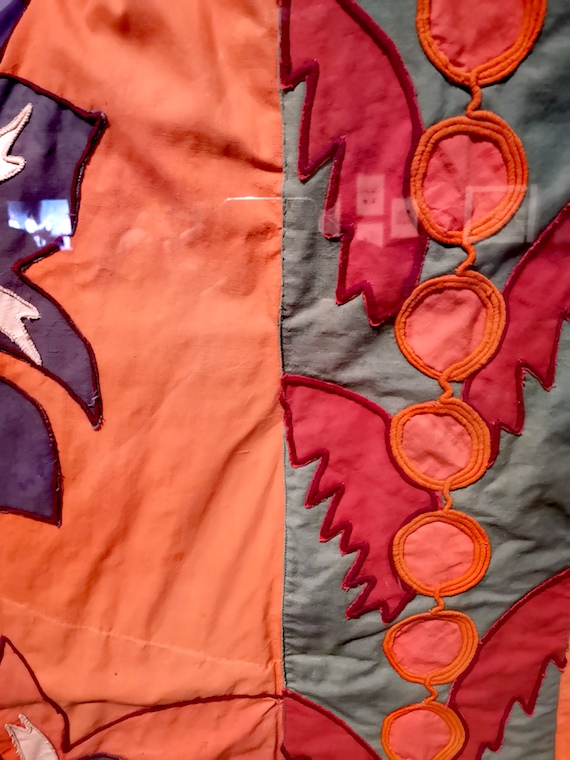 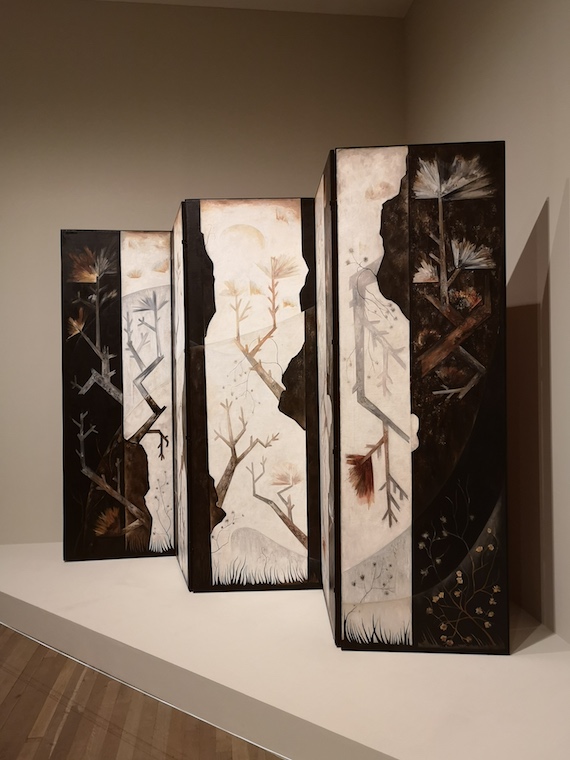 Natalia Goncharova was born to an aristocratic family who had made their money in textiles. By the time she was born, they had little of their ancestral fortune left. However, they still had their country estates, which is where Goncharova was born and lived until she was eleven.

Her family collected traditional Russian arts and crafts, including textiles. The colours and patterns of these works by mostly unknown folk artists had a huge effect on her, as did the clothes of the peasants who worked her family’s lands.

Goncharova sometimes adopted those clothes as well as out of date, period versions of them for photographs and self-portraits as well as a sort of shocking self-promotion on the sophisticated metropolitan streets of Moscow.

In this way, she was very like Frida Kahlo who knowingly used traditional costume to forge her image and identity. She is also like Kahlo in finding inspiration in regional folk art. Certainly, the colours and motifs of traditional embroideries permeate her work.

The Perfect Expression of Influences

But Natalia Goncharova was like a sponge. She soaked up and accurately reproduced many styles with great skill. After moving to Moscow at the age of eleven, she was able to see the newest works of European artists including Pablo Picasso, Paul Cézanne, Paul Gaugin and André Derain. In fact, she and her lifelong partner Mikhail Larionov were included in important collections alongside them.

In 1913, a retrospective of over 800 works by Goncharova opened in Moscow. She was only 32. It’s a huge show for an artist of any age. Her art was so diverse that the term “Everythingism” was coined to cover it. It included textile and fashion designs. Goncharova sold several works and received many commissions and reviews. The catalogue for the show went through three editions. It was a big deal.

But even before that Natalia Goncharova was famous, not least for her self presentation. According to the Tate, “This included parading in the street with her face painted and wearing extravagant outfits.” She set trends among bohemian society, and on the strength of this was commissioned by Nadezha Lamanova in 1913 to design some outfits for her fashion house.

Goncharova concentrated on surface design for this, with designs for needlework and textiles. Her design sketches for these, included in the exhibition, are surprisingly pallid but must have been striking in real life.

Natalia Goncharova and the Ballet Russe

Far more vivid are the costumes produced the following year, 1914, for the Ballet Russe. The costumes at the Tate are from a 1937 production of “Le Coq d’Or”, but following the original designs. Six are on display here, along with the original sketches. They are in the last room so provide a fantastic finale.

Amazingly, colour footage of the 1937 ballet has also been captured and digitally restored. It is filmed from the side because the producers of the ballet wouldn’t allow the great ugly camera to be front and centre, obscuring the view. However, it does give it a dynamic quality.

The point of the Ballet Russe was, of course, to exoticise the mysterious Orient so Goncharova’s designs are a joyous exaggeration of Russian folk costumes. The result is beautiful and, along with the choreography and dancing, very compelling. The designs and the connection to the Ballet Russe brought Goncharova international fame.

The Ballet That Never Was

She also worked on costume design and backdrops for other productions. Igor Stravinsky was a frequent collaborator. In fact, a piece they both worked on with the choreographer Léonide Massine, called “Liturgy”, became famous though it was never realised. The participants were such big names that Goncharova released a book of prints of the designs for it they were gobbled up without anyone ever even needing to see the ballet.

In 1915 Goncharova left Russia to tour with the Ballet Russe. They went to Italy, Switzerland and Spain. But due to the Russian Revolution in 1917, she couldn’t go back. Instead, in 1919 she moved to Paris, where she lived for the rest of her life. She travelled and exhibited throughout Europe and the United States, and in Paris, the centre of the avant-garde, she taught art. Her students included North Americans who further disseminated her work.

If you had to be exiled anywhere, Paris in the 1920s wasn’t a bad place to be, particularly if you were bohemian and artistic. Natalia Goncharova knew artists and designers like Sonia and Robert Delaunay and was an established part of the artistic scene. She had her own large studio which meant she could make large scale works and received a lot of commissions. One of these, a beautiful decorative screen composed of several large panels is on show. It has travelled from the Chicago Arts club which commissioned it and where it has stood ever since, no doubt as eye-catching there as it is here.

This is a great show, very inspiring and a good chance to soak up some avant-garde atmosphere.

Natalia Goncharova is curated by Natalia Sidlina and Matthew Gale with Katy Wan and is at the Tate Modern until the 8th September 2019.