In a break from the usual schedule, I’m in Tbilisi, Georgia, and it turns out that they also have brilliant fashion exhibitions here. So today’s review is of 60 Years of Made in Italy.

60 Years of Made in Italy

Firstly, a bit about Georgian fashions. A very little bit, since I’ve only been here a few days and what’s noticeable is the national uniform of a thin black padded jacket, worn by male and female alike. However, if you’ve been invited to the opening of a new exhibition in the Museum of Modern Art on the subject of art dolls (and I wasn’t, I just decided to peek inside the museum and was bewildered by how packed it was) you wear fur, real fur, and sometimes sunglasses. Fur is for the older fashionistas; for those in their 20s it’s long, glossy hair and some girls wear all black, with perfect dark plum lipstick, black skinny jeans and immaculate black biker boots, but with it all looking somehow polished, not goth. 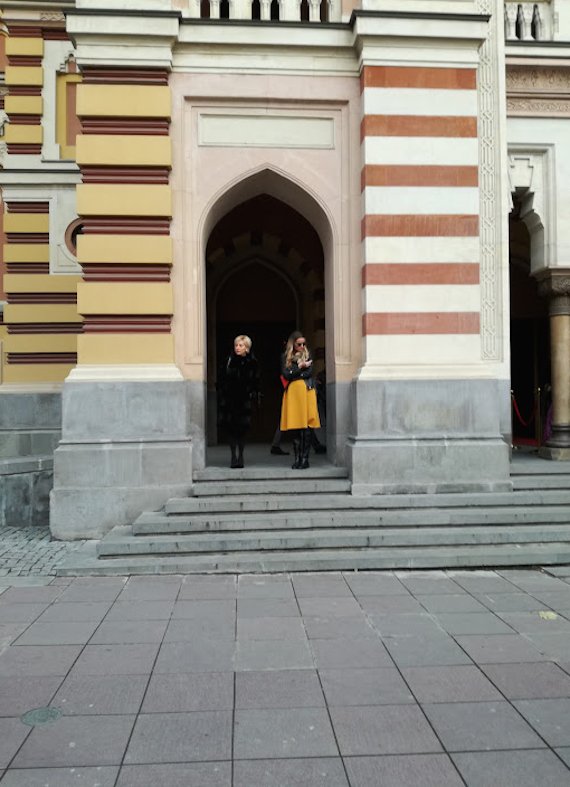 This is a very bored fashionista who was invited for the opening of the new production of the national ballet, and didn’t look too happy about it. Incidentally, tickets for both entry to the National Museum (includes three separate exhibitions) and for the ballet are 10 Georgian Lari – that’s about £3.00. For comparison you could get a small margarita pizza across the road from the grand buildings where these experiences take place for 23 Lari, or £7.00, I think our plan is to feed on art and culture, and skip the real food. (Well, not really. If you’re not attempting to get something to eat in the equivalent of Knightsbridge, Georgian food is lovely and reasonably priced.) 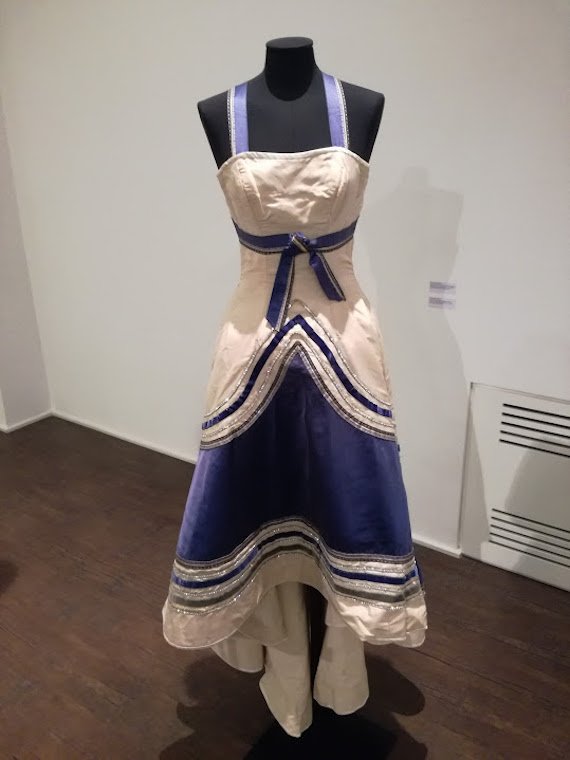 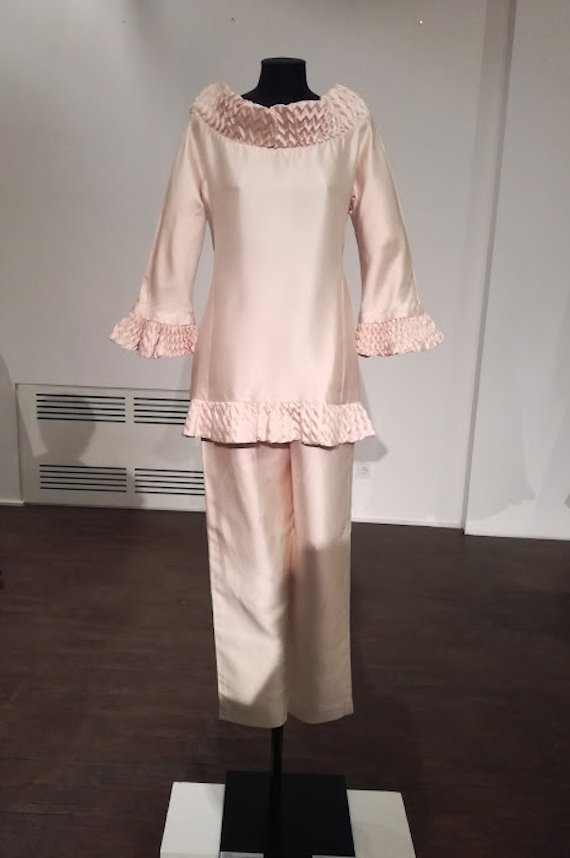 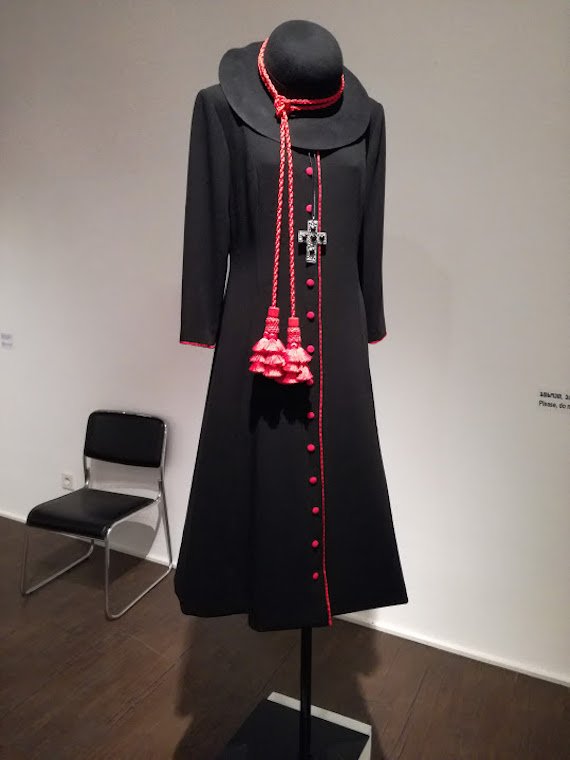 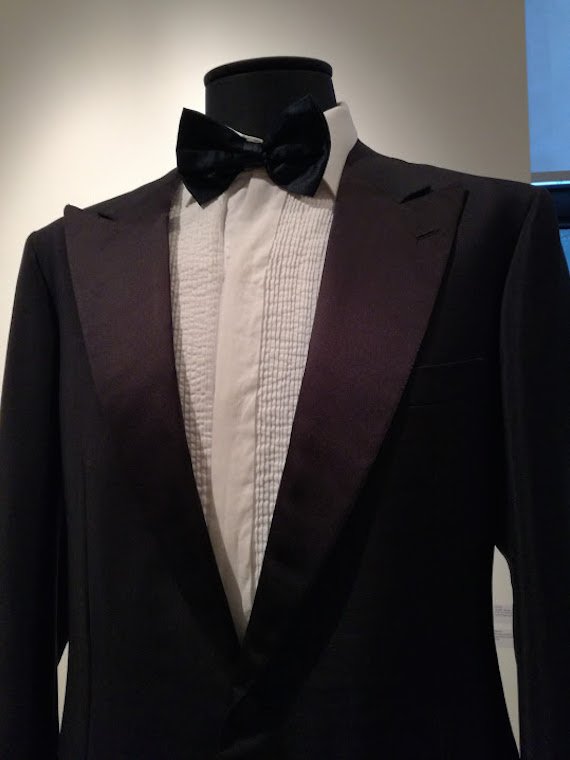 So, about the exhibition. 60 Years of Made in Italy, as the title suggests, has only Italian fashion no older than the 1950s, but predominantly the clothes are from the 1980s 1990s, and 2000s. Brands include some familiar, like Pucci, Krizia, Missoni, Roberto Cavelli, Moschino, Versace, Prada, Max Mara and Dolce & Gabbana, and some unfamiliar to me – I didn’t know Roberta di Camerino, Egon von Fustenberg, Lancetti or Sorelle Fontana.

In part I think that might be because some of these names are costume designers and not fashion designers per se – generally the names of the designers I didn’t recognise proudly shared a display label with the person who had worn or modelled the garment – Milla Jovovich appeared several times, as did Cindy Crawford and Naomi Cambell, while film stars included Sophia Loren and her favourite Fendi leopard skin coat, a heavy satin evening dress designed for Gina Lollobrigida, the pyjama set worn by Claudia Cardinale in The Pink Panther, the “Cassock dress” worn by Ava Gardner in The Barefoot Contessa, and a suit worn by Pierce Brosnan as James Bond.

60 Years of Made in Italy – A childhood fantasy 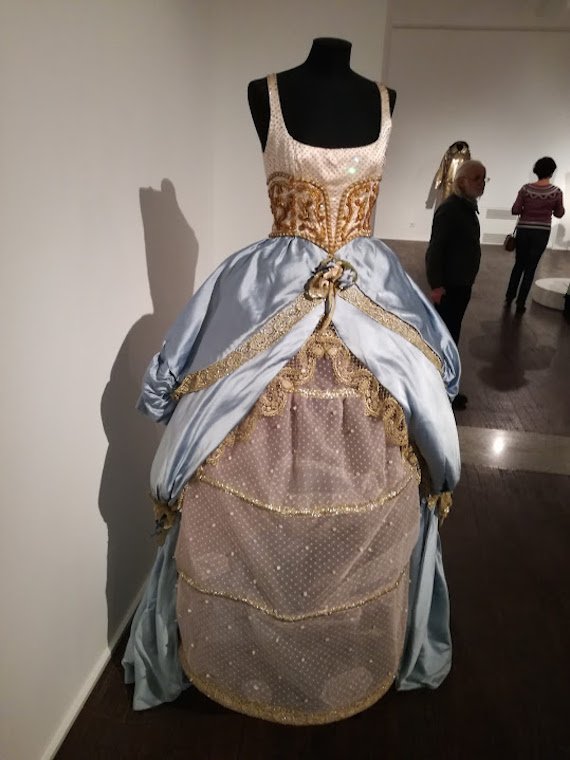 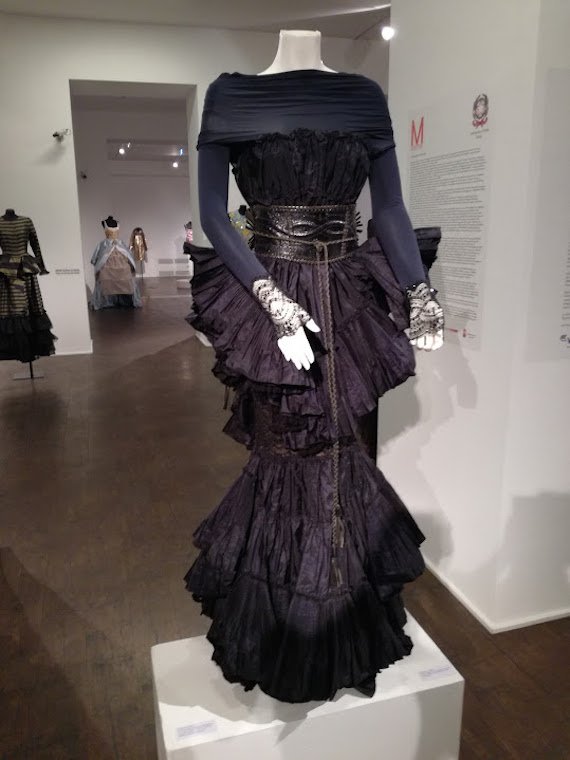 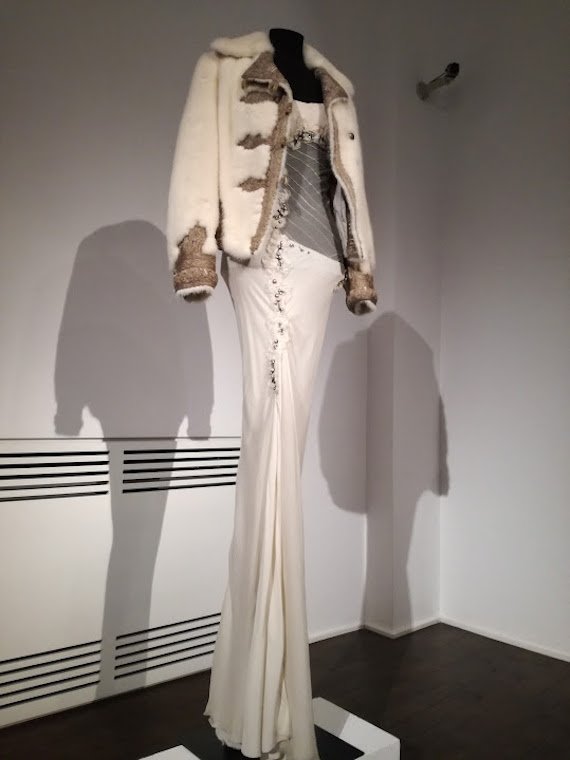 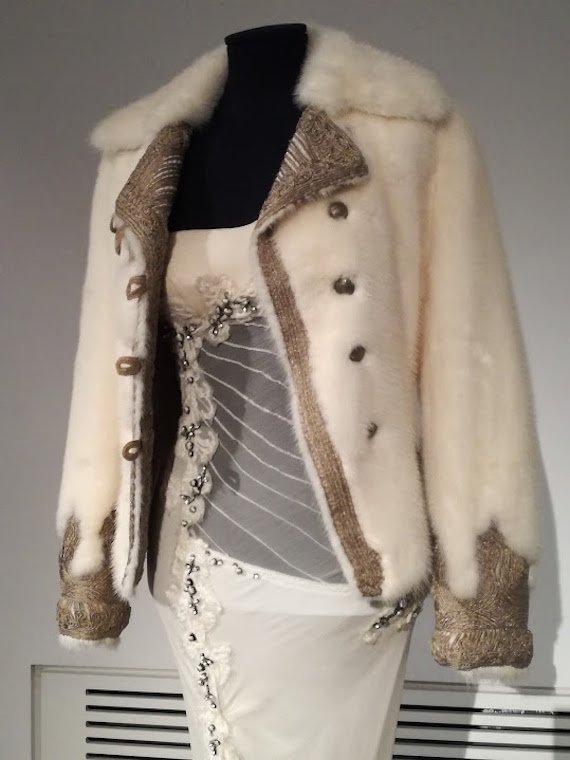 Detail of outfit with white ermine.

But never mind who wore them. The 60 Years of Made in Italy exhibition is a little girl’s dream, as evidenced by the hoardes of them prancing through the space, merrily flouting the chiffon ballgowns and stroking the fur despite the signs everywhere saying DO NOT TOUCH and taking selfies next to the Versace chain mail mini dress. Alternatively they took solemn photos of the dresses themselves, frowning closely at the stitching. These really were little girls, of about seven or eight – they’re going to grow up so stylish, judging by the attention to detail they were showing.

The reason it is so attractive to the child in all of us is that most of the clothes were exceedingly blingy – leopard fur and leopard print, chainmail encrusted with Swarovski crystal, heavily beaded, heavily tasselled, heavily hung with horseshoe nails, fur, fur and more fur, ballgowns and scarlet silk and plissé gold lamé. You could see it fit in exactly with its larger than life 1980s and 1990s time period. 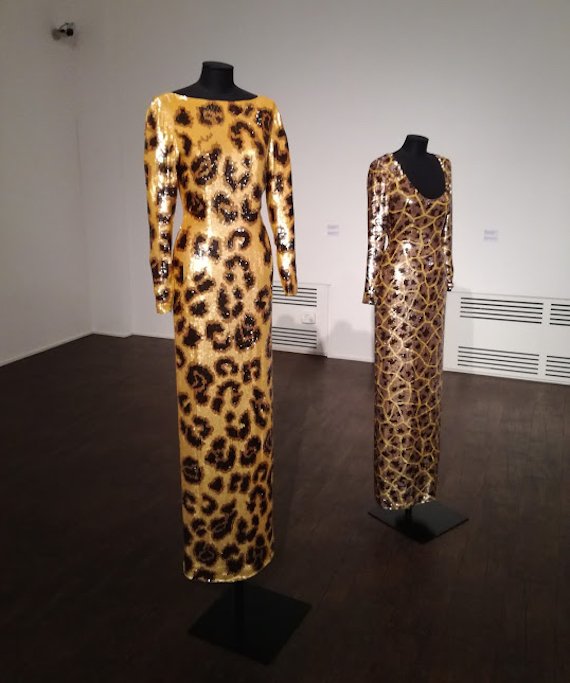 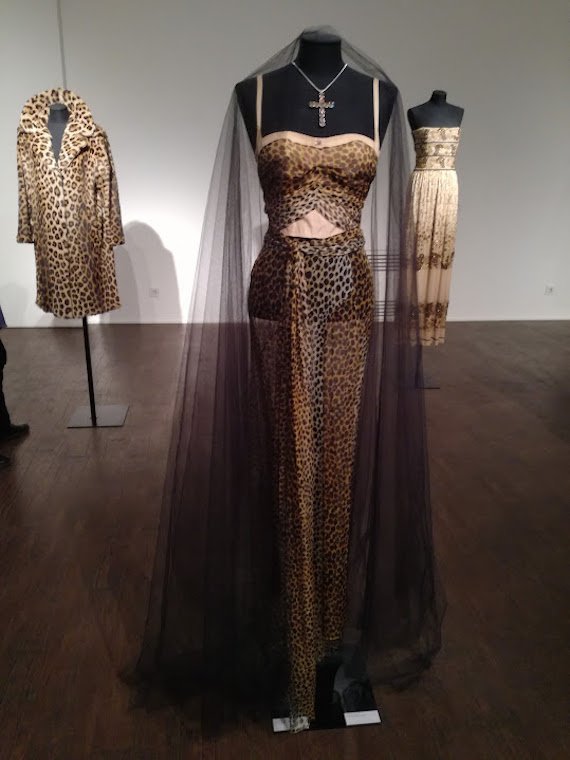 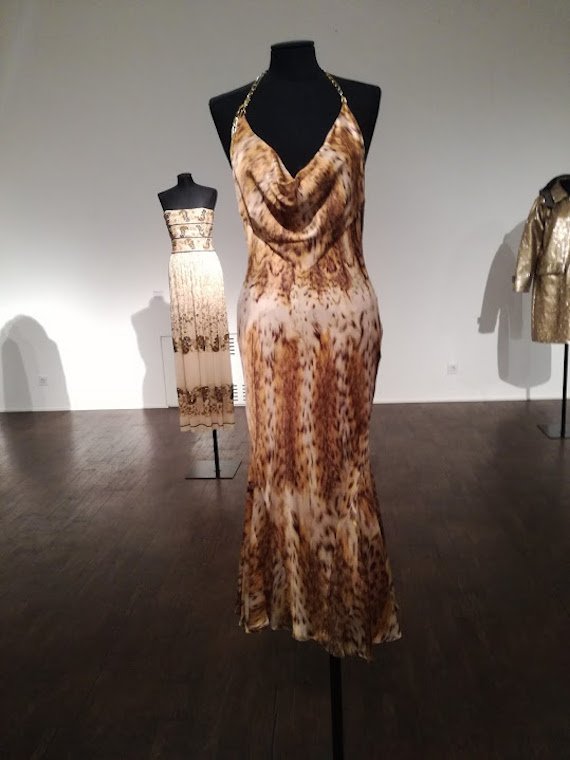 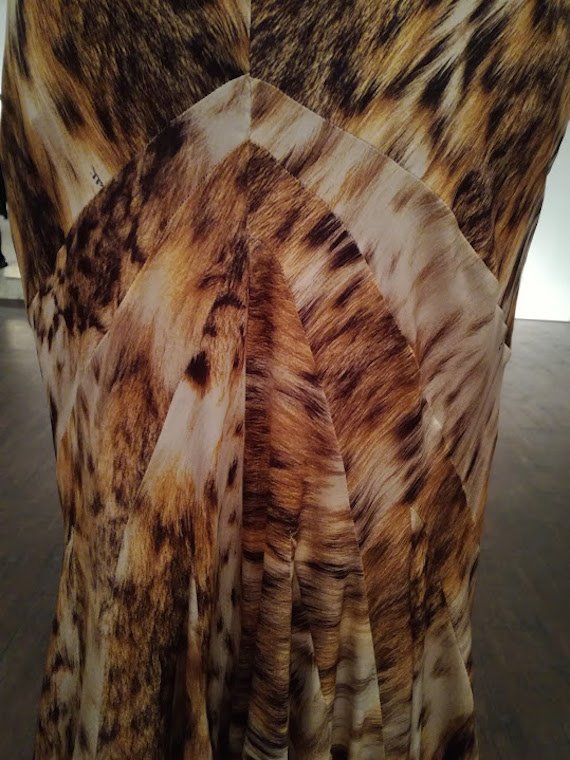 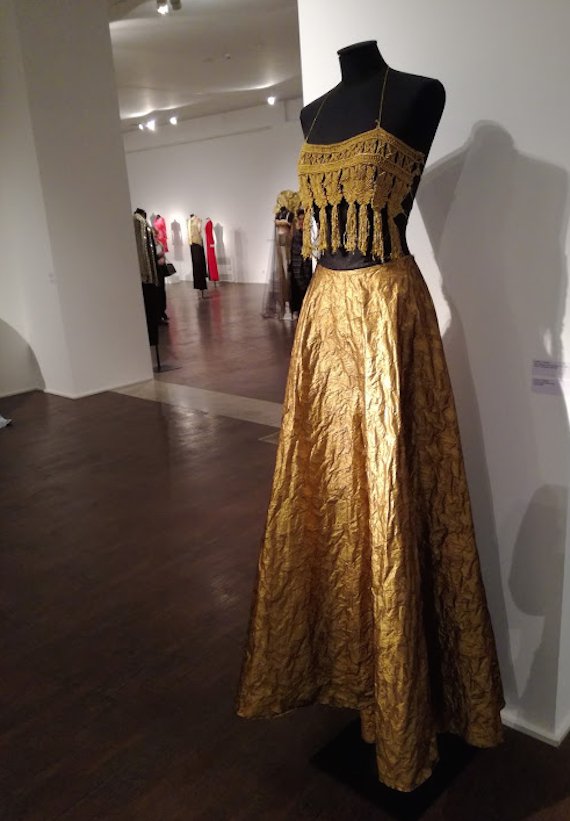 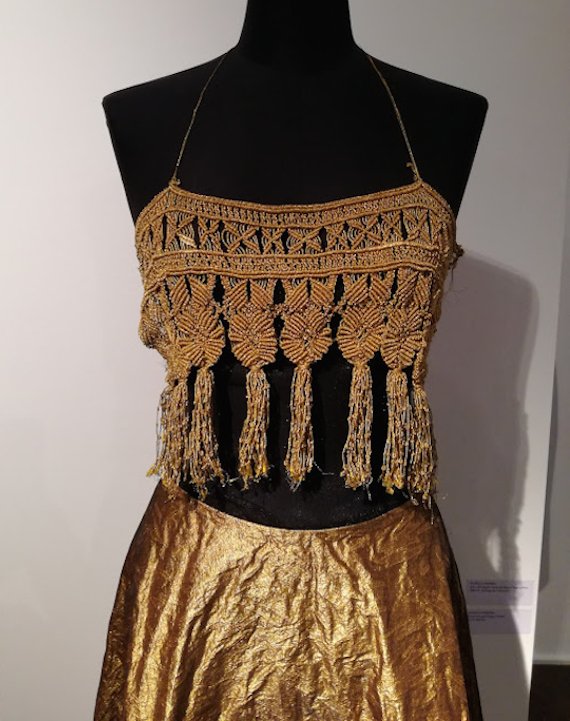 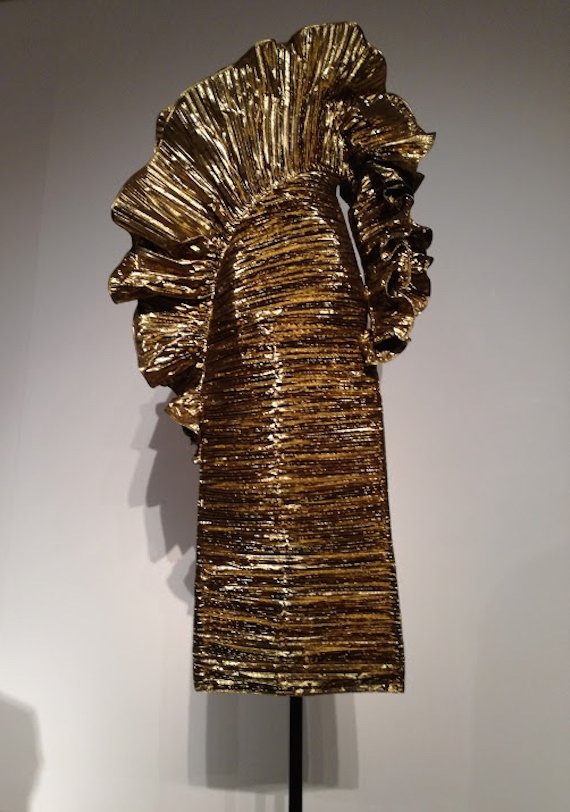 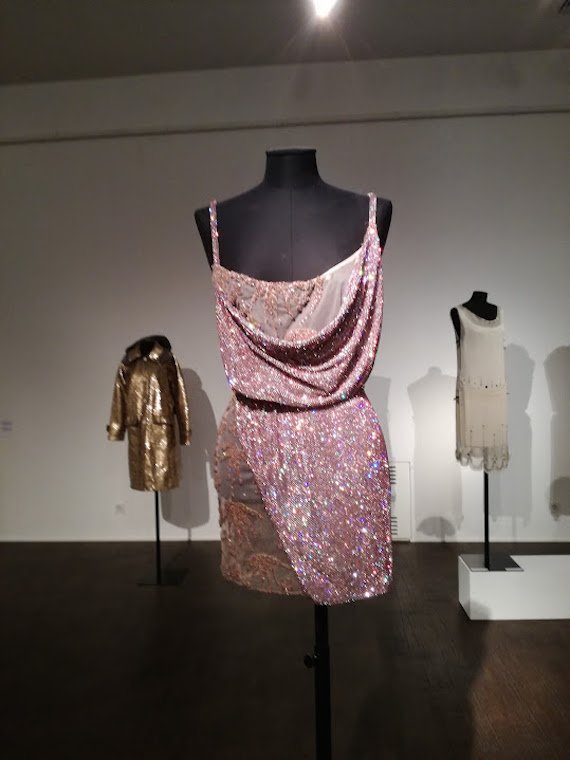 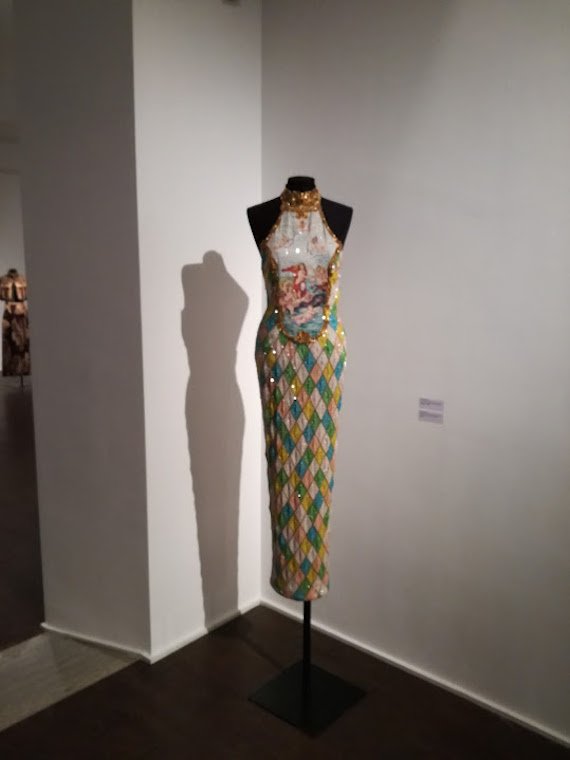 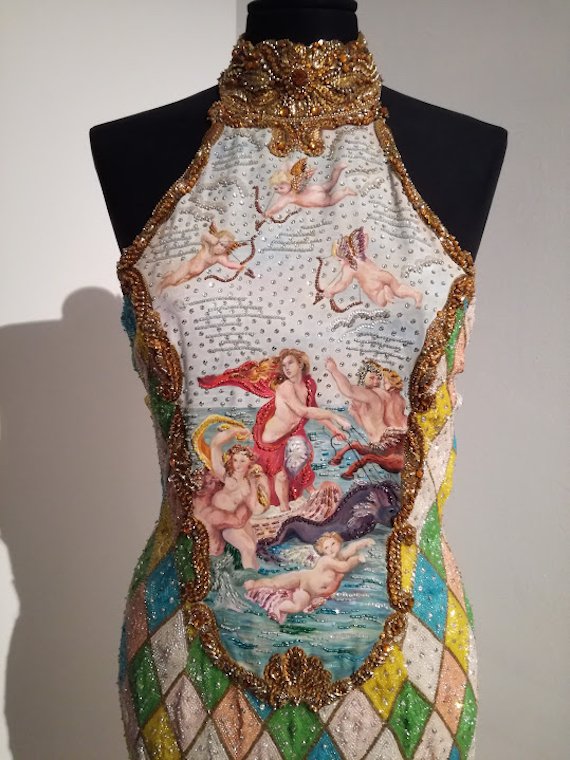 The design of the display in the 60 Years of Made in Italy exhibition was simple. Each outfit was hung on a matching black fabric headless mannequin torso of about the same size and slightly varying heights, with no barrier or glass (which is how the little ones could get so close). There was also no museum guard to tell you off from taking photos or getting too close, so the atmosphere was rather fun, if ultimately probably not very good for the clothes as artefacts. 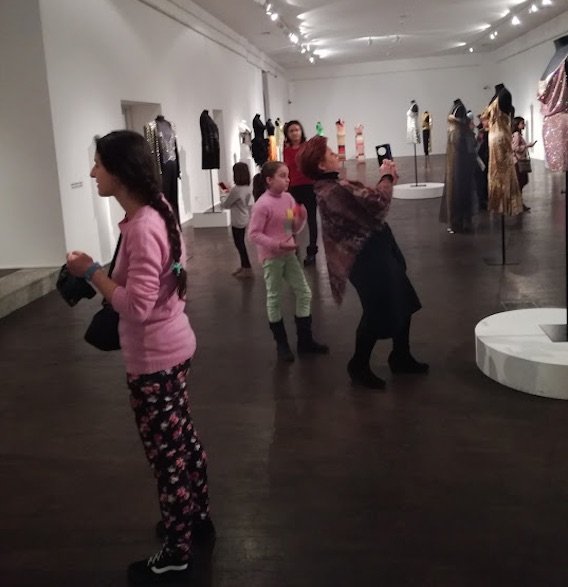 60 Years of Made in Italy – Construction

The advantage of this was that you got such a good idea of the construction of the clothes and how they might feel to actually wear. I didn’t know that Robert Cavelli dresses were so carefully cut – one dress in his signature leopard print with a halter neck made from a gold chain was nevertheless cut exquisitely on the bias with a fishtail to the back – a dress you’d have to swing your hips in when walking and feel like a goddess wearing. The tiny chainmail Versace minidress, as worn by Naomi, was created in the “Oroton” fabric the designer invented in 1982, recently modelled (albeit in a longer version) by Michelle Obama who wowed the crowds in an exquisite rose gold version last month.

There is plenty to see here too, with two large rooms full of both men’s and women’s wear.

The items in 60 Years of Made in Italy have come from private collections as well as the archives of fashion houses, with the criteria being that each piece is representative of its designer, iconic and recognisable, as indeed they are. Anyone visiting Tbilisi, which is also something I’d recommend on the whole, should also visit this exhibition.

60 Years of Made in Italy is on at Tbilisi Museum of Modern Art currently, and has been touring worldwide.

You Say You Want a Revolution