The codpiece – subject of many satires, and symbol of the ridiculous fashion sense and pomposity of Queen Elizabeth I’s Sixteenth Century court. Yet, like so many other fashion trends that seem strange to Twenty-First Century eyes, the codpiece actually performed a serious social function. Not.

The codpiece was trend that lasted from the mid-Fifteenth Century to the late Sixteenth Century – a hundred and fifty years of getting your c*ck out in public. 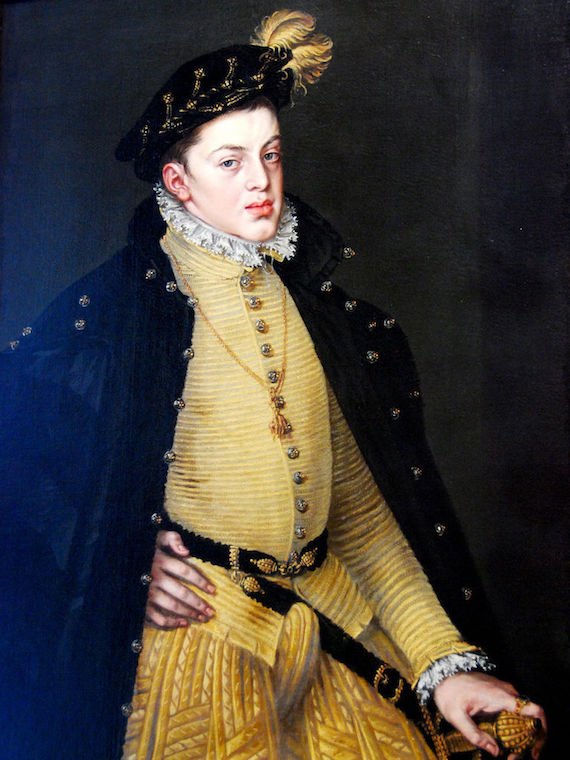 Very dashing, and not at all reminicsent of a banana. 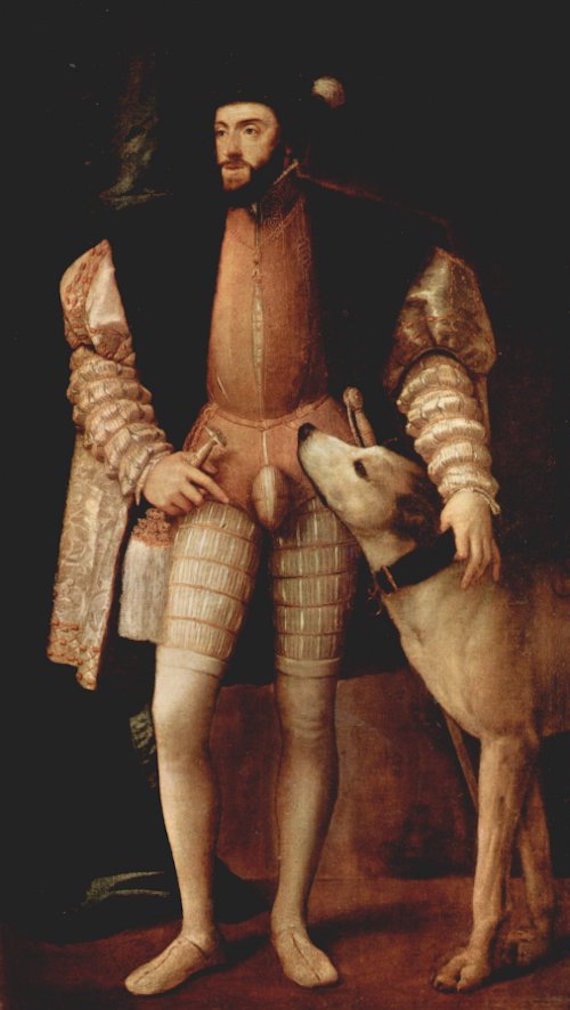 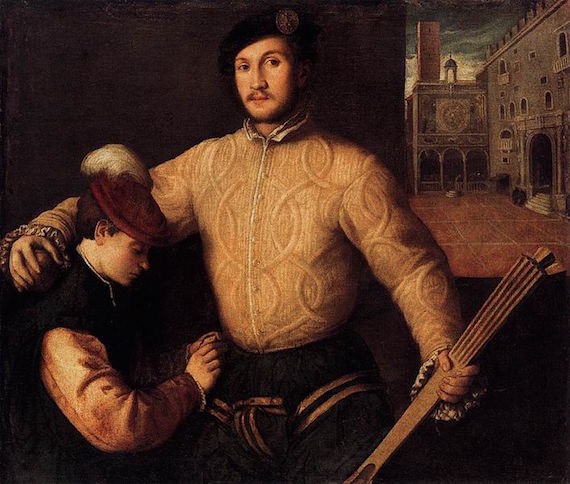 A Ballplayer and His Page by Francesco Beccaruzzi, first half of Sixteenth Century. Though it looks like the page may be the ball player here.

It consisted of a p*nis shaped pouch, attached to the trousers and stuffed, usually with fabric, to full and majestic erection. A man’s manhood was not generally actually inside the codpiece, but tucked away underneath, so it wasn’t there for convenient urination. It was there to say to the world “I am a man, I am magnificent, and so is my manhood”.

Today, some interpret the neck tie as a phallic symbol. There was no such messing around for the Elizabethan man – symbolism was rife in Queen Elizabeth’s court, but in some matters it’s best to be literal.

Despite myself, I can’t help finding pictures of would be serious statesmen dressed all in furs and holding important letters, with their willies apparently poking out, anything but very very funny.

In fact, underwear still exists that provides extra stuffing for a man’s bulge, making it look like there may be something in a man’s trousers worthy of investigation. But in comparison with the codpiece at it’s height (ha ha!) these padded underpants make a man look like he has an extra pimple on his privates as opposed to the imposingly jutting edifice of the Sixteenth Century.

The codpieces came about as men’s hose (breeches or trousers today) got tighter, and their doublets (jackets) got shorter in the 15th Century.“At this time… men took to dressing in shorter garments than they had ever done before, so that one saw their behinds and their fronts”, as Jaque du Clerq tells us in his memoirs of 1467.

Originally their “fronts” were covered with a basically triangular piece of cloth sewn at the crotch and able to be opened by buttons – a bit like today’s trouser flies. But this piece of fabric, now it was on show, started to be made even more conspicuous, and a layer of padding was added for a better bulge. Soon the trend was unstoppable, and the little bit of extra padding developed into the flying buttresses seen in portraits. And the subjects made sure that the codpiece was seen – paintings show coats and armour left deliberately open to display the fine projection. 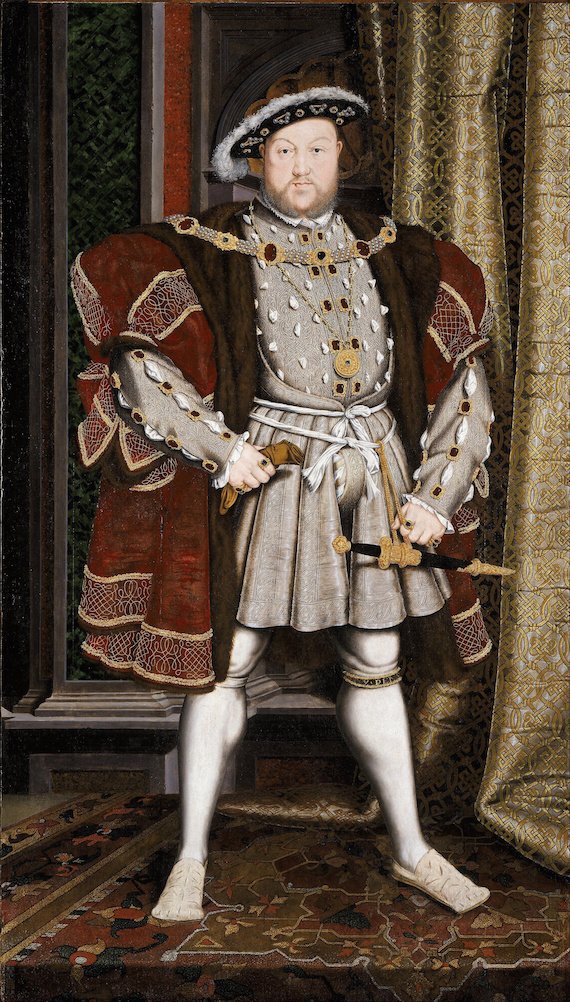 Henry VIII’s codpiece is quite shy in this portrait atrributed to the workshop of Hans Holbein the Younger.

Though sometimes they were relatively discreet and made of the same fabric as the hose, merely peeping shyly between the wearer’s legs, at other times the codpiece is in a contrasting colour or even several different colours against a dark background, be-ribboned, embroidered, or made of shiny shiny fabric.

They exist on suits of armour where the opportunity for embellishment is even greater – not only is metal the perfect material for something you want to stand out proud, it can be engraved and embellished, even bejewelled.

A fictional but not entirely unlikely codpiece worn by the giant Gargantua in Francois Rabelais’s satirical series of novels “The Life of Gargantua and of Pantagruel” has the hero wearing one with “two beautiful gold buckles with enamelled clasps, each of which gleamed with a large emerald, fat as an orange…” (he was a giant, after all). 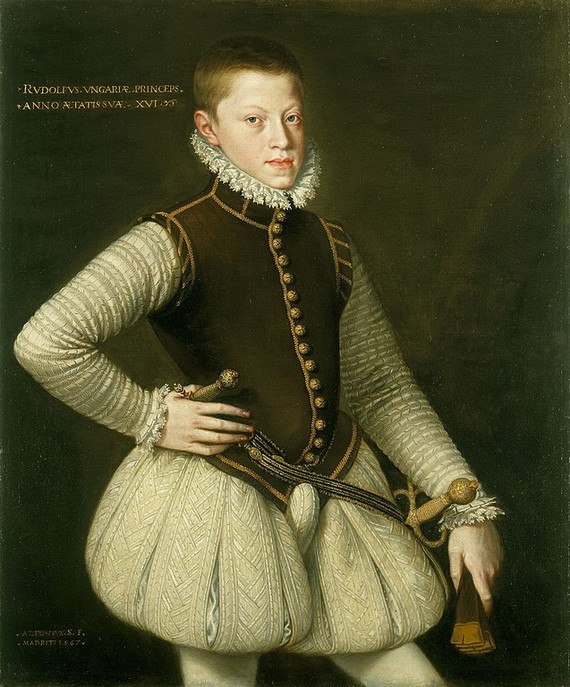 Archduke rudolf and his codpeice, c.1567

If it wasn’t practical to have metal in your codpiece, it could have a base layer of leather, or other stiff material. Ancient codpieces have been unearthed made of as many as ten thick pieces of woollen cloth, stitched together for a quilted effect. Others were stuffed with rags. Rags? Yes, because it was not just the high and mighty who wore codpieces – the remains of servant’s codpieces have been found, in more humble fabric yet no more humble dimensions than their excited, sorry, exalted masters.