Vintage womens knitwear has been with us so long we’ve taken it for granted. It’s been around since the beginning of time, or at least it feels that way. We take it for granted in the same way we take shoes and boots for granted, they’re always there and we wear them all year round, mostly in winter, sometimes in spring and less often in summer.

They’re the one versatile piece of clothing that we can wear that brings vintage clothing to life. Whether it’s jazzy Christmas jumpers of the 70s and 80s or fitted ribbed sweaters from the 50s, a good vintage knit is a lifelong friend if you take care of it properly. 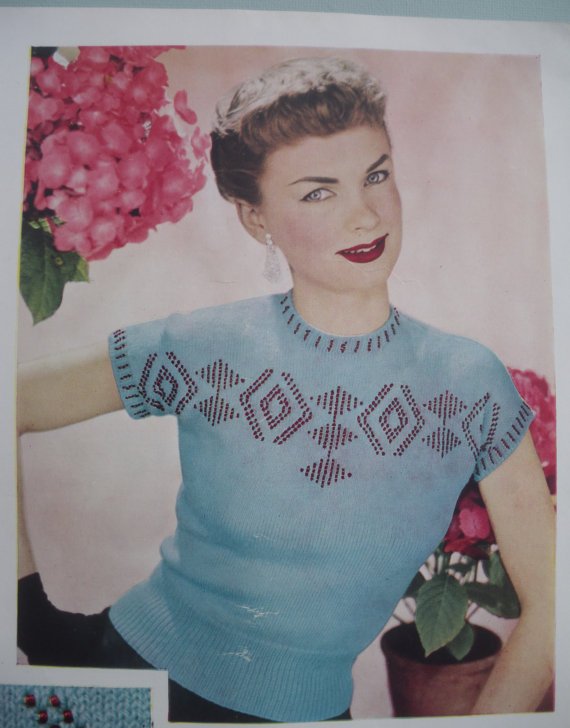 Vintage womens knitwear started out with socks and stockings

Without the need of a loom knitting can be done by anyone, you don’t need a knitting machine either, just a pair of needles will suffice. Knitting goes back centuries, to the 5th century, with socks and stockings being the first knitted items to make an appearance. And looking further forward there was even a guild of knitters in the 13th century in Paris and is still active.

Knitting was produced at home in Europe from the 14th century and naturally it was more popular in countries with a colder climate, especially for fishermen, shepherds and anyone who worked outdoors.

You may not be aware that knitting machines are not a recent invention but were around in the 16th century and before the industrial revolution, a machine knitted garment would have been considered much more sophisticated than something hand knitted.

And then the hand looms arrived for lacing and fine knitting, with the French inventing the circular knitting machines for the creation of stockings, and the first circular knitting loom being built in England in the 19th century. There were even schools to teach you how to knit (mostly for the poor). 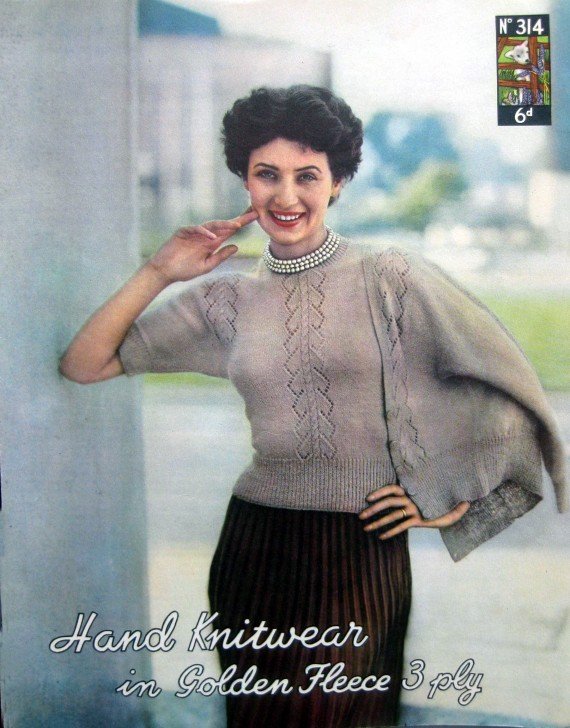 Knitting grew in popularity across Europe and with it came new creations. And yes it was the women, middle class, who made knitted garments at home. Knitted underwear was popular in the 19th century although it’s hard to imagine really, I mean can you imagine it – knitted undergarments?

Swiftly moving on the commercial production of knitted garments was a great success – and during the wars women contribute to the war effort via their own imaginative knitwear in the form of balaclavas, tank tops, scarves etc. From Chanel’s jersey knit dresses we go from sailor dresses to tubular ones. Chanel also designs theatre costumes and clothing for the beach.

Of course in the 1940s Vintage womens knitwear tight fit sweaters were the norm, with the growth in popularity of same colour twin sets. Of course as with the First World War in the second, women were again encouraged to knit for the war effort and as materials were scarce – wool was a luxury and recycled wool from old clothes was used to create new ones.

Twinsets were popular in the 50s vintage Womens knitwear as was home knitting, and during this decade we are given the Chanel knitted suit, a timeless classic.The 60s bring us Missoni and Rykiel and during the 70s knits are getting chunky with the popularity of knitting machines extending to home use. Scandinavian knits become popular especially for men, and in the late 70s punk brings holes to their knits in an anarchic punk fashion style.

In the 80s Vintage womens knitwear is big and bright with shoulder pads, but only worn by the older middle classes, for the young knitted clothes are seen as a tad old fashioned. 90s Vintage Womens knitwear brought us minimalism and androgynous styles and in the noughties knits are sophisticated, ribbed and skinny or baggy and chunky. Anything goes.