What do you get if you cross a kangaroo with a sheep in the 1950’s? Mens vintage knitwear, of course! For decades upon decades, well dressed men have yearned for yarn and many a man has worn wool well.

Today, whether knitted by Grandma and worn by Grandpa or modelled by cricketers in a rather British fashion, mens vintage knitwear gives you an all round look, be it suave sophistication or an ironic ‘I love ducks so much that I must express my love by embedding them onto my jumper,’ sort of effect.

Mens vintage knitwear is a must for any wardrobe and doesn’t just need to be saved for the winter months. 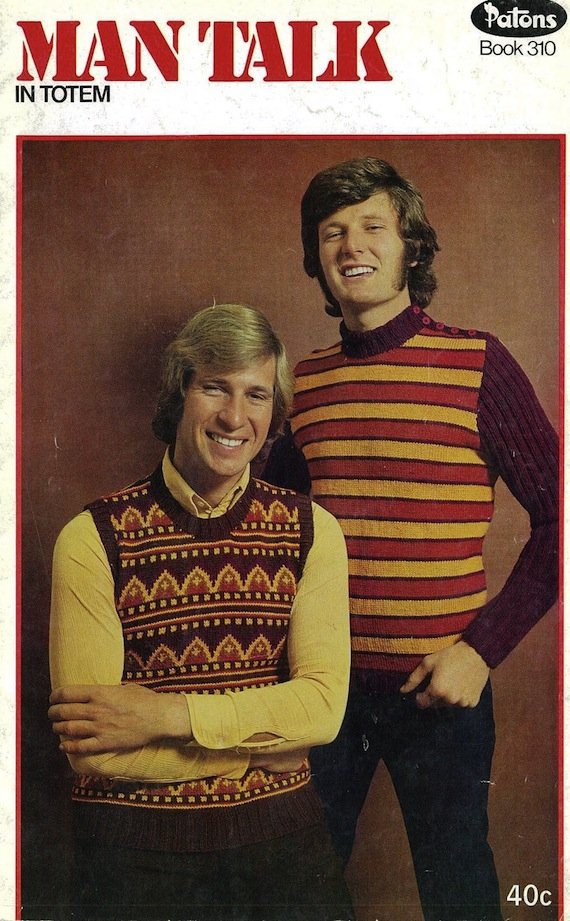 Men doing what they do – wearing Mens vintage knitwear whilst talking.

Werther’s Originals, Murray Mints, embarrassing jokes and pearls of wisdom. These are all gifts given to us by Granddads over the years and that’s why we love them. However, their best gift of all is undoubtedly their knitted attire which has become the inspiration behind mens vintage knitwear that is worn today.

Chunky knit, patterned and thick with extra added love, this vintage knitwear can be adapted for any style.

When worn as a cardigan combined with a tucked in slim fit shirt and tight fitting chinos, you will look far from old-fashioned or, you could just wear it as an over-sized jumper and combine it with a nice cup of cocoa on a bitter winters night, just like a real Granddad. Have no fear, you will still be at the height of fashion whilst enjoying your delicious beverage.

Fair Isle – the loveliest mens vintage knitwear of all

Fair Isle jumpers are undoubtedly vintage! They first rose to fame in misty 1920’s Scotland and have been the undisputed champion of jumpers ever since, finding their way into our wardrobes and our hearts as well as being the inspiration for many a Scandinavian knitwear designer.

They are both distinguished and bonnie. The classic Fair Isle design consists of linear rows of patterns such as snowflakes, criss-crosses and general loveliness. This is the type of mens vintage knitwear that will make your mother pinch your cheeks and tell you what a lovely young man you have become.

Walking in a winter woolly land! at Christmas

Winter would not be winter without the gaudy yet lovable Christmas jumper. Once shunned to the back of the wardrobe, they have now risen like a phoenix from the ashes of fashion faux-pas past to become a beautiful part of Christmas tradition.

This type of mens vintage knitwear makes a bold festive statement and wearing one is the deciding factor as to whether or not it will be a good Christmas that year.

If only Bob Cratchett had just worn the Christmas jumper that his mother had given him the previous year then perhaps Scrooge would’ve been less “Humbug!” and more “Let’s crack open the eggnog and prepare the mistletoe!”.

From A- Z list, many a celebrity has chosen to embrace this kind of mens vintage knitwear because hey, what’s Christmas without your favourite celeb looking like a right wally for our entertainment?

I just don’t give a flying duck!

Look how happy he is knowing how great he looks.

Look at all those jumpers!

I don’t know what they are looking at, or even if they are real. But I do know that they are winning at Christmas.