Raincoats are a perennially popular fashion item, and because the style doesn’t change much at all, womens vintage raincoats are a really good choice.

You’ll find classic labels like Burberry in vintage stores, and you won’t be paying hundreds of pounds for them, either.

WW1 soldier in a Trench Coat

Gaberdine was invented by Thomas Burberry as a lightweight, tightly woven waterproof fabric in 1856. The fabric isn’t treated with anything to shrug off the rain, it’s simply a part of the design.The gaberdine fabric was made up into raincoats.

The original trench was calf length, beige in colour and came with a detachable lining. They were massively popular and so practical that soldiers in World War One wore them as part of their uniforms. They are light, easy to carry, and protected the men from rain.

The design carried over into World War Two and continued to be worn by men in every day life. They’re convenient because you can just slip them over a suit and they’re not too bulky.

The design of the trench coat hasn’t changed at all since then. A traditional trench coat will have a belt that buckles at the waist, straps on the wrists to keep out the wind and rain, and buttoned straps at the shoulders, which were originally meant for holding your hat, gloves or for securing a bag strap.

It wasn’t just Burberry who made the coats of course: they were quickly copied by other companies. They have been worn by both men and women throughout the 20th Century. 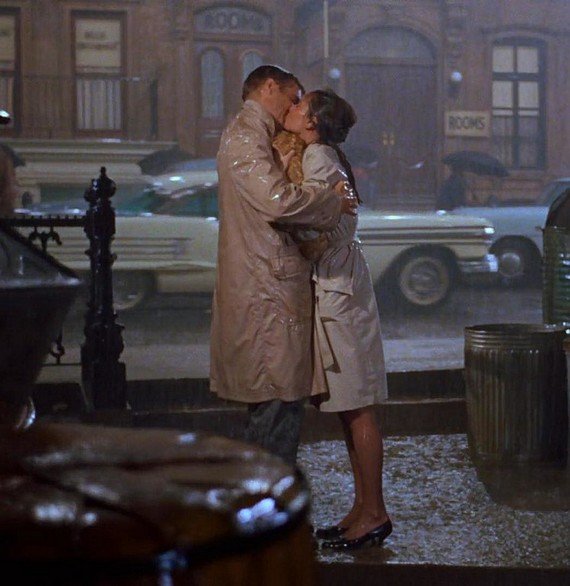 Audrey Hepburn and George Peppard in Breakfast at Tiffany’s, 1961 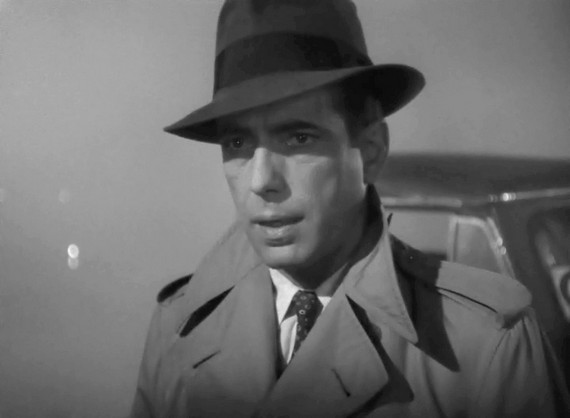 No 40s film noir would be complete without a trench coat, whether worn by a man (Humphrey Bogart rocked a killer trench look) or a woman.

A woman in a trench symbolizes a woman who means business (either that or it’s raining, itself a bad sign in a noir movie).

Ava Gardner looked scary in hers when she donned one for “The Killers” (1946) and Audrey Hepburn looked adorable in hers in “Breakfast at Tiffany’s” (1961).

Paul Newman and Joanne Woodward had matching Womens vintage raincoats for “Paris Blues” (1961) and Meryl Streep looks first lost in hers for “Kramer vs Kramer” (1979) and then pretty chic in “The Devil Wears Prada” (2006).

Marlene Dietrich wore hers off screen as well as on, to add to her androgynous charm. In fact, that’s part of the appeal of the trench – it’s utterly plain and depending on how you wear it can be masculine or feminine in effect.

Worn a little large, open and belt trailing, over wide trousers and some converse (though I’m reliably informed that Marlene never sported this footwear) you have a casual, masculine look.

But wear it short and cinched at the waist and you’ll look pretty as a picture. Wear it all buttoned up with some fancy shoes and you’ll either look mysterious or as if you’re going for the “I’ve got nothing on underneath this but stockings and high heels” effect.

The trench coat was popular with Parisian intellectuals of the 60s and you’ll find that designers revisit this classic year after year.