Mens vintage coats are perfect for a man looking for an extra hint of style. For formal, well cut wool jackets try looking for pre-1950s coats.

Austerity regulations were in force in the 1940s to early 1950s, but they didn’t affect menswear as much as womenswear. In fact, men’s suits and mens vintage coats were still quite generously cut, with wide trousers and long jackets. The regulations meant that turn ups on trouser cuffs had to go, buckles on waistcoats were lost, and patch pockets disappeared, but these were small details.

But an English gentleman was supposed to have a wide range of suits for different occasions, one for when in town (the lounge suit) one for casual wear (the sports suit), one for playing golf etc. Fabric shortages, more than utility regulations, put an end to this, even if you could afford a huge wardrobe. 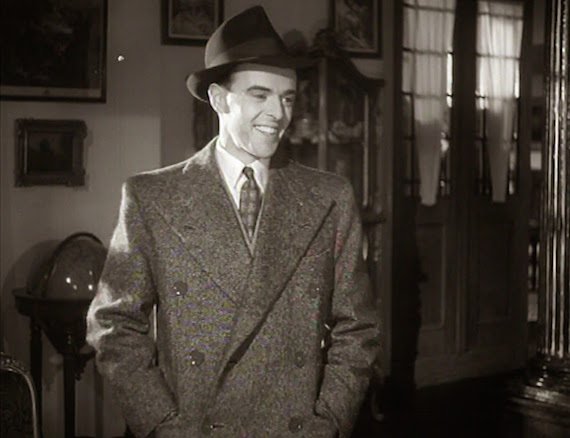 A wide boy is a dodgy geezer, standing on a street corner or waiting in a pub to sell you something that fell off the back of a lorry. A spiv is pretty much the same thing. I don’t know about the origin of the word ‘spiv” but “wide boys” were so called because their ties were wide, and so were their lapels and stripes. They were immaculately dressed, in mens vintage coats, double breasted suits and neatly trimmed moustaches but kind of flashy with it.

Spivs and wide boys date from just after the second world war in Britain, when most things were in short supply but there was always a man who could sort you out with what you needed. So if you want to look like a wide boy, try a double breasted suit, soft felt hat at a jaunty angle, and a really wide striped tie.

If you want to look a bit Left Bank Cool, look for a pin striped mens vintage coats a bit too big for you perhaps, worn with a flat cap and, of course, no tie or waistcoat. Instead, a fraying sweater over your shirt should do the job for you. Clamp a fag in the corner of your mouth and add a quizzical air. 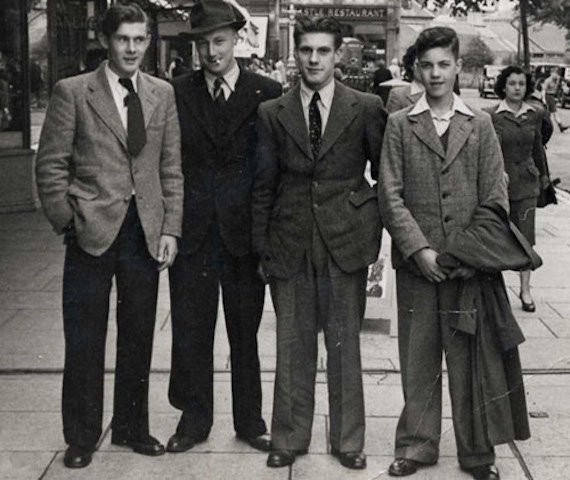 One suit was issued to each British soldier at the end of their service, or on demobilisation. The soldier would hand in his uniform and tell the clerk his measurements, and he would be handed a three piece suit, shoes, and an overcoat in return. He also got a rather severe haircut to start his civilian life.

The soldier didn’t really get to pick the colour or cut of the suit – they could be charcoal, navy, black or brown, sometimes pinstriped and double or single breasted – and though the fabric was usually good, it was debatable if this made up for the usually bad fit. Still, for most it was a huge relief not to be in the trenches any more, and who cared if your suit didn’t fit?There was actually a black market in the suits, and wide boys (see above) stood outside the demob centres waiting to buy the suits from ex-soldiers for what amounts to several hundred pounds in today’s money.