70s vintage mens leather jackets are brilliant if you want to keep warm, want to look like a Cowboy, a secret agent (wait, was Shaft a secret agent? Let’s just settle for super-cool dude), or, er, a used car salesman.

There was a rash of Western films in the 70s, beginning with the incredibly popular “Butch Cassidy and the Sundance Kid” in 1969, and suede and sheepskin coats were all the rage partly because of this.

There was also the American TV series “Alias Smith and Jones” of 1971-73, where the outlaws rejoiced in their leather jackets, suede and sheepskin.

I’m not sure how authentic these costumes were, since the outlaws were meant to be from the days of the Wild West, i.e. the turn of the century, but admirers of the series didn’t seem to care much and the trend was sparked. 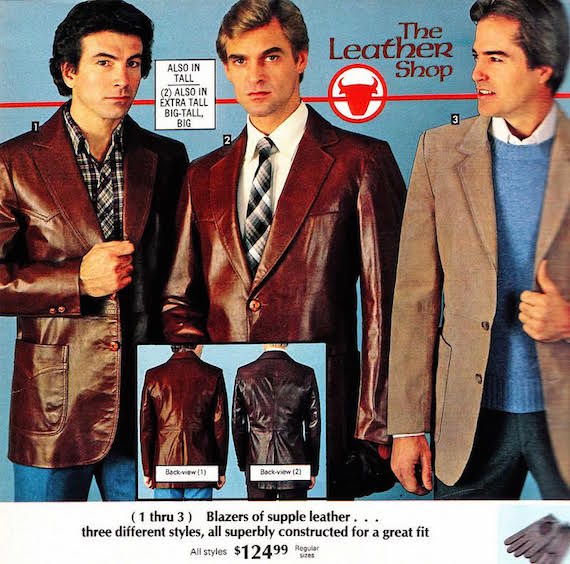 Another big plus of this style is that they were warm and practical, since British winters were still really cold in those days. American ones too – I love how this ad announced that the stylish leather jacket is “plaid lined” – somehow leather seems not so sexy when it’s plaid lined, I don’t know why.

“Only Fools and Horses” started in 1981, but David Jason as Del Boy totally nailed that 70s vintage mens leather jackets look, both with his sheepskin number and his brown leather jacket. He thought he looked totally swish, and he sealed his reputation by smoking massive cigars and using French phrases incorrectly. Arthur Daley from British TV series “Minder” was also seen in similar gear.

In fact, he always reminded me of my dad in the Seventies, probably because my dad wore a lot of corduroy, also looked rumpled and is it my imagination or did he have one of those coats too? Yes, he definitely sported a huge sheepskin jackets. He was not, by the way, a used car dealer.

Finally a totally different trend was sparked by “Shaft” in1971. Shaft was the first big success in the Blaxploitation genre, and it was easy to see why: Richard Roundtree as the titular character was just so darn cool, whether wearing one of his variety of 70s vintage mens leather jackets or clad in one of his equally iconic polo necks.

The film was re-made in 2000, with Samuel L Jackson in the title role. Not as good. Richard Roundtree just was Shaft.

The wonder of 1970s film fashion