The Future Starts Here is the V&A’s exploration of “futuristic” design and tech which we are already using. Futuristic in a 60s sense, almost mundanely every day for us in the here and now. You know, robots, artificial intelligence, bio-art, wearable technology, that sort of thing.

It’s specifically the wearables that I went to see, with their obvious relevance to fashion. I think there is scope for a great exhibition on this subject alone. Fashion is extremely technologically eager in many ways, with advances that are so specialised or hidden within the industry that they usually go unremarked. New types of fabric and fibres are being constantly explored, developed, and utilised, and computer aided design and laser cutting are very old news.

Attempts to more visibly engage with robotics and tech have been variable: Alexander McQueen did it with verve, as with his stunning finale to the SS99 show where Shalom Harlow, in a white tulle dress, stood helplessly on a turning podium to be somewhat viciously attacked by a robot (remote-controlled by McQueen himself) that sprayed both her and her dress with paint. The whole thing was balletic and disturbing.

McQueen, always fascinated by technology, also made a cyper-punky working light-up circuit board outfit in 1999 and also constructed a very credible ghostly holographic rendering of Kate Moss for his AW06 show. Hussein Chalayan made news with his remote-controlled robotic dresses in 2011 and has incorporated LED lights into creations too. Wearing working electric lights isn’t new, however: in 1921 Luisa Casati went to a ball in a dress covered in tiny lit electric bulbs – it gave her a massive electric shock but certainly made an impression.

As for wearables, Henry Holland made a clunky attempt to utilise them during his SS16 see now buy now collection. Each audience member was equipped with a frankly massive ring in which was embedded a chip preloaded with the potential buyer’s money. If they wanted to buy an outfit they went up to the model who was circulating the crowd wearing it and chinked jewellery with her. The transaction was recorded and rather like beeping your oyster card, the cost of the transaction was deducted from the pre-loaded money on the ring.

Chips to store information like this have now been embedded into temporary tattoo style transfers so that they can be worn as a fingernail deco, which would certainly have been a more elegant solution, not to mention all the arrangements with pre-loading the jewellery with money and presumably refunding it afterwards if there was nothing you fancied buying at the The Future Starts Here show must have been a bit of a faff. 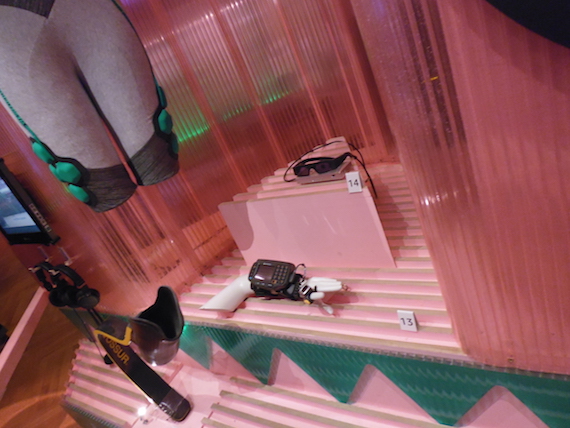 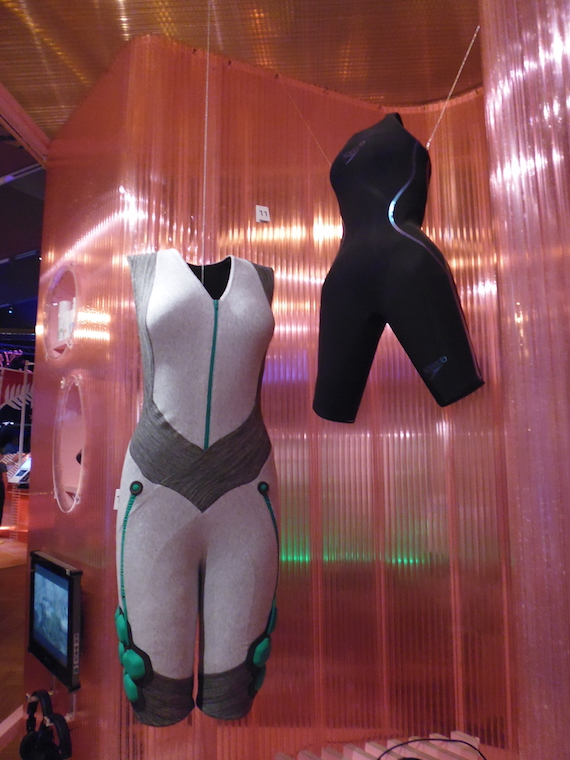 The wearables at The Future Starts Here were less concerned with haute couture and more with sporting, business and medical applications. Wearable technology is just that – a kind of technology that you wear on your body. So headphones or earbuds are very early wearables.

One wearable that has seen concern is that issued by Amazon to its warehouse employees. This bulky piece of kit comprises a computer on the wrist which is attached to a scanner on the finger. The scanner checks automatically that the right item has been picked and feeds back into the main Amazon computer system, which can issue correction via headsets to the employee of need be. However, this system, while increasing productivity and decreasing mistakes, seems to make the worker into a kind of human robot, by passing autonomy.

On the other side, a personalised wearable that has seen massive voluntary uptake in recent years is the Fitbit, one of which was featured in the The Future Starts Here show. The Fitbit is a relatively inexpensive piece of technology with a mass market appeal – it sits on your wrist like a watch and counts your steps, monitors your sleep and tells the time. This data can be downloaded to a smart phone and made into graphs. Theoretically, the data can be fed into a larger pool of personal information, which might be gathered through more sophisticated devices which work by analysing heartbeat, temperature, chemicals in your breath and even the vitamin content of your sweat to form a picture of a person’s health at any given moment.

The information can be analysed by any home computer possessing the appropriate software which can then recommend any necessary remedial actions – for example, taking a certain vitamin tablet, eating more protein, trying to get more rest for the health conscious, or for those in need of medical support, taking medicines or going to the doctor. The constant stream of information recorded is also very useful to medical specialists in making their diagnosis.

Another wearable at the The Future Starts Here show was less concerned with information gathering and more with practical assistance. The exosuit bodysuit designed by Seismic Powered Clothing contains cells at the thigh and mid-back which electrically stimulate human muscles, enabling them to have more power. It is marketed to the elderly to help with sitting up and lying down, getting up from chairs and walking.

And talking of practical assistance, on view in The Future Starts Here was a swimsuit designed by Speedo which is designed to compress the muscles to reduce fatigue and drag in the water. It was so effective that the full length version was banned at the 2008 Beijing Olympics where 98% of the medals were won by swimmers wearing the suit. In 2012, Jonny Peacock wore a carbon fibre running blade to win the London Paralympics 100m sprint. This prosthetic is represented, as is a t-shirt covered in solar panels so that your mobile may never run out of battery. The question is posed – since our mobiles are never far from our hands, could we consider it an extension of ourselves? And in that case, are we already becoming robots?

Maybe, maybe not. To bring the future-terror down a peg or two, the curators include a very early version of wearable tech. A Roman-era key, shaped to fit the finger on a ring. If the Romans thought of wearable technology 2000 years ago, we are only continuing a very slow-growing trend. In that case we might have a few years left after all before we become assimilated by the Borg.