rI am, I reluctantly have to concede, a Northern girl. I’m from the Midlands, which we never thought was North growing up, but it’s way more like the North than any other place I’ve lived. Is there such a thing as Northern Fashion, though? It’s another thing I’ve never considered.

Of course, I know vaguely about the North/South stereotypes. The soft Southerners and hard-as-nails Northerners; and “Yorkshire born and Yorkshire bred, strong in the arm and weak in the head”.

When I lived in Barnsley the predominant going-out look was tiny tight skirts, no tights, no coat and high, high heels, even in winter. Was it because my friends were tough but foolhardy, or was that just the look at the time plus a general reluctance to pay a pound for the cloakroom?

North: Fashioning Identity asserts that there definitely is a certain perception of Northerners and that they do have a certain way of dressing – there is such thing as Northern Fashion. Pointing to programmes like Coronation Street, the Royal Family and Gogglebox the curators, Lou Stoppard and Adam Murray, suggest the Northern family is tightknit, humorous, and by implication, poor.

They say that in the popular imagination, it adheres to a very heteronormative, patriarchal structure – the women bear children, and stay at home caring for them, whilst the man goes out to earn the daily bread. Yet what I think they are talking about is a mid-20th century working class.

I have seen the documentary photos of almost the destitute in Liverpool the 1960s, those commissioned of Nick Hedges by Shelter to show the real conditions of the working class. They are just as described. This exhibition has a striking photo of Northern miners and their pit ponies; of Northern wives hanging out the washing or shepherding their children.

Yet I have seen black and white photos of London washing lines too, and isn’t the TV series Call the Midwife about the grit and determination of the Cockney poor, where women pop out kids while their husbands are out at work? I think what they are describing was and is a countrywide phenomenon.

All this suggests I didn’t like the exhibition. I do. I just think it is a bit of a difficult to sustain the theme. There are photos of Northern models Abbey Clancey, Karen Elson and Agyness Deyn, and Southern models (would we ever call them that?) in Northern locations. Stella Tennant is in a boxing ring in a boxing hoodie and pants, Kate Moss is in a Blackpool hotel, appalled, as the accompanying video shows, by the new experience that this nice girl from Croyden has never had. Doubtless there are grimy rooms with lurid carpets in Croyden too. In fact, I don’t why she seems so surprised – photographer Corinne Day was always putting her in some grim location or other.

But having said that, as far as fashion and style goes, there are regional varieties in dress and different style tribes in different cities and towns. Of course there is. So while I don’t personally, think there is some kind of Northern Fashion, a trend like Northern Soul, which is briefly mentioned in the exhibition, did happen.

Raf Simons based a collection on Northern Fashion and it is based on overlarge or overshrunk hand-me-downs, clothes you could dance in – the fashion of teenagers going clubbing in the 1970s. Similarly the ravers of the Manchester scene – “Madchester” wore bucket hats and their t-shirts baggy and bright. So did we in Derby, though I don’t know whether these fashions, again designed for maximum practicality in dancing, ever crossed the North/South divide. 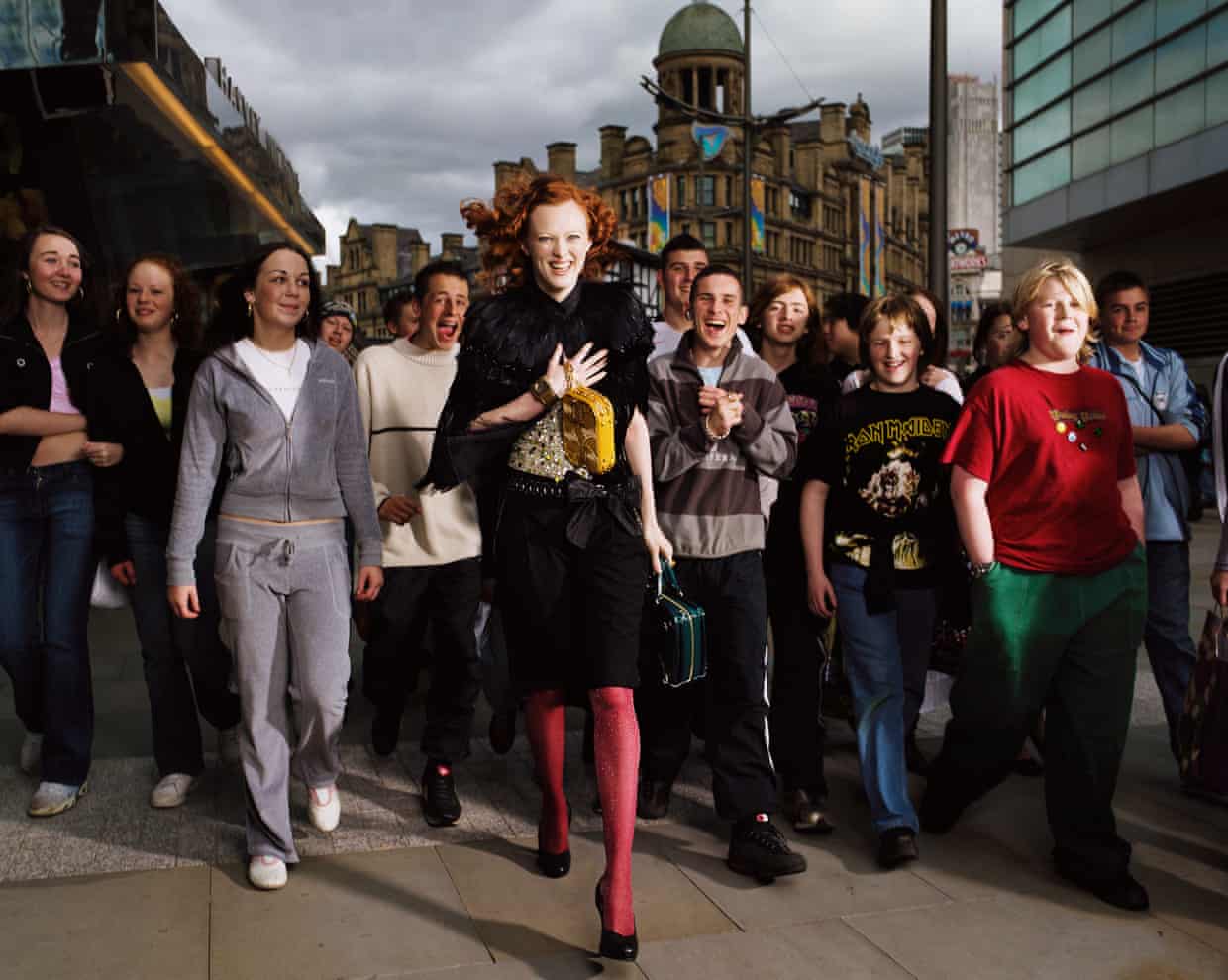 But putting the theme aside, it is an exhibition that is lovely to view, fun, draws you in. I always love to see exhibitions away from the white box; I don’t know whether exhibitions in places with more definite architectural features feel incongruous or actually more harmonious.

Rachel Whiteread is at Tate Britain at the moment, partly in the Duveen Galleries. Her colourful resin casts of the underside of chairs look amazing in the stately surroundings (go see it). I will never forget Anish Kapoor’s cannon, firing wax at the moulded cornices of the Royal Academy.

And here at Somerset house, Northern Fashion, Fashioning Identity is hung in a series of rooms, white painted yes but with pretty fireplaces and arched entrances. The content is a mixture of framed photos, both colour and black-and-white, of differing dimensions from the monumental to the more intimate, sculptures, artefacts such as magazines, installations, room sets and videos presented a number of interesting ways.

The photographs are both documentary and Northern fashion, some landscapes, too. The curators have been able to call on some excellent sources – my favourite pieces were a 1965 picture, taken by John Bulmer for the Sunday Times Magazine in 1965 of two teenagers, their hair in curlers and headscarves, eating chips in Elland, a small town in Yorkshire. The second, possibly for its brave framing in almost neon orange is a pastoral scene of hay bales against an idyllic blue sky. Unfortunately, I did not catch the name of the artist.

Tony Hornecker, the Northern Fashion set designer, has created a series of vignettes of rooms where visitors can sit and listen to interviews with various fashion world people who are from the North. They include an old fashioned high backed settee and telly, a tinsel curtain, a bus seat, a bed with crocheted granny blanket, bedside table with telephone and mug and even a church pew with wooden cross. The accompanying videos use Google Street view with other images to explore the areas the interviewees are talking about.

Overall, the show is well thought out, well laid out, and ultimately fun. I think it’s an exhibition about the British working class, but even if they want to call it one about Northern Fashion, you should still go see it.

North: Fashioning Identity is at Somerset House until 4th February 2018.

Shop now
20% off your next purchase
Use CODE: VINTAGE for 20% Off Your Order
SHOP NOW