It’s no exaggeration to say that fashionistas are really, really excited about the Azzedine Alaïa Exhibition : The Couturier which has just opened at the Design Museum. Alaïa is a designer best known for his work in the 1990s, modelled by the famous supermodels who he loved, looked up to (literally, because he was tiny and they were tall) and looked after. He was nicknamed “The King of Cling” for his use of super strong lycra, but this exhibition shows there was more to him than bandage dresses.

Azzedine Alaïa was very involved in curating this exhibition, having visited the Design Museum when it first re-opened and deciding he would love to be considered in a serious design context. He had a vision of an informative, careful but beautiful show, focussing on his techniques and setting him alongside the couture greats.

Unfortunately the designer died before the plans for the exhibition was complete. At the Design Museum, curators wondered if they should cancel the exhibition or turn it into a huge celebration of the designer’s life; a retrospective of all he’d achieved. But old friend and co-curator Mark Wilson stepped into his shoes, insisting the exhibition stay as Alaïa wished. Where his wishes were not yet known, Wilson felt he knew the designer well enough to interpret what he would have wanted.

So this is what we have; an examination of a relatively few pieces, separated by screens designed by Alaïa’s friends. And somehow, though it is beautiful it feels, excuse the phrase, cold and dead, not reflecting the joy of this happy man and the sexiness of his creations. 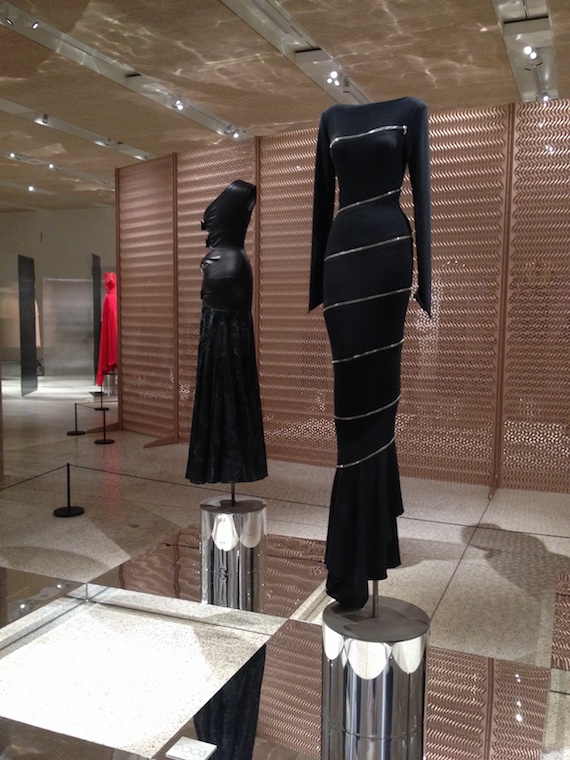 A dress directly inspired by Charles James’ “Taxi Dress”. Photo by Genevieve Jones with thanks to the Design Museum. 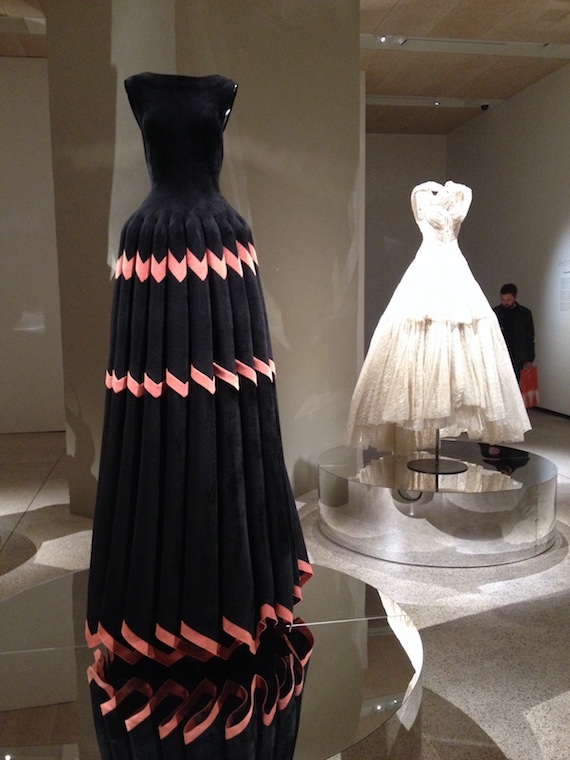 An interesting moulded dress made with wool felt. Photo by Genevieve Jones with thanks to the Design Museum. 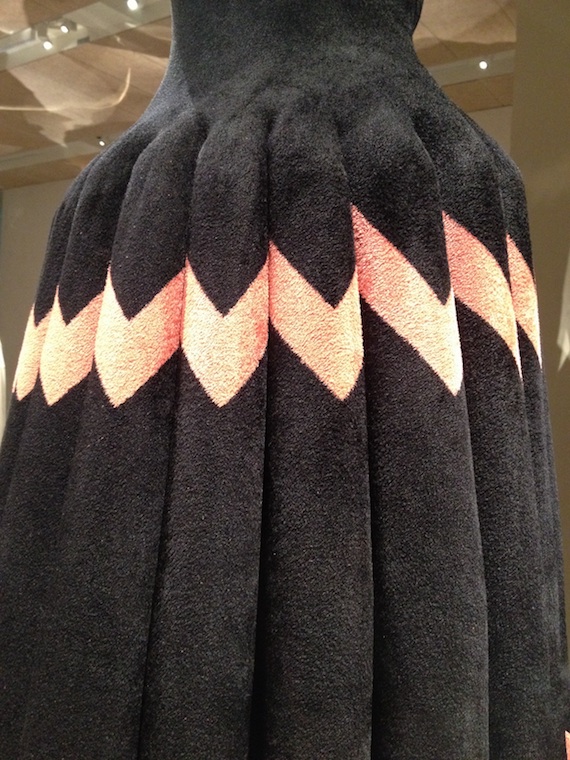 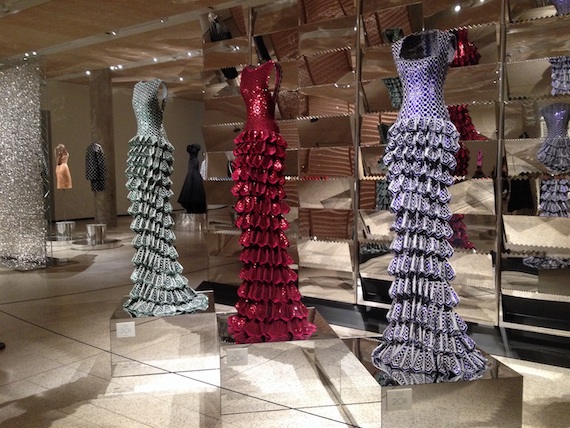 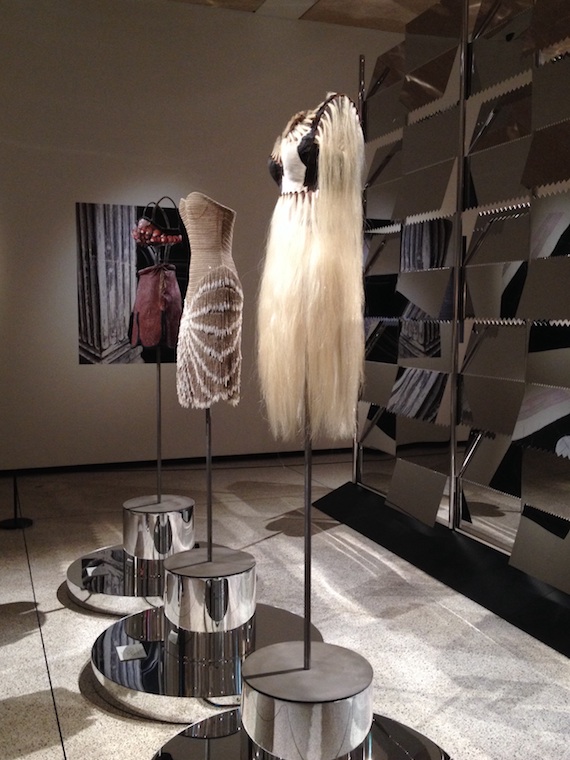 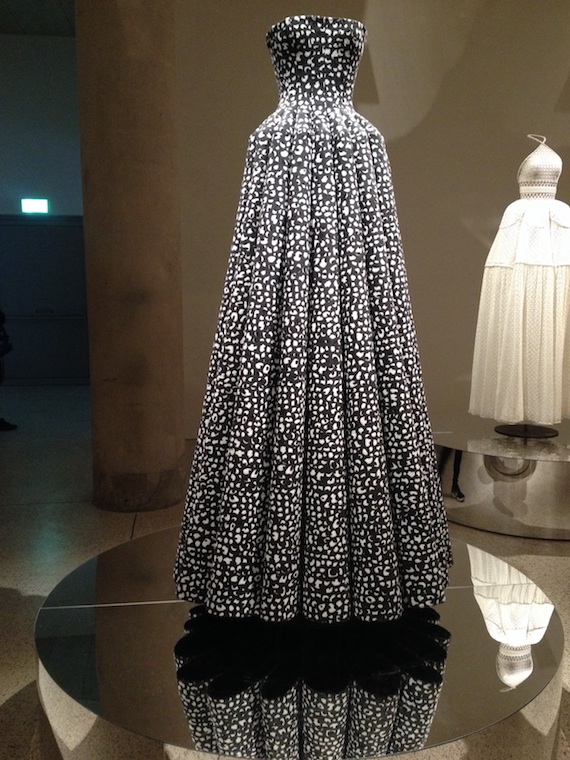 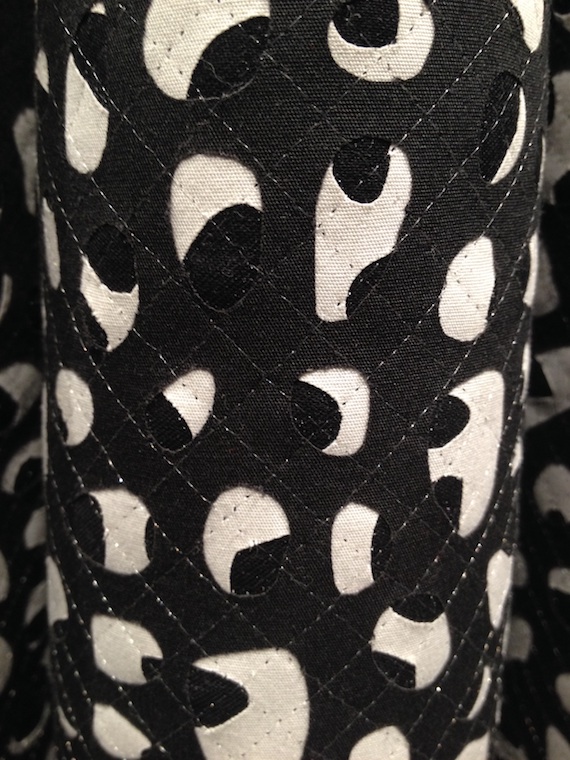 Azzedine Alaïa did not fit himself into the fashion calendar, preferring to present collections as and when they were ready and so these outfits aren’t presented chronologically. Instead, there are titles such as “Wrapped Forms”, “Other Places, Other Cultures”, and “Exploring Volume” along with the year the garment was made. To me, these titles fall rather flat. I was also quite surprised at “Wrapped Forms” – it alludes, presumably, to artworks such as Christo’s. But whereas Christo wrapped inanimate objects such as buildings, here the “form” is the female one. I’m not comfortable with a woman wearing a dress being referred to as a “wrapped form”.

Because of this, the show tried to suggest that each piece Alaïa made was timeless. But whether you argue that that his style followed fashion or pioneered it, these outfits are distinctly of their decade. Just as I was standing in front of some massively boxy-shouldered leather coats pierced with huge silver eyelets which screamed 1980s a woman stood next to me to look at them. “So timeless!” she parroted. “Look, you could wear that today!” I gave her some serious side eye. “To a fancy dress party, maybe” I replied in my head.

The section entitled “Other Places, Other Cultures” also probably wouldn’t fly that well in today’s climate. Loincloth-like skirts made with stingray skin along with shell encrusted bra tops, string-knitted dresses threaded, again, with shells, and cowhide and yak fur dresses seemed uncomfortably culturally appropriative. In addition, I’m not personally too fond of the use of the sting ray and real leopard fur that was seen elsewhere.

The presentation of each piece, on attenuated mannequins, is as elegant as a fashion sketch. So much so that I really wanted to climb up on the reflective plinths and compare my own height to that of the mannequins. I’m no supermodel but surely some of these pieces were way beyond human – even a tall tall, very slender human in platform heels? Some of the pieces had stretch but even so, knowing Alaïa had re-worked some creations in his studio for the show made me wonder if he had created impossible, superhuman forms. After all, he loved his 1990s supermodels so much, I wouldn’t put it beyond him to immortalise them with dress forms and clothes even more statuesque than they were. The result was unsettling but very beautiful. A collection of seven mannequins which greeted the viewer on entering the exhibition was incredibly striking.

Other pieces, though fantastical, were recognisably both human-sized and a little shop worn.  I’m willing to bet that these were the actual outfits worn by, for example, Tina Turner.

Screens have been commissioned to separate the space, mainly in glass or variously pierced metals. These have the effect of reflecting light, which is very pretty, but also sound, so, though the exhibition wasn’t busy the day I went, it was noisy with conversation.

Azzedine Alaïa has acknowledged the influence Charles James and Madeline Vionnet had on him. Here is shown a re-interpretation of Charles’s “Taxi Dress”, with a zip wrapping around the figure. You can also see Vionnet in the use of draping and fluidity.

Although Azzedine Alaïa was known as “The King of Cling” most of these outfits don’t focus on tightness. Very interestingly, many are concerned with volume. Not avant-garde volume, but traditional hourglass fitted top and volume from the hips or waist. The results are not at all what you would expect, particularly in the case of one ball gown which looked as if it were made from moulded felted and brushed wool. It fell almost seamlessly. In this and in many other pieces you could see the designer’s legendary attention to detail. His zips weren’t necessarily placed in an obvious spot such as centre back, but at an angle to fit with the cut of a skirt and the finish was immaculate. What appeared to be a black and white leopard print from a distance was composed of three layers of fabric, each cut in circles to show the other layers through and then quilted with invisible thread.

The show, however carefully mounted, seemed static. It didn’t really come alive for me until the very end, when I saw the short film from 1990 by Ellen von Unwerth. Suddenly, all the joy of Alaïa’s work was seen. We have often heard that he loved and idolised his models, finding inspiration in them, and with these candid shots from fittings and backstage this love and appreciation radiates from the tiny man with a fistful of pins who is tweaking the outfit of a muzzy-headed Naomi Campbell. Remarkable, too, is the way these women walk down a catwalk. With big grins, they fairly bounce down it, ruffling skirts and showing how beautiful the clothes are.

Also, don’t miss the series of photographs on the first floor showing photoshoots of the dresses.

Many have asked me if this show will tour, and I believe it is planned. I hope when it does, a little more life will be breathed into it. This is really worth seeing, but a looser version would be even better.

Azzedine Alaïa: The Couturier is at the Design Museum until 7th October 2017